LifeTown, a new 53,000-square-foot facility in Livingston, will provide recreational, therapeutic and educational space for children with special needs and their families. The project has resulted in the adaptive reuse of an abandoned warehouse on Microlab Road (below). — All images courtesy: Rotwein+Blake

Lance Blake recalls the day that Rabbi Zalman Grossbaum walked into his Livingston office with a grand design: Grossbaum’s organization, The Friendship Circle, intended to buy the empty warehouse next door and transform it into a 70,000-square-foot, state-of-the-art destination for teaching and supporting children with special needs.

There was just one problem — the warehouse was only 46,000 square feet.

Realizing that ground-up construction would be prohibitive, Blake and his team at Rotwein+Blake set out to fulfill the project with the building that was in front of them. Several years later, those efforts are now coming to fruition at the property just off Route 10, where The Friendship Circle is set to debut the long-awaited facility known as LifeTown.

“Every inch of this building is accounted for,” said Zalman, the organization’s executive director. “That’s part of the magic of it. Aside from that, it’s absolutely stunning.”

Thanks to an addition on the north side of the property, LifeTown will open its doors later this year with 53,000 square feet of new recreational, therapeutic and educational space. The facility on Microlab Road is projected to serve a population of more than 35,000 annually, including youths with special needs, their families and teenage volunteers.

In the process, the building will provide a new home for the nonprofit Friendship Circle, a faith-based nonprofit that has long provided its services from a hodgepodge of locations in the area. And it will be a source of pride for many of the prominent New Jersey real estate families that support the organization, including the Gottesmans, the Kushners and Halperns.

The same is true for Blake and his firm, which also hopes to replicate the model for other clients and other organizations going forward.

“It’s a concept that I think is getting a lot of buzz around the world,” said Blake, Rotwein+Blake’s president, noting that Friendship Circle has affiliations on multiple continents. “They’re all aware of what’s going on here and it’s something that could be replicated.

The centerpiece of the project is Life Village, an 11,000-square-foot section of the facility with shops, traffic lights and other elements of a downtown street, which is meant to teach children the skills to navigate, work and be engaged in a real-life setting. Many of the spaces — such a ShopRite, a Regal Bank branch and an RWJBarnabas Health doctor’s office — are sponsored and reflect the broad support for the project with the state’s business community.

The two-level complex also houses spaces such as a black box theater, a three-lane bowling alley and a gymnasium, plus an aquatic center with a therapy pool. Other key pieces of LifeTown will be a therapeutic play center that resembles an outdoor park, a teaching kitchen and different “tactile rooms” designed to stimulate the senses.

LifeTown also includes lounges for parents and volunteers, which Blake and Grossbaum say are every bit as important as the therapy and education spaces.

In creating the new building, Friendship Circle and Rotwein+Blake drew inspiration from an existing facility that Grossbaum’s friend, Rabbi Levi Shemtov, has long operated in Michigan. But they were intent on elevating the concept in every way.

“That’s where the idea came from, but we took the idea and we really expanded on it,” Blake said. “Not just in size and scale, but also in sophistication and technology.”

But it was equally important for the design to be efficient and cost-conscious, especially given that the project relies on fundraising and philanthropy. The team achieved that in part by including two multipurpose rooms that can be subdivided in multiple ways, while also cutting back the size of the administrative offices.

The development team, which includes Hollister Construction Services as construction manager, excavated roughly 7,500 square feet under the main level to create additional space for offices, storage and the bowling lanes, Blake said. On the same side of the property, they developed the lone addition to the building in the form of a new glass façade and entryway. 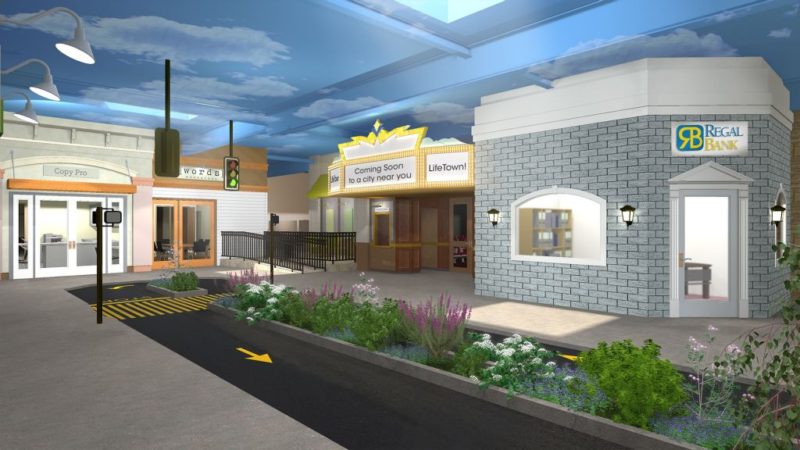 “It really made sense to make this the front entrance,” Blake said, “and it gave us the opportunity to create a nice volume of space and a real sense of entrance.”

Other parts of the exterior required some additional creativity.

“It was actually a challenge to develop the exterior because most of the facilities are kind of inward-exposed,” Blake said, so there was little need for glass or windows other than for the administrative offices. The team searched for a way to break up the façade and create a design that would reflect the children who would be using it, but also have a modern, tasteful feel.

The facility, which is directly adjacent to Rotwein+Blake’s headquarters, will likely draw visitors from all over the world when it opens. For Blake and his firm, the project was the first of its kind and one that he believes can be replicated as long as it’s financially viable for operators such as The Friendship Circle.

In the meantime, Blake won’t lose sight of the benefit of adding such a project to his firm’s portfolio.

“As an architect, it’s so fulfilling to learn when you’re working on something,” he said. “I’ve done components of this: I’ve done gyms, I’ve done pools, I’ve done play areas and multipurpose areas.

“I’ve never done a LifeTown village, but I’ve done retail,” he added. “Now it’s all packed into one facility.”