Denholtz Properties welcomed local officials on Wednesday mark the opening of a new 26,400-square-foot flex industrial building at 150 Tornillo Way in Tinton Falls, giving way to a groundbreaking at a second phase of the project across the street. — Courtesy: Denholtz

Denholtz Properties is adding to its vast portfolio of flex industrial space, having completed its first building in Tinton Falls as it marks the start of another in the sought-after submarket.

The developer, which is based in nearby Red Bank, welcomed team members and others on Wednesday to unveil the new 26,400-square-foot facility at 150 Tornillo Way. It did so with several tenants already slated to occupy the building, which is 82 percent leased, highlighting its location near Route 18 and the Garden State Parkway and the demand for such space.

“Although big-box industrial construction tends to dominate the industrial discussion, the flex-industrial asset class continues to be a crucial component of our regional economy,” said Steven Denholtz, CEO of Denholtz Properties. “Equidistant to both New York City and Philadelphia amidst a market experiencing constrained supply of modern industrial space, Tinton Falls represents our ideal target market for flex-industrial new construction.”

The firm on Wednesday also broke ground on a second flex building at the site, a planned 24,000-square-foot structure directly across the street at 151 Tornillo Way. Completion is slated for later this year.

“We’d like to thank the borough for their support in bringing our vision to life and enabling our firm to create two spaces where businesses will be able to thrive in Tinton Falls,” Denholtz said.

Located on seven acres, the two-building development is adding to a Denholtz portfolio that goes back decades, one that now spans New Jersey and Florida. The firm noted that phase one features 11 units, each with 1,920 square feet of warehouse space with 480 square feet of office space, along with dedicated drive-in and tailboards.

The building at 151 Tornillo Way will offer seven units ranging from 2,400 to 4,440 square feet, according to a news release. The structure will also include dedicated drive-in and tailboards, ensuring adaptability to a wide range of uses. 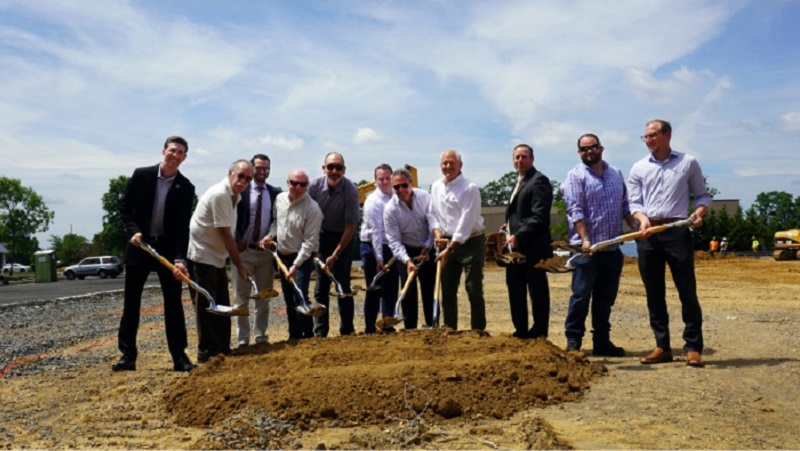