A rendering of The Station at Grant Avenue in Plainfield — Courtesy: J.G. Petrucci Co. Inc. and TD+Partners

A joint venture has broken ground on 90 new apartments in Plainfield, marking the second phase of a mixed-use project to redevelop a site that sat vacant for some three decades.

The developers, J.G. Petrucci Co. Inc. and TD+Partners, gathered Wednesday in the city’s fourth ward to highlight the project alongside local, county and state officials. When complete, the complex known as The Station at Grant Avenue will provide affordable housing for families within a five-story building offering one, two- and three-bedroom apartments.

“With this groundbreaking, the city of Plainfield continues our march of success,” Plainfield Mayor Adrian O. Mapp said. “Soon, this property — left blighted, vacant, and in environmental disrepair for the past 30 years — will become another pillar of our city’s economic and residential revitalization. Our dedicated administration is working hard every day to make Plainfield smarter, safer, and stronger for residents and this new housing for working families is just another step forward in our economic and cultural renaissance.

“I thank our development partners J.G. Petrucci Company and TD+Partners for continuing to serve as vital allies in Plainfield’s resurgence.”

The complex will rise alongside the first phase of the project, which resulted in a 44,000-square-foot facility for ABC Supply Co., a national wholesale supplier of building and construction products. With $40 million in total development costs, the project represents the fourth ward’s largest in more than 50 years. 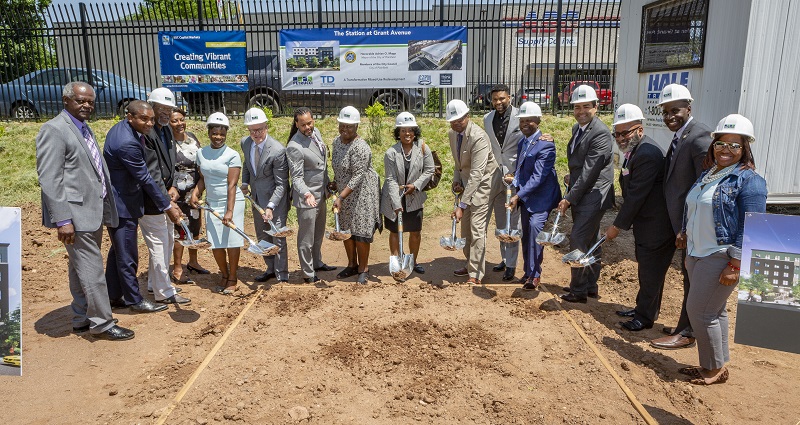 Funding partners for the project include the New Jersey Housing and Mortgage Finance Agency, Chase and RBC Capital Markets.

“This partnership is proof that the public and private sectors can work together to achieve a shared vision when the community’s interests are a priority,” said Greg Rogerson, principal of J.G. Petrucci. “The Station at Grant Avenue is part of a larger neighborhood revitalization effort in the Fourth Ward. Last year, in collaboration with the city of Plainfield, we cut the ribbon on Second Street Youth Center, an innovative childcare center that is delivering high quality early education to the community.”

Rogerson also noted that the ABC Supply project retained the company’s presence in the city, preserved more than 40 jobs and created an additional 15 permanent positions.

“The future of Plainfield is bright, and we’re honored to play a small part in its revival,” he added.

The Station at Grant Avenue will also include a fitness center and on-site parking for residents, whose units will feature stone countertops, hardwood flooring and Energy Star appliances including full-size washers and dryers.

“We are proud to continue our meaningful partnership with the city of Plainfield. Without the vision, commitment and leadership of Mayor Mapp, this new housing development would not be possible,” said Patrick Terborg, co-founder of TD+Partners. “This project is particularly significant because it builds on the robust redevelopment of the Fourth Ward, and it will provide hard working families in Plainfield with much-needed high quality housing that they can afford.

“We pride ourselves on developing projects that have a real and lasting impact on underserved neighborhoods. The Station at Grant Avenue exemplifies this intentionality and our values.”

Wednesday’s groundbreaking, which included a jazz performance from students of the Plainfield Academy for the Arts & Advanced Studies, also drew Union County Freeholder Sergio Granados and the city council. Also on hand were members of the financing team.

“The revitalization of The Station at Grant Avenue will bring needed high-quality housing to the city of Plainfield area residents, having a transformative impact on the local economy,” said Dave Walsh, Northeast regional manager for community development banking at Chase. “We’re thrilled to work with key local industry players to support community development.”