556 Morris Ave. in Summit, part of a 1.3 million-square-foot former Merck complex that was sold to Celgene Corp. in 2015, is one of several large life science campuses in New Jersey that were sold by brokers with JLL. Those sites are now on their way toward being repositioned. — All photos courtesy of JLL

For New Jersey’s business and political leaders, the news was all too familiar.

Hoffman-LaRoche’s announcement in 2012 that it would vacate its vast campus in Nutley and Clifton came after others — such as Merck, Sanofi-Aventis and Pfizer — delivered similar blows to their own host communities.

Amid mergers, downsizing and outsourcing, many of the firms that helped build the Medicine Chest of the World were now shrinking their footprints or leaving the state altogether, leaving behind blocks of hulking and often obsolete space.

But for all the fears of “white elephant” properties and the exodus of Big Pharma, developers and brokers have managed to right the ship in many cases. Several of New Jersey’s largest, most prominent life sciences complexes are now on the path toward redevelopment, with new anchor tenants in place or new owners that can reclaim the value of what was left behind.

In the most high-profile cases, a team at JLL has been right in the thick of it.

Brokers and other experts in the firm’s New Jersey offices have developed a knack in recent years for selling the state’s largest pharmaceutical campuses. Those assignments include the sale and repositioning of the Roche campus in northern New Jersey and the Sanofi U.S. research campus in Bridgewater — which were each about 1.2 million square feet — along with two large dispositions for Merck & Co.

Dan Loughlin, the firm’s New Jersey broker lead, said the assignments go beyond the typical capital markets sale, where a firm puts out an offering memorandum and then has a buyer in hand 60 days later. It’s why as many as two dozen different JLL team members — from project managers to utility experts to incentives experts — have played a role in the deals.

“It takes a lot more finesse,” said Loughlin, an international director with JLL. “It takes some patience, it takes some strategy and you need to convince the client that they need to have this patience to wait out the strategy to implement the highest-and-best-use disposition.

“So convincing Sanofi or Merck or Roche to be a landlord was probably the biggest hurdle, but I think we … had a track record of doing it, so I think all of them came around to being open to it. And you can’t do that in an (offering memorandum) — it’s not a capital markets investment sale process.”

That strategy is already bearing fruit with the former Sanofi campus in Bridgewater, which was shuttered in 2011 as part of a reorganization by the French drug maker. In 2013, JLL announced that it had inked leases with Amneal Pharmaceuticals and Ashland Specialty Ingredients to begin to repopulate the space.

Later that year, Sanofi sold the campus to a joint venture of Advance Realty and CrossHarbor Capital Partners, which have since attracted Nestlé Health Science as a new anchor tenant at the site and are now on-track to create a mixed-use redevelopment there.

“We had to create some multitenanted leasing activity in order to sort of expedite the sale of the property,” Loughlin said. “And with the way the property was originally designed, we had a vision of what it could be redeveloped into and we were able to prove that out by getting two early leasing commitments that enabled us to sell the property to Advance. “And they have since, in my opinion, really implemented the vision that we laid out for the property when we sold it to them.”

A success like the Sanofi campus, now called the Center of Excellence, is a ray of hope in a state that has struggled with office vacancy. A report last year by PlanSmart NJ identified 339 “stranded” retail and office parks in New Jersey, a term based on prolonged periods of high vacancy. The average stranded asset is about 130,000 square feet, the research found, while determining that one out of every three municipalities houses such a property.

The news can seem especially bleak when it comes to the life sciences sector, given its size and legacy in New Jersey. But Loughlin said the sprawling pharma campuses that JLL has sold in recent years have been tailor-made for redevelopment.

“What they have in common is that they’re all well-located,” Loughlin said. “They have a lot of above-standard infrastructure associated with them because they were corporate-funded, most of them, and there was a lot of value that was left behind that somebody else could take advantage of, who probably in some cases wouldn’t be able to afford it.”

“Look at Roche in Nutley,” Jenco said. “It’s completely developed … and now you have this large block that’s sitting there that’s kind of an island, where you’ve got a creative opportunity for a developer with a vision to say, ‘You know what, this is what we can turn this into.’ ”

The JLL team has found repeat business with Merck, which has both shifted its headquarters and shed several of its Garden State properties in recent years. As of late January, the company was under contract to sell a vacant 1 million-square-foot, R&D campus in Union that sits across the street from both Kean University and an NJ Transit rail stop.

The buyer, Russo Development, is expected to put forth a sweeping redevelopment plan for the property. Some 10 miles away in Summit, JLL represented Merck in the sale of a separate, 1.3 million-square-foot research campus to Celgene Corp., a fast-growing biotech giant based nearby.

Loughlin said the Summit property had “developed some real interest” from investors who saw its potential as a multitenant facility. That ultimately helped Merck in the deal with Celgene, but it also shows that “luck is a very important factor in our success.” After all, it’s not every day that Merck would find a buyer in a related industry — headquartered less than three miles away — with both the growth trajectory and the wherewithal to absorb the property.

And with the threats to the tax base of each host community, Loughlin said local officials have become increasingly open to the types of proposals it takes to reposition such a site.

“(They) realize that they need to be accommodating, they need to be open to some of those highest and best uses, whether it’s going to be residential or some other alternative use, or multitenanting it,” he said. “And (they’re) providing the right accommodation and flexibility that the developers or some of the new buyers require to make these sites work that were originally designed for that.”

Of the buyers — at least in the case of the Merck site in Union and the Roche and Sanofi properties — Loughlin said there are also common threads. For one thing, they’re experienced in different types of asset classes, so they “have a level of comfort that they can underwrite all of those things and they’re comfortable with the demand side of all those things.”

“And they’re all local,” Loughlin said. “They know the New Jersey market. We had a lot of people from out of state looking at these, but they couldn’t get their hands around the market, because it’s complicated.”

Next up: Whitehouse Station

For all of its success in finding buyers for the state’s largest pharmaceutical campuses, JLL still has one very tall task on its hands. 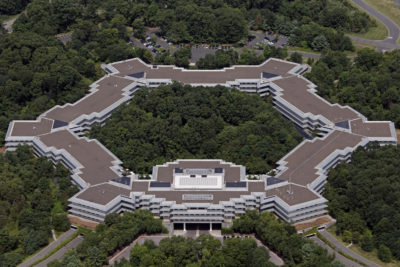 The firm is now marketing Merck’s former global headquarters site in the Whitehouse Station section of Readington, a 25-year-old, 1 million-square-foot complex with a distinctive hexagonal shape. Loughlin said JLL’s approach, “because of the size and scale of it and the grandness of it,” is to look for a corporate occupier for a portion of the property that will allow it to be repositioned.

Merck is “willing to be a landlord under the right circumstances to enable leasing activity there,” Loughlin said, adding that it would have to be a credit tenant and a “decent-sized deal.”

He admits it won’t be easy, given the site’s location in rural Hunterdon County. Attempts by other firms to sell the campus have run into roadblocks and false starts.

“No question about it, it’s a challenge,” Loughlin said, but said the property would allow a user to draw labor from Pennsylvania, while offering a site “that’s got redundant infrastructure and is built at the highest quality.”