A state pilot program has made it notably easier and notably more lucrative for commercial landlords in New Jersey to join the clean energy movement, allowing solar developers to lease their rooftops and sell power to nearby residents.

For companies such as Solar Landscape, the opportunity was as clear as day.

“Just like flying into Newark and seeing huge warehouses with no solar on them, the writing was on the wall,” said Shaun Keegan, co-founder and CEO of the Asbury Park-based solar developer. “It made a lot of sense, so we put a lot of resources into leasing those roofs.”

Solar Landscape has done more than simply seize the opportunity. It has become a key player with a visible presence in New Jersey’s commercial real estate industry, having leased more than 20 million square feet of rooftop space from some of the state’s top property owners. The firm also boasts the largest share of projects under the Community Solar Energy Pilot Program, launched in 2019 under Gov. Phil Murphy, as the state prepares to expand capacity and adopt permanent rules for the clean energy platform.

Equally important: Solar developers and local landlords have only scratched the surface in this area. Estimates say that just 4 percent of all rooftops larger than 100,000 square feet in the state have solar panels, the company says, in a time when real estate firms are increasingly focused on sustainability. Not to mention the fast-growing opportunity in other states, many of which have mimicked New Jersey’s Community Solar program, along with new federal incentives under the Inflation Reduction Act.

“We’ve got a lot on the sideline waiting to get into the next program, and we’re not the only ones,” Keegan said, adding that “there’s a ton of excitement around it with real estate owners,” who see the chance to shrink their carbon footprint while capturing new rental income.

With more than 120 employees, Solar Landscape currently generates about 75 percent of its revenue from community solar projects, in which it leases rooftop space for its solar panels and sells energy directly to consumers. Under the state program, more than half of the power generated must go to low- and moderate-income households.

While it’s now a major owner of solar — its portfolio includes roughly 100 megawatts, representing some $200 million in investment — the company’s roots are as a general contractor and installer for other developers, with a focus on so-called behind-the-meter projects at public schools, big-box stores, brownfields and other locations, in which the solar power generated is consumed by a user on site. Keegan, who pivoted from a career in criminal law, teamed with electrician and childhood friend Corey Gross to launch the firm in 2012, spending their first three years working for other solar developers.

In 2019, the pair brought in longtime friends Clayton Avent and Mark Schottinger as additional partners, gaining additional expertise in energy and finance.

Its pipeline to that point was largely driven by New Jersey’s Solar Renewable Energy Certificate or SREC program, in which owners of power-generating solar arrays could sell credits to utilities and suppliers, allowing the providers to satisfy state mandates for clean energy. But the market was prone to volatility and price fluctuations over time based on supply and demand, prompting Solar Landscape to secure work in neighboring states as it continued to fill its pipeline in New Jersey.

The firm, which would become a solar developer in its own right, was positioned for further growth when Murphy took office in 2018, touting an ambitious agenda for clean energy. The governor signed legislation in May of that year that mandated the creation of the Community Solar Energy Pilot Program, for which the state Board of Public Utilities adopted rules in early 2019.

That represented a critical change in how solar projects would be developed in the state. As Keegan noted, the panels previously had to the power buildings on which they were installed, creating another layer of complexity between landlords and tenants that had to be negotiated in their lease. It was not worth the trouble for many building owners, Keegan said, but the state program allows solar developers to bypass the landlord-tenant relationship by sending power directly to the grid.

“Now, it has nothing to do with the tenant or the underlying user,” Keegan said. “So the program opened up the landlord tenant space because, previously … you had to make both parties happy in order to do solar.”

Securing financing also meant knowing who was going to buy the power for the long term, he said, adding that the lease terms of a building “usually didn’t match the useful life of the solar system, so that was the big challenge to doing solar.”

Importantly, the requirement that developers sell 51 percent of the power to lower-income residents was another key consideration as Solar Landscape and its competitors raced to participate in the pilot program. The first application period opened in April 2019, giving developers five months to line up specific locations and property owners that would lease their roofs.

“What they really want to see is projects that are likely to succeed, technically,” Keegan said. “So you have a sound lease, you’ve got a good building, you’ve done your engineering due diligence and it’s a good site for solar. And then, from a subscriber standpoint — buying the energy — they want to see that you’ve got those ties to local communities.”

In December 2019, the BPU granted conditional approvals to 45 community solar projects comprising nearly 78 megawatts, enough to power an estimated 15,500 homes. Solar Landscape, for its part, secured the right to build 20.35 megawatts across eight projects, including four industrial buildings owned at the time by Duke Realty Corp.

The companies in January 2021 joined Murphy and BPU officials at one of the sites, in Perth Amboy, to unveil the first completed community solar project in the state.

“They took the leap and gave us a large portfolio,” Keegan said of Duke Realty, which has since been acquired by Prologis Inc.

Keegan noted that all eight of the firm’s solar projects under year one of the pilot program are online and powering more than 3,000 New Jersey households, half of which are low- to moderate-income. And it’s taken an even larger role in year two, with plans to deliver another 46 projects that would generate another 50 megawatts at full build-out, or enough to power some 8,000 New Jersey households, as part of a 165-megawatt allocation by the BPU.

Solar Landscape recently marked another milestone: the completion of state’s first project under year two of the program, at an Extra Space Storage facility in Neptune, in the first of what will be 10 projects in New Jersey with the self-storage company. And it has delivered roughly half of its projects under year two, he said, all of which are approved for interconnection and will connect to the grid once transformers become available.

“The first two years of the pilot, we think, were a huge success,” Keegan said. “And the excitement isn’t only from industry participants, but from the organizations that support low-income communities.”

Still, many landlords are just now getting comfortable with the idea of putting solar panels on their roofs. Solar Landscape has worked hard to make that so, becoming a platinum sponsor of NAIOP New Jersey in recent years and a fixture at key commercial real estate events. Its case is bolstered by the growing focus on sustainability and so-called ESG standards — short for environmental, social and governance — across corporate America and other segments of the economy, including real estate.

“I think they are showing their value, especially in this day and age with the sustainability movement,” NAIOP New Jersey CEO Michael McGuinness said. “ESG is foremost in a lot of folks’ minds, including the folks that are providing the financing for these deals. And the tenants themselves are looking for more of these things. They’d rather be in a facility that is helping to mitigate the adverse impacts of energy use by using solar.”

Institutional investors also loom large in ESG discussions, Keegan said. That’s most apparent as merchant builders become increasingly comfortable with rooftop solar, seeing the opportunity to add value and increase the rent roll for pension funds, insurance companies and other would-be buyers that are more focused on sustainability. And ESG platforms are also now common among publicly traded real estate investment trusts such as Prologis, the world’s largest industrial owner, and locally based private owners such as Sudler Cos., Elberon Development and others.

“Sometimes we go to the asset manager or those that are concerned with the rent roll, and other times we deal with the ESG person,” Keegan said. “You can get interest from either side of the house.”

The BPU has yet to release its final rules for Community Solar, but plans to issue a straw proposal for the permanent program by year-end, agency spokesman Peter Peretzman said. That will come as the brand of community solar pioneered by New Jersey spreads to other states, at least a half-dozen. In late September, California Gov. Gavin Newsom signed a law that also allocates 51 percent of the energy to lower-income households.

“The drive to reach individuals who fall into the low- and moderate-income category really began here in New Jersey,” Keegan said. “And now other states are imitating.”

Keegan pointed to the impact of the Inflation Reduction Act, which President Biden signed into law in mid-August and includes expanded benefits for renewable energy projects supporting lower-income users. The industry at large is still awaiting guidance from the federal government, Keegan said, but the measure has already caused additional property owners and institutional investors to take notice.

“The biggest thing is that now we have a 10-year runway and certainty of what the incentive will be from the federal side,” he said. “And that’s the longest by (two times) since I’ve been in the industry.” 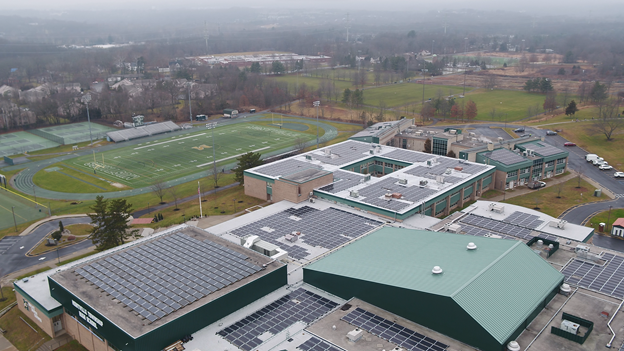 In the meantime, Solar Landscape continues to grow its footprint in sectors such as education, having worked on 31 public and private schools for a total of 16 megawatts to date. They include six public schools in Montville, under a 15-year solar power purchase agreement that enables the district to install the panels at no cost and purchase the electricity it generates at guaranteed discounts every month.

In an early February announcement, the company and school officials noted that the panels will generate 1.84 megawatts yearly and reduce the district’s total power bill by nearly $1 million over the next 15 years. The project has also allowed Solar Landscape to provide educational programming about clean energy and climate change.

“By using solar energy, we’re now making good use of an untapped asset: our buildings’ roofs,” said Katine Slunt, the business administrator for Montville Township Public Schools. “Now, we can be even better stewards of our financial resources and lead our students by example in the fight against climate change.”