CHA Partners has broken ground on The Royal at Bloomfield Station, a mixed-use project that will include 210 apartments, 14 two-story brownstone units for sale, 7,000 square feet of retail and restaurant space and a municipally owned parking garage with about 300 spaces. — Courtesy: CHA Partners

A developer has kicked off the third and final phase of a project in downtown Bloomfield, where plans call for more than 200 new apartments and retail and restaurant space.

The locally based firm, CHA Partners, broke ground this week on what’s known as The Royal at Bloomfield Station, which will rise at the corner of Ward Street and Bloomfield Avenue. Slated for occupancy in mid-2023, the property will ultimately include 210 apartments, 14 two-story brownstone units for sale, 7,000 square feet of commercial space and a municipally owned parking garage with about 300 spaces.

The milestone follows CHA’s success with Bloomfield Station, a 224-unit property that marked the town’s first redevelopment in more than three decades, and a subsequent 176-unit project known as Six Points at Bloomfield Station.

“We pride ourselves on becoming true partners to municipalities, and our redevelopment efforts in Bloomfield represent a prime example of our ability to work collaboratively with township officials to deliver exciting projects that will serve the region for many years to come,” said Bill Colgan, CHA’s managing partner. “As we continue to execute on our vision for this project, we are thrilled to play a significant role in Bloomfield’s evolution as a thriving live/work/play destination.” 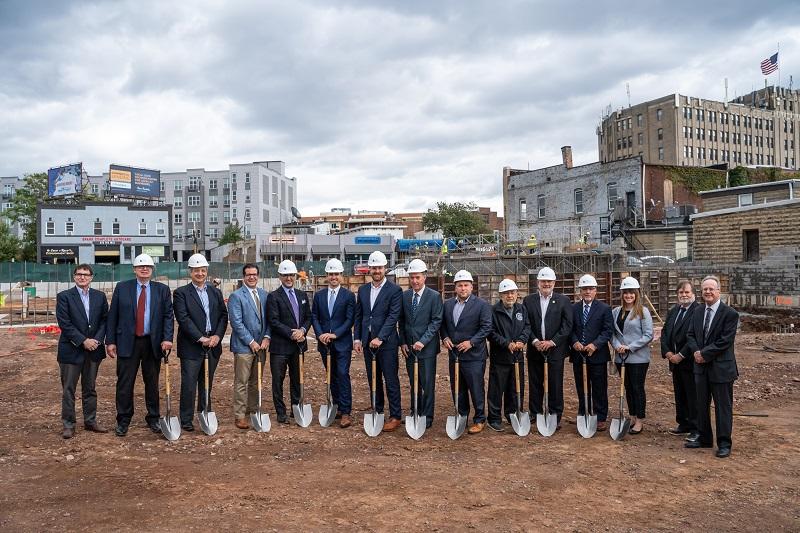 CHA recently welcomed Bloomfield Mayor Michael Venezia for a groundbreaking ceremony, noting that it assembled the project site by acquiring seven contiguous parcels and negotiated a series of public-private partnership agreements with the township. The Royal, a 372,000-square-foot project, will be steps from Bloomfield’s train station, which has been key to a plan to create a booming town center in the central business district.

Amenities at The Royal will include lounge areas, a high-end fitness center, a rooftop entertainment area, an automated package and several multipurpose event rooms, among others. Residents will also benefit from Bloomfield’s growing mix of restaurants, shops and recreational options.