By Morris A. Davis

When I was at the Federal Reserve Board, the staff economists would meet routinely to discuss the forecast and the possible risks to that forecast. In the spirit of talking about risks, I would like to discuss the possibility, causes and consequences of negative nominal short-term interest rates. To be clear, my expected forecast is for nominal interest rates to stay positive and to rise over time, but there are risks to this forecast. Even after accounting for the fact that interest rates and expected inflation jumped after Donald Trump’s election, I would guess there is a 20 percent possibility that short-term interest rates become negative in the next two years.

To explain the nature of these risks, I need to briefly review what’s known as the Fisher equation, which states that a nominal interest rate is equal to the inflation rate plus the real, inflation-adjusted rate of return. On average, in 2016 the one-year nominal Treasury rate was about 0.60 percent and the one-year rate of inflation was a little more than 1.6 percent. So, a ballpark estimate of the real one-year risk-free rate in 2016 is about negative 1 percent.

Most economists think the Federal Reserve will eventually increase nominal interest rates because the real risk-free rate is at a historically low value. To understand their reasoning, see the graph below. For the past 55 years, the average real one-year risk-free interest rate in the United States (the black line) has been about 2 percent per year. 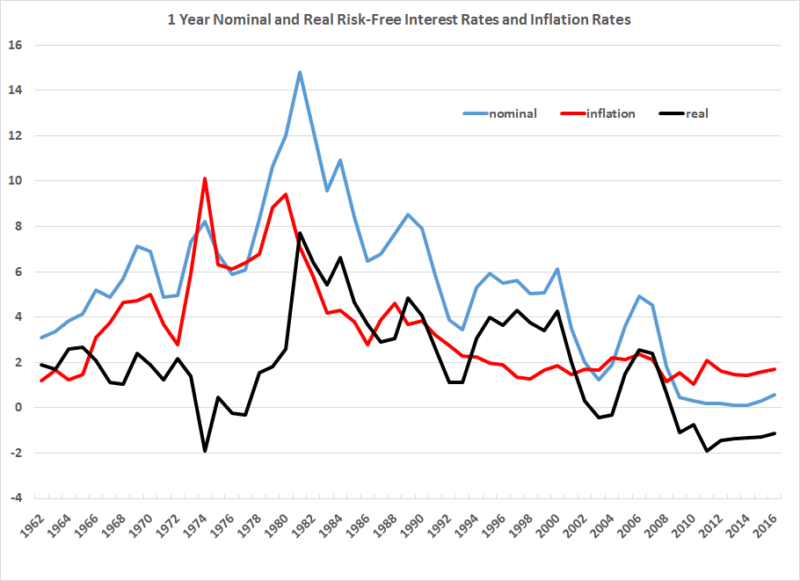 So, what is wrong with this thinking and why might nominal interest rates fall to negative values now? The key assumptions that are in play are (1) the real one-year risk-free rate will return to 2 percent in the near future and (2) the Federal Reserve can set interest rates independently of interest rates in the rest of the world.

Let’s question these assumptions one at a time, starting with (1) that the real one-year risk-free rate should return to its average value of 2 percent soon. First, most statistical models of real interest rates suggest they are approximately a “random walk,” meaning they are as likely to fall in the short term as they are to rise. If inflation holds steady, the Fisher equation tells us that a decline in the real rate can only occur if the nominal rate falls. Second (and related), according to the National Bureau of Economic Research, our last recession ended in June 2009.

Expansions typically last about eight years. If history repeats itself, we are due for another recession soon and the Federal Reserve will have no choice but to lower the nominal Federal Funds Rate (an overnight rate linked closely to the one-year Treasury) to a negative value.

Finally, as shown in the graph, since the mid-1990s, inflation has been constant — but both the nominal and real one-year interest rates have declined. What evidence do we1 have that this 20-plus year trend will suddenly reverse?

The answer to that last question is: None. My guess is that the emergence of China as a major trading partner has pushed real interest rates down in most developed countries since the mid-1990s. China’s policy of exporting manufacturing goods and acquiring foreign assets in exchange has driven up asset prices and lowered bond yields. As an example, you may be able to relate to, China’s thirst for real estate in New York, New Jersey and other major markets has reduced cap rates on properties. The same forces are at play for mortgage yields and yields on the one-year Treasury. Assuming China and other foreign buyers continue to export goods to the U.S., and thus continue to have a healthy appetite for U.S.-based assets, we should not expect real interest rates to rise. In other words, if foreigners like U.S. assets and want to buy them, why would we expect this to change?

And this returns us to questionable assumption (2), that the Federal Reserve can set the Federal Funds Rate independently of whatever is going on in the rest of the world. If foreigners want to own U.S. Treasuries, interest rates on Treasuries will be low. Additionally, the European Central Bank and the Japanese Central Bank have both adopted a policy of slightly negative interest rates. It seems implausible that the Federal Funds Rate can stray too far from European and Japanese rates for too long a period.

In other words, the Federal Reserve may not be able to raise rates: The rest of the world may have put the Fed in a low-rate box.

Some people have asked me what this all means for real estate. After thinking through all the possibilities and paths, my best guess is that real estate prices are going to be flat or fall in the future, even if interest rates decline further. Suppose there are four possible outcomes in the future, organized into two possible interest rate paths (rise and fall) and two possible rent growth realizations (weak or strong).

I view the most unlikely scenario as one with declining interest rates and strong rent growth. Strong rent growth is associated with a booming economy, which typically is not associated with a decline in interest rates. This is the only scenario unambiguously producing a real estate boom. The other scenarios seem to me to be more likely to occur, and the impact on real estate valuations in each of these scenarios is ambiguous at best.

Let me conclude with three points you can take away. First, my expected forecast is that nominal and real interest rates will rise. Second, there is a nontrivial risk that interest rates will fall: Interest rates are hard to predict and are low in other countries — and the probability of a recession is higher than usual. Third, regardless of what happens to interest rates, my best guess is that real estate prices will be flat or will fall in the future. And for the record, I would be happy to be wrong about that.

Morris A. Davis, PhD., is the Paul V. Profeta chair in real estate and academic director at the Rutgers Business School Center for Real Estate.