A new public park has opened in Jersey City, serving as a focal point for thousands of apartments that have helped revive a depressed industrial area near the Holland Tunnel.

Mayor Steven Fulop joined fellow city officials, community members and the Manhattan Building Co. last week to unveil the 1.5-acre space, known as Coles Park, after a $2.5 million investment by the developer. The stakeholders celebrated both the completion of the park and the fact that it was built at no expense to taxpayers, under the terms of an agreement with MBC, bringing new playgrounds, dog runs, greenery, artist works and event space to a stretch of Coles Street between 16th and 18th streets.

“This park is a testament to our commitment to expand open recreational space in all neighborhoods while moving development beyond the waterfront in a public-private partnership that simultaneously ensures the surrounding community benefits most,” Fulop said. “We’re the first administration in decades to build brand new public schools and public parks at no cost to Jersey City residents. Coles Park offers more than outdoor recreational space: It includes flood mitigation, security features, over 70 tree plantings and an amphitheater to foster community with free special events.”

Sitting just south of Hoboken and west of the Holland Tunnel, the park has transformed vacant land at the center of a burgeoning redevelopment area. MBC has delivered nearly 800 apartments since 2013 and had another 350 under construction when it broke ground on the park in late 2019, while neighboring projects have brought hundreds of additional units to the neighborhood. 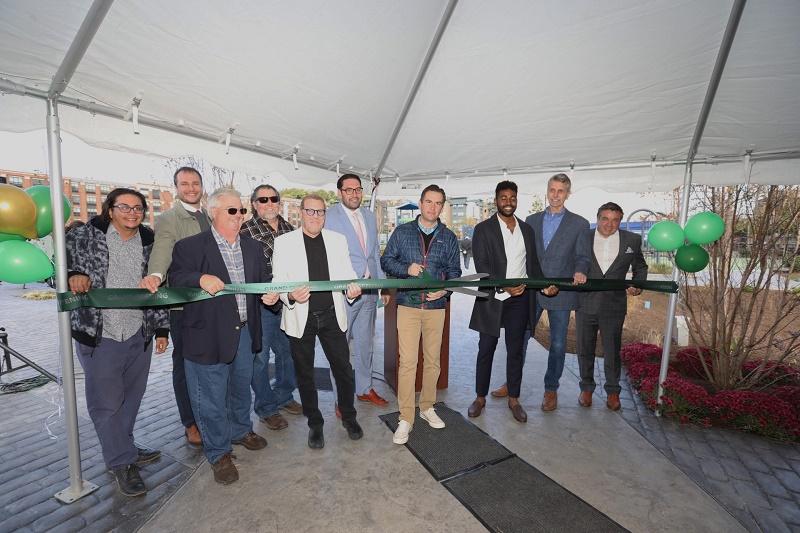 Coles Park includes four sections for passive use, according to a news release. The northwest section of the park contains an enclosed 5,000-square-foot playground for varying age groups, complemented by a separate swing set play area, while the northeastern section contains two dog runs.

Meantime, the park’s southeast corner consists of open green space, featuring two mature Jersey Red Oak Trees, wildflowers, sculpture artworks and decorative lighting, the news release said. A second phase of the park calls for the completion of an oval, three-tiered amphitheater for local concerts and community events in the southwest section, with a design that includes pervious pavers over a thick layer of clean stone to add storage volume and reduce storm runoff.

“We are proud to formally announce the completion of Coles Park,” said Sandy Weiss, president of Manhattan Building Co. “This park is exactly what the residents of the neighborhood need and deserve. We are grateful to have a forward-thinking administration that recognizes the need for preservation of open space, especially in an urban setting.”

City officials pointed to an environmentally friendly design that will help prevent future flooding. To that end, the intersection and entire park have been elevated to reach above flood elevation, while the space includes a bio basin to promote filtration back into the groundwater.

Additionally, the entire park is crisscrossed with underdrains encapsulated in clean gravel to eliminate runoff.

With new community on the rise, Weiss has his eye on another large Jersey City redevelopment