Seeking to slow the spread of COVID-19, officials in New Jersey and neighboring states have ordered the shutdown of all non-essential retail businesses. The mandate has left retailers and their landlords scrambling to deal with the fallout.

New Jersey shopping centers that once buzzed with a steady hum of activity have been quiet since late March, with most retail businesses shut down to contain the spread of COVID-19.

“It’s a ghost town,” said George Jacobs, president of Jacobs Enterprises Inc., which owns the property, during an interview in early April. “We’re getting slaughtered.”

In his 46 years in real estate, he said, this downturn is the worst ever. He and other retail landlords are scrambling to figure out how to deal with tenants who say they can’t pay rent because their revenue streams have stopped cold. The coronavirus has not, of course, ended landlords’ financial obligations, including mortgages, taxes and operating expenses.

Worse yet for landlords, the COVID-19 quarantine comes at a time when many brick-and-mortar retailers were already in jeopardy because of competition from online shopping.

In the immediate crisis, landlords are taking a mix of approaches.

“Every retail center is experiencing pain, and landlords are trying to mitigate that pain any way they can,” said Adriana Peters, a commercial real estate lawyer with Chiesa Shahinian Giantomasi PC in West Orange.

Some have offered rent discounts for a month, or several months. Some are deferring rent for a month or two, and expect to be paid back over time. Others are telling trusted tenants that they will apply the security deposit toward the rent, Peters said.

And many have held off taking any action while they wait for more information about when the quarantine will be lifted or what government aid will be available to business, Peters said.

“It’s wise in many cases for the landlord to take a wait-and-see approach and gather as much information as they can before they commit to anything with their tenants,” she said, adding that landlords’ approaches will also vary depending on the tenant. For example, she said, the owner of a strip center might give concessions to a struggling mom-and-pop, but not to the supermarket that has remained open.

“It’s going to be one step at a time, one tenant at a time,” she said. She also recommended that landlords reach out to their tenants, especially small tenants, and alert them of any government aid they might qualify for.

Jacobs, who teaches at the Rutgers Center for Real Estate and is the government relations co-chair for northern New Jersey for the International Council of Shopping Centers, said he’s been trying to work out agreements to defer rents.

For example, his company also owns the Summit Opera House in Summit, a mixed-use, adaptive reuse of an 1894-vintage building. One of the tenants is the restaurant Winberie’s, which has closed. Jacobs agreed to defer the rent for the next three months, and allow the restaurant to pay it over its 10-year lease.

But other Jacobs Enterprises tenants have said, in essence, “We’re not paying — sue us.”

“Many are saying, ‘I’ve got no money. I’m broke — you’ll be lucky if I come back after the quarantine,” Jacobs said.

Chuck Lanyard, president of the Goldstein Group, a real estate brokerage firm in Paramus that specializes in retail space, said that some landlords want to replace tenants who aren’t paying. But that’s not easy. For one thing, COVID-19 has shut down most court activity in the state, so they can’t go to court to start evictions.

Even if they could get rid of a nonpaying tenant, Lanyard said, landlords might end up carrying an empty storefront for months, and then have to pay brokerage fees and concessions to get a new tenant.

“Landlords are going to have to do their best to keep their tenants in place,” he said.

The COVID crisis comes during a long, bumpy period of realignment in the retail industry, as online shopping takes a greater share of the market.

“We were struggling with e-commerce to begin with, and changing our tenant mix when the opportunity arose,” said Jacobs, whose Styertowne Shopping Center sits at the normally busy intersection of Route 3 West and Bloomfield Avenue.

For example, some retailers have been replaced with restaurants, gyms and medical offices at many shopping centers — services that can’t be obtained online. However, gyms have been shut down by COVID, and restaurants are only allowed to offer takeout and delivery in New Jersey. 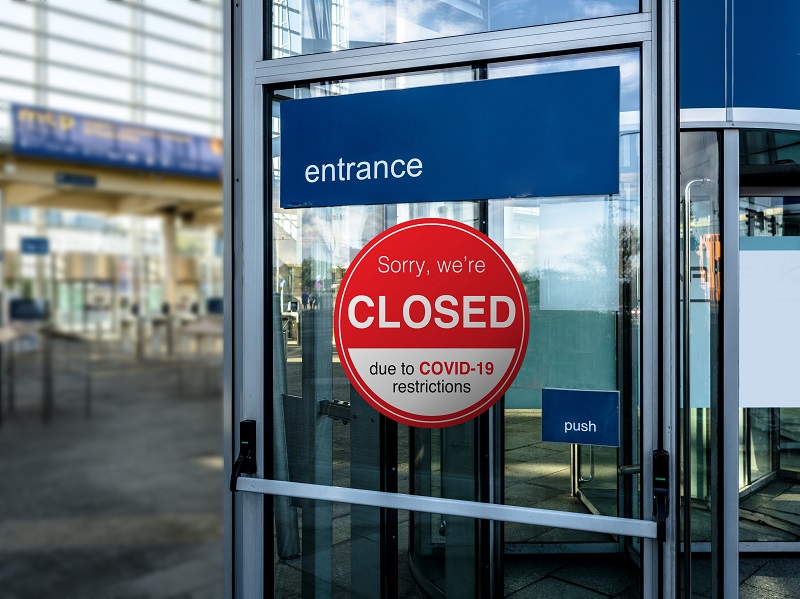 With COVID restrictions keeping them out of the stores, more people are shopping on the internet, and observers say they may continue making most purchases online even after stores open again.

“Everybody is being taught to order online,” Jacobs said.

Property owners can turn to lenders for help, but there’s no obligation for them to act. And, Peters said, since banks are highly regulated, they might not have the leeway to give landlords a break. In fact, she said, lenders might have a problem with landlords who give their tenants rent concessions, because that could breach the loan agreement.

Some retailers may not survive the COVID-19 quarantine, especially those that were already in danger.

“Those who were riding a fine line already are going to be pushed over the edge,” Peters predicted.

But she is more optimistic about the survival of shopping centers, in part because many lenders had already gotten more conservative about lending on retail properties after the 2007 to 2009 recession, demanding that property owners have more reserves than in the past.

Other insiders were similarly optimistic when it came to newer retail centers with strong locations and durable tenants. JMF Properties, a Whippany-based developer, in recent years has lured anchor tenants such as Whole Foods, Costco and Lowe’s to projects in Parsippany, Bayonne and Hanover Township. Those operators have been deemed essential and allowed to operate during the outbreak, which bodes well for the long-term recovery of those properties.

“It’s no secret that this is going to be a difficult month and a difficult quarter for everyone, but overall I think this is going to be a short-term problem, more like a blip on the radar than anything with a long, sustaining impact on the industry,” said Joe Forgione, founder and principal of JMF Properties. “I believe that there is going to be pent-up consumer demand when we open up the economy again and that will allow our tenants, and retail in general, to return back to normal quite quickly.”

Forgione is also taking that view when it comes to its development pipeline, which includes large retail projects in places such as Eatontown and the Whippany section of Hanover.

“We’re not holding back on any of our development plans,” he said. “We believe there is still a lot of potential for shopping centers in New Jersey that offer the right retail mix in the right location.”

Lanyard said that enclosed malls may be slower to come back than other retail properties.

“I have genuine concerns for malls, which had been hit anyway,” Lanyard said. “People are going to be a little concerned about going into large venues” where they might be surrounded by crowds. He said that American Dream, the massive retail and entertainment property in the Meadowlands, will have to find a way to bring people back.

Similarly, Peters expects a slow return to normal for restaurants and entertainment venues.

For one thing, unemployment has soared, and consumers who have lost their jobs won’t be spending freely. Moreover, governments may limit the number of people allowed in one place at a time, such as by letting restaurants use just half of their tables to keep people apart. Beyond that, many customers may be leery of going out to see a movie, eat or drink.

“You’re sitting or standing right next to people in restaurants or bars,” Peters said. “Somebody who is being cautious is not going to want to do that.”

But Lanyard is hopeful that eventually, business will rebound. As of early April, he was working with about 10 companies — mostly restaurants — that were planning to open in Paramus, and so far, no one has walked away. He expects that, after a delay caused by the quarantine, those deals will go forward.

“After being shut in,” he predicted, “people will want to go out and there’ll be a surge of people coming back to restaurants.” 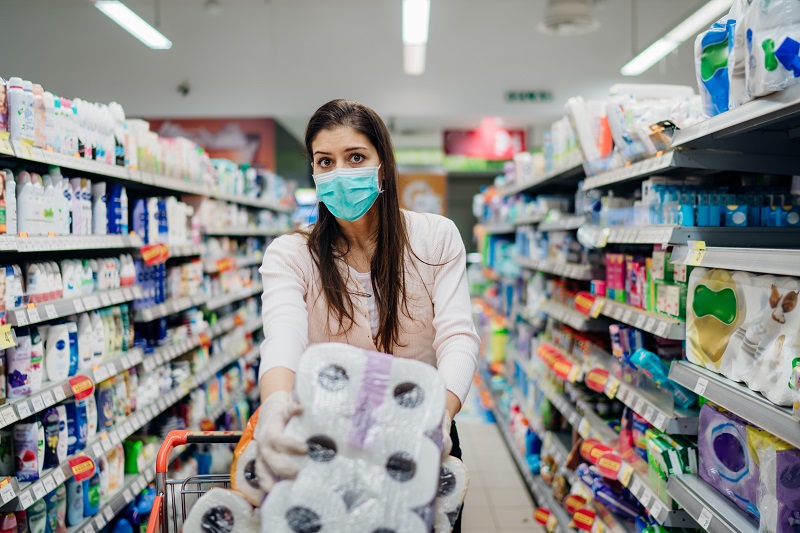 The launch of New Jersey’s social distancing guidelines in late March immediately took a toll on many retailers and landlords that have come to rely on so-called experiential operators.

The directives, issued under a series of executive orders by Gov. Phil Murphy, ordered the closure of all non-essential retail businesses in the state, including recreational, entertainment and personal care businesses. That includes gyms, movie theaters, hair and nail salons and other businesses that were seen as increasingly attractive to retail developments.

The fallout became clear in mid-April, when the Commerce Department reported that U.S. retail sales plunged a record 8.7 percent in March, as a result of the mandatory closures and declines in consumer spending. That trend was likely to continue for at least several more weeks as state-ordered shutdowns remained in effect.

Essential businesses that are allowed to be open include supermarkets, drugstores, restaurants (takeout only), liquor stores, hardware stores, gas stations, dry cleaners and laundromats and a handful of others. But Murphy on April 8 ordered additional safety measures for retailers that remained in operation, including limiting occupancy at 50 percent of the stated maximum store capacity and establishing hours of operation, wherever possible, that permit access solely to high-risk individuals. The governor also called for stores to install a physical barrier, such as a shield guard, between customers and cashiers and baggers wherever feasible and to demarcate six feet of spacing in check-out lines to demonstrate appropriate spacing for social distancing.