Executives with Landsea joined local officials and more than 150 tradespeople recently to mark a topping-out ceremony for Avora, a new condominium project in Weehawken. — Courtesy: Landsea

A new luxury condominium building on the Weehawken waterfront is on track to open by the first quarter of 2018, the project’s developer said recently.

Landsea, which is building the project known as Avora, updated the delivery schedule during a recent “topping-out” ceremony to mark the fact that the project had reached its planned 11-story height. Along with its 184 condos, the building is set to include 6,000 square feet of street-level retail space within the master-planned Port Imperial complex.

“Today we recognize the collective efforts of our construction and design teams and skilled tradespeople who are playing a critical role in delivering a new residential destination that will have a lasting footprint on the New Jersey Gold Coast,” said John Ho, CEO of Landsea Holdings Corp.  “Thanks to their determination and commitment to excellence, we’re now one step closer to realizing our vision for this iconic development that combines vanguard design, outstanding amenities, an incomparable waterfront setting and progressive sustainable building practices.” 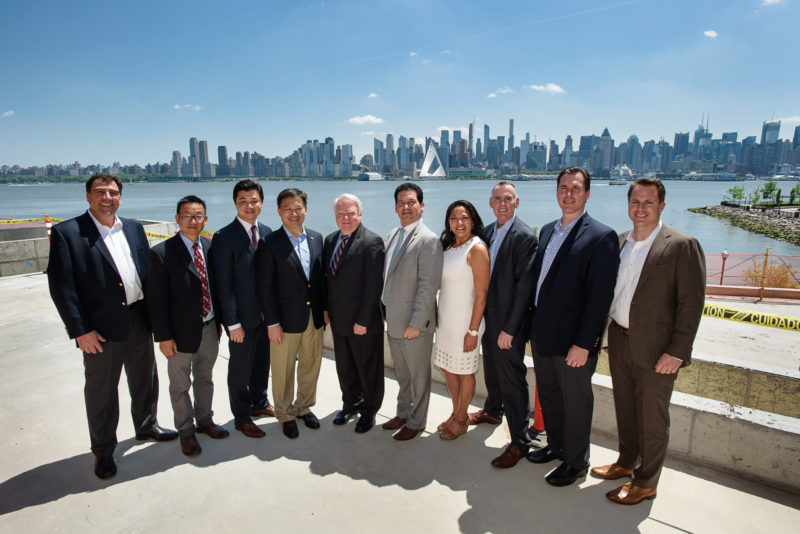 Strong preconstruction sales have led to the release of the building’s second phase of homes, Landsea said in a news release. The offering includes one-bedrooms starting in the $800,000 range and going up to more than $4 million for penthouses.

Buyers will have access to homes with nine-foot ceiling heights, high-end finishes and balconies and terraces with unimpeded New York City views, the news release said. Amenities include a concierge, private screening theater, business center and a grand salon lounge with a bar and catering kitchen, along with a lavish third-floor landscaped outdoor plaza.

The building is just steps from the Port Imperial ferry terminal, which anchors the $2 billion Port Imperial development that stretches through three municipalities.

“It’s been a 35-year process to get to this building,” Turner said.  “It’s hard to believe this waterfront was essentially vacant land, except for some industrial buildings. It has been a great partnership with developers to get to this point. Now we’ve had a ground breaking at Avora, a topping out, and we’ll all be back in 2018 for the grand opening.”

Avora, which was recently named “Community of the Year” by the New Jersey Builders Association, was designed by architects IBI Group.

“Avora has enjoyed widespread appeal since we launched pre-construction sales, drawing buyers from throughout the region who appreciate the property’s extraordinary waterfront setting, spectacular views, modern design, upscale finishes and appointments and resort-inspired amenities,” said Gabe Pasquale, senior vice president of sales and marketing for Landsea. “This extraordinary riverfront location has evolved into the destination of choice for those seeking luxury condominium living along the Gold Coast.”

Investors touts more than $800 million in CRE lending during Q1