The need for new office space had become clear by this time last year. But for the leaders of NAI James E. Hanson, the decision to move from their longtime headquarters in Hackensack not only fulfilled that need, but provided the chance to look back on decades of history.

After all, the firm had occupied the same building since 1972.

“I know my father was nostalgic about it,” said Bill Hanson, the president of NAI James E. Hanson and grandson of the company’s namesake. “But you get to revisit a lot of history that you probably wouldn’t think about if you didn’t get forced into thinking about it.

“As we’re cleaning out and going through things in the move, that’s kind of a rewarding thing to do, because it makes you realize what the family and what the company has accomplished over 65-plus years.”

NAI Hanson has long since completed its move — not that it went very far — and has managed to honor its past while creating a modern workplace for its brokers, property managers and other employees. Located about two miles away, at 195 North St. in Teterboro, the new 17,000-square-foot office lies within a 51,000-square-foot light industrial property built by company founder James E. Hanson, which the family has retrofitted and updated as part of the move. 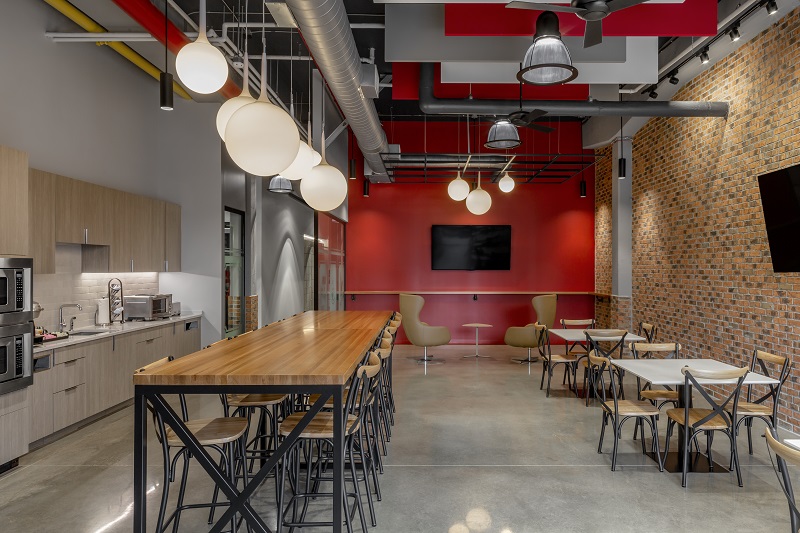 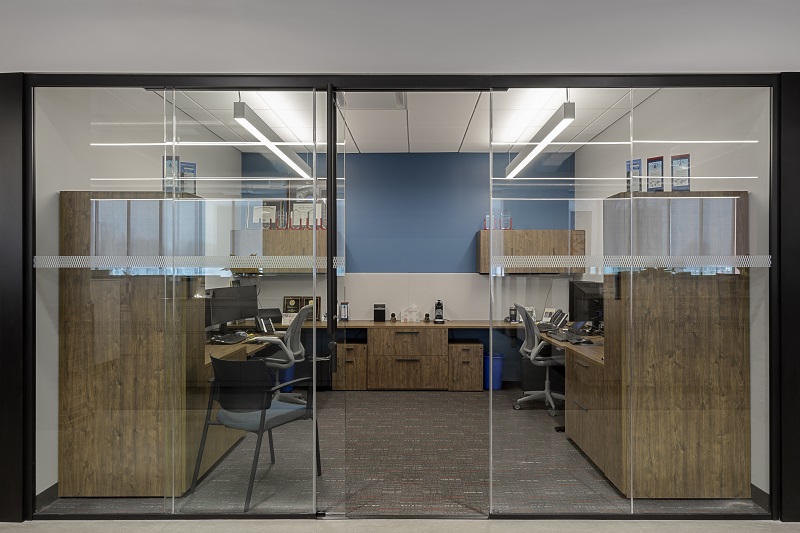 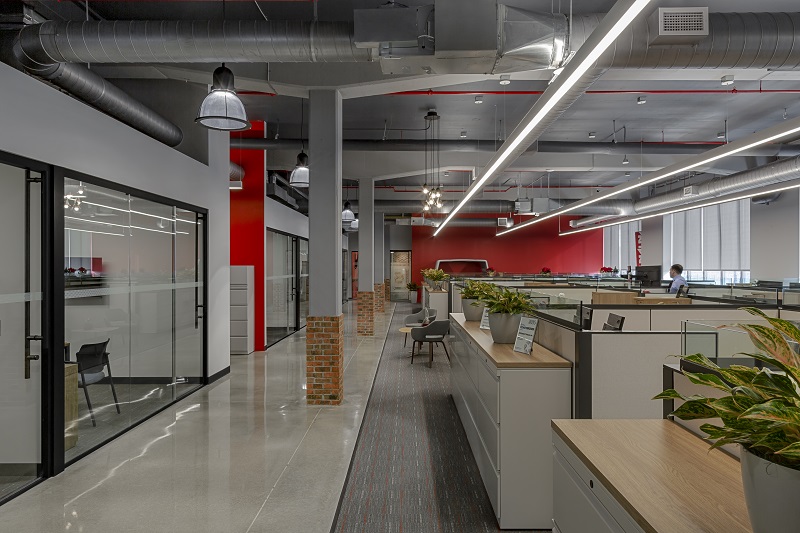 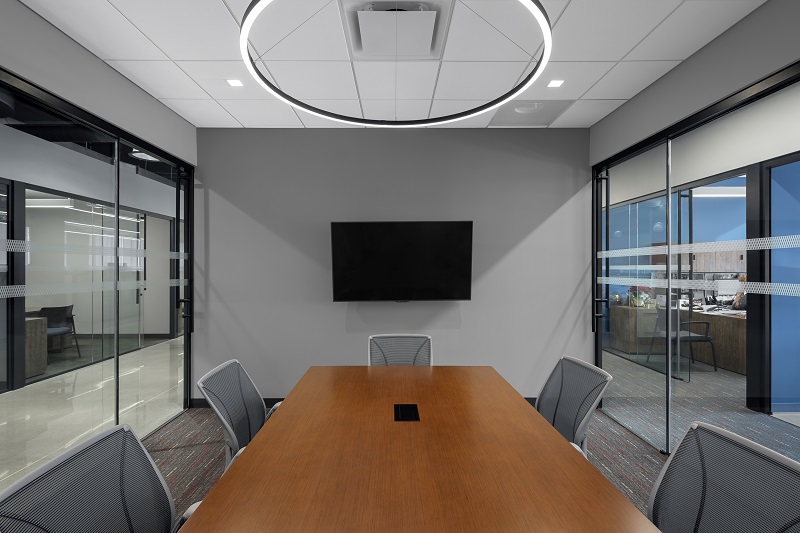 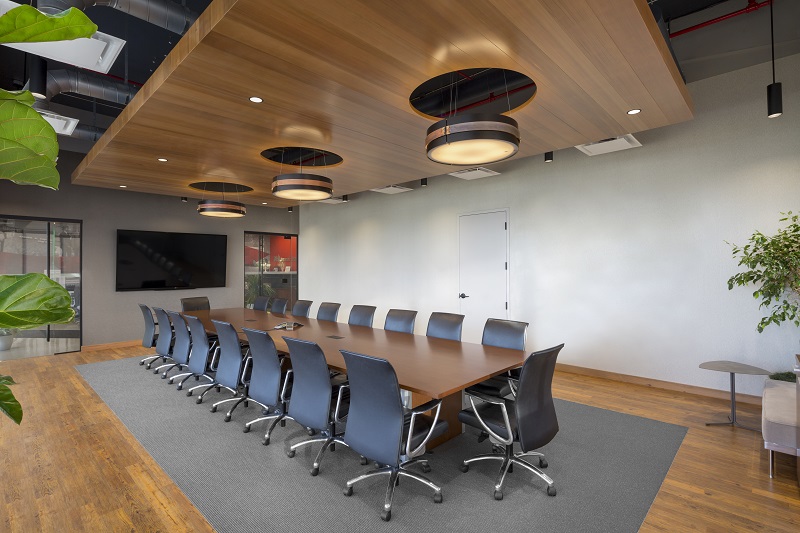 About 70 employees completed the move last fall, a group that includes an investment firm operated by the Hanson family. The new workplace, designed by Rotwein+Blake, features an open perimeter with sit-stand workstations, with floor-to-ceiling glass offices and conference spaces lining the interior.

The collaborative layout is a far cry from NAI Hanson’s former space in Hackensack, where the firm’s professionals were more isolated and split between the first and third floors.

“I think part of the strength of our company is the interaction between the different disciplines — that people know each other and they do business together every day,” Hanson said. “And putting it all on one floor enhances those relationships.”

The new office adopts many of the same principles that clients and other tenants have embraced in workplace design. For instance, the space seeks to promote a better work-life balance with a fitness center and a large, inviting break room and kitchen area with seating for about 24. 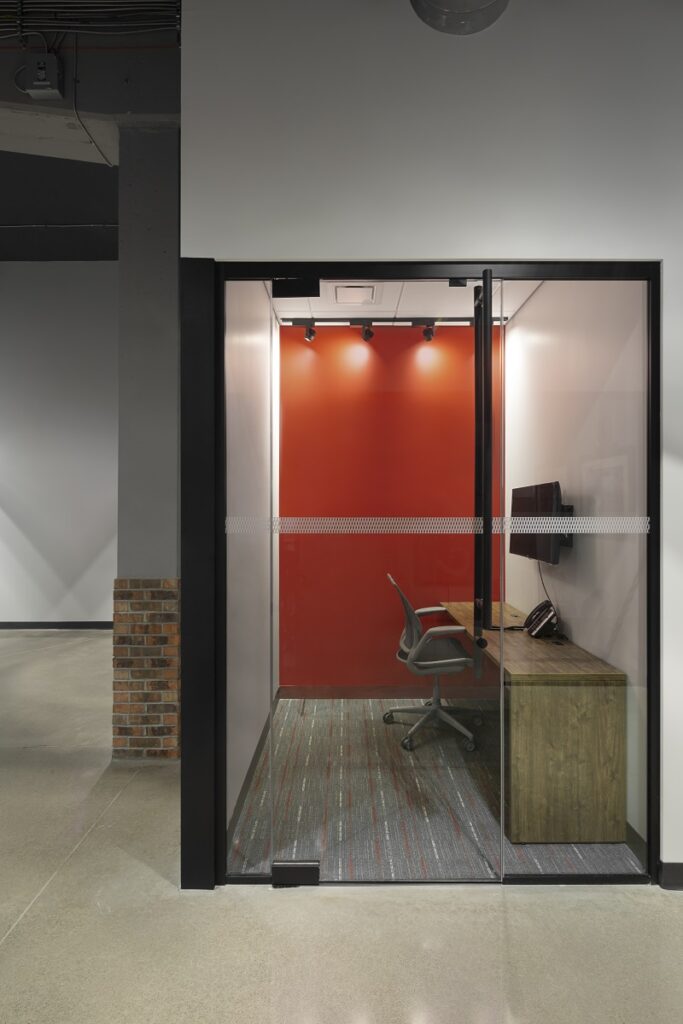 The space not only provides an escape from the office, but an additional space to entertain both clients and visitors to the new headquarters.

“This is another big deal for us: to have a place where people can interact comfortably,” Hanson said last summer during a tour of the property, noting that the firm is embracing the cultural shift that comes with open office concepts and a greater emphasis on communication.

“We did a lot of internal searching as to what our people really wanted out of the work environment,” he added. “This was a really big part of it.”

Executives at NAI Hanson had long discussed the prospect of relocating and modernizing their office space. Admittedly, the firm’s previous home at 235 Moore St. in Hackensack had become dated and poorly configured after the company had grown in place for more than 45 years.

But it wasn’t until around late 2016 that NAI Hanson opted to move ahead with finding a new space. That gave way to about 18 months of planning, which included the process of gathering input from executives and employees, and construction to update the building in Teterboro.

The space, which is about 50 percent larger than NAI Hanson’s footprint in Hackensack, still occupies only about a third of the building. The firm has attracted other tenants to the remaining space, most recently inking a 20,000-square-foot lease with a supply chain solutions firm.

Located just south of Interstate 80, the building provides the same type of convenience and access to highways such as the New Jersey Turnpike, the Garden State Parkway and routes 17 and 46 that the firm enjoyed in Hackensack. That access is critical to brokers in northern New Jersey, especially for a company that has historically focused on industrial space in and around Bergen County.

“This location, for our business, is ideal,” Hanson said. He noted that 195 North St. was originally built in 1960 by James E. Hanson, one of many industrial buildings that the late company founder developed in the company’s early years.

“That’s what his business was, so we’re coming home,” said Hanson, the son of NAI Hanson Chairman Peter O. Hanson and nephew of Jon F. Hanson, the chairman of The Hampshire Cos.

The new space is decidedly modern with a nod to the firm’s legacy in the industrial sector. Look no further than the decision to occupy a refurbished warehouse, which resulted in 14-foot ceiling heights, exposed beams and polished concrete floors.

“When you look at the height and the bones of the structure, you can envision what the potential is,” said Lance Blake, the president of Rotwein+Blake. “And what they wanted was a space that would change their culture and bring the office staff together.”

The project has also become a showpiece for the Livingston-based design firm, which sees additional opportunities in New Jersey, given the state’s abundance of older industrial buildings.

“We certainly have (shown the project to prospective clients),” said Cammy Bailey, Rotwein+Blake’s director of interiors. “And we’ve had people come to us and say, ‘We saw what you did at NAI. We’d like to take a look at our space.’ ”