Prologis Inc. has expanded its office in East Rutherford from 7,000 to 11,000 square feet, with a redesign meant to house its growing team in the region while complementing its company culture and promoting comfort, collaboration and productivity. — Courtesy: Prologis

The world’s largest industrial real estate owner is keen on expanding its already-vast footprint in and around New Jersey. That’s on full display, ironically, in the company’s recently redesigned office in East Rutherford, where Prologis Inc. has created a sleek, open workspace that aims to be both inviting and inspiring for the team that supports its portfolio in the region.

“If people are coming back to the office we want it to be comfortable,” said Jesse Harty, a senior vice president with Prologis and its market officer for New Jersey and New York. He added that, while it’s most important to be “out in the field with the customer … the office is a nice touchpoint where everyone can be collaborative and see each other.”

As the company’s portfolio in the market expands, so does its workforce. The San Francisco-based real estate investment trust has grown to about 65 employees in New Jersey and New York after the addition of 12 full-time employees and four interns earlier this year, all during a roughly three-month stretch. That’s nearly double its headcount from just three years ago, reflecting the growth of its footprint during that time from 37 million to 44 million square feet across 200 properties.

The new hires are also helping build what Prologis calls its Essentials platform, which provides additional services to tenants such as helping them source materials for their building fit-outs, in a bid to engage them beyond the lease signing and “beyond the four walls and the real estate.”

“It’s all about getting closer to the customer and being more customer-centric,” Harty said. 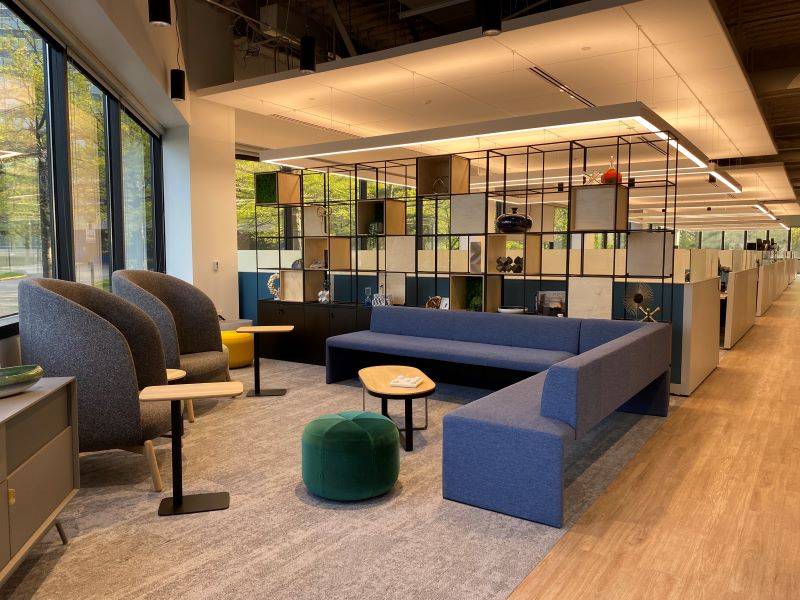 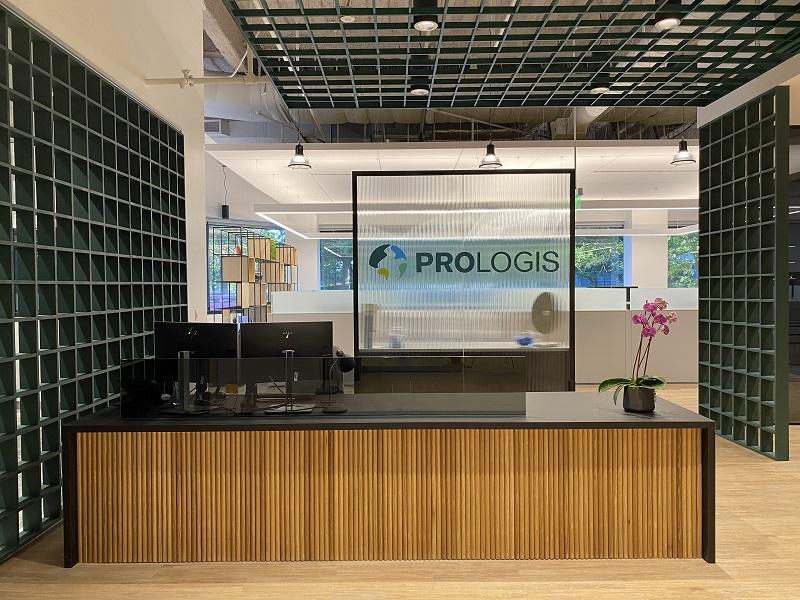 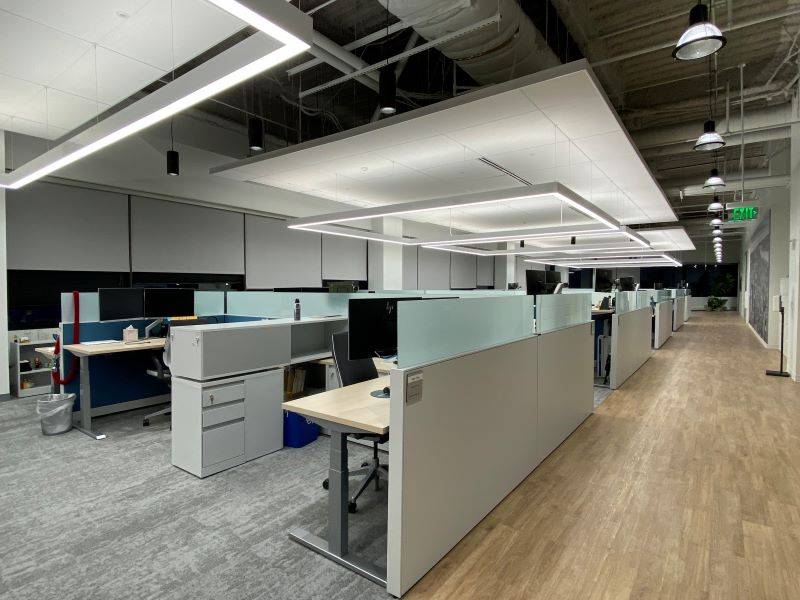 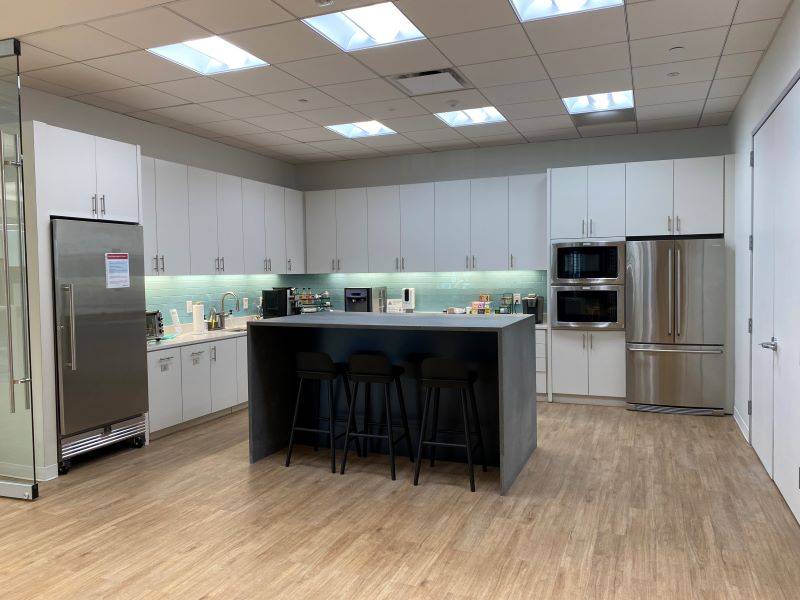 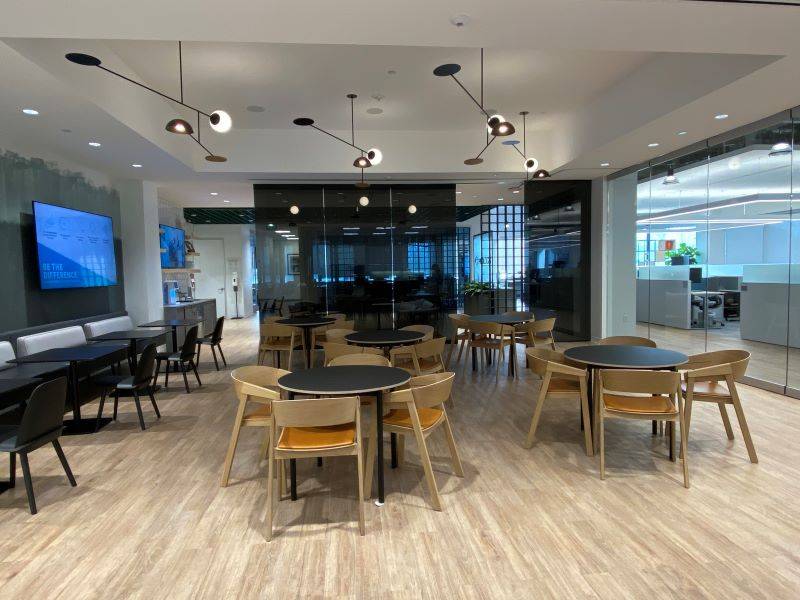 Located at One Meadowlands Plaza, the company’s 11,000-square-foot East Rutherford office is the nucleus of its operations in the region. The platform also includes offices in South Brunswick and Mount Laurel in New Jersey and in Manhattan and Queens, at John F. Kennedy International Airport, all of which are poised to expand as the REIT grows its reach in those areas.

It’s doing so in a number of ways, some of them requiring a more creative, entrepreneurial approach and additional personnel “to execute on the construction side.” Harty pointed to the growing importance of buying value-add sites that require repositioning, such as a 17-acre Northrop Grumman office campus on Long Island that it purchased this past spring and now plans to redevelop as 239,000 square feet of logistics space. In New Jersey, the REIT’s value-add projects include sites in Florence, Elmwood Park, Mount Laurel and Keasbey

“We’re not just buying the triple-net-leased or 10-year-leased buildings,” he said. “We’re focused on value-add and that does require more resources to execute on the value strategy.”

That’s not to mention Prologis’ recently announced pact to acquire Duke Realty Corp., which Harty could not discuss but will expand the company’s holdings in New Jersey by 21 percent. Prologis said in a presentation that it would “hire a number of Duke Realty personnel,” although specifics were not available at the time of the mid-June announcement.

The deal came as demand for industrial space in New Jersey remained strong through the second quarter, with rents continuing to rise, but amid growing economic unease and signs of a potential pullback by tenants. A report by CBRE found that northern and central New Jersey saw gains in overall occupancy for the 22nd straight quarter with 1.5 million square feet in so-called net absorption, yet the research described it as a modest bump and noted that leasing activity was slower than earlier periods.

“Looming economic uncertainty created some headwinds for New Jersey’s industrial market, albeit fundamentally sound, causing employment gains to slow as economic conditions have tempered from just a few months ago,” said Thomas Monahan, a vice chairman at CBRE. “The quarter’s leasing volume was softer compared to previous periods, reflecting both the lack of available product but also waning occupier demand.”

Even so, Harty said Prologis was bullish on the region, noting that “customers are still proactively leasing space because it is a tight market with less than 2 percent vacancy in New Jersey.”

“There are several key drivers for logistics real estate the past few years that include e-commerce, supply chain volatility and material and labor shortages,” he said. “We don’t see that going away in the near term, so we do see sustained demand to offset those issues.”

That points to continued hiring in the region for Prologis, which recently tapped construction industry veteran Erik Egger as a new vice president and development officer in New Jersey and New York. Finding additional staff is no easy task in a competitive labor market, but Harty’s team has found success with candidates that might not have direct experience with industrial space, but have proven themselves in other asset classes, such as office or retail.

That may not have been an option in prior cycles, when the warehouse and logistics sector was far less attractive than it is today.

“With industrial being a hot property type and in the news, people are more apt to want to come over to the industrial side,” Harty said, adding that most of the company’s recent additions in New Jersey have been focused on development and operations.

Its new hires in 2022 also include David Wilson as an Essentials solutions associate, who joins Essentials Solutions Manager Tyler Steinetz on a team that figures to grow in the years to come. Launched locally in 2020, the program helps tenants source products and services needed to run their warehouses and fulfillment centers, among other offerings.

Such services are all the more important as rental rates rise and tenants look to go vertical in their buildings, seeking to be more efficient with their space, Harty said. The REIT also provides resources related to move-outs, transportation, energy and digital infrastructure.

“It’s all about listening to the customer and understanding their pain points and how we can help them out,” he said. “They’re running into supply chain issues just like everyone else and we’re able to use our scale to help them get racking and forklifts in a timely manner, help them get a lot of the operational goods that they need to get their facilities up and running.” 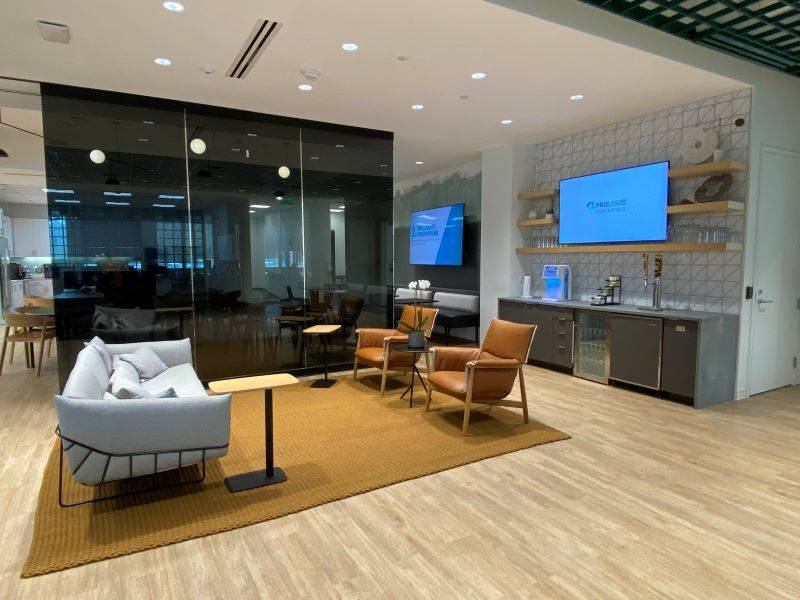 Prologis has expanded its office in East Rutherford from 7,000 to 11,000 square feet, with a redesign meant to house its growing team in the region while complementing its company culture.

It’s also meant to promote comfort, collaboration and productivity, with an abundance of glass and natural light, a host of meeting areas and technology to help its team connect with those in the office and in other locations. The industrial real estate giant says as much in a description of the new base of operations.

“It’s a multifunctional space, featuring a modern lounge complete with a coffee bar and beer tap to entertain customers and real estate brokers as well as provide employees a space to hang out and collaborate. Contemporary décor and details that reflect the region’s offerings can be seen throughout the space, with hardwood floors, hanging light fixtures, a mix of trendy artwork and more.

“Additionally, the primary conference room features a Liquid Galaxy screen, giving our team members the ability to ‘fly around’ Google Earth, view panoramic video and photos, develop interactive tours and graphically display GIS data. The office space also has a wellness room, a variety of plant life and work areas that can be configured in different ways.”

Prologis has also redesigned its other offices in the New Jersey and New York market.