Understandably so, the beachfront at Stockton University’s new campus in Atlantic City is all the rage, and it serves the important purpose of connecting the space to the outside world.

But as Chris Paladino notes, it’s also important for students to have a place to call their own.

“This is a building in a city and a university in a city,” said Paladino, president of the Atlantic City Development Corp., “but at some point, you want to come home.

“So we’ve created outdoor spaces that are open to the public and encourage the university to embrace the public along the Boardwalk,” he said, but students also have a private courtyard and other spaces inside the building, “so that it’s as homey as possible.”

Stockton and the developer, also known as AC Devco, have seemingly achieved both goals with the new campus, which includes a 533-bed residential complex and a 56,000-square-foot academic building across the street. Those spaces are now open at the intersection of Atlantic and Albany avenues, with students having moved into their apartments in late August and classes beginning less than a week later.

The milestones have brought the project to life after more than two years of anticipation. And stakeholders say it’s just the beginning of what they hope to be a larger transformation in Atlantic City.

“It’s been a dream for a long time,” said Michelle McDonald, Stockton’s associate vice president for academic affairs and its chief officer for academic programming in Atlantic City. “It’s been on paper for a couple of years now, but to actually see it become three dimensions is something really special.

“And it’s not often that you see something on paper and imagine what it’s going to look like, and then try to project into three dimensions and see it come out looking not just like it did on paper, but actually better.” 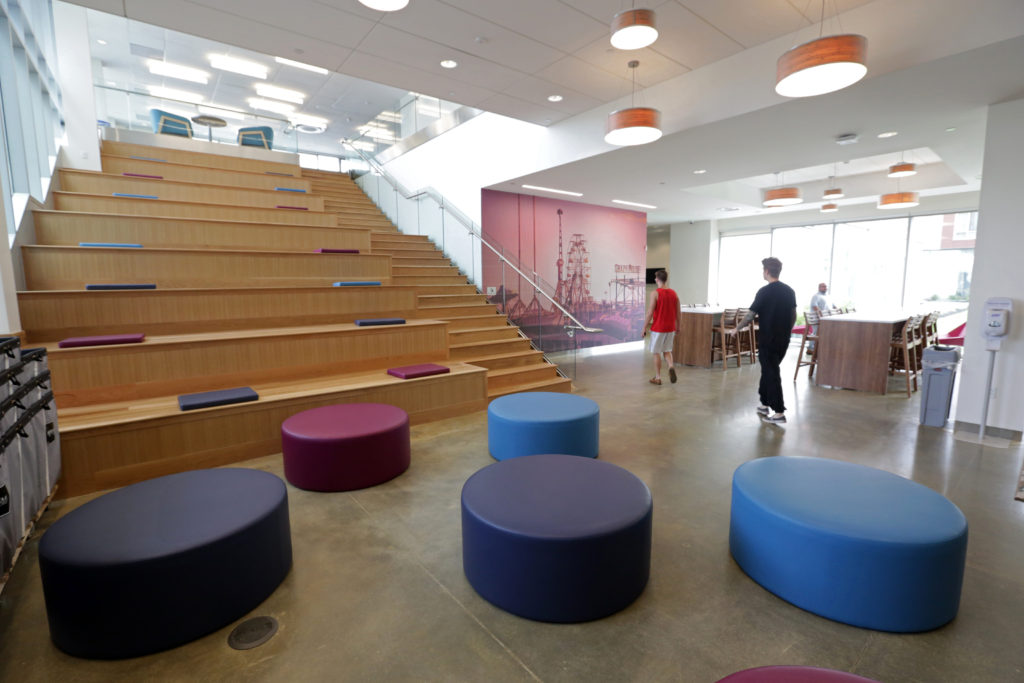 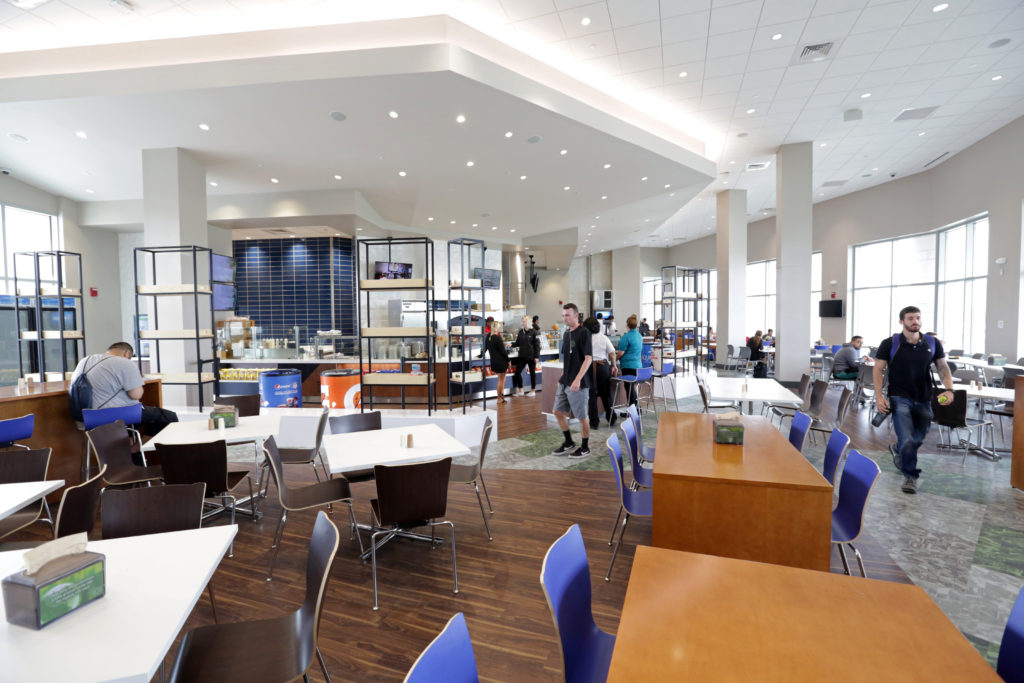 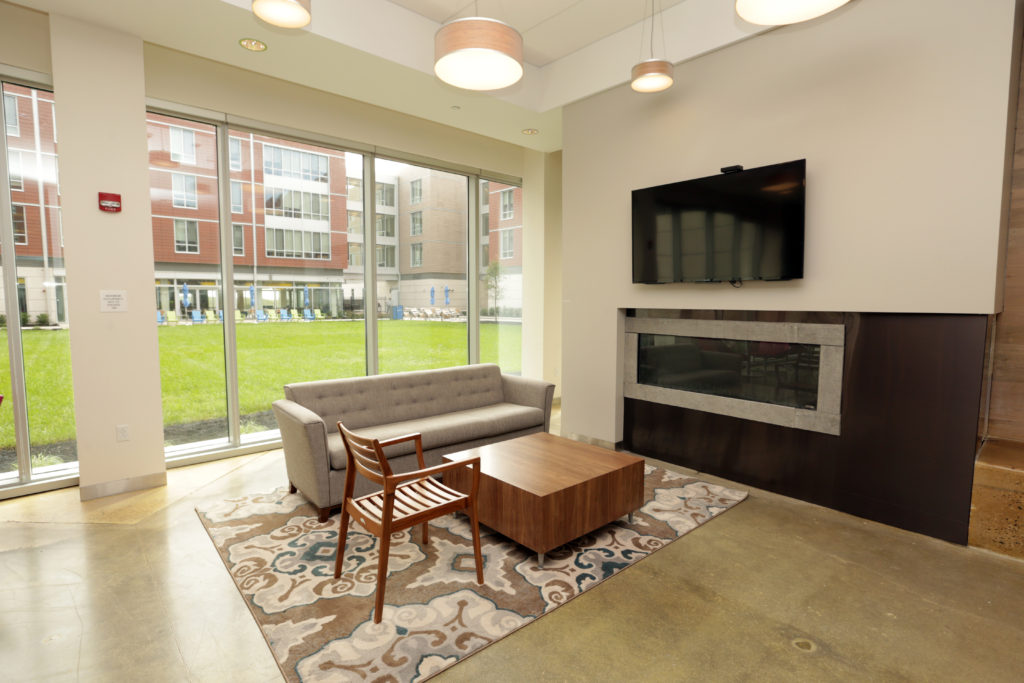 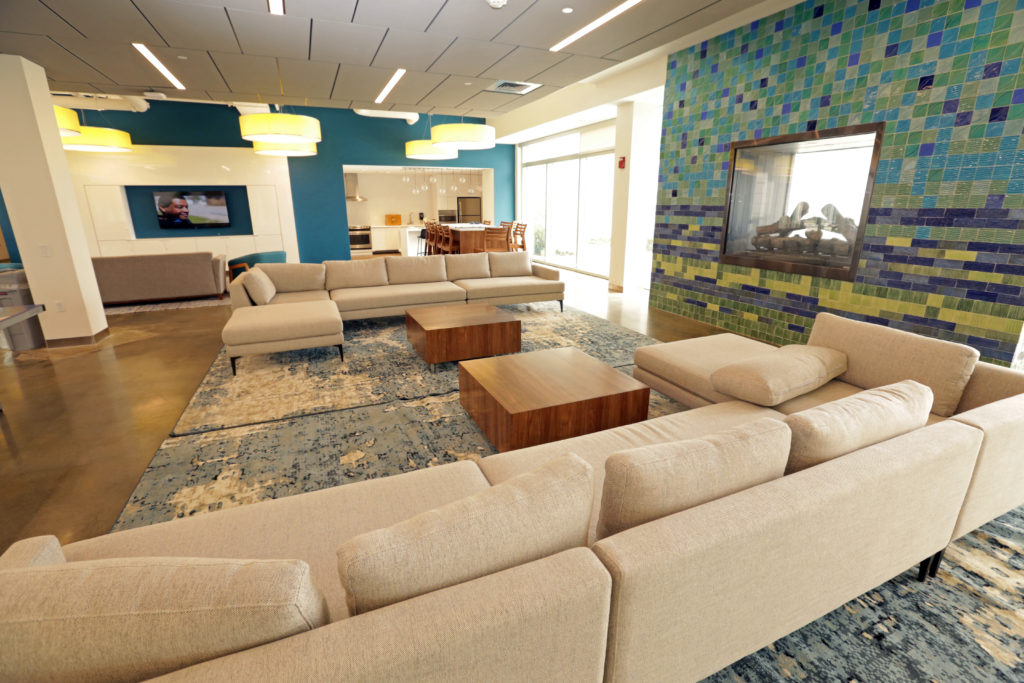 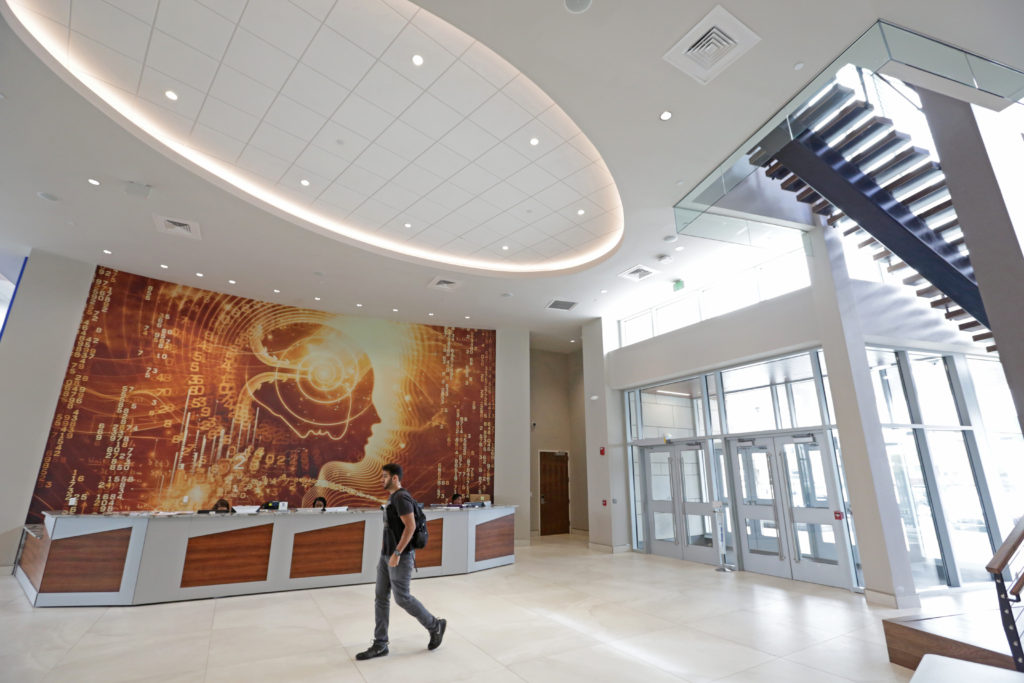 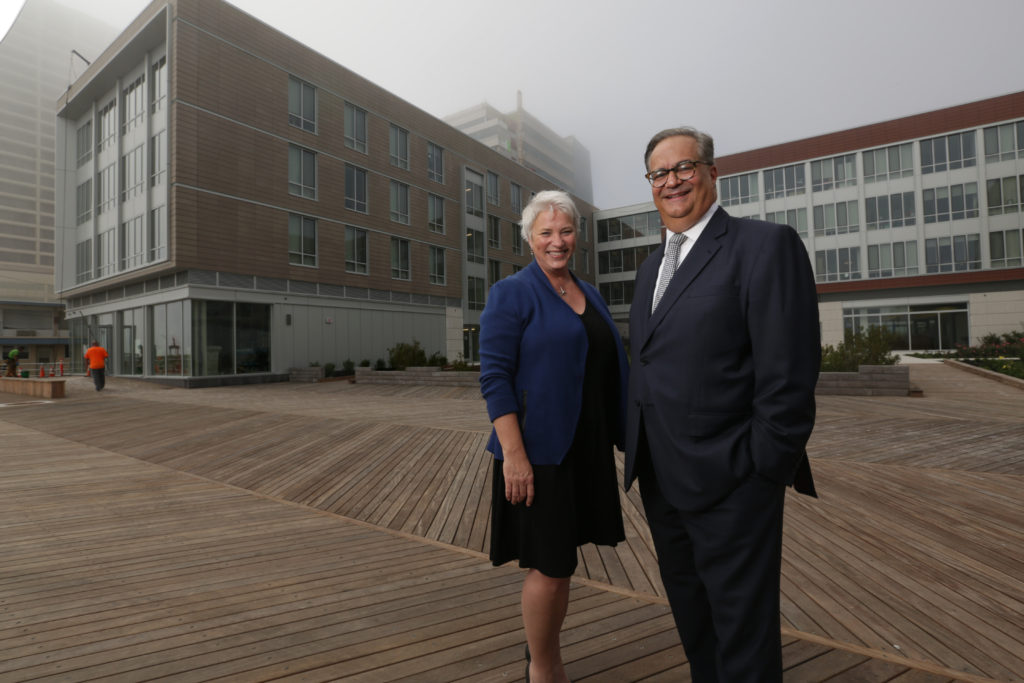 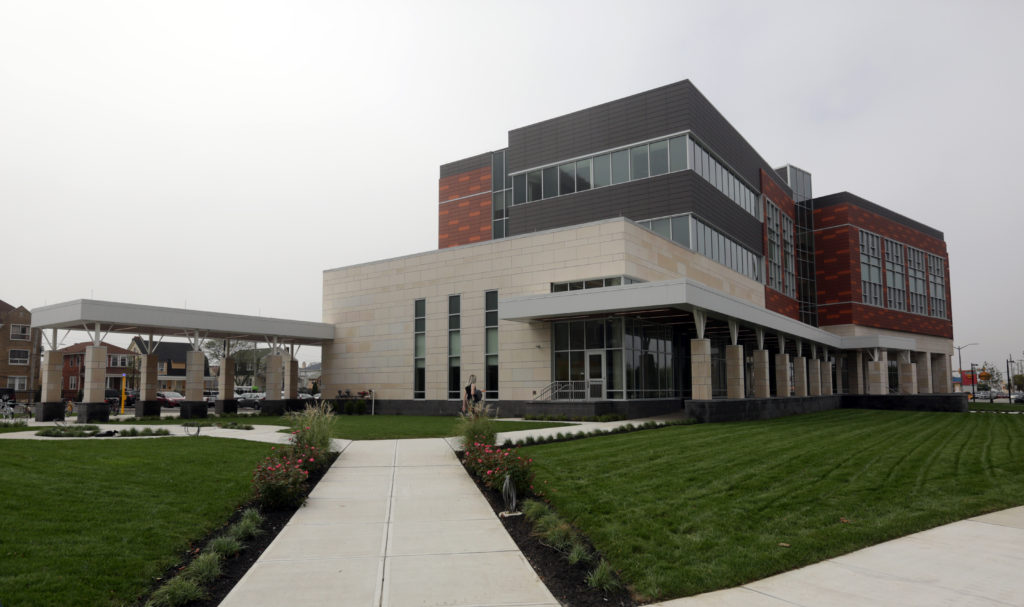 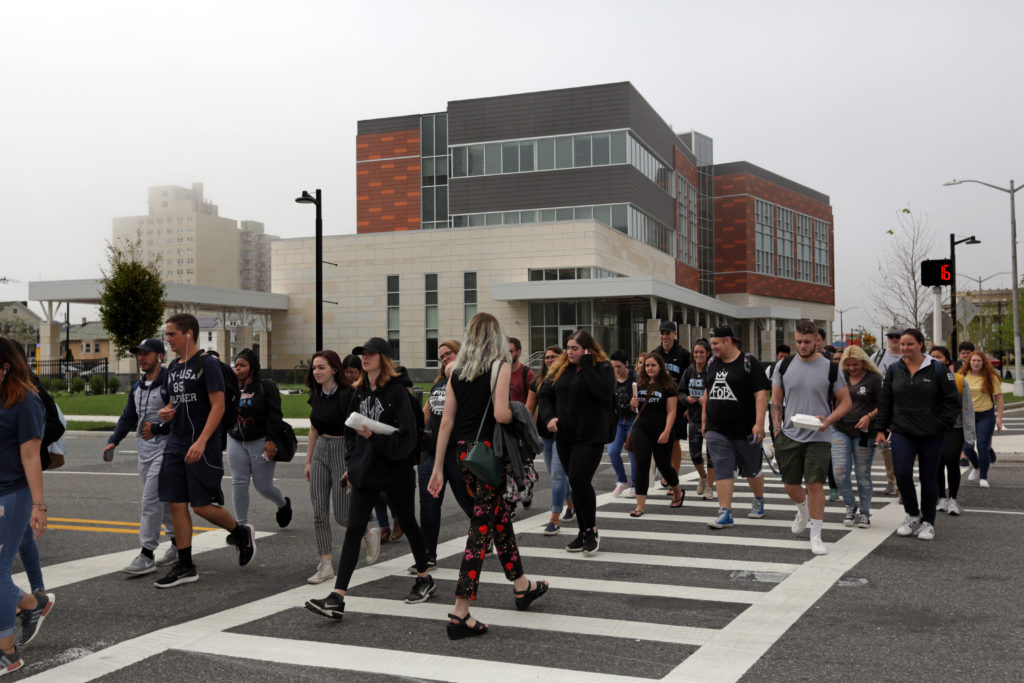 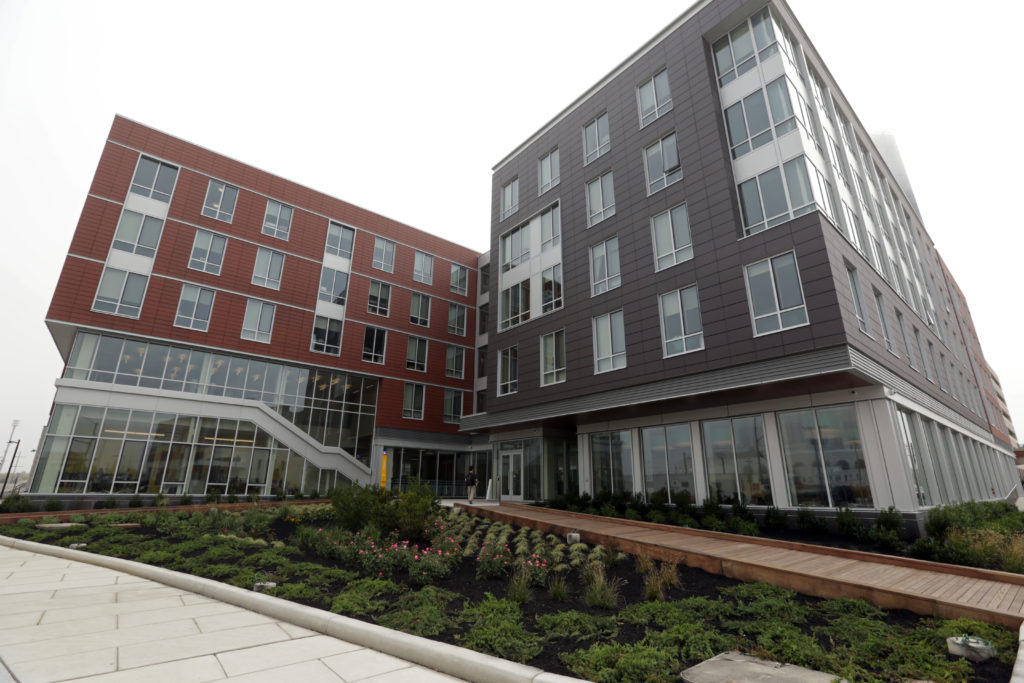 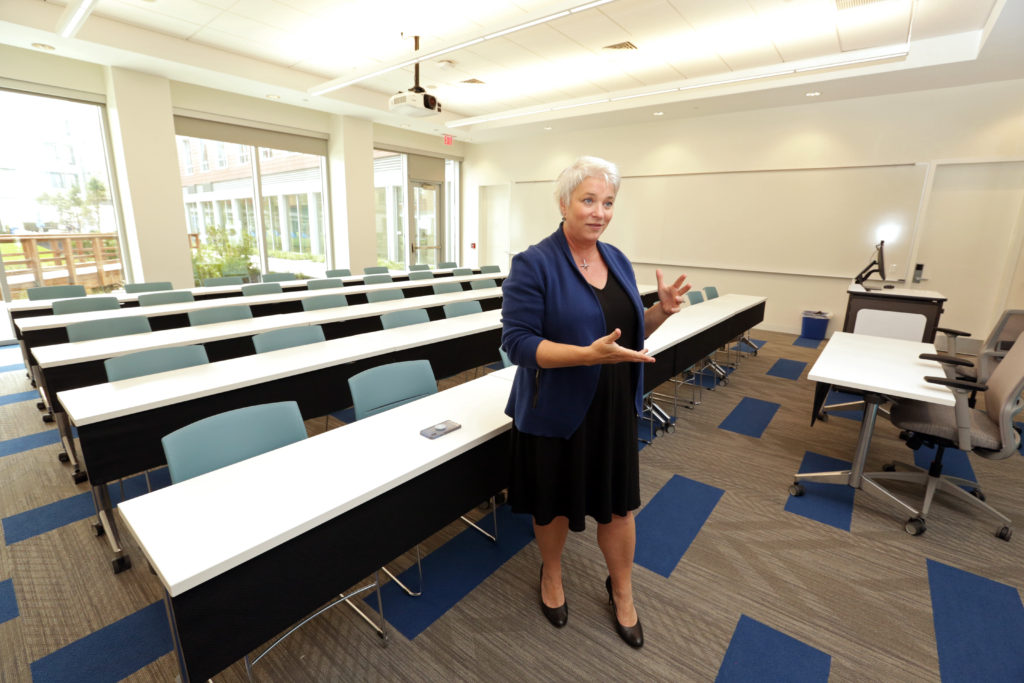 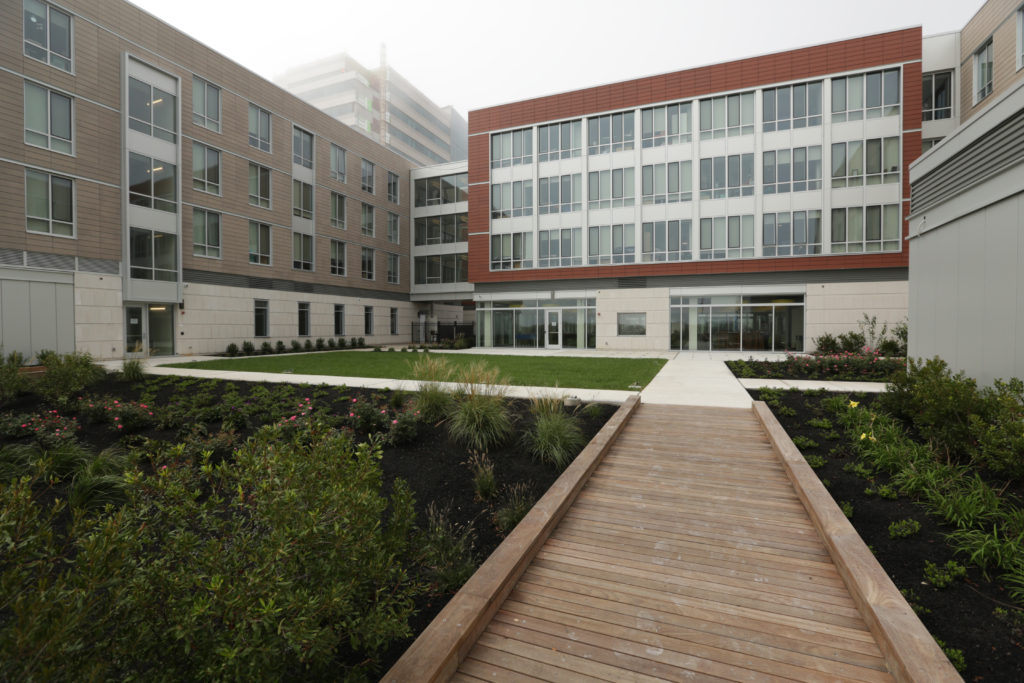 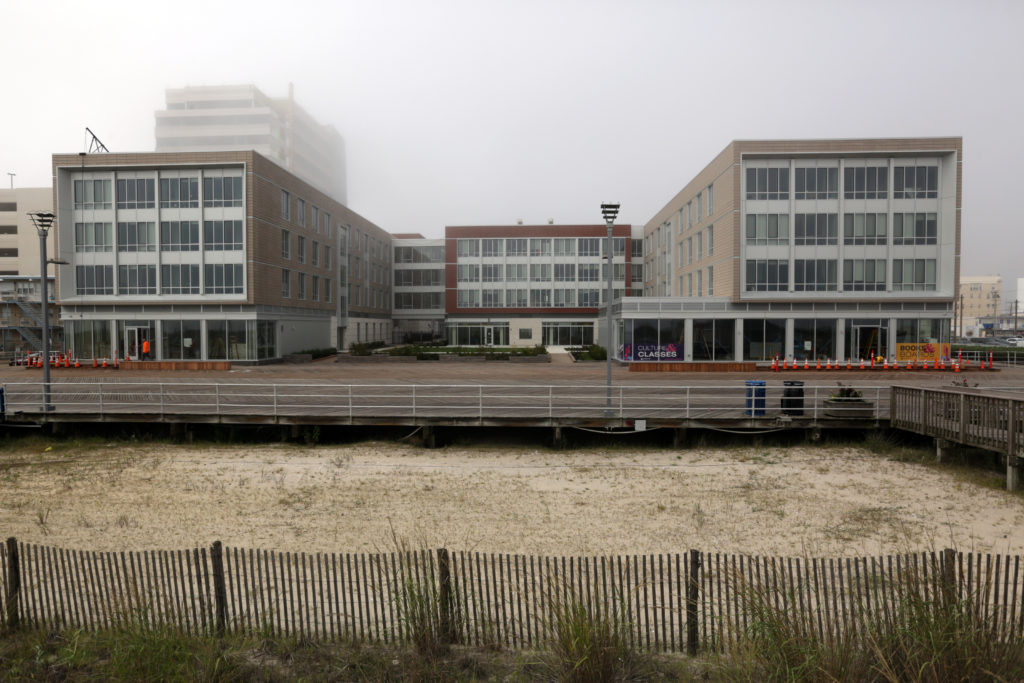 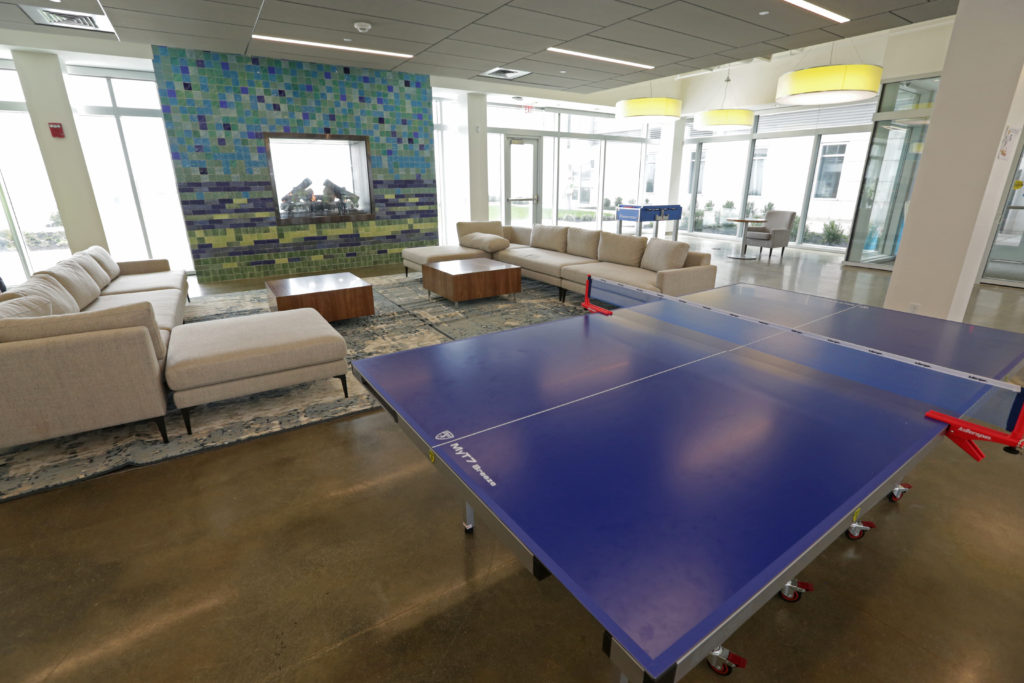 The buildings are part of the $220 million Atlantic City Gateway project, which also includes a new 72,000-square-foot office tower for South Jersey Industries that will be adjacent to the Stockton campus. The development represents the largest nongaming project in Atlantic City in decades — and one of the most significant public-private partnerships in state history — one that’s meant to spur economic development beyond the casino industry.

Elkus Manfredi Architects and SOSH Architects make up the design team for the Gateway project, while Joseph Jingoli & Son Inc. serves as the general contractor.

The project is off to a promising start and is indicative that the Atlantic City campus can have its own identity, but still feel connected to Stockton’s main campus in Galloway, McDonald said. She noted that more than 1,600 students took the shuttle between the two campuses on each of the first two days of classes, including many who weren’t actually enrolled at the Atlantic City campus but were curious to see the new facilities.

“We began to realize that in fact there was a connection, that they were moving back and forth and that we were still a part of one institution,” she said, later adding: “These are spaces that are conducive to meeting with each other, to setting up study groups, to spending an afternoon. Even if you don’t have a class here, it’s a great place to come and spend time.”

Paladino said the activity is in line with what AC Devco, an offshoot of the New Brunswick Development Corp., has seen in New Brunswick for many years and what it’s starting to see in Newark: “Students really change the tempo of a neighborhood” with their daily movement and presence, he said, providing a boost for local businesses and hope for local residents.

It may be too soon to gauge the ripple effect of the Gateway project, but there are already reasons to be encouraged. For example, McDonald pointed to real estate listings for properties in the neighborhood, which are increasingly touting “proximity to Stockton University” as a selling point.

Paladino, meantime, said the impact on the area will be clearer a year from now, as students who are unable to live in the new residential building look for other housing options around the campus. He added that new businesses have opened on Atlantic Avenue and that he expected more to follow now that the project is up and running.

“This is Atlantic City — there’s been a lot of false hope, a lot of disappointment over the years and I think in many ways everybody took a real wait-and-see (attitude),” he said. “It’s kind of the land of broken dreams, in some ways, and I think now that this is a reality, like other places where we’ve worked, you’ll see it to be a kind of block-by-block, organic redevelopment.”

That impact will only grow when South Jersey Industries, a utility that was founded in Atlantic City, relocates from its current headquarters in Folsom. The company is expected to move into its new six-story office tower in mid-November, bringing with it hundreds of employees.

Other plans for the site could include additional expansion by Stockton if the university deems it necessary, Paladino said. AC Devco still controls a 2.25-acre oceanfront parcel to the east of the student housing building and another nearby property, which could accommodate additional housing, while there is enough surface parking at the academic building to potentially double the size of that facility.

Discussions between the developer and the university are ongoing, but there is clearly demand, McDonald said. With 1,300 students taking courses in Atlantic City this semester, Stockton has already exceeded its projections for the new campus. That’s not to mention that the residential building is already 98 percent leased.

“There is no question that we can do more,” McDonald said, noting that about a third of Stockton students live on campus. What’s more, the university’s main campus in Galloway is built out, given that is a protected section of the Pinelands.

“We definitely have room to expand and we have the demand to expand,” she said. “And our freshman class has been growing every year, so there’s definitely the interest in developing more in Atlantic City.”

Paladino says the project has had one other major impact in the short term — that it “changed the way things were done” in Atlantic City when it came to major development. He said the cooperation between the private sector and public officials was unprecedented for the resort town, adding that skeptics “said you couldn’t get all of these people to row in the same direction and that it really hadn’t happened in Atlantic City.”

“Cooperation isn’t the first thing that comes to mind when they talk about development in Atlantic City,” Paladino said. “So much of it has been done by major corporations that have landed here to build big hotels, but this, probably at least for its time, was the largest, the most profound public-private partnership in the history of New Jersey.”

He offered high praise for everyone from Stockton and South Jersey Industries to the city of Atlantic City, the Atlantic County Executive’s office and state entities like the Economic Development Authority and Casino Reinvestment Development Authority. And he hopes that such a “profound change” is an enduring one.

“I really hope that it basically sets a new template for how things can get done, because Atlantic City needs a lot of help and it needs projects like this at intersections all throughout the city,” Paladino said. “And people walked away feeling, I think, pretty good about themselves and their effort.”

GH&C adds to real estate group with another hire