The market for warehouse and logistics space, with its unprecedented success in recent years, faces new pressure from rising interest rates, inflation and a changing scope of demand from the e-commerce sector. Yet developers and investors remain bullish on the sector’s fundamentals and a tenant pool that has grown more diverse.

It was a key message in late April from five industry leaders, including executives from four of the country’s most prolific builders and buyers of distribution space, who spoke during a program hosted by Real Estate NJ. Demand is still well ahead of supply in New Jersey and other top-tier markets, they said, even with signs of economic uncertainty at home and abroad.

“You’ve got all kinds of new demand, and that diversity of demand is what’s driving the market,” said Rob Kossar, a vice chairman with JLL and its Northeast industrial market director. “So it’s not all about e-commerce anymore.

“On the flip side … the capital markets are a little choppy right now,” he said, pointing to rising interest rates, inflation, the war in Ukraine and lenders “that have gotten a little skittish and rates that have moved.” He continued: “(That) has affected the underwriting on deals, particularly stabilized long-term deals, but also potentially in value-added development.”

The panelists — which included Bridge Industrial’s Jeff Milanaik, Prologis’ Fritz Wyler, CenterPoint Properties’ PJ Charlton and Link Logistics’ Britt Winterer — said the economic unease has cast a cloud over the industrial market that they haven’t seen in several years. Developers are not only grappling with supply chain issues and rising constructions costs, as they have through most of the pandemic, but a tighter lending environment.

That has raised at least some questions about the buyer pool for industrial — now the most coveted asset class by investors — and the returns that sellers can achieve.

“It makes it a much more difficult investment environment today, with that uncertainty,” said Winterer, an executive vice president and head of development for Link Logistics, Blackstone’s industrial real estate arm, speaking during the April 26 program at The Highlawn in West Orange. 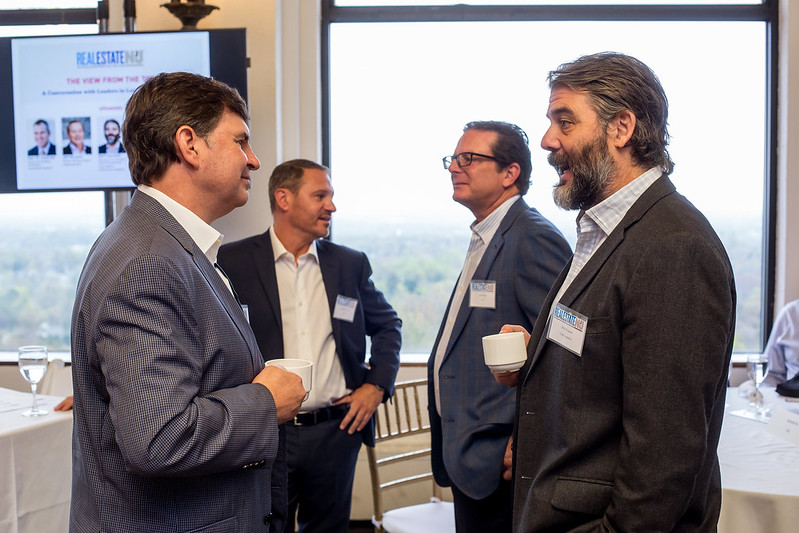 Even so, owners are likely to withstand the headwinds thanks to the market’s ongoing lack of supply, which has fueled record rent growth in recent years. Those fundamentals have allowed developers to command annual increases in their leases, the panelists said, helping to offset cost increases and the surging price of development sites.

“There’s been such great capital demand in those markets that it’s driven the pricing up significantly,” said Winterer, whose team focuses largely on coastal, supply-constrained regions. He later added: “In order to pay the high prices for this infill, gateway market real estate, you’ve got to be able to push rents and you’ve got to be able to push bumps, especially now in an inflationary environment.”

The pace of rent growth has also allowed landlords to rethink their approach to longer-term leases.

“We’re not shying away from 10-year leases,” said Charlton, a senior vice president for investments with CenterPoint, “but it is a strategy of ours to do a five-year lease instead of a 10-year lease or look for investment opportunities that have two or three years of term.”

Panelists also pointed to the growth of rates in older, less functional buildings that have more than doubled from four or five years ago, reaching the mid- to high teens per square foot with multiple offers for each space. Wyler, a Prologis’ managing director and east region head of capital deployment, said it’s a reason to think twice about razing Class B warehouses to redevelop sites as new buildings.

Also looming is a pullback by Amazon, which in recent years has been the most expansive and aggressive user of industrial space. But the e-commerce giant is now poised to slow its pace in a major way after recently conceding that it has overbuilt its network of fulfillment hubs, while reporting its first quarterly loss since 2015.

The panelists, who avoided mentioning Amazon by name, were confident that other users would pick up the slack.

“There’s all that other pent-up demand that never is able to find a home,” said Milanaik, Bridge Industrial’s Northeast region partner. “I think there’s going to be an opportunity that’s still pretty viable.”

Additionally, according to JLL data, the logistics and food and beverage industries now account for about 33 percent and 12 percent of leasing activity in the firm’s Northeast region, respectively, as of 2021 and 2022 year to date. Both sectors have grown their share since 2020.

According to Winterer, tenants are increasingly focused on better utilizing buildings that have ceilings as high as 36 and 40 feet, a standard for modern, high-end industrial projects. Those spaces often go unused, he said, but that figures to change with the growth of automation in logistics facilities.

“The utilization rate is a super important thing for our business these days,” he said. “For our tenants now, it’s all about throughput, it’s all about how much they can get in and get out as fast as possible.”

Any newfound availabilities will provide a chance for users, including those that are lesser-known and less prolific, to improve that efficiency.

“I think what we’re starting to see are smaller tenants using clear height and actually using that cube space,” Winterer said. “That’s really significant, I think, and it’s also a good thing for all of us because, as you increase throughput, the tenants are able to make more money. Then we’re able to increase rents as well.”

The view from the top: A conversation with leaders in logistics real estate (SLIDESHOW)