Lincoln Equities Group has completed its demolition of two historic, bomb-proof buildings in Bayonne, paving the way for the construction of a massive new distribution center for UPS.

The firm said the pair of six-story, 1.5 million-square-foot structures, which date back to the 1940s, were the last remaining buildings at its 153-acre waterfront development site in the city. That’s no longer the case, following an implosion on Sunday that marked the culmination of three years of site preparation.

LEG will now turn its focus to building the facility for UPS, which agreed earlier this year to lease 886,256 square at what’s known as Lincoln Logistics Bayonne.

“Since purchasing the massive site in 2018, our crews have worked steadily to ready it for construction, which involved importing over one million tons of clean fill to raise the site out of the flood plain and demolishing multiple former U.S. military buildings,” LEG President Joel Bergstein said. “Now, construction can begin on the 1.4-million-square-foot logistics complex that will create thousands of jobs and play a vital role in expanding the local overall economy.”

UPS will anchor the complex, which is part of the Military Ocean Terminal at Bayonne property. According to LEG, the regional hub and package distribution center is slated to be complete by 2023, creating more than 1,000 jobs.

“We’re excited for the opportunity and growth that this project will bring to the people of Bayonne and the state of New Jersey,” Bayonne Mayor Jimmy Davis said. “Lincoln Logistics Bayonne will enable our city to serve as a major focal point for shipping, logistics, supply chain and innovation, and this implosion is the final step before construction begins.” 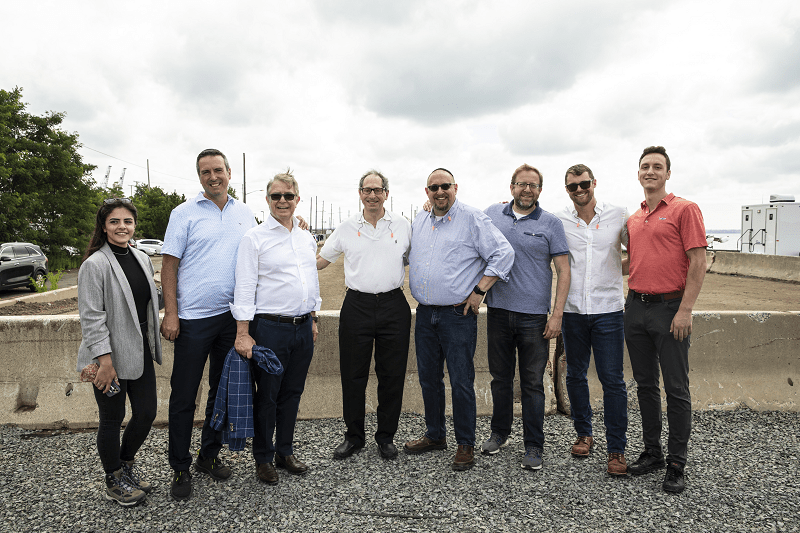 Because the imploded buildings were constructed to withstand a bomb blast, crews had to remove panels that made them bomb-proof, LEG said. Workers then cut inside columns to place the explosives for the buildings’ implosion.

It was the second of two implosions at the site. LEG noted that, in 2018, a demolition crew imploded a 175-foot smokestack and a 150-foot steel water tower.

When complete, Lincoln Logistics Bayonne will bring much-needed industrial space to New Jersey, boasting a location seven miles from Newark and eight miles from the Holland Tunnel. It’s among several projects that have helped repurpose the man-made peninsula extending into the New York Harbor, having served as a supply depot during World War II.