The highlights of a multimillion-dollar upgrade at Apogee include a redesigned three-story main lobby with a new entryway, along with a dramatic, four-sided living green wall and a two-sided fireplace. — Courtesy: Apogee

The ownership of a 30-story residential tower in Cliffside Park has completed a sweeping overhaul, with top-to-bottom upgrades and new amenities aimed at putting the building on par with the newest properties along New Jersey’s Gold Coast.

The board of directors at Apogee, a cooperative building at 250 Gorge Road, recently unveiled the multimillion-dollar modernization and rebranding campaign at the 312-unit high-rise. The effort includes everything from a redesigned façade and three-story lobby to expanded common spaces and upgraded building systems, capitalizing on the demand for luxury living near the Hudson River.

Steve Kratchman Architect P.C. oversaw the design and construction, which has already led to higher sale prices without any assessments to existing owners.

“We’ve all watched as the New Jersey Gold Coast has developed around us with a wave of new, high-end residential properties and lifestyle offerings,” said Hatice Dalton, board president at Apogee. “Recognizing that we share many of the same advantages as these buildings, including location and views, we decided to take a proactive approach and reposition Apogee through meaningful upgrades to leverage the region’s growing appeal and buyer craving for highly amenitized, trophy buildings.” 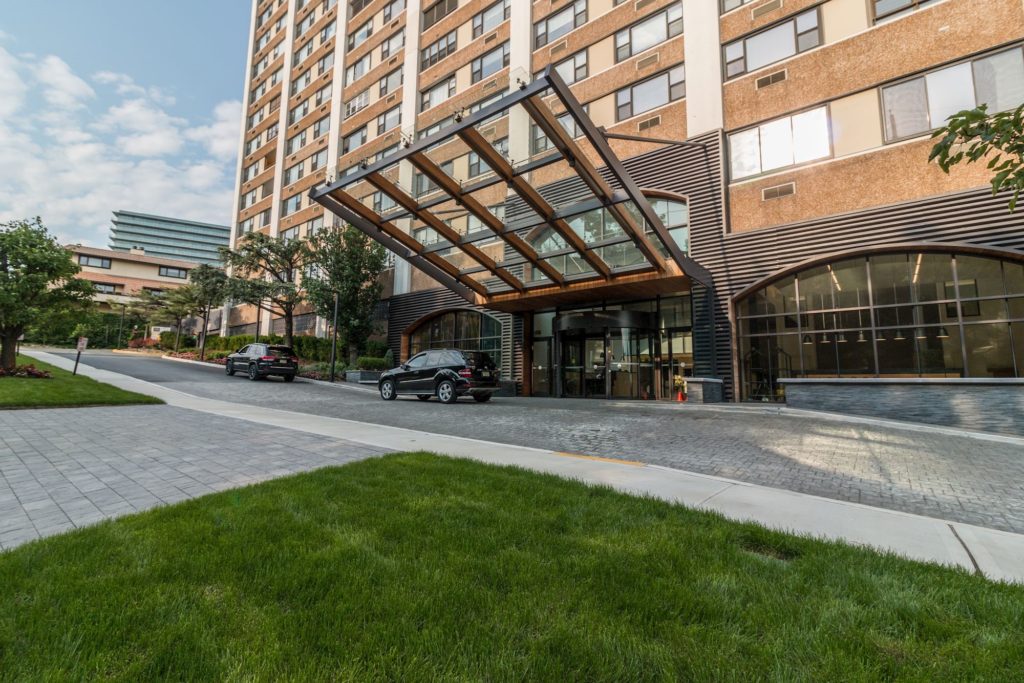 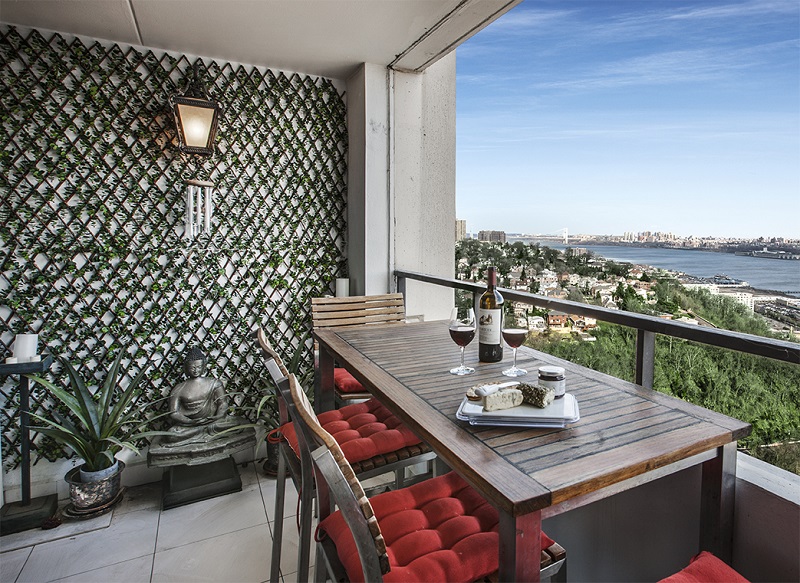 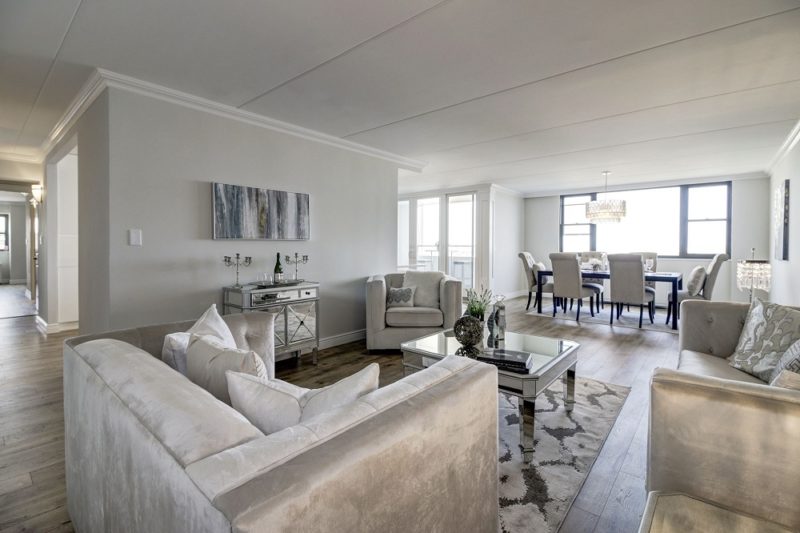 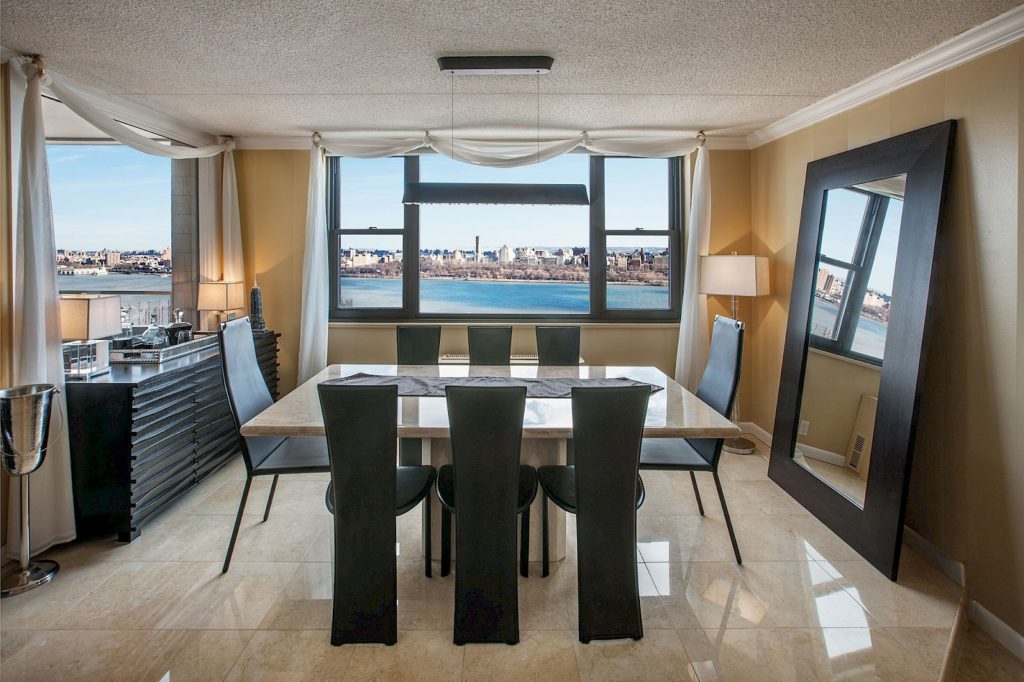 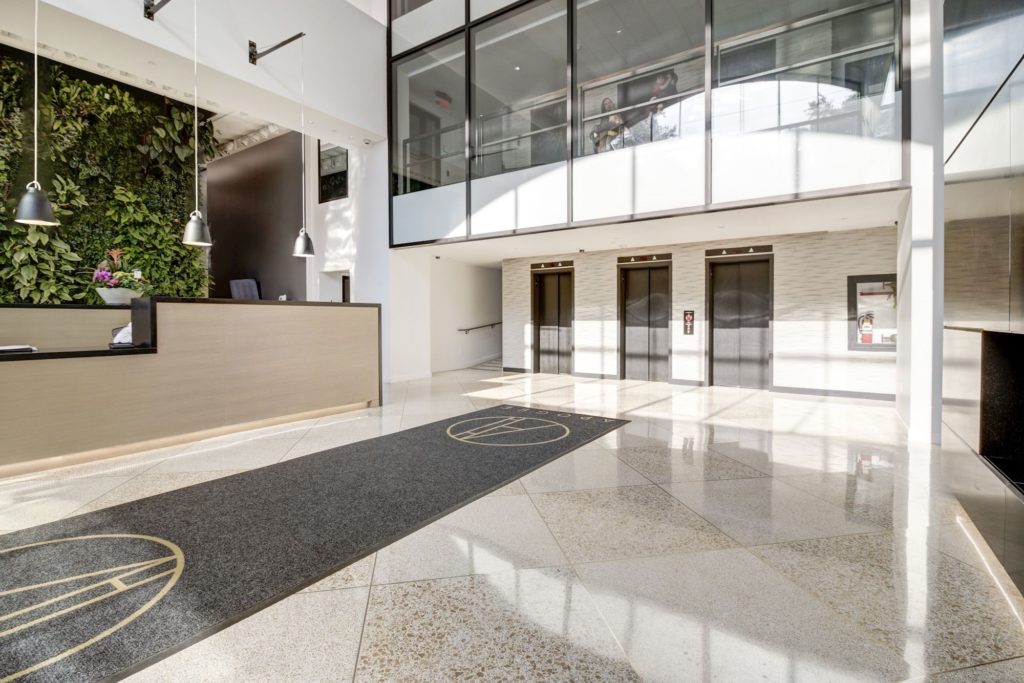 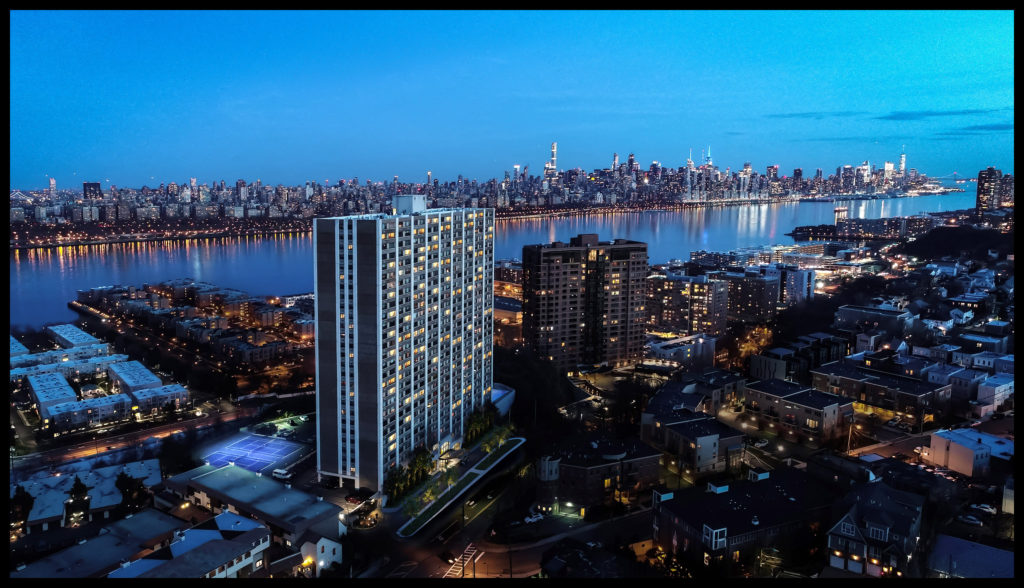 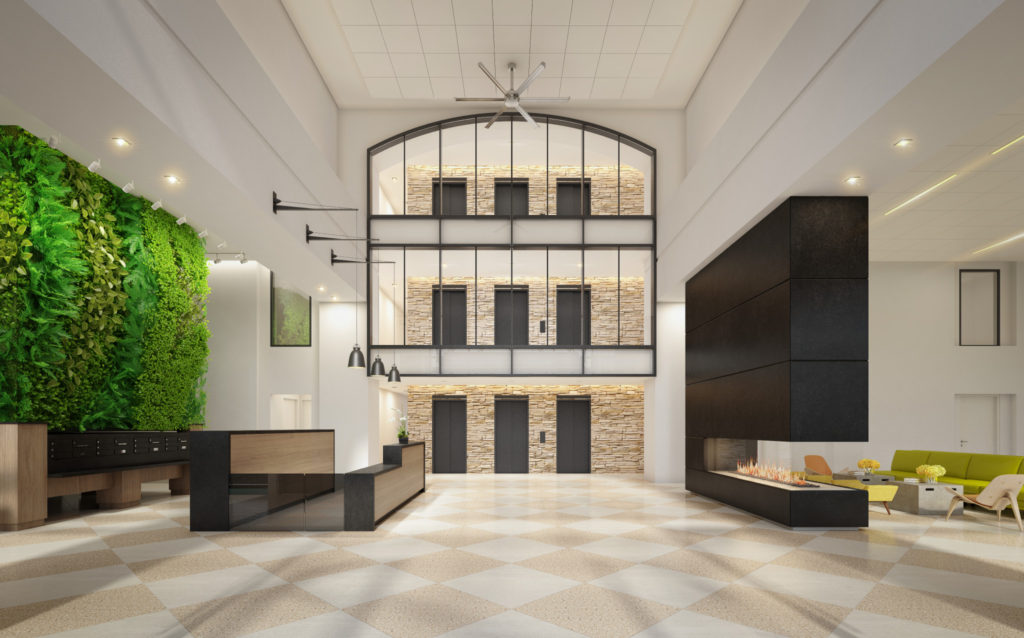 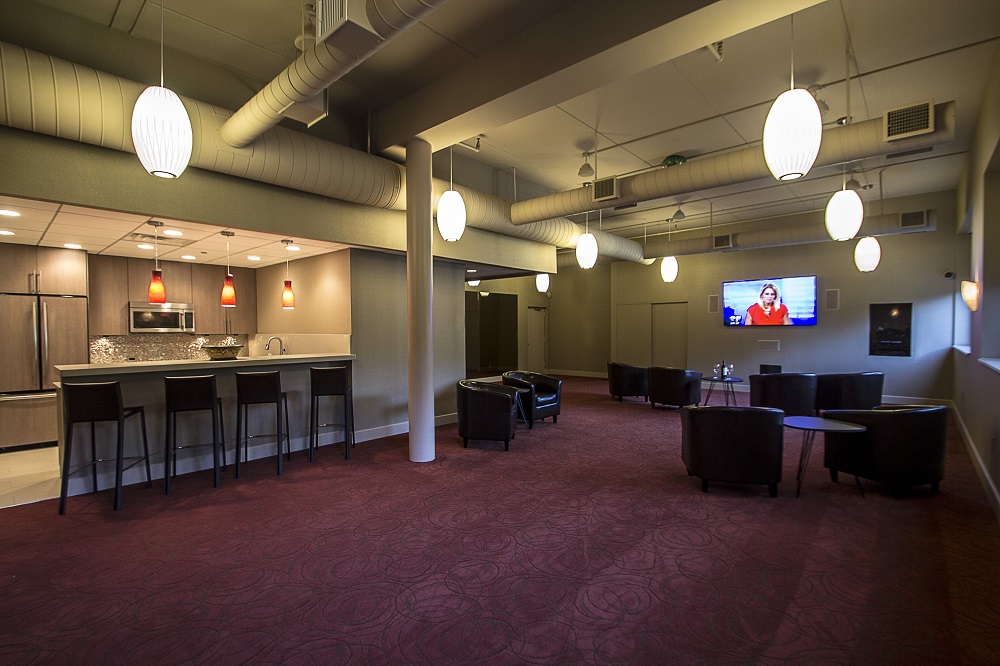 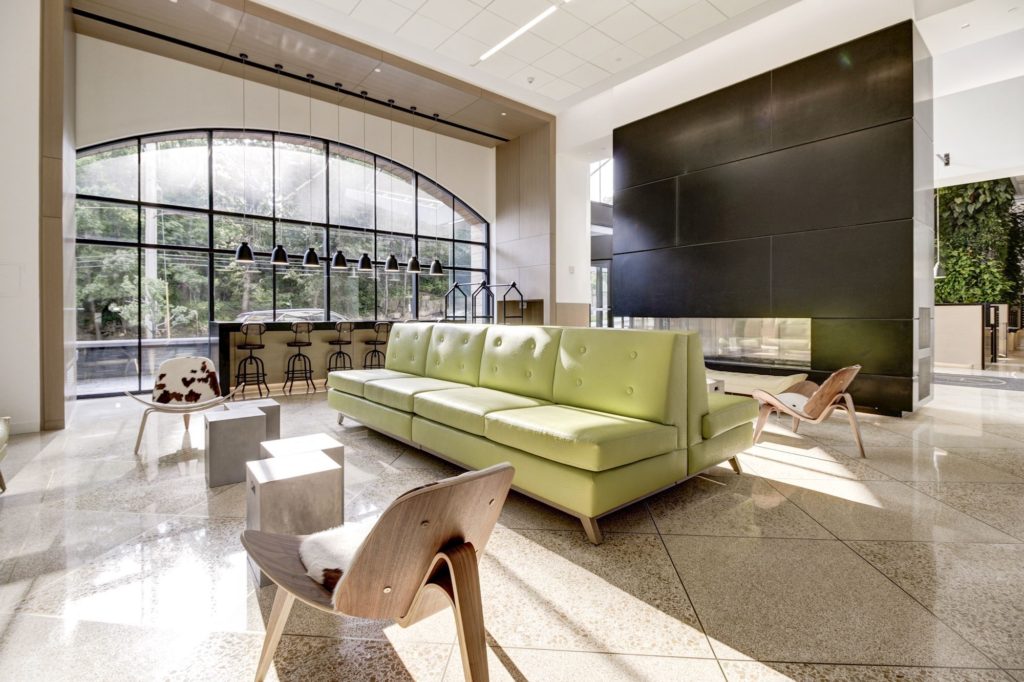 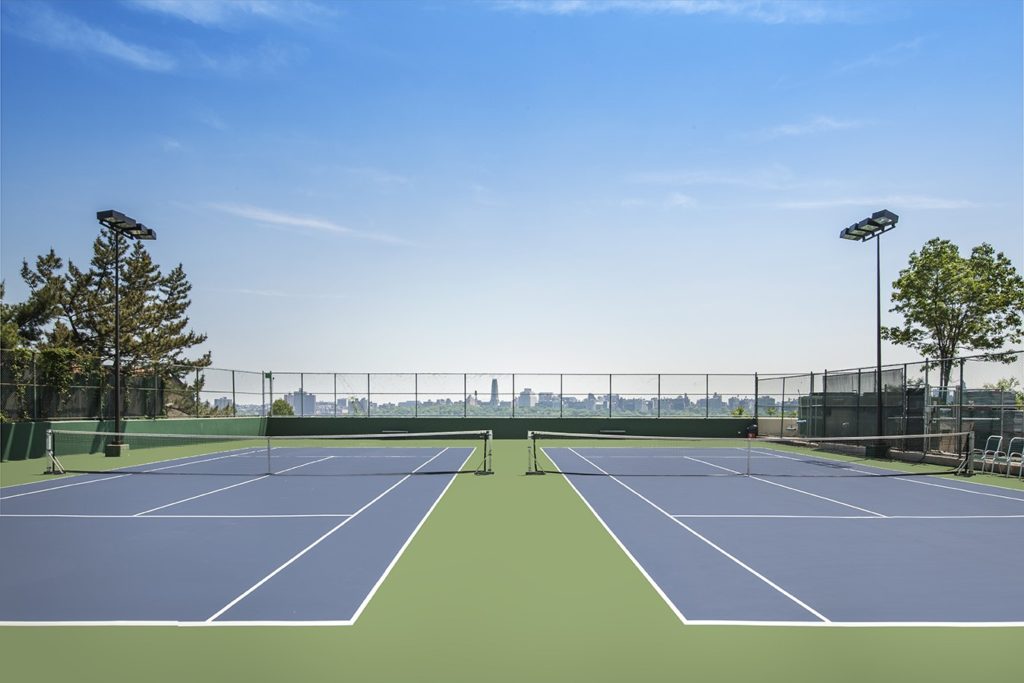 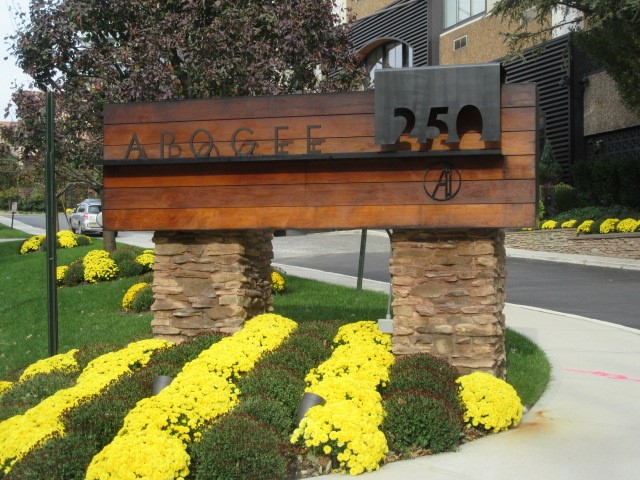 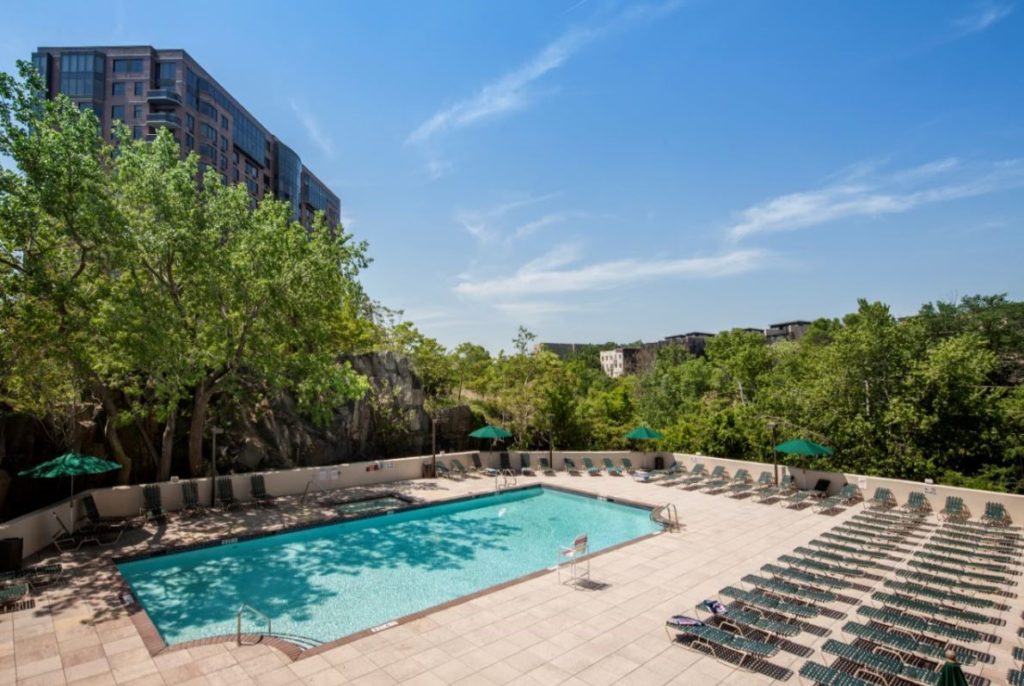 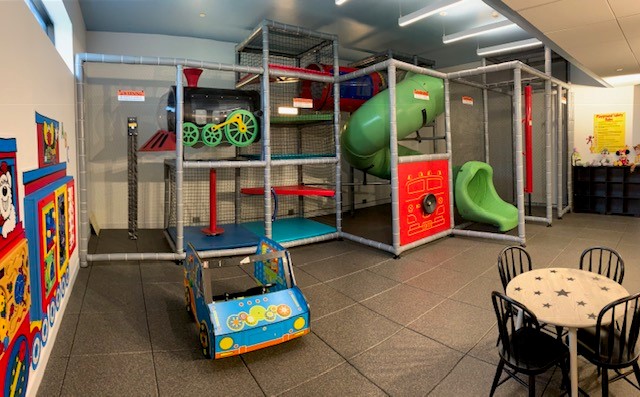 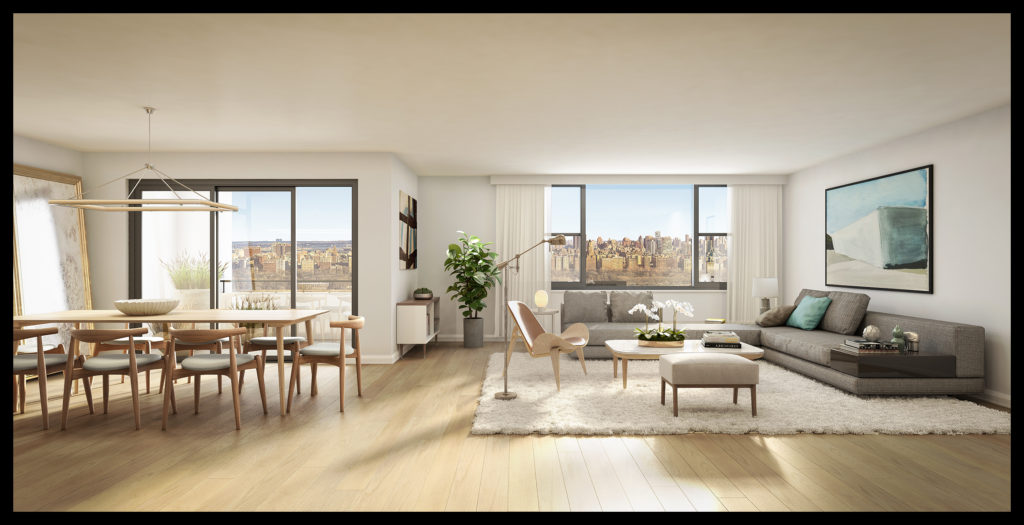 Sitting atop the Palisades Cliffs, the tower already provided residents with views of the Manhattan skyline and access to commuter points. But the co-op sought to raise home values and elevate the property with its expansive renovation.

The results include a revamped three-story main lobby that features a new entryway and a dramatic, four-sided living green wall, along with a two-sided fireplace, a 24/7 concierge desk and an on-site dry cleaner. The project also called for a host of new amenities, such as an expanded and updated fitness center and a separate yoga and Pilates studio.

Other offerings include a children’s playroom, community room, library and a residents’ lounge with “genius bar,” according to a news release. Apogee also boasts a heated outdoor swimming pool, kiddie pool and hot tub, along with lighted tennis courts and barbeque area with views of the waterfront below.

The building’s exterior renovations are highlighted by an updated façade with a canopy fashioned out of a glass, metal and wood marquis.

“My vision was to bring a stylistic, Manhattan feel to the building through design and new luxury amenities that would elevate residents’ lifestyles to a modern day, resort-like experience,” said Kratchman, whose design firm is based in Manhattan. “It all comes together in a sophisticated ‘SoHo vibe’ that perfectly complements the building’s suburban, park-like location and close-knit, family-friendly environment.”

All told, Dalton said Apogee’s board of directors sought to make improvements that “not only brought Apogee in line with neighboring properties, but in many cases exceeded the market.”

“We firmly believe that goal has been achieved by modernizing the building from top to bottom without any financial burden to our existing owners,” she said. “It has created a scenario where Apogee now offers the same level of luxury, comfort and appeal as new-construction Gold Coast condominiums, all while retaining its inherent value when compared with pricing at area properties.”

The ability to complete the project without assessments to existing owners is a testament to the building’s financial stability, she said. The co-op also noted that, over the past eight years, monthly maintenance has increased only 1.5 percent on average — due mostly to increases in real estate taxes — and that residents can deduct about 45 percent of their monthly maintenance costs from their personal income taxes.

Following the modernization and rebrand, sale prices at Apogee have increased an average of 12.9 percent, the news release said. But the property currently has one-, two- and three-bedroom homes on the market ranging from $209,999 to $568,888, which Dalton said still offers a competitive value to other buildings.

Homes range from 796 to 1,646 square feet, while residents have access to a bus stop across the street that provides express service to Manhattan. The property also benefits from its proximity to the Port Imperial ferry terminal in Weehawken and the George Washington Bridge and Lincoln Tunnel.