A rendering of Latitude, the two-building office campus in Parsippany that Vision Real Estate Partners and Rubenstein Partners plan to redesign, rebrand and integrate — Courtesy: VREP/Nelson

But how the new owners will “unify” and transform the properties is another step altogether — one that they say will create a distinct campus unlike anything else in the marketplace.

“Each building stood on its own,” said Sam Morreale, founder and managing partner of Vision Real Estate Partners. “But clearly the grander plan was to try to acquire both properties and create the synergism of putting the entire destination project back together as one singular asset.

“And we think putting it back together is more than a one plus one. It’s one plus one makes three, if you will.” 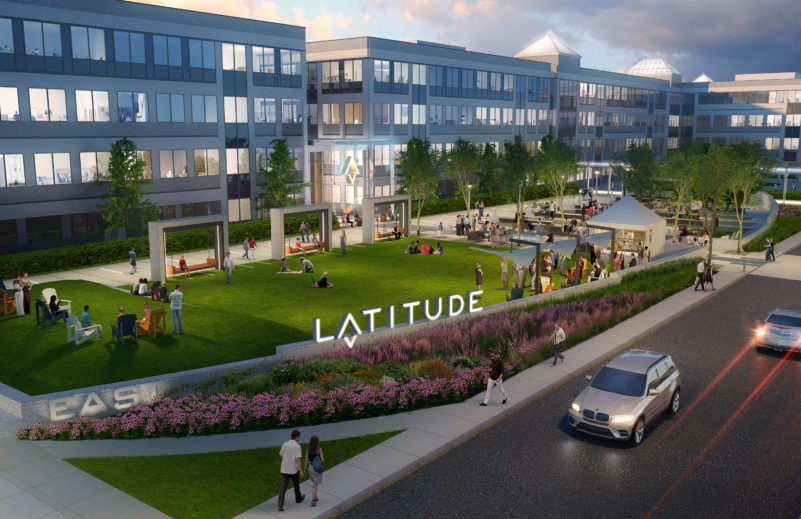 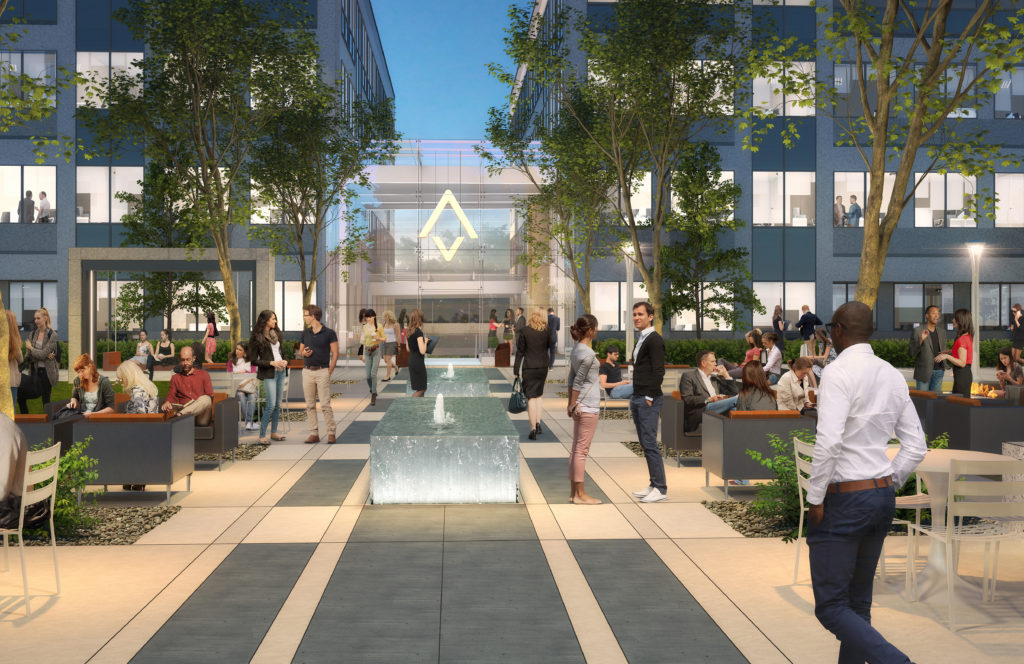 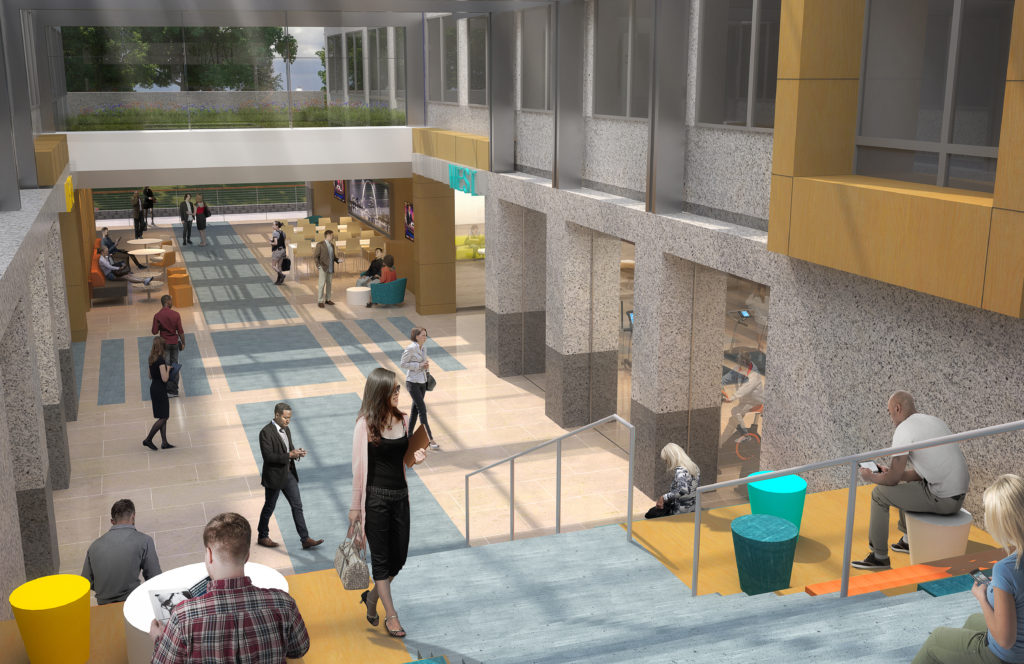 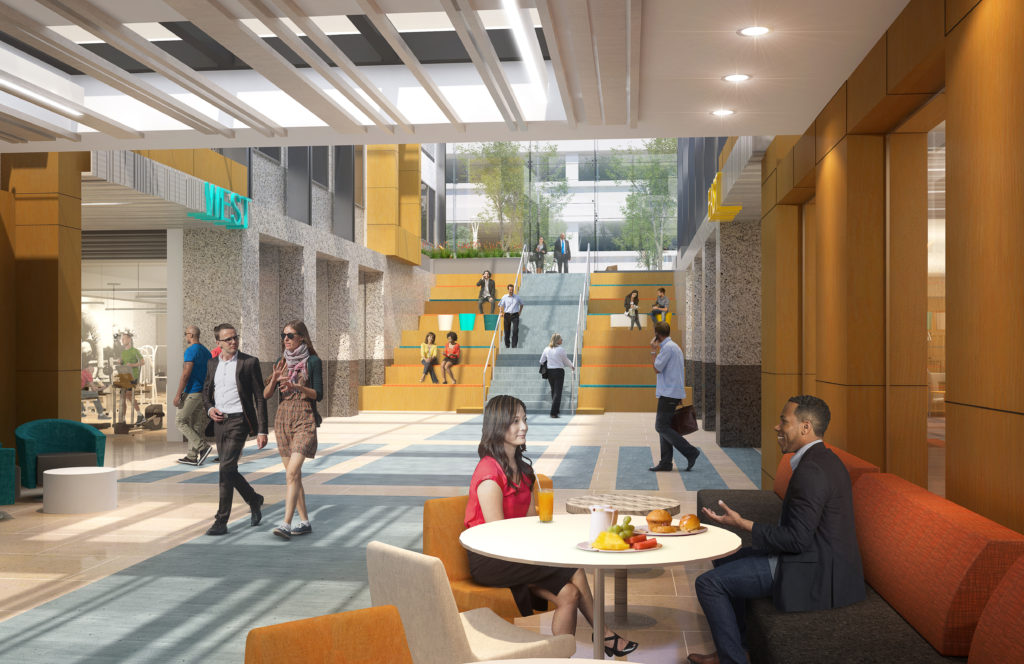 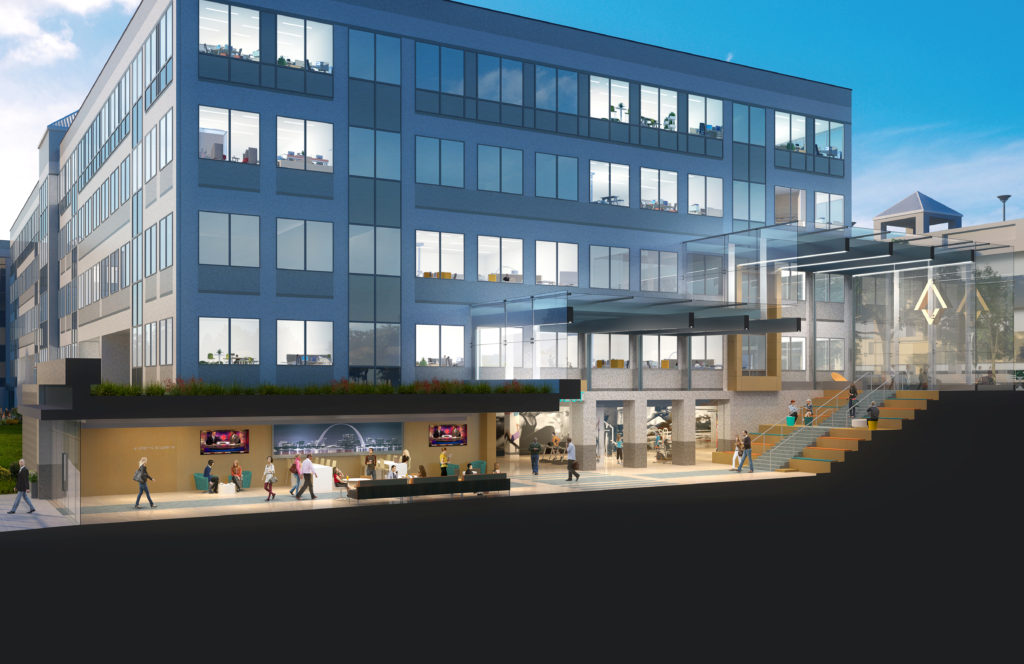 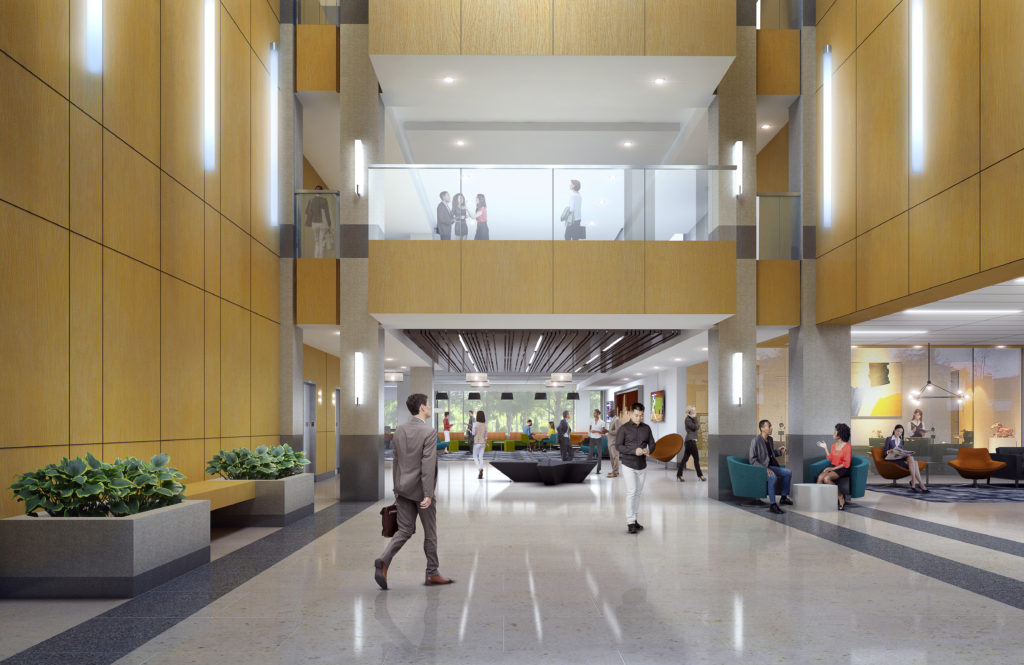 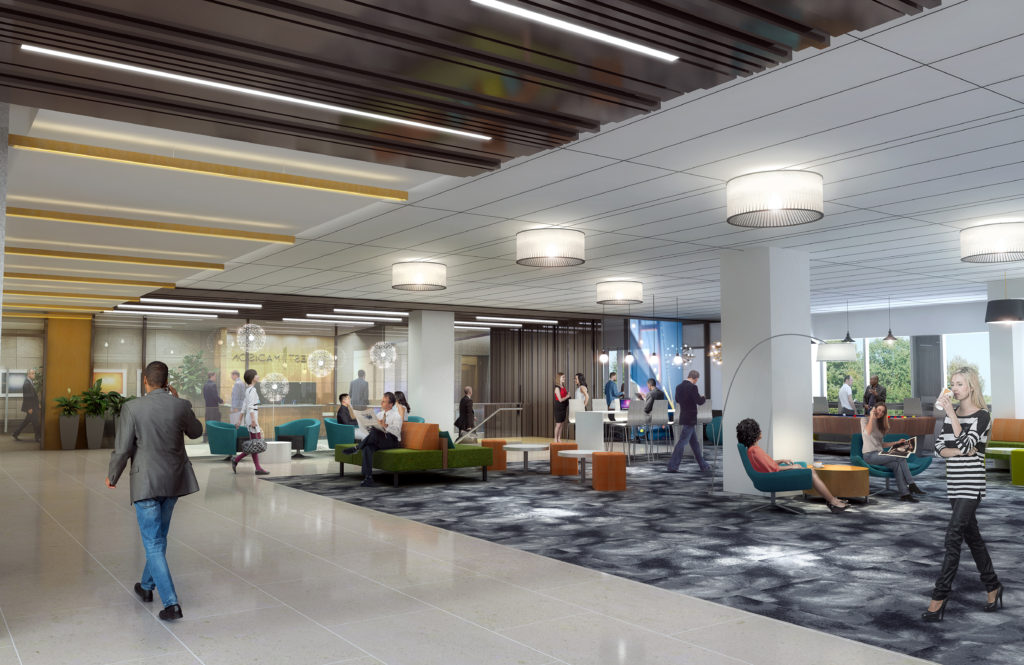 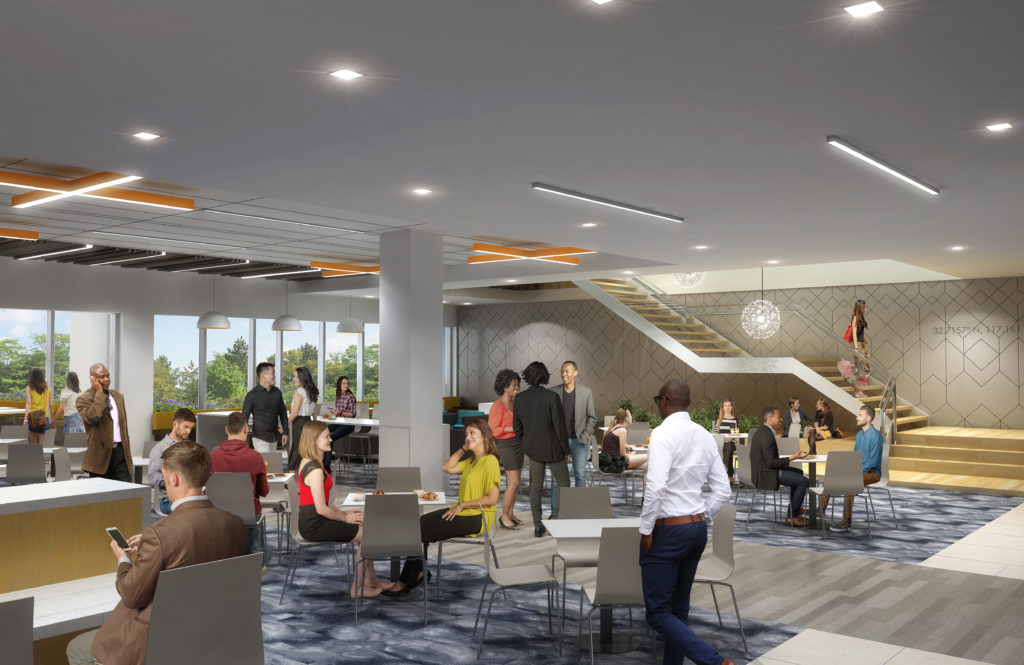 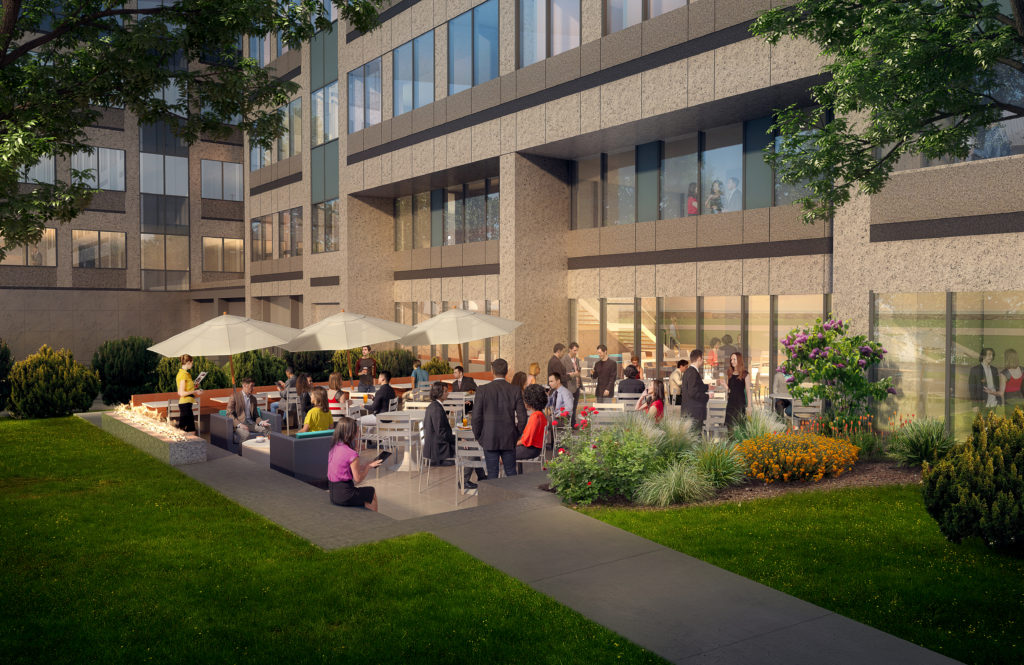 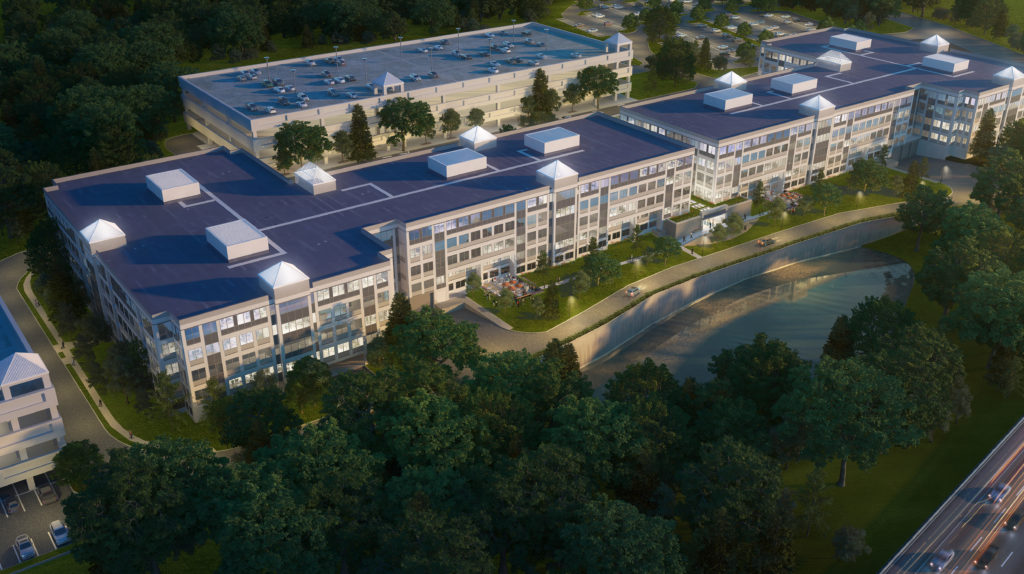 The investors have unveiled how they will redesign, rebrand and integrate the former Morris Corporate Center IV east and west buildings, which they acquired earlier this year in separate transactions. With their new name for the roughly 700,000-square-foot campus — Latitude — they hope to channel the straight line, east-to-west layout of the mirror-image buildings along Interpace Parkway.

They will do so with a new “coast-to-coast” concept that is reflected in not only the new branding, but in the selection of high-end, hospitality-inspired amenities that will be offered throughout the campus. For instance, Morreale said the property will feature multiple dining options and multiple fitness spaces, which could reflect different regions of the U.S., depending on whether they are on the east or the west side of the campus.

“There will be a whole experiential and hospitality feel to this property,” Morreale said “Given the scale, it allows itself to have a lot of differentiation over the size of the property.”

Rich Wilden, director of design with NELSON, said the concept emerged as it became clear that VREP and Rubenstein would acquire both buildings. The design firm would have sought to upgrade the either building individually with modern, experience-based amenities and an open, collaborative layout, but the ability to stretch the concept across both campuses “actually created something that was greater than the sum of its parts.”

Among the highlights is a 2,500-square-foot, glass-enclosed space between the east and west buildings that would essentially connect them and serve as both the crossroads of the combined structures and the exterior spaces, Wilden said. Plans also call for the area to include a grand staircase to connect the lower and upper levels.

“That space is being imagined as being an all glass cube to really modernize the image of the property,” he said. “And as we looked at the property as being sort of linear in east-west direction, parallel to I-80, we used a metaphor that Vision Real Estate Partners kind of latched onto of this connectivity coast to coast and this translation of the American landscape within the property itself.

“It’s a guiding design principal to really create a distinctive identity different from what the property was in the past and from the rest of the Morris Corporate Center campus and the rest of the corporate properties in the region.”

The team then sought to expand a vast exterior space into a front courtyard as an additional amenity and gathering point for employers and their workforce.

Overall, the designers aimed to create “a very comfortable and varied environment” with a wealth of options for dining, recreation, events, work and downtime — all of which would encourage building users to spend more time on the campus.

In the process, the team brought on the high-end design firm FRCH to “redesign the visual identity of the property and integrate that very cohesively with the architecture throughout the campus,” Wilden said. The result was a new logo and icon that reflected the concept of coast-to-coast connectivity, travel and the American landscape, partly through graphics such as an old fashioned compass point.

That branding will be incorporated into signage, wayfinding elevators and other parts of the campus, all of which may have subtle variations based on different locations.

“We’re doing it in a subtle way, but it’s a way to give a story to the property,” Wilden said. “It’s a large pair of buildings. Historically, they were literally separate buildings, although they’re next to each other, and part of the big thrust is connecting them and gaining the added strength of combining the buildings into one property, physically and metaphorically.”

Other structural changes will include knocking out what had been tenant space on the south end of the west lobby, which had created a closed-in feel, and converting it to open amenity space. Wilden said that will create a hotel lounge-style space that opens up the lobby and allows it to capture additional daylight from the exterior window line.

Demolition on that space has begun, Morreale said, noting that he expects the overall capital improvement plan to take 12 to 15 months. Aside from the new look and feel of the campus, he expects the reboot to benefit from the fact that it has around 500,000 square feet available.

As Morreale noted, “large blocks of quality space are not necessarily readily available in the greater Morris County marketplace. So we feel this is an asset worth providing to the market.”

“We’re looking to service the marketplace and we think we can do that both with the larger corporate tenants that are seeking high quality blocks of space, as well as the smaller, more entrepreneurial companies that would love to be in that level of product and still have space that could be divided appropriately for them.”

The effort marks the latest high-profile joint venture for Vision Real Estate and Rubenstein Partners. The firms have successfully repositioned the 194-acre former Alcatel-Lucent campus in the Whippany section of Hanover, where it built state-of-the-art headquarters campuses for Bayer HealthCare and MetLife Investments.

VREP and Rubenstein have also repositioned The Crossings at Jefferson Park, a 525,000-square-foot office park in Whippany, thanks in part to the addition of a new central amenities complex. The firms last year sold the campus to Barclays, the anchor tenant at the property.

“There’s a commonly held idea that suburban offices lack both a sense of place and a social center,” said Steve Card, principal and Mid-Atlantic regional director for Rubenstein Partners. “The reality varies from property to property, but we do believe there is considerable value to add through investments in social, recreational and business amenities at best-in-class suburban assets.

“Latitude is a great example of the kind of amenity development and programming we’re undertaking more broadly across several geographically diverse assets. We’ll be pleased to see this project come to fruition, and also to see the concept expand across the regions we invest in, with the development of new standalone amenity centers, premier outdoor spaces, and other plans tailored to the individual properties.”

In Parsippany, the firms announced their acquisitions of the properties in January and February. In doing so, they were not only purchasing a large campus with value-add potential, Morreale said, but potentially capturing “an opportunity to get high-quality raw material, come in and put a vision plan in place to make it a highly desirable asset for this evolution of its leasing.”

“There’s just some inherent synergisms that are going to be created, and the properties will be working in concert with one another as opposed to potentially working against one another,” he said. “This is an asset that we’ve known since its inception. It’s the newest building in the greater Parsippany market and it was a high-quality building when it was built — and it’s time for it to have some re-gentrification based upon the demands of today’s workforce.”