The Connell Co. recently unveiled Round Table Studios, a new flexible workspace and social club at its flagship 185-acre business campus in Berkeley Heights known as The Park. The venue provides more than just office space and workstations to its members, who also have access to everything from fine dining and evening bar service to personal trainers and fitness classes. — All photos courtesy: The Connell Co.

By late summer, less than three months after unveiling what’s known as Round Table Studios, The Connell Co. had all but leased up the new flexible workspace in Berkeley Heights.

It may in fact be a sign of growing interest in co-working in New Jersey and that employers are taking a cautious approach in their return to the office. But Sharon Lammens believes Round Table Studios is meeting another need in the market by offering users more than just “a place to sit” — from fine dining and evening bar service to personal trainers and fitness classes.

“(With) co-working in general, they’re missing the hospitality piece … where it’s more than going through the mechanics of people coming in, getting a key and sitting down,” said Lammens, the general manager at the 44,000-square-foot venue. “This is really going to be a community, it’s going to bring all of the rich amenities that we have.”

It’s why Connell says the offering, part of its 185-acre business campus known as The Park, is as much a social club as it is a flexible work area. The company has leaned into that concept by offering “social memberships” to those that aren’t necessarily renting a desk or an office suite in the space, but want access to the perks and services that RTS has to offer.

For instance, social memberships are available to companies that lease space in one of The Park’s five traditional office buildings — or even a spouse of an RTS member.

“You feel a belonging here and then all of those amenities tie into that belonging,” said Lammens, who joined Connell last year with two decades of hotel industry experience. 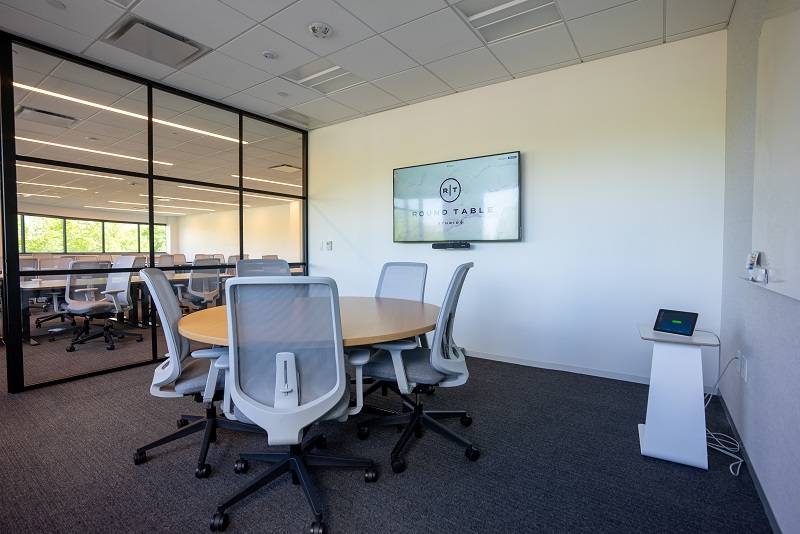 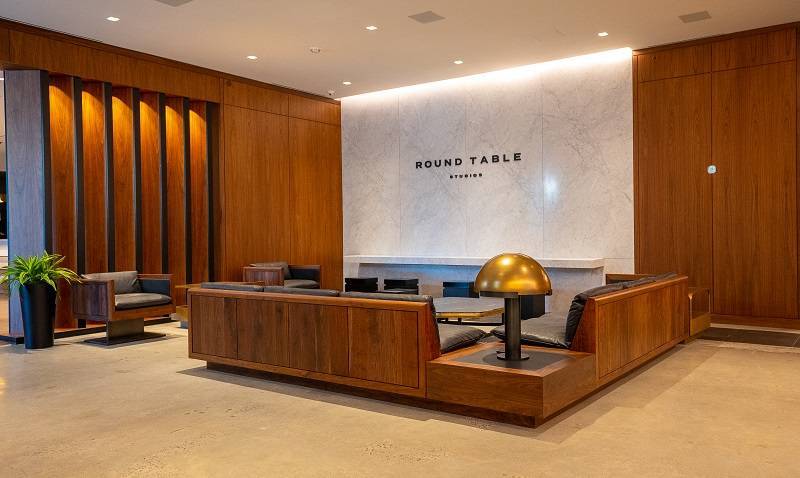 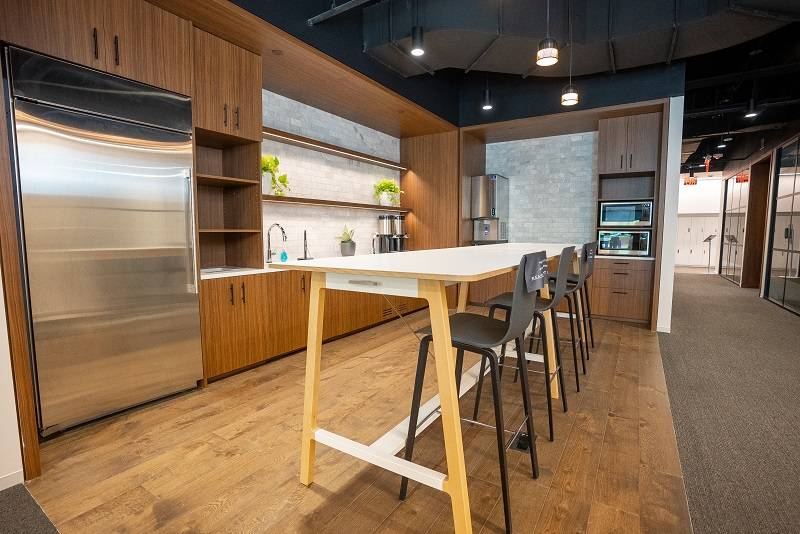 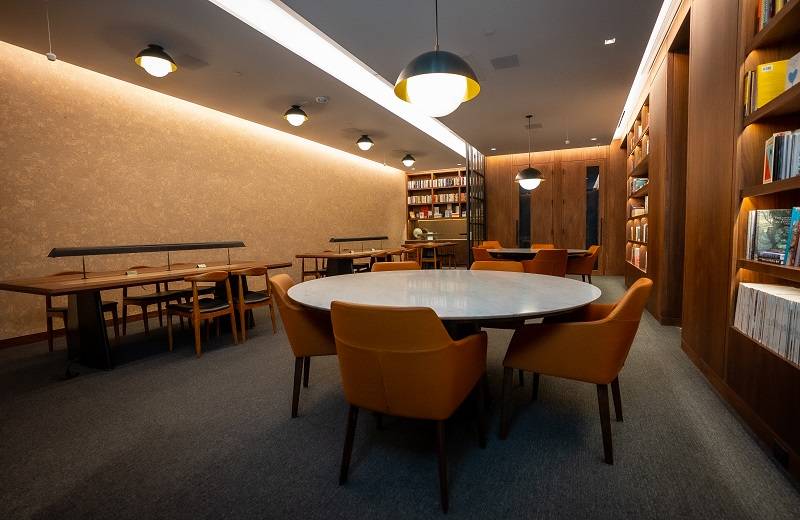 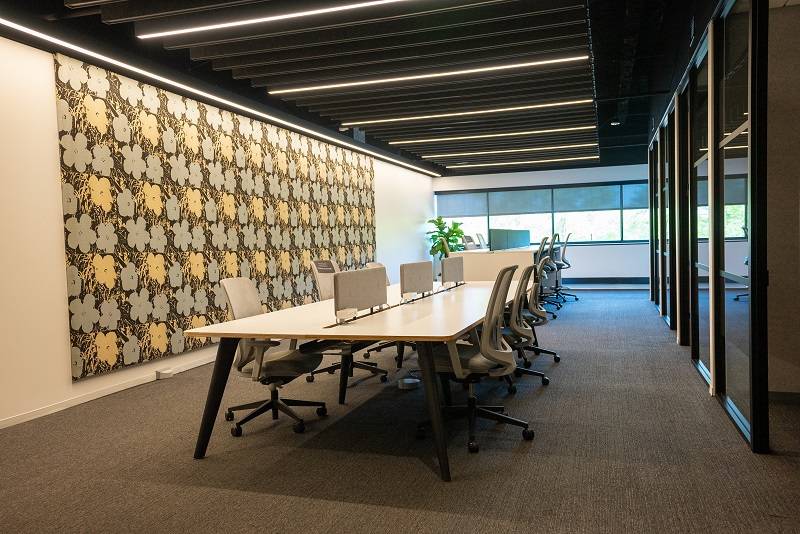 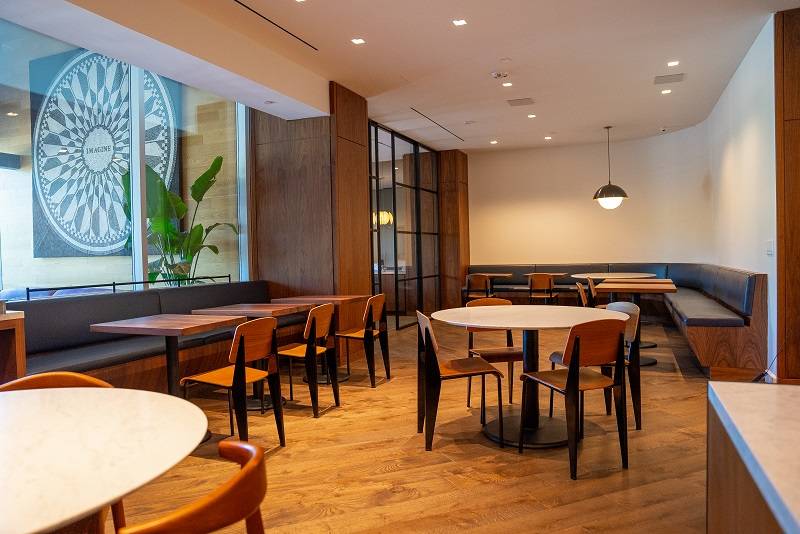 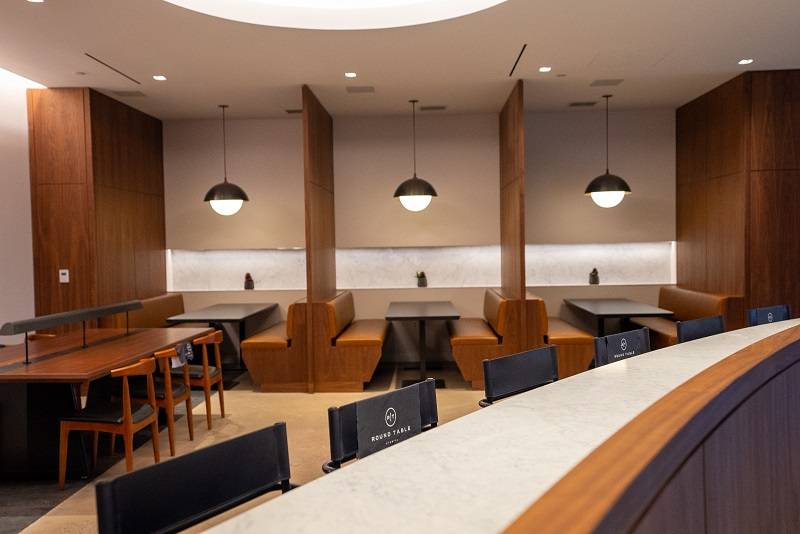 With some 400 total seats, Round Table Studios features co-working options from desks and tables to lounge-style furniture scattered throughout a library, an upscale café and dining area known as RT Farms and other spaces. The venue at 200 Connell Drive also has a mix of private offices, with sizes ranging from single-person suites to larger studios for more than 40 employees, along with on-demand conference and collaboration rooms.

Connell’s formula has seemingly struck a chord with the market. As of late August, the firm said about 90 percent of the space was under contract, having signed up roughly 400 members from a range of industries including life sciences, financial services and consulting, among others.

Notably, almost all of those tenants will be using co-working or flex space for the first time.

“A lot of companies are reading about co-working and HR departments are learning about co-working, so they’re now doing exploratory work,” Shane Connell, executive vice president at The Connell Co., said during a recent tour of the space. “So they’re coming to us, they’re coming to multiple locations. And New Jersey doesn’t have that many options that are branded, so when they come here, either they’re starting with us or they’re ending with us. It’s definitely a different reaction.”

Connell said RTS — which the firm opened in partnership with CBRE’s Hana group and for which Gensler was the architect of record — saw steady traffic throughout the summer, despite the recent spike in COVID-19 cases and renewed concerns about returning to the office. The team was encouraged not only by the interest, but the feedback it received from users that were able to project how they would use the different spaces. For instance, he pointed to a nonprofit that was interested in a 40-person studio with desks and meeting areas, but also gravitated to the main library as a space that could host monthly fundraisers.

Other potential tenants have inquired about leasing a 20- or 40-person suite “but want 10 or 20 extra cards” for their employees, he said, referring to the social membership option.

“That’s what I think is appealing — to have both uses,” Connell said.

At RT Farms, members can choose from an array of grab-and-go items such as salads, sandwiches, snacks and fresh juices, along with prepared dishes and made-to-order meals from the same high-end culinary team that has helped overhaul food service at The Park. The space also features a coffee bar that transitions to cocktails from 4 to 7 p.m. daily, along with catering and specialty members-only dinners during the week.

With all of its items, RT Farms has placed a premium on wellness, using organic ingredients and providing labels with QR codes to allow diners to see their nutrition data. It’s a common theme for a campus that also has an on-site health clinic, acres of outdoor park space and a 12,000-square-foot, New York City-style fitness club known as the Fieldhouse.

According to Connell, a social membership includes access to RT Farms, its evening bar services and its Supper Club programs. It also allows for consultations with The Park’s on-site nutritionist and unlimited use of the Fieldhouse, plus access to personal trainers and strength, yoga and Pilates classes.

Members will find themselves in the midst of Connell’s ongoing, $400 million makeover of The Park, which sits just south of Interstate 78 about 30 miles from Manhattan, as it seeks to bring new uses to the existing hotel and 1.5 million square feet of office space. In March, local officials approved the rezoning of the property, paving the way for Connell to start construction next year on a pedestrian-focused, urban-style development called The District that will include more than 300 apartments and offerings such as duckpin bowling, a Southern California-style taco stand and a brewery and beer garden with rooftop event space.

Connell’s plans also call for modernizing The Park’s four other office buildings, having done so at 200 Connell Drive with the introduction of the Fieldhouse, the health clinic and a revamped dining area.

“When you look the Googles, the Amazons and the Apples of the world, they’re all building these types of campuses,” Connell said. “So we see this as a campus that’s comparable to a collegiate campus and that of a West Coast tech firm, but it’s for (multiple) tenants. The Googles of the world do it for just their employees. We’re doing it for everyone.”

In the meantime, the firm is preparing to welcome its traditional office tenants back to the campus, where the daily overall population is about 20 percent of what it was pre-pandemic. Connell expects that number to grow in September and October, which will only be helped by the arrival of Round Table Studios.

“Now whether you’re a member here as an individual or a flexible member in the studios, or a large company, you can attract the talent because we’re going to give you the culture and the amenities that you want,” he said.

Already, Connell said several of The Park’s existing larger tenants have expressed interest in gaining access to the co-working and social club. And they now have the option of renting several spaces inside RTS — including the library, training room and a second-floor “pitch room” with high-end videoconferencing and stadium-style seating — on an hourly basis with catering.

“We’ve tried to hit all the categories of that demand … so it’s another amenity that they can come in and rent that room instead of having to invest in their own when they only use it once a month,” said Steve Kilroy, Connell’s senior vice president of hospitality and marketing. “So they don’t need it in their own space. They can use it with our space and then we can cater their lunches or their meetings.” 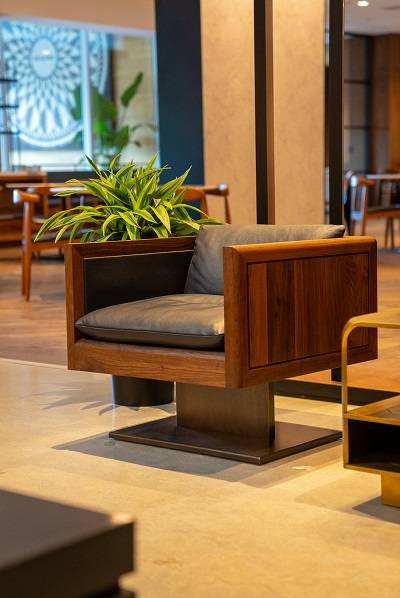 Shane Connell is quick to note that Round Table Studios is about more than a single space at 200 Connell Drive. Rather, The Connell Co. has set out to create a lifestyle brand unto itself, going so far as to launch a new upscale furniture line that is now on display at the co-working and social club and elsewhere on its flagship campus in Berkeley Heights.

Designed by David M. Sullivan, the custom-made line known as RTS Collective by DMS could also soon be available to other real estate owners.

“If you look at all the studies, whether it’s architects or designers or landlords, they’re all talking about delivering a hospitality approach to the work environment,” Connell said. “And it’s not just service, it’s also the look and feel. Everyone is trying to do it, but we see the product that people are delivering — they’re saying the right thing, but they’re not delivering the right thing. So we think there’s a real opportunity to say ‘You know the answer, let us help you solve the problem.’ The furniture line is a part of that solution.”

Sullivan, an acclaimed New York-based designer, is also spearheading Connell’s transformation of the 185-acre campus known as The Park. It will be no surprise, then, to see the Round Table Studios brand infused throughout the property, including a planned 328-unit apartment building that will be known as The RT.

Connell noted that the furniture line will ultimately be available to owners of co-working spaces, office buildings, hotel and multifamily lobbies and amenity spaces and restaurants and bars.

“This furniture line is an extension of all those uses, and any landlord or developer who wants to have this lifestyle brand can use it,” Connell said.