Fidelco Realty Group is revitalizing a well-known office tower in downtown Newark at a cost of more than $30 million, with plans that include a sweeping physical upgrade, the addition of a new bar and restaurant and the creation of flexible workspace to serve technology startups. — All renderings courtesy: Fidelco/Perkins Eastman

Marc Berson and his team at Fidelco Realty Group have become “very comfortable” with the north end of downtown Newark, he said, pointing to three buildings that the firm has renovated or acquired over the last two decades.

Today, the properties include a mix of high-end office space, a distinctive home for Rutgers Business School and a technology hub for Audible, the audiobook maker, inside a historic church.

“I look at the three buildings and we really participated in major change,” said Berson, Fidelco’s chairman. “And we used the buildings with their history, but we clearly made them into very special, unique buildings going forward.”

That experience is a key driver of the firm’s next major project in the area — the transformation of a well-known, 18-story office tower at 550 Broad St. Construction is well underway at the nearly 300,000-square-foot property, the former First National State Bank headquarters, which it acquired in 2019 and now plans to revitalize at a cost of more than $30 million.

Namely, its plans call for a top-to-bottom update of both the building’s aesthetics and its infrastructure, along with a new glass façade and the gutting, rebuilding and expansion of the lobby, complete with a multistory bar and restaurant with some 300 seats, Berson said. Fidelco is also delivering a premium five-story, 90,000-square-foot block of contiguous space at the top of the building, while it aims to create at least one floor of flexible workspace that will serve growing firms in technology and other sectors.

All the while, it has completed more than a dozen new leases and renewals since taking over the property. The Millburn-based firm, which has tapped Perkins Eastman to guide the renovations, expects the work to be complete by late 2022.

“Our view of it was that Newark and prospective tenants weren’t going to be satisfied with the same old, same old,” Berson said. “You had to change it.” 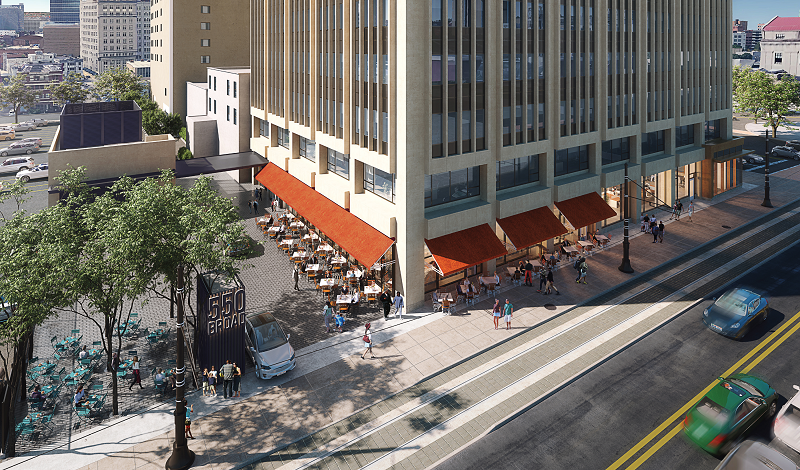 To be sure, the Newark native is a longtime investor and business leader in the city. His firm’s recent efforts around northern Broad Street date back to 2004, when it purchased One Washington Park and set out to renovate the 17-story brick building. It would go on to sell the bottom 12 floors to Rutgers University, which made a major investment to create a sleek new location for its business school.

It was 2007 when Fidelco acquired 494 Broad St., a 115,000-square-foot office building across the street, ahead of an initial upgrade and a subsequent, $60 million overhaul that added a new 10-story parking garage, a Cablevision call center and a new skin on the entire building. Its purchase of the former Second Presbyterian Church on James Street came about a decade later and provided an opportunity for Audible, a tenant at One Washington Park, to transform it into an 80,000-square-foot office and collaborative space known as the Innovation Cathedral.

When 550 Broad was listed for sale in 2019, Fidelco found several compelling reasons to add to its holdings in the neighborhood. Its three buildings were fully leased, Berson said, “so we saw the opportunity to be able to attract additional tenants.” He also pointed to the plans to renovate Washington Park and rededicate the space as Tubman Square, along with ongoing redevelopment projects in the surrounding blocks.

“There was just an awful lot, as we viewed it, that suggested that this was really special,” he said.

While the COVID-19 crisis slowed its plans, Fidelco managed to begin construction last year. That work has included basic improvements such as new mechanical systems, modernized elevators and the restoration of the building’s limestone façade, along with upgrades that will allow for open, contemporary office layouts.

The firm is also revamping the lobby at 550 Broad, in part by doubling the width of the space and installing new glass entrances at both ends in order to provide a clear view from Broad Street to the rear of the building. That will create what Berson describes as “an internal street,” acting as a public space and better connecting the tower to the neighborhood.

Plans also call for lounge seating and a bar, which will effectively serve as a waiting area for what Fidelco expects will be a large, upscale restaurant on the building’s lower level. The firm is now is discussions with a restaurateur on a concept that will accommodate more than 300 diners, making use of elements such as the original bank vault in the basement.

“I don’t know how you define vibe, but I know if you run a restaurant, you need that vibe in order to succeed,” Berson said. “And I think it’s true more than ever here in Newark, particularly coming out of COVID.” 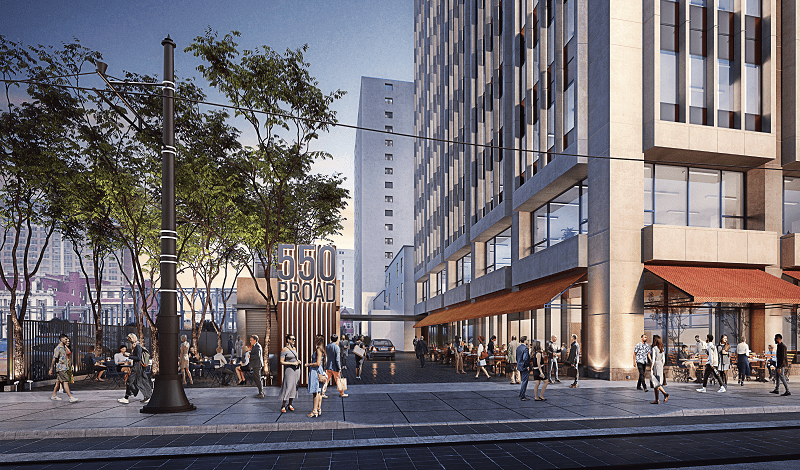 The restaurant is tied to another key change — the construction of a new drop-off and valet area behind the building, which will create better access for both diners and office tenants. He noted that vehicular access from Lombardy Street, which runs along the north side of the building, is currently limited due to the light rail tracks that run between the sidewalk and the roadway, but said the new pathway should provide a solution.

Berson feels that access will make the restaurant more of a destination for those who have plans at the nearby New Jersey Performing Arts Center or the Prudential Center. What’s more, a planned sidewalk will connect Lombardy Street to Fulton Street at the southern end of the block, also helping improve circulation around the building.

“Those are some of the business issues that I think we have answers for that will differentiate 550 from much of our competition,” he said.

The firm hopes that 550 Broad is also a destination for startups in technology and other growth industries. Berson believes that having a full floor of flexible workspace will appeal to the types of users that have come out of Newark Venture Partners, the Audible-led fund and accelerator based at One Washington Park, which launched in 2015, and other programs in the city.

Both flexible space options and traditional offices will be key to such companies going forward.

“A lot of young, growing companies can’t just walk in and sign a 10-year lease and know where they’re going to be,” he said. “They’re growing too fast, so they need the flexibility to ramp up and not be locked in as their needs expand.”

The renovation has coincided with continuous leasing activity since Fidelco acquired the building. The firm has inked new leases with tenants such as Jacoby & Myers, Local Initiatives Support Corp. and Peri Software Solutions, along with renewals with the likes of Wells Fargo, The Wight Foundation and Buchanan Ingersoll & Rooney PC. It has also intentionally turned over some spaces while consolidating tenants on the lower floors, allowing it to improve each level while clearing the five uppermost floors in hopes of attracting an anchor tenant.

“Clearly, knowing what COVID has done, we’re being extremely thoughtful and cautious about making this a building that people want to be in,” Berson said.

The value of a pre-construction and development manager