A rendering of the view down Observer Highway, under a proposed 2.3 million-square-foot redevelopment plan for the Hoboken rail yards site. — Courtesy: LCOR

State officials could soon make a decision on key flood protection measures in Hoboken — one that could make or break a long-awaited, 2.3 million-square-foot redevelopment of the rail yards at the southern edge of the city.

LCOR, which is NJ Transit’s master developer at the site, says the mixed-use plan hinges on where the state Department of Environmental Protection opts to build a flood wall as part of a federally funded resiliency program. One option under consideration is an 11-foot barrier with access gates that would run between Observer Highway and the proposed site, which the developer says would make the project unbuildable after more than a decade of planning.

A spokesman for the DEP said the agency is still reviewing options for the flood protection measures, but that a decision is expected in the near future.

In the meantime, executives with LCOR have stayed focused on what they can control — engaging stakeholders such as NJ Transit, city officials and residents on what the firm feels is the best solution. The project currently calls for a mix of office, residential and retail space and public improvements along Observer Highway, which runs along the northern edge of the site.

To that end, the firm is pushing for a plan under which the flood wall would run along the southern part of the development, allowing its project to blend seamlessly with Observer Highway.

“What we control is continuing to advance concepts that allow for the successful integration of the wall into the development,” said Brian Barry, senior vice president with LCOR. “And we’re focused on trying to find the solution where everyone wins. That’s where we spend most of our time with respect to this issue.” 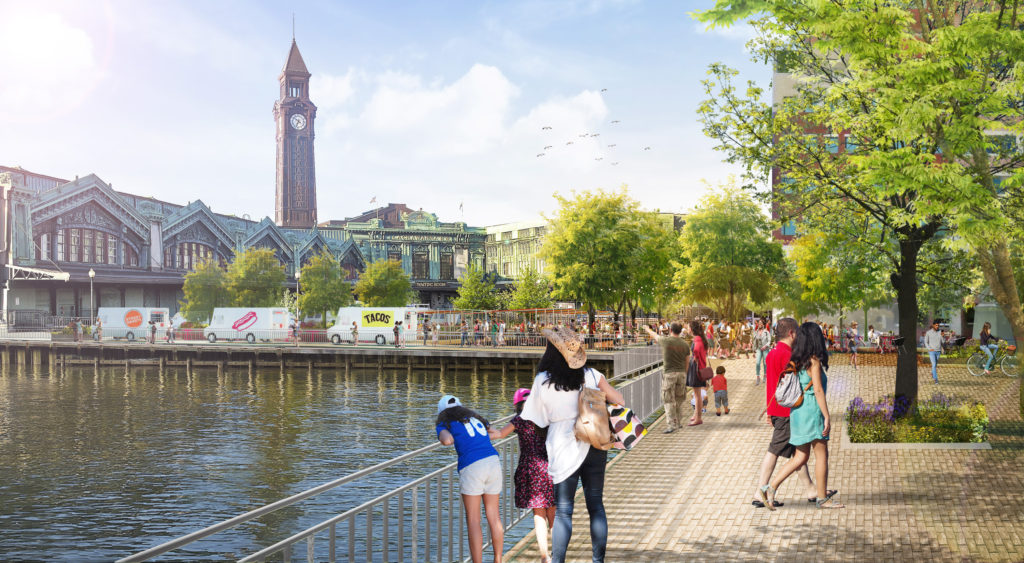 Redevelopment of the Hoboken rail yards is more than a decade in the making, as city officials and NJ Transit sought to transform what they saw as underused property. As currently proposed, the project calls for 1.5 million square feet of office space, 583,000 square feet of residential space and 129,000 square feet of retail and public space, along with the activation of Warrington Plaza and the ferry terminal building improvements.

The project would also transform Observer Highway into a boulevard-like environment and come with improvements to NJ Transit’s infrastructure.

Barry said the project has the potential to “effectively transform the southern gateway of the city,” tapping into the cachet of Hoboken and the demand for urban working and living options. That’s not to mention the benefits of a transit hub that serves roughly 50,000 commuters daily, with access to the quickly changing West Side of Manhattan.

But the project has grappled with the aftermath of Hurricane Sandy, prompting stakeholders to consider additional flood protection measures since the 2012 storm. In summer 2013, the U.S. Department of Housing and Urban Development launched the Rebuild by Design competition to develop resiliency and flood protection concepts for areas that were affected by the storm, including several Hudson County municipalities.

The agency last fall released $230 million in funding to be overseen by the DEP and the state Department of Community Affairs, following an environmental impact statement that was finalized last summer. The report presented both options for what’s known as the southern alignment — namely, the area around the Hoboken railyards — including the option that LCOR said would be prohibitive to its project.

Under HUD’s funding guidelines, the flood protection project must be complete by fall 2022. DEP spokesman Larry Hajna said last week that the state, DEP and NJ Transit have not concluded their evaluation of the two options and that field work that will inform the design is ongoing with the agency’s consultant, AECOM.

In May, Hoboken Mayor Ravinder Bhalla sent a letter to the DEP and the Department of Transportation requesting an update. He also expressed concern about the possibility of an 11-foot barrier separating Observer Highway and the redevelopment area.

“The southern alignment for the (Rebuild by Design) project, depending on where it is located, has the potential to jeopardize the viability of the Hoboken Yards Redevelopment Plan, and greatly hinder economic development opportunities for New Jersey Transit to subsidize their operations,” Bhalla wrote, noting that his highest priority was protecting residents.

Still, he added: “I look forward to continuing working collaboratively with both of your departments to identify a southern alignment that accommodates both the mass transit and economic development interests of New Jersey Transit in a manner that does not compromise the RBD-HR flood protection plan.”

Other stakeholders, including key county and state officials and the Engineers Labor-Employer Cooperative, have also voiced opposition to the 11-foot wall under what’s known as Option 2.

For all of the uncertainty, Barry said “I would say we’re in a better position today” than last year “because I think we’ve been able to garner a seat at the table and be part of the discussions.” That has resulted from working collaboratively with the DEP, NJ Transit and the city in hopes of “finding an alternative solution that allows for the integration of a resiliency barrier into the development.”

“It requires collaboration and cooperation from all parties involved,” he said. “And I think that’s the piece where, if we can get back to that point — where we’re all rowing in the same direction — you can see this move from where we are today to that next step of becoming a reality.”