A rendering of the redesigned façade and entryway at One Gateway Center, part of a sweeping overhaul of the landmark Gateway office complex in downtown Newark – Courtesy: Gensler/Onyx Equities LLC

A year after acquiring three of Newark’s four Gateway buildings, an investment group was preparing to unveil its detailed plans for transforming the landmark office complex.

Commuters in the complex’s busy pedestrian tunnels were among those to get a sneak peek.

“We started to put out some of the materials in the concourse to give people a preview of it, with some pretty amazing graphics,” said John Saraceno of Onyx Equities, which is part of the complex’s new ownership group and is spearheading the sweeping redevelopment project.

“You could feel the buzz of people walking through the concourse.”

Saraceno, an Onyx co-founder and managing principal, is no stranger to reviving New Jersey’s aging stock of office buildings. But the firm’s plans for One, Two and Four Gateway Center — which total about 1.6 million square feet — and the adjoining network of commuter walkways is among New Jersey’s most highly anticipated commercial real estate projects.

Those plans began to take shape in early December, when Onyx released new renderings and details about the now-imminent overhaul. Among other changes, the redesign calls for Gateway’s first-ever street-facing retail space, which would span roughly 10,000 square feet at the base of One Gateway and will become part of a new grand entryway to the complex. 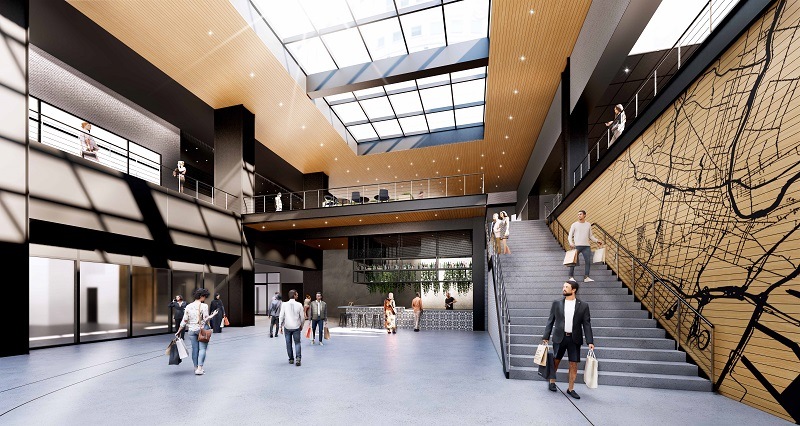 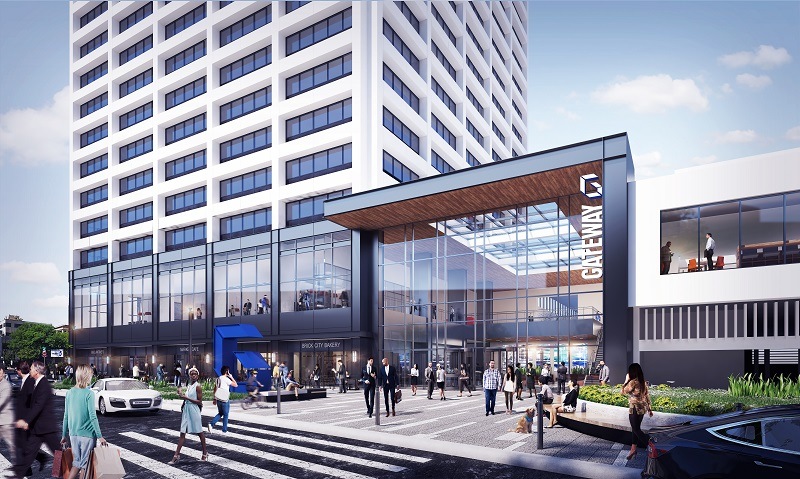 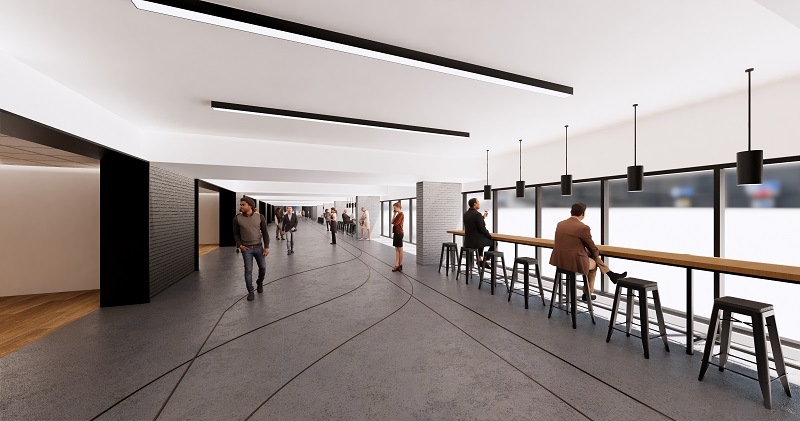 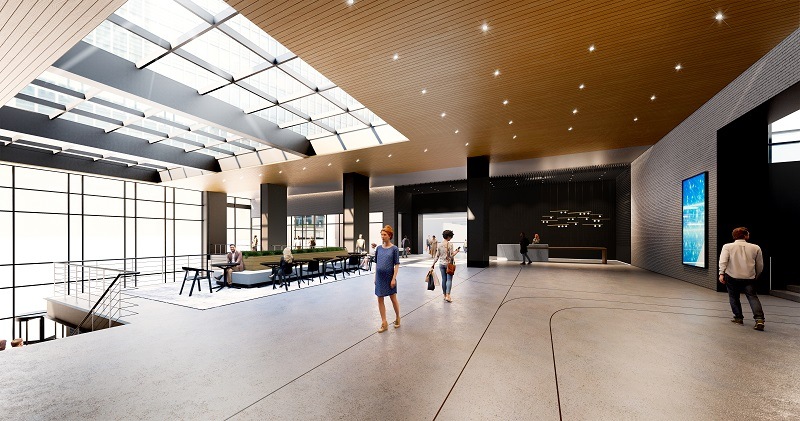 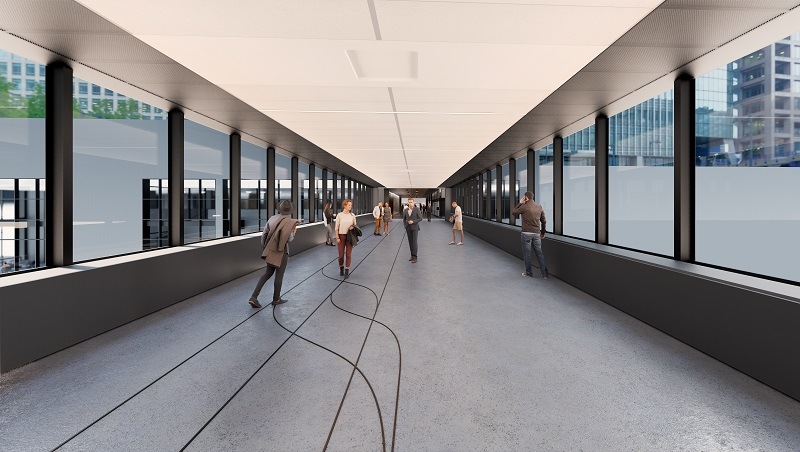 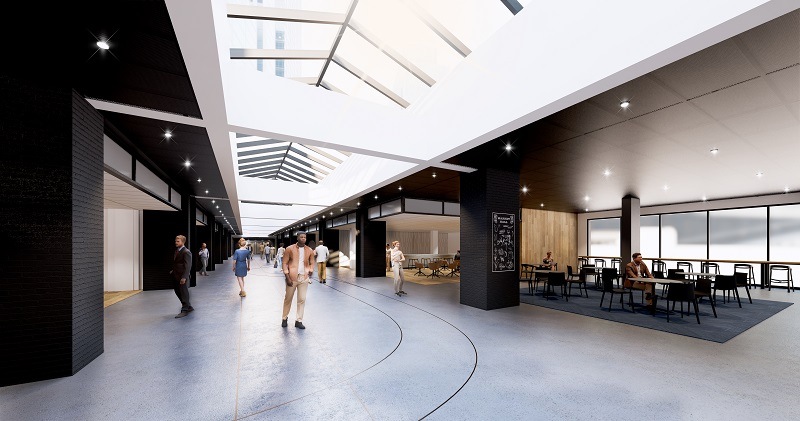 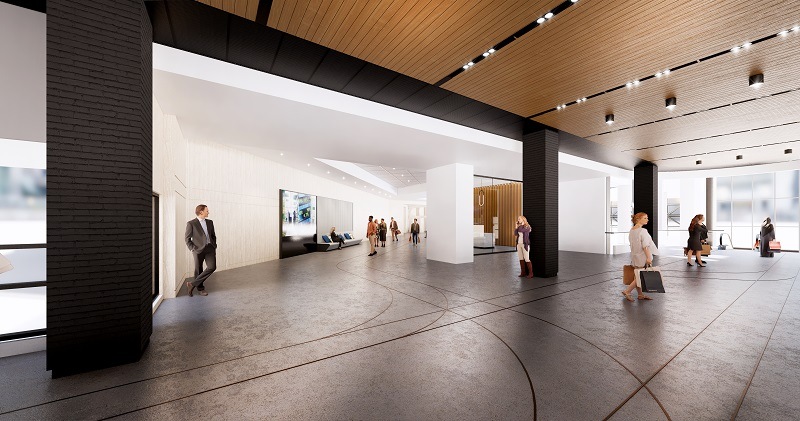 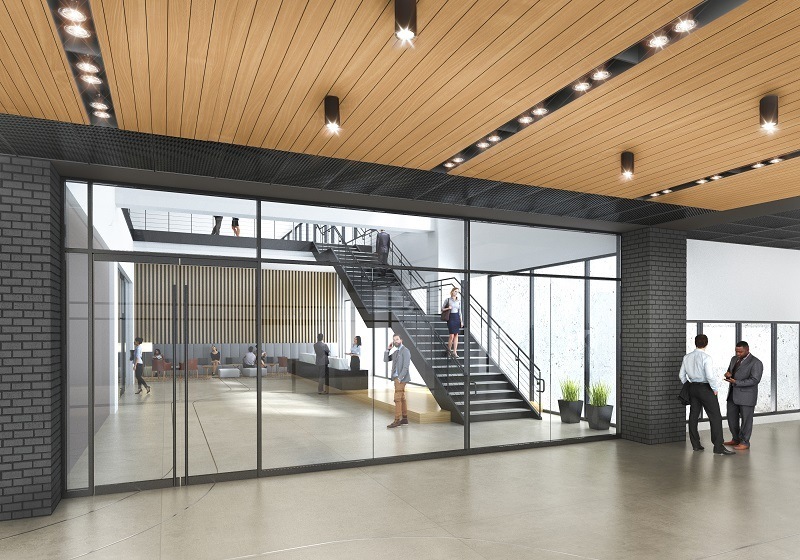 Onyx Equities and a design team led by Gensler have envisioned a revamp of the lobbies within One, Two and Four Gateway Center, as well as the 1,400-linear-foot network of walkways that connect to Newark Penn Station, which are used by tens of thousands of daily commuters. Gensler’s design for the concourse evokes a railroad theme with a replica “track” that runs along the floor of the sky bridges and tunnels, guiding pedestrians from one destination to the next. — All renderings courtesy: Gensler/Onyx Equities

Onyx and a design team led by Gensler have also envisioned a revamp of the lobbies within the buildings and the 1,400-linear-foot network of walkways that connect to Newark Penn Station, which are used by tens of thousands of daily commuters. But, as Saraceno noted, the project is equally tied to improving the infrastructure of the buildings that Onyx and its partners control, which is no small task. The development team has identified tens of millions of dollars of deferred maintenance across the three office towers, Saraceno said, accounting for a large chunk of the $30 million to $50 million that they expect to invest.

“You can have a wonderful concourse with good retail, but if you can’t heat and cool the building and the elevator doesn’t run, it doesn’t do you a whole lot of good,” Saraceno said. “So when you’re allocating your dollars to the situation, you’ve got to allocate to fix the buildings as well, which no one sees, but the tenants feel.”

Details of the redesign come a year after Onyx and its partners — which include Garrison Investment Group, Axonic Capital LLC, Taconic Capital Advisors and Prudential Financial — assumed control of One, Two and Four Gateway. That meant the partnership could also control Gateway’s signature concourse, which had become tired and outdated amid decades of disjointed ownership.

The long-awaited overhaul will now look to reverse Gateway’s original design, which sought to allow commuters to get to work in Newark without ever stepping onto the street. But the project is also meant to answer the demand for new high-end office space in the state’s largest city.

“There’s been a big, pent-up demand of people trying to understand the timeline and what the scope is, what it’s going to look like, what it’s going to feel like,” said Blake Goodman, an executive vice president with JLL and a member of Gateway’s leasing team. “So being able to unveil that is going to create a huge buzz within the market and I think generate a lot of activity.”

The new-look concourse will include about 5,000 square feet of converted retail space, all of which will be modernized and reconfigured to offer new spaces for tenants and high-end food and beverage options. Onyx and Gensler also hinted at a sleek color palette, updated windows and modern textures that will unify the four-building complex.

That theme will be on display within the new jewel box lobby at One Gateway, which sits directly opposite Newark Penn Station and will become a focal point for street-level activity.

“It’s really an exciting opportunity to re-engage the complex to be a more mixed-use workplace and retail community experience and provide a unique destination that reflects back on the heart of Newark,” said Dana Nalbantian, a member of the design team and principal with Gensler. “We really want to tie the city of Newark with the complex, as opposed to making it a separation.”

That has also meant drawing on elements of the city’s industrial roots and its identity as a transportation hub, she said. For instance, Gensler’s design evokes a railroad theme with a replica “track” that runs along the floor of the sky bridges and tunnels, guiding pedestrians from one destination to the next.

The overhaul is now set to begin in earnest and will likely span 15 to 20 months, Saraceno said. He noted that the concourse, which is in fact privately owned and controlled by the investment group, will remain open during that time in order to accommodate both the Gateway tenants and other Newark employees that cut through the walkways to get to work.

“There’s a certain responsibility to maintain that and not close it,” Saraceno said. “If we could close the concourse, we could definitely get it done more quickly, but that’s not something that we’re open to doing. There may be periods of time where pieces of it are closed, but we’re not going to close the concourse entirely for 12 months and attack it because, at the end of the day, we just don’t think that’s the right thing to do.”

A second phase of the project revolves largely around the concourse at Four Gateway, which Saraceno hopes will be a destination unto itself. That work could begin at any point during the course of the first phase, he said, provided Onyx finds the right operator for what it sees as “a food and beverage environment, a restaurant with outdoor dining that sits across the street from the Prudential Center and activates Mulberry Street.”

“That’s more tenant-driven,” he said, adding: “Generally speaking, we think that probably comes to fruition when we’re wrapping up the first phase, because you’ll really see what we did, and we think the amount of interest that that will spur will lead to the type of tenant that we want at the base of Gateway Four.”