Paterson Mayor André Sayegh had no qualms about latching onto the success of the hit Broadway musical “Hamilton.”

After all, he believes the city’s heritage is one of its greatest assets — one that will help it attract new investment to places such as the Great Falls Historic District.

“Paterson is where Hamilton set the stage,” Sayegh said. “And it’s where we are — just like our founding father — vision-driven, and we’re looking to play to our strengths in Paterson.”

That means the city is very much open for business.

“Clearly we’re in growth mode and we are looking to leverage legacy assets and transform them into legacy projects,” he said, later adding: “(We) want people to come to Paterson and see for themselves what’s happening. We feel like other municipalities are running out of real estate or maybe pricing themselves out, so Paterson could be that next frontier.”

It was a welcome message to the hundreds of attendees at last month’s Redevelopment Forum, the annual conference hosted by New Jersey Future. Sayegh, who is in his first year as Paterson’s mayor, preached a philosophy of big-picture planning, adaptive reuse and collaboration with the private sector — setting the tone for the full-day event in New Brunswick. 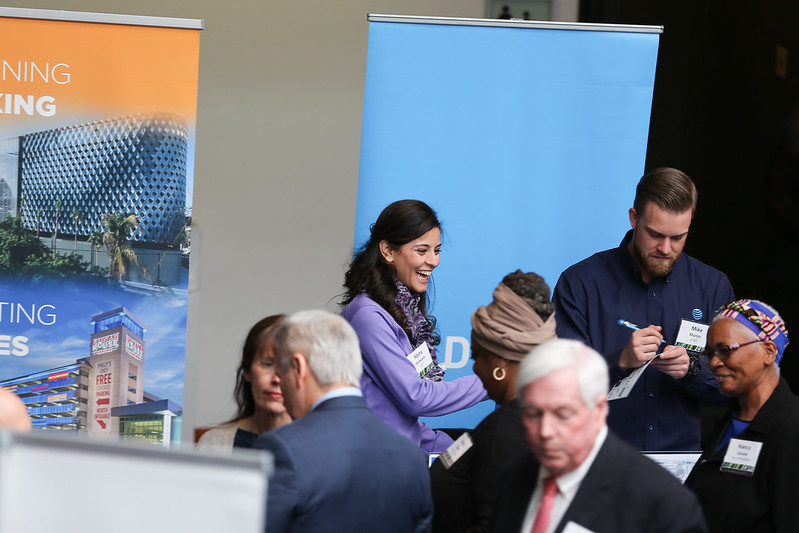 Aisha Glover, the CEO of the nonprofit Newark Alliance, also cited the importance of thinking holistically. Leaders in Newark “have had a propensity in the city to focus on projects as one-offs, and that has actually been a disservice” to the municipality and its residents, she said. But the city’s economic development team is “now looking at the downtown core” that runs from Newark Broad Street station to Newark Penn Station and includes the Passaic River waterfront.

That is effectively the same corridor that Newark highlighted in last year’s bid for Amazon’s second headquarters, Glover said, and the city is now “actively pitching that core as an innovation district” that includes amenities such as parks and retail.

“It’s critical that we no longer look at it project by project,” said Glover, who spearheaded the city’s pitch for Amazon HQ2, which resulted in being shortlisted as a finalist. “It drove home the fact that we need to be selling the city instead of continuing to allow developers and brokers to ‘sell’ individual sites.”

Eugene Diaz, a principal partner with Prism Capital Partners, noted that New Jersey’s cities are poised to benefit from the changing preferences of both residents and businesses.

“Everybody wants to be more communal, so we see cities in these areas growing again,” said Diaz, who joined Sayegh, Glover and others on the forum’s opening panel discussion. “We see people wanting to be more part of a community — and I think that’s an incredibly important aspect of how we’re approaching redevelopment today and why you’re starting to see this rebirth and reinterest in some of the urban core or some of the more polycentric nodes around the state where development can happen.”

Those preferences have also translated into opportunities for suburban areas that can embrace redevelopment within their downtown or can at least recreate the urban environment somewhere within their borders. Prism is hoping to do exactly that with ON3, its planned redevelopment of the former Hoffmann-LaRoche campus in Nutley and Clifton, where it aims to build a walkable, mixed-use campus over more than 116 acres.

But many municipalities are still slow to embrace those demographic shifts as a means to redevelopment, Diaz said, adding that developers that are looking to make investments are “fighting the same battles today that we did 10 and 15 years ago.” That includes concerns — many of which are unfounded — about new multifamily development leading to an influx of school children and clogged streets.

He also noted that New Jersey is still a home rule state and that economic development is a local issue, but “what we haven’t seen happen yet is a significant realization at the municipal level that the world has changed.”

“It starts on the ground,” Diaz said. “So if you are an elected official and you have a train station in your town, if you haven’t densified the zoning district around your train station at this point in time, you’re derelict.”

The Prism co-founder complimented Sayegh on his stance when it comes to embracing change. He also argued that municipalities need strong leaders to fight back against a vocal, often misinformed minority of residents who are resisting change in their town.

Other panelists cautioned against being too heavy-handed as a municipal leader and not inclusive enough when it comes to community input.

“I think that’s how it becomes reactive,” said Jennifer Vey, a senior fellow with the Brookings Institution. “If you’re not building that groundwork, that trust with people creating their own vision for their communities, then they can’t see how the development may or may not fit into that vision and goals that they have for a community.”

For his part, Sayegh said community engagement is critical to any efforts to rebuild Paterson. In addition to building up the Great Falls Historic District, he sees the potential to highlight the city’s large Muslim population and its vibrant business sector in South Paterson.

He also pointed to the vastly underutilized area around the city’s train station, where he hopes to “send a message to developers that we are open for investment.”

“We talk about good bones,” Sayegh said. “Now it’s time to put some meat on those bones.”

Perhaps as much as any other city, Paterson is primed to benefit from the state’s newly proposed historic tax credit program. The municipality, the nation’s first planned industrial city, is known for its abundance of silk mills and other historic properties that could become targets for developers seeking to repurpose such buildings.

“That can go a long way in places like Paterson, Trenton, Camden and other places,” Sullivan said. “It’s a great opportunity for you to put a little extra emphasis on capturing the authenticity and the integrity of a place that historic buildings can bring to the table.”