Officers of IOREBA joined panelists at the dais for the organization’s annual Developer Night, which drew hundreds of industry leaders to the Teaneck Marriott at Glenpointe. — Courtesy: William Neumann Photography

Sellers of high-end office and industrial buildings both have reason to be hopeful in New Jersey — even if the two asset classes have followed starkly different paths in recent years.

That was a key message from insiders earlier this week during an event hosted by the Industrial & Office Real Estate Brokers Association, or IOREBA. As part of the group’s annual Developer Night, a panel of experts gauged the health of both property types in the Garden State, including the level of investor interest as the current economic expansion continues.

“The capital markets appetite for industrial is phenomenal,” Jeff Milanaik, the Northeast regional partner for Bridge Development Partners, said during the March 26 event. He noted that the prospect of rising interest rates may not necessarily curb investor appetite in the asset class, given that the thriving warehouse and logistics sector has attracted all-cash buyers in recent years.

“They are looking for yield and they’re looking for yield in an extremely stable asset, and that’s where the industrial fits,” Milanaik said. “And we are all blessed to be in one of the strongest markets — the New Jersey port market. Everybody wants to be here, but nobody can figure out how to get here.”

If anything, he said rising interest rates could ensure that industrial supply remains limited in New Jersey, forcing developers to take a more measured approach in financing new projects.

Those supply constraints have helped preserve stability even as prices rise in New Jersey’s industrial sector. Vacancy in northern and central New Jersey was under 4 percent at the end of 2017, according to JLL, following 9.5 million square feet of net absorption for the year.

“It’s healthy, and if you did that same snapshot in 2007, it wasn’t that way,” said Ben Rosen, vice president of leasing and development for Duke Realty. “There was a lot more vacancy, a lot more spec development, a lot of merchant builders.

“So with where we’re at right now, I genuinely believe we’re in a pretty healthy, sustainable position. And even if … there were a black swan event or something like that, we’re not over our skis too much.”

Kevin Welsh, executive managing director with Newmark Knight Frank, said the industrial and office sectors are on “opposite ends of the spectrum” when it comes to investment sales. But he said “the world is flush with cash” from an overall capital markets perspective, largely because of what has been a sustained period of low interest rates.

And while a long-expected increase could ultimately quell investor appetite, Welsh cited one factor that could in turn help the market: federal tax reform. He said many companies have been cutting costs in recent years, but the newly enacted corporate tax cut could help drive new capital spending and ultimately drive new demand for office space.

That bodes well for the prospect of pushing investors toward the office sector. 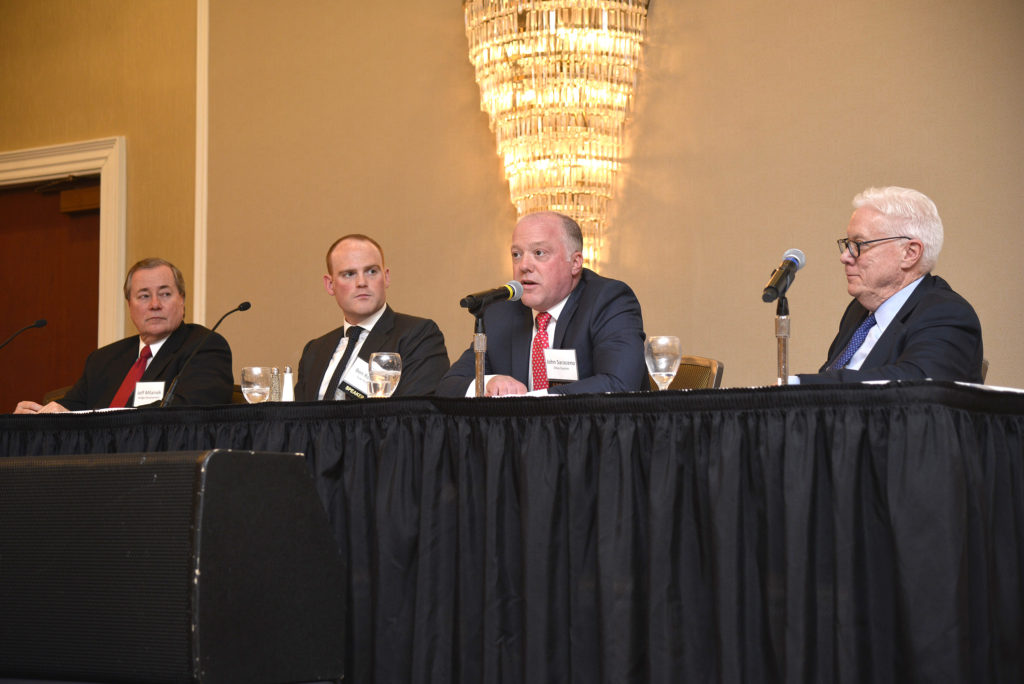 “In the latter part of the cycle … they become more risk-averse, so what do they start looking at?” said Welsh, who leads NKF’s tristate capital markets team. “In the office space, they start looking at cash flow. Cash flow becomes really, really important to them and it really changes the dynamic of the investment profile.

“So we believe we’re going to see more core and core-plus office investments becoming in vogue” among institutional investors who have money to put out, Welsh said. Those investors will be looking for well-located, high-end buildings “with a stabilized credit income stream … so if you have a product of that profile, we think you’re going to do well and we think institutions are going to play in suburban office space.”

He added that many buyers are still seeking “high-quality value-add.”

John Saraceno, co-founder and managing principal of Onyx Equities LLC, said it remains to be seen if institutional investors return to the Class A office sector.

“I think there’s been a very significant barbell approach to investing in the state,” he said, noting that Onyx was met with tremendous demand last year when selling the headquarters of Daiichi Sankyo in Basking Ridge. The value of the 307,000-square-foot complex, which Onyx gutted and redeveloped, benefited by having a credit tenant that occupied the full building.

“But trying to trade middle market, multitenant office buildings is a much more significant challenge,” Saraceno added. “And even if you do improve them, I still think there’s a challenge.

“So it will be interesting to see if the institutional marketplace returns. I hope so,” he said. “I’m a little bit skeptical, but I do agree that there’s a lot of money chasing not too many deals. And in the industrial space, there’s not that much to actually do, so this money has to go somewhere and it will be interesting to see how wide that circle gets and what it encompasses.”

Despite being one of the most popular events in New Jersey’s commercial real estate industry, this year’s IOREBA Developer Night began with a somber note.

Prior beginning the program, the organization paused to honor Todd Anderson, a well-respected industry veteran and a panelist in prior years. Anderson, a principal with The Hampshire Cos., died suddenly earlier this month at age 58.

“This past week, we lost a previous panelist and a very, very close friend of mine and many of you out in the audience,” Simson said. “Many of us our heartbroken. And he will be missed by many of you and all of the people that were so fortunate to have an opportunity to meet and spend time with Todd Anderson.”