A suite inside the new 152-room Residence Inn by Marriott in Jersey City — Courtesy: Cahn Communications

A stretch of downtown Jersey City that has become known for its high-end apartment buildings has added a new high-end hotel, following the completion of an extended stay Marriott property by two area development firms.

The joint venture of Ironstate Development Co. and Panepinto Properties on Monday officially unveiled its new 152-room Residence Inn by Marriott. Executives and public officials gathered to officially open the property, which sits at 80 Christopher Columbus Drive above the Grove Street PATH station, touting it as a sign of progress for the city in more ways than one.

For instance, U.S. Sen. Robert Menendez said the fact that Marriott has placed an extended stay hotel in downtown Jersey City “means the city has become increasingly a destination location, which says a lot in and of itself.” He pointed as an example to the need for engineers and work crews to travel to the city for all of the development that is taking place, along with corporate anchor tenants that bring employees to the city for training and other functions.

“It’s more than a celebration of a building in the middle of Jersey City,” Menendez said. “It’s about all of the economic potential that it brings.”

Jersey City Mayor Steven Fulop called the hotel’s opening “another significant step” for a changing neighborhood. The area, which includes the Newark Avenue corridor, has grown in recent years to include a restaurant row, a closed off pedestrian area and new development.

The arrival of the hotel is validation of efforts to both bring new street life to the neighborhood and promote development that isn’t directly on the Hudson River, Fulop said.

“(If) you think about where it’s located, most of our hotels in Jersey City are located directly on the waterfront because of the asset of looking across the river and viewing Manhattan,” he said. “This is the first time in many years that we’ve seen one open in another neighborhood away from the waterfront.”

The 14-story hotel, which was designed to hang over a PATH station entrance at the corner of Columbus Drive and Marin Boulevard, is the latest piece of a larger mixed-use development in the Grove Street neighborhood. Along with the Marriott, the plans by Ironstate and Panepinto include nearly 1,500 luxury apartments and ground-floor retail space, most of which has been completed and occupied. 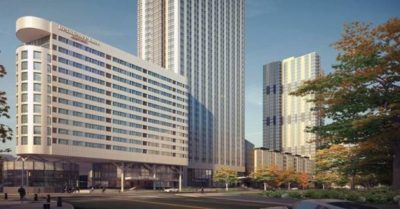 Meant to appeal to both business and leisure travelers, the hotel includes studios and one-bedroom suites offering kitchens with high-end finishes and appliances. Other amenities include complimentary breakfast, 360 square feet of meeting space, a full-service bar and fitness center.

Residence Inn is the fourth-largest brand within the Marriott-Starwood portfolio, said Diane Mayer, vice president global brand manager for the concept. She called it “a great representation of how our brand is growing,” noting that the Residence Inn portfolio is moving beyond its suburban roots and now has the majority of its pipeline in urban markets.

David Barry, president of Ironstate, said the partnership was “confident the hotel will appeal to business and leisure travelers, both as a standalone destination and as a launching point into New York City.” As he led Monday’s ceremony, he said getting to the ribbon-cutting event was very much a group effort.

“It takes a lot of people and a big team to build a project like this, and we’re very proud of our team at Ironstate,” Barry said, also recognizing architecture firm Minno & Wasko, along with the project’s construction and financing partners.

But Menendez said its takes the vision of developers such as Ironstate and Panepinto to engineer the type of transformation that is now taking place in downtown Jersey City, which looked quite different 20 years ago.

“It was always a hardworking, gritty city with tremendous history, but it isn’t the shiny city that it is today,” Menendez said. “And it is that today because of a variety of things.

“Some people just see a site and that’s all they see — they see what’s there and what’s around it. Others have a vision of what it could be,” he added. “So today is another example of a vision of what can be. And Dave Barry and Joe Panepinto and all of the associates that were part of this development have a vision.”