Kushner Real Estate Group has opened the second of three towers at its Journal Squared project in Jersey City, bringing another 704 luxury apartments to a site that will ultimately include 1,838 units and 36,000 square feet of retail and restaurant space. The development has led the transformation and ongoing revitalization of Journal Square, the onetime commercial and cultural hub of Jersey City. — Courtesy: Qualls Benson

Jonathan Kushner thinks back to the original thesis behind Journal Squared, his family’s pioneering development project in Jersey City. They believed the site, located atop a major transit hub, would feed off the New York City economy while providing more than 1,800 new, upscale apartments to residents at roughly half the price of what they’d find across the Hudson River.

That strategy is alive and well and, if anything, has only been reinforced over the past year.

“We continue to think that it’s a great business model for us in New Jersey and Hudson County,” said Kushner, the president of Kushner Real Estate Group. “What is amazing is that, even during the pandemic, when people are not commuting to New York five days a week, we still have enormous demand here. That speaks volumes about the neighborhood. People want to be here not just for the train — people want to be here because this is a great community.”

That demand has translated into a crush of leasing activity at Journal Squared, where KRE Group and its partner, National Real Estate Advisors, recently unveiled the second of three towers at Pavonia and Summit avenues. Through early June, only about three months after the launch of leasing at phase two, renters had snapped up more than 50 percent of the building’s 704 apartments.

It all points to continued momentum for Journal Square, a historic neighborhood that once served as Jersey City’s commercial and cultural epicenter and where a long-awaited revival is now coming into view. Seemingly undeterred by the COVID crisis, developers have started construction or obtained approvals for some 13,000 additional units in the area, part of a growing list of ambitious projects that will coincide with new place-making initiatives by city officials.

“One thing you’ve seen through the pandemic is that Jersey City has outperformed, relative to New York City, in a lot of ways,” said Jeremy Kaplan, KRE’s chief operating officer, “because you get a lot of the fully amenitized, luxury buildings and you have all of the street-level experiences you want … but it’s not as dense as New York. So people have been drawn to Jersey City.”

At 68 stories, phase two is the tallest of what will be three towers at Journal Squared. But the development has been a distinctive part of the Jersey City skyline ever since the arrival of phase one, which delivered 538 units in 2017 and was fully leased in just 10 months.

The newest tower has only expanded the offerings that helped fuel the project’s initial success, adding some 70,000 square feet of indoor and outdoor amenity space to the complex, including a full-floor fitness center. That brings the total to nearly 100,000 square feet, all of which is available to residents of either existing building and future residents of the third building.

“It’s really the mother of the entire project,” Kushner said of the second tower.

Phase two also features pieces by local artists, while highlighting Journal Square’s legacy of culture and business. To that end, a design team led by HWKN Architects and Handel Architects has adorned the amenity spaces with items such as a vintage printing press from the Jersey Journal, the neighborhood’s namesake, along with historic photos of the area.

“It’s a new era for Journal Square, but we really wanted to give homage to the history of the place and the rich cultural background of the place,” said Marc Kushner, KRE Group’s chief design officer.

Admittedly, the pandemic was both challenging and reassuring for the team behind Journal Squared. Kaplan pointed to the challenges of renting apartments over the past year, noting that “you had people leaving the market” and contributing to a decidedly more difficult leasing environment. But rather than cutting costs for the project, he said, KRE believed that “we had to double down on our investment in the building to make it the best-in-class product.”

Renters have validated that decision during the first three months of leasing, which is being overseen by The Marketing Directors after the firm spearheaded the successful lease-up of the project’s first phase.

“We’d be lying if we said it wasn’t a challenging year, but we’ve clearly seen that people are coming back for high quality,” Jonathan Kushner said. “They’re definitely coming back for a little bit more free rent and perhaps even a little bit of a lower rent, but there’s a flight to quality in the town and we’re reaping the benefits of that.”

The response at the second tower has also reinforced another outcome of the COVID-19 crisis — the acceleration of trends that were emerging before the pandemic. That includes the demand for flexible amenity spaces that allow for both socializing and working, the latter of which has become increasingly important. KRE and its design team were conscious of that when it came to its sky lounge, which Marc Kushner said has the best view in the building and is an area “where people can sit and spend the day.”

Journal Squared also taps into renters’ appetite for multiple transportation options, starting with its location atop the second-busiest PATH station in New Jersey. But the building is also auto-friendly — thanks to its large hotel-like porte cochere — while offering abundant and easy-to-access bicycle storage.

Those options combine with the neighborhood’s walkability, which has been enriched by a landscaped pedestrian plaza known as Magnolia Landing. The space, which leads to the Journal Square transit hub, opened in 2018 as part of KRE’s project and has played host to farmers markets, seasonal activities and community events.

“Furthering the trends, we’re enabling lots of different ways of getting around,” Kaplan said, adding that it’s not just about the subway, cars or bikes. “It’s about an offering for tenants to make choices (on) however they feel most comfortable, especially in this environment.” 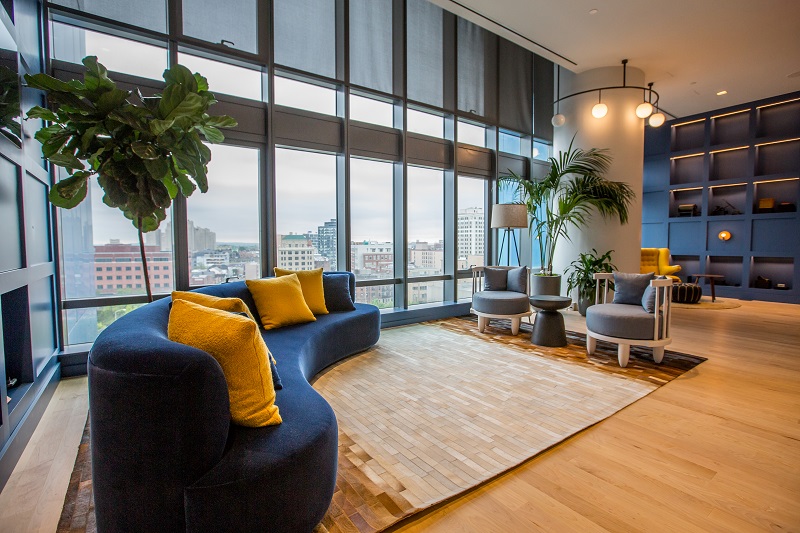 KRE and National Real Estate Advisors are now looking ahead to the third and final phase, which is fully designed and could begin as soon as this year if velocity remains strong.

“It’s just about when we as a partnership decide to go,” Jonathan Kushner said, later adding: “You’re never going to time these things exactly right. Each of these buildings from beginning to end takes years to build, so to some degree you have to take a leap of faith that, when you open, times will be good or, when you open, there will people who want to live there.”

That will be all the more likely as Journal Square continues to evolve, with new initiatives on the horizon that will enhance it as a destination. Chief among them is the $72 million restoration of the historic Loew’s Theatre, located directly east of the PATH station, under a recently announced partnership with the operators of Newark’s Prudential Center. Mayor Steven Fulop joined Devils Arena Entertainment in February to detail the project, which calls for transforming the century-old, underutilized venue into a modern, 3,300-seat facility that could draw both superstar performers and up-and-coming artists.

The project is slated for completion in early 2025, creating what Fulop says will be an anchor institution akin to the city’s colleges and universities, the Liberty Science Center and others.

“The Loew’s is going to be right there as part of that conversation,” he said. He noted that the city also plans to create a new Jersey City Museum and community center nearby, at 25 Sip Ave., at a five-story, 55,000-square-foot building that it acquired in 2018.

“The city is investing a significant amount in the arts and we do believe that it is ultimately going to be the draw that’s going to get people back to Journal Square,” Fulop said. He also expects to see new restaurants and small businesses come to the area around the Loew’s Theatre once the restoration is complete.

That doesn’t mean developers are waiting around. Other projects of varying sizes have opened in Journal Square in recent months, including 122 micro apartments at 190 Academy St. by KSNY and Strategic Properties. In mid-April, Hopkins Group Management unveiled 40 new loft apartments at a 103-year-old Elks lodge building at 275 Magnolia Ave., adjacent to the Loew’s Theatre, in the firm’s latest Journal Square project.

The neighborhood now boasts a development pipeline of increasingly ambitious projects, such as a recently announced, 902-unit apartment tower at 500 Summit Ave. by HAP Investments and a nearby 386-unit high-rise by former New York Gov. Eliot Spitzer. That’s not to mention Kushner Cos.’ One Journal Square, a massive mixed-use development that would include more than 1,700 apartments and could break ground later this year, following a multiyear delay and legal battle between the developer and the city.

“For the first time we’re seeing residential development at a large scale,” Fulop said, later adding: “Every major developer in New Jersey has been looking at properties there and has reached out to (the city planning department), so it bodes well for the future of Journal Square, with regard to what the professional development community thinks.”

Notably, the submarket has caught the eye of New York-based real estate firms that are now “coming in with two feet,” according to Eugene Paolino, a Jersey City-based attorney with Genova Burns LLC, who represents a host of developers in Journal Square and throughout the city. Many have been aggressive about entering the market, especially after observing the success of KRE Group’s first tower.

“There were developers that were waiting in the wings, thinking of the Journal Squared project as the litmus test,” said Paolino, a partner in Genova Burns’ land use and approvals and commercial real estate redevelopment groups.

Stakeholders can only hope the influx of new residents comes alongside new commercial activity. Fulop noted that demand for office space in Journal Square had been strong heading into the pandemic, while he expects to see additional interest from retailers.

KRE Group has also seen a response from commercial users, albeit in a small sample size. Journal Squared phase one featured a small retail space that attracted a café and eatery known as Wealth Kitchen. Phase two has added some 16,000 square feet of ground-floor space, which Kaplan said is now drawing attention from prospective tenants.

“We’ve seen incredible interest from everything from food providers to grocers,” he said. “People see the demand and they see the location relative to the train — and we’re just getting a lot of interest.”