Jake Pine (left), a director with L+M Development Partners, and Blake Goodman, an executive vice president with JLL, are part of the team marketing more than 50,000 square feet of office space at the mixed-use Walker House project at 540 Broad St. in Newark. – All photos by Aaron Houston for Real Estate NJ

One was the site of a sprawling department store. The other is a soaring office tower. Yet the restoration of the Hahne & Co. property in downtown Newark has been something of a blueprint for transforming the latter, the iconic New Jersey Bell building at 540 Broad St.

Namely, the Hahne’s project has shown the importance of creating a diverse environment, with luxury apartments, retailers like Whole Foods and dynamic office users such as a co-working space. L+M Development Partners is now seeking to build on that model at 540 Broad, now known as Walker House, a 21-story building about two blocks to the north.

“Similar to Hahne’s, we believe in this kind of mixed-use development,” said Jake Pine, a director with L+M, which has spearheaded both projects. “We want to combine all of the uses so that they can continue to play off each other. They need each other to thrive.”

With renters flocking to Walker House’s 264 apartments and commitments from a host of retailers, L+M is keenly focused on the third piece of its formula. The New York-based developer, alongside brokers with JLL, has stepped up efforts to market more than 50,000 square feet of available office space at the building, touting the promise of downtown Newark’s resurgence and a workplace that is like few others in New Jersey.

For one thing, Walker House will soon have retail amenities such as a brewery, a mafia movie-themed coffee shop and an indoor rock-climbing gym, which are set to occupy the property by next year.

“This is one of the only true live-work-play commercial real estate opportunities in the state,” said Blake Goodman, an executive managing director with JLL. He noted that the development team recently completed a new dedicated commercial lobby, so “this is the first time that we’ve had the opportunity to have the building complete” for prospective tenants.

That development team — which includes L+M, Prudential Financial and Goldman Sachs Urban Investment Group — announced the launch of residential leasing at Walker House in early May. They celebrated the building’s grand opening a month later, as both the market-rate and affordable units were experiencing strong demand and construction was underway on several retail spaces.

The property had already secured two new office users as of late September — Per Scolas, a nonprofit that provides free technology training for unemployed or underemployed adults, and a presidential campaign office for U.S. Sen. Cory Booker. The former opened in March to become the building’s first new tenant in any phase, occupying nearly 6,200 square feet even as construction continued.

Today, the space serves as an example of what the building has to offer to users that are considering any of its 54,000 square feet of available office space.

“Every single tour, we’re walking tenants through to give them the vision and show them what this loft-style office space looks like, because sometimes it is hard to have vision when you’re looking at raw space,” Goodman said. “But I think this really gives a good depiction of what you can create and it’s actually not all that expensive to build something like this.”

SLIDESHOW: The Offices at Walker House 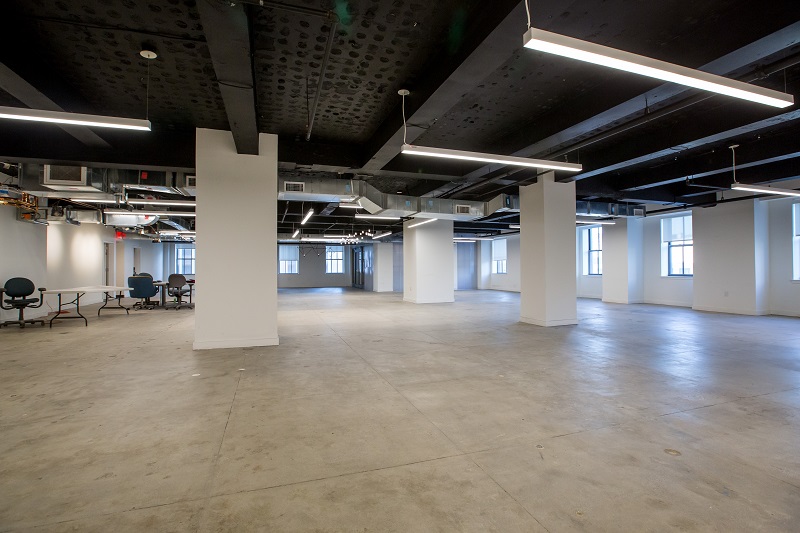 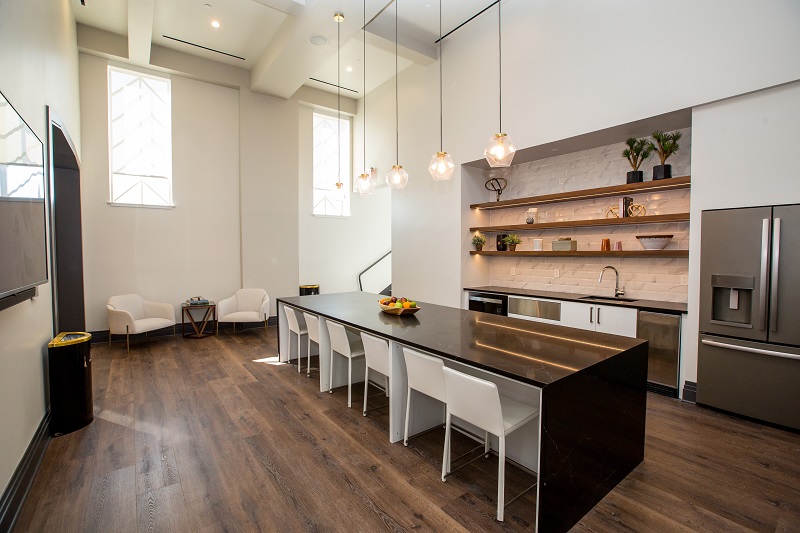 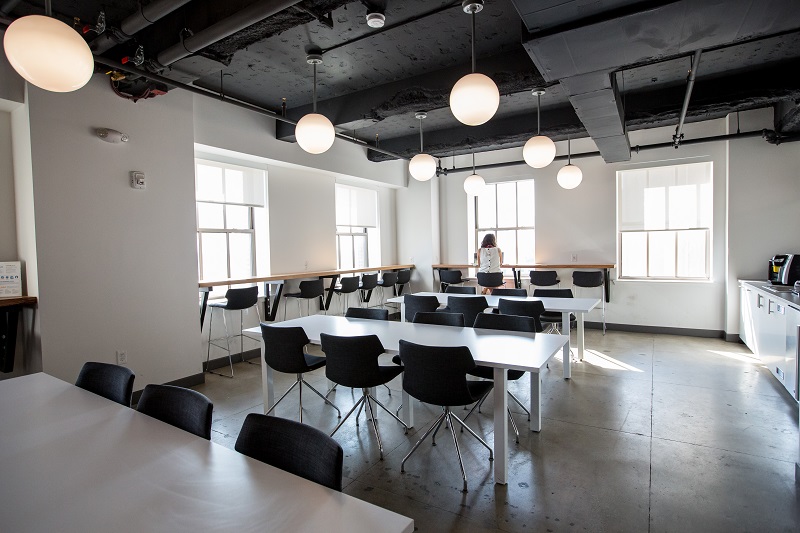 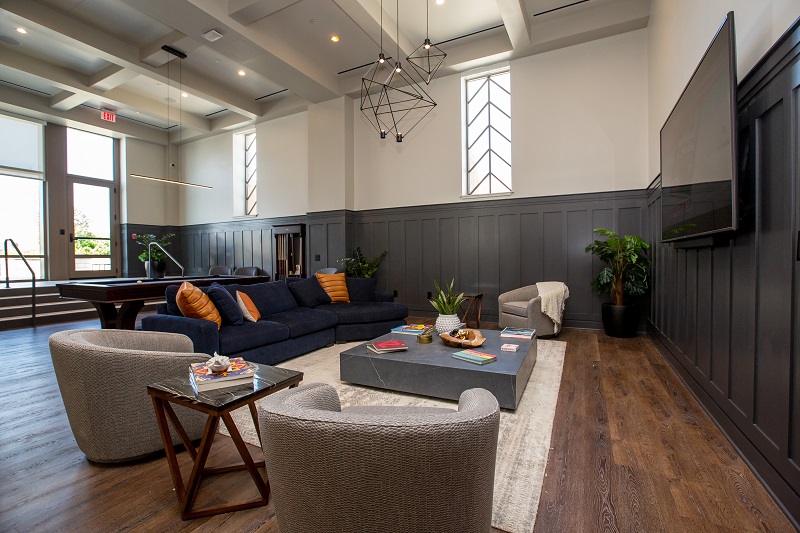 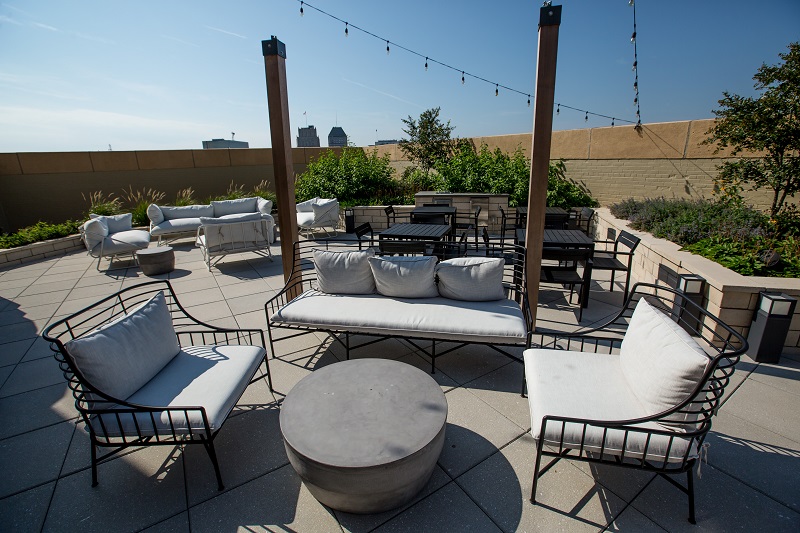 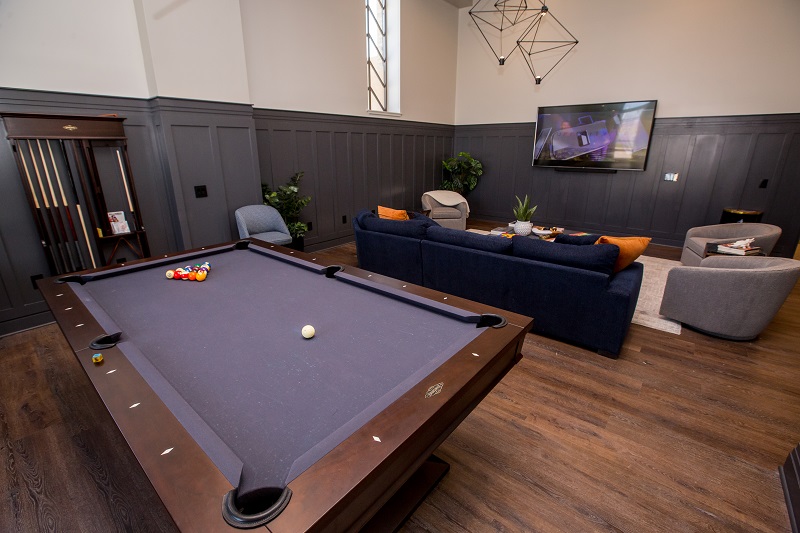 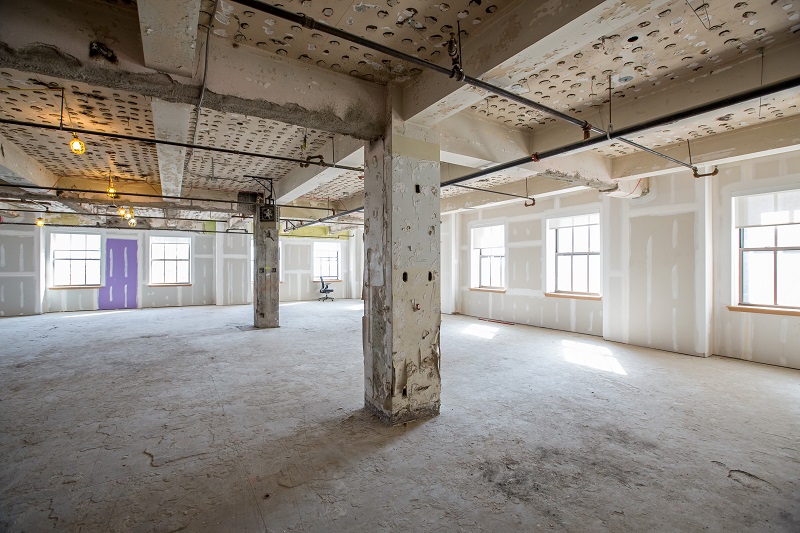 L+M Development Partners and JLL are marketing more than 50,000 square feet of available office space at Walker House, a mixed-use property at 540 Broad St. in Newark. The building also includes a recently completed resident lounge and rooftop terrace at Walker House, which are available for commercial tenants to rent. — All photos by Aaron Houston for Real Estate NJ

The developers also recently completed a resident lounge and rooftop terrace at Walker House, which are available for commercial tenants to rent, along with the new commercial lobby. The retail spaces under construction include Method Climbing, the 22,000-square-foot indoor rock climbing gym, along with Bada Bean Cawfee, a UPS store and Newark Local Beer, a 6,300-square-foot brewery.

To be sure, L+M and its partners are banking on a similar mixed-use concept that has helped revive the historic Hahne & Co. building, also on Broad Street, where it completed a similar adaptive reuse project in 2017. Like Hahne’s, Walker House also benefits from being adjacent to a public park and accessible from both Newark Penn Station and Newark Broad Street Station.

What’s more, Hahne’s has helped to showcase the emerging technology sector in Newark, Pine said, citing the success of Launch Pad, a co-working operator that leases 14,700 square feet at the complex. He added that the venue has “just been huge for us in terms of creating the environment and the vibrancy that we want in that space.”

L+M and JLL are now in discussions to bring a co-working user to Walker House, one that could draw from the likes of Newark Venture Partners, an early stage venture fund housed within Audible.com’s headquarters at 1 Washington Place.

“The hope is that we foster that progression,” Pine said. “So we’ll have co-working and shared office in the building, and then once you grow, you come to us to lease the remaining space, so we keep it organic, we keep it all in Newark and you’re bouncing from one building to another.”

Walker House also has the benefit of being part of what Goodman says is “the tech side of town,” given the industry’s growing presence on the northern end of Broad Street.

“All of the groups that I talk to that are coming out of Newark Venture Partners really take heart and pride in staying and growing within the city, which I think was the purpose of the original initiative — to grow tech within Newark — given the fiber infrastructure and everything else that’s here,” Goodman said.

“It’s been a great benefit and I think the tech community is starting to really catch on and show an interest in this side of town, relative to the Penn Station side of town.”

The Offices at Walker House are drawing interest, not only from the potential of Newark’s burgeoning tech sector, but from companies in other industries. To Goodman, that’s a reflection of the expanding tenant base in New Jersey’s largest city.

“You’re starting to see a more diverse grouping of companies and, in general, I would say the demand for more urban work environments is a lot stronger than it’s ever been, especially in New Jersey,” he said. “And with most of these large corporations that are based in northern and western New Jersey, they’re starting to rethink where they’re located because they’re focused on the next-gen population and who’s going to work at their offices.”

L+M Development Partners may have been committed to including commercial space at Walker House from the very start, but it was the building’s longtime tenant that helped it decide exactly how much to include.

As Jake Pine noted, Verizon sought to maintain a presence at what had long been a regional office. The telecom company ultimately took space on the fourth floor, which gave the development team a natural transition between the residential component and the commercial section below.

“That really set how much or little we wanted to move forward with from an office standpoint,” Pine said.