A model at The Cliffs Collection at 100 Paterson Plank Road in Jersey City — Manhattan Building Co.

A developer has added to its fast-growing footprint in Jersey City, unveiling 60 new luxury condominiums at a converted factory near the Hoboken border.

Located at 100 Paterson Plank Road, the project by Manhattan Building Co. has called for restoring and retrofitting an early 1900s boiler factory, according to a news release. The developer has now released the oversized, loft-style condos at what’s known as The Cliffs Collection, touting a focus on health and wellness.

The new units range from studios to four-bedroom layouts spanning 570 to 2,200 square feet, the firm said, with introductory prices starting from the $500,000s.

“There is simply nothing like The Cliffs Collection offered in Hudson County,” Sanford Weiss, CEO of Manhattan Building Co., said in a prepared statement. “Of course, it starts with the homes themselves where no stone has been unturned. These condominiums defy market standards with unique and oversized living spaces outfitted with designer features and finishes that pay homage to the building’s industrial past.”

The property is a half-mile from the neighborhood known as SoHo West, where Manhattan Building Co. has spurred the transformation of a historically industrial section of Jersey City. The developer since 2013 has delivered more than 750 luxury apartment at projects including Cast Iron Lofts and Soho Lofts, while several other luxury buildings are underway.

At The Cliffs Collection, the firm is offering buyers an opportunity to customize their homes before move-in with “near-immediate occupancy,” according to a news release. The five-story overlooks Hoboken atop what’s known as the Basalt Cliffs, offering 10- to 14-foot ceilings, oversized windows, exposed brick walls and high-end fixtures and appliances.

“Buyers can also purchase a home ‘as is,’ allowing for them to privately complete renovations and improvements,” said Joshua Beigel, project director for The Cliffs Collection. 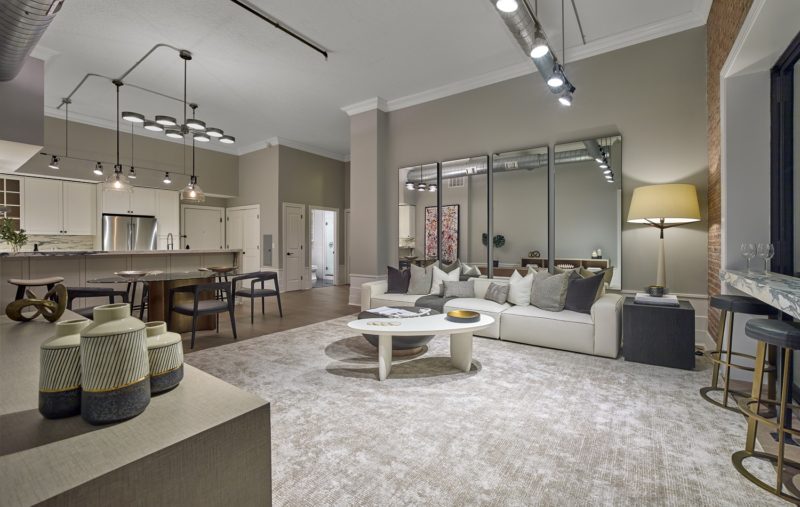 The modernization has resulted in new amenities such as a fitness center with Himalayan salt sauna, a residents’ lounge and library with fireplace and a children’s playroom. Outside, the property features a roof deck and lounge with a kitchen and grilling area and fire pits.

Manhattan Building Co. said it designed The Cliffs Collection with an eye toward so-called Blue Zone Living, an international concept emphasizing a balance of diet, good habits and social engagement to initiate healthier, happier and longer lives. To that end, residents have access to an on-site wellness center with spa services, yoga and meditation classes and wellness programming.

“Complementary shuttle service will be provided to the Hoboken PATH station from our front door, bringing the work centers and vibrant nightlife of Manhattan close to home,” Beigel added.  “We’re also just blocks from all the entertainment, dining, shopping and more that line Hoboken’s lively Washington Street and Newark Avenue retail corridor.

“The 2nd Street Light Rail Station is steps from The Cliffs Collection, providing convenient access to both downtown Jersey City and uptown Hoboken.”