A rendering of a mixed-use redevelopment project on Springfield Avenue in Newark — Courtesy: BlueSugar Corp. and GonSosa Development

A development group spearheaded by Queen Latifah is pushing ahead with a project in her native city of Newark, where it’s planning a mix of townhomes and affordable housing.

The partnership between BlueSugar Corp. and GonSosa Development is slated to break ground this summer on the 76-unit project. Located at Springfield Avenue and South 17th Street, the development calls for 20 three-family townhomes to be rented at market rate and a separate three-story building for income-eligible residents.

The group has received planning board approval for the project, which spans Newark’s west and south wards, according to a news release. The first phase will include the three townhome buildings and is slated for completion by December 2020, while the remaining building would follow a year later.

The joint venture also noted that the affordable housing property will be a mixed-use building that will include a fitness center for residents and 1,900 square feet of ground-floor commercial space, which it will lease to nonprofits serving the community. 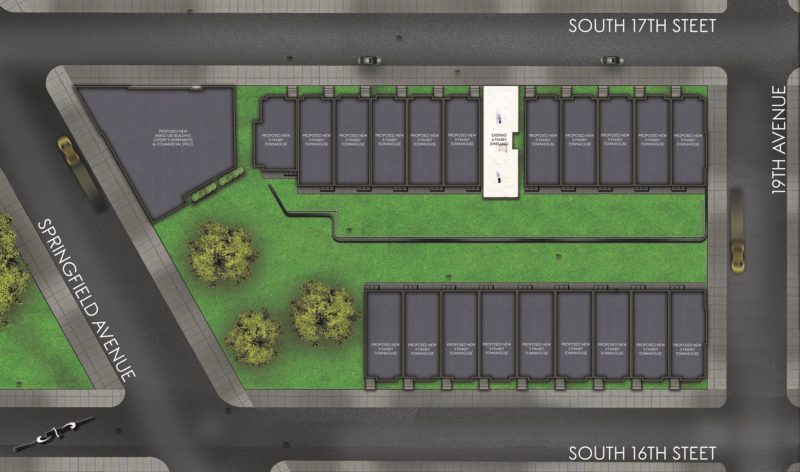 Queen Latifah, whose real name is Dana Owens, is a co-president of BlueSugar alongside Shakim Compere. In the news release, they said they founded the firm to help redevelop and revitalize neighborhoods across the country that have experienced economic downturns, beginning with the celebrity’s hometown in Essex County.

BlueSugar Vice President Tammy Hammond is spearheading the project alongside GonSosa Development, whose officers are Alberto Goncalves and Ricardo Sosa. The firm — which has helped to develop or rehabilitate more than 1,000 rental and condominium units and 1 million square feet of commercial space in the Northeast — also recently announced a new mixed-use project in Elizabeth.

In Newark, the joint venture touted the site’s proximity to the city’s downtown restaurants and cultural offerings, along with NJ Transit bus service and nearby park and recreational areas.