Procida Funding and Asset Realty are planning a $40 million project that would create 127 loft-style apartments at the site of an existing mill complex in Paterson, which would be restored and converted alongside a new ground-up building at 468 Totowa Ave. Procida Funding CEO Billy Procida was among the speakers at a ceremony on April 20. — Courtesy: Procida

A development team led by Procida Funding has unveiled plans to create nearly 130 new apartments at the site of a historic mill complex near Paterson’s Great Falls.

The Englewood-based firm and its partner, Asset Realty, say the $40 million project calls for restoring and converting an existing L-shaped building at 468 Totowa Ave., resulting in 80 rental units and amenity space within a structure that dates back to 1907. They’re also slated to add 47 homes in a new ground-up building at the rear of the property, noting that the design would reflect the site’s historic architecture.

The project team joined city officials and other stakeholders on Wednesday to detail what would be known as Great Falls Lofts. 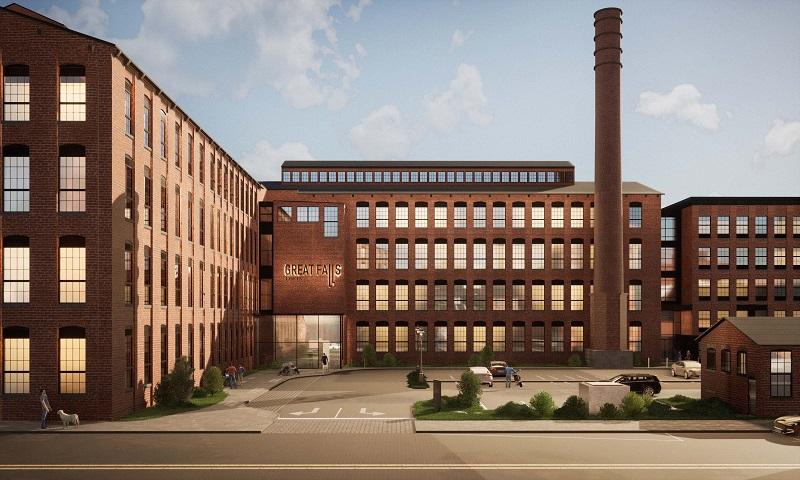 “This is an incredibly exciting time for Paterson and its residents,” Mayor Andre Sayegh said. “The restoration and repurposing of the former Miesch Manufacturing mill would help add to the neighborhood’s renaissance and points to the vibrant industrial history of our city. 468 Totowa — home to the proposed Great Falls Lofts — adds to the significance of Paterson’s industrial legacy and points to a brighter day of investment, opportunity and positive transformation.”

In announcing the plan, Procida noted that the firm has financed and overseen more than $60 million worth of development and redevelopment in Paterson over the past decade. Great Falls Lofts is the first in which it would be the developer, adding to a location that is a priority under a host of local, state and federal programs.

Procida and Asset Realty are equal partners in the venture under the recently formed 100 Mile Renard Totowa LLC.

“Paterson has improved every year over the last decade,” said Procida Funding CEO Billy Procida, who has more than three decades of experience as a builder and financier. “I just couldn’t help myself in being the developer one last time. The entire area is primed for a resurgence. Giving back to Paterson is a win-win situation. The addition of the Great Falls Lofts would revitalize the community and maintain the rich history of the First Ward. This is what our 100 Mile Fund is all about.”

Recently approved by the Paterson planning board, Great Falls Lofts would maintain much of its historically significant elements in order to promote the goals of the city’s redevelopment and master plans, according to a news release. Its project team includes Procida Construction, ENV Architects, Titan Engineering, Stonefield Engineering and Johnson and Urban, boasting extensive experience in historic adaptive reuse projects.

“Rehabbing a mill building from the early 1900s always has its challenges,” said Brian Foley, a partner at Procida Funding. “It is very important for us to maintain a historic aesthetic while offering a quality living experience for the people of Paterson.”

The developer also noted that the Great Falls Lofts site is adjacent to Hinchliffe Stadium, one of the country’s two remaining Negro League ballparks, which is being restored and expanded under a project by BAW Development and RPM Development. It’s also next to the 8.4-acre hilltop Vista Park, which is being preserved by the state, and a short walk to the iconic Great Falls National Historic Park, the site of what’s slated to be a new visitors’ center and downtown youth complex under a proposed $47 million enhancement.

Apartments at Great Falls Lofts will have high-end design and materials, while residents will have access to a fitness center, on-site storage, bicycle parking and dedicated amenity space on each floor. Procida’s plans also include renovations of two freestanding buildings on Jasper Street to create nearly 6,800 square feet of retail space, while several existing structures on the site will be demolished to improve its walkability.

In addition to preserving the history of the neighborhood, Procida said it would involve local contractors, residents, nonprofits and community groups to ensure a longer-lasting, inclusive benefit to the community. To that end, it recently added lifelong Patersonian Ashley Brito to the development team.

“ENV is thrilled to be the architect of record for the exciting repurposing of this turn-of-the-century industrial mill building into loft-style apartments,” said Hans Erdenberger, president of ENV Architects. “This renovation project would definitely serve as a catalyst for further redevelopment in this residential neighborhood located above the majestic Falls of Paterson.”