Robert Weiss had owned the site for some 20 years. But it was only recently that he could tap into the potential of a property that is steps from both a commuter train station and downtown Somerville.

The turning point came when local leaders became interested in attracting new residents to their central business district, Weiss said. Officials then moved about four years ago to rezone the parcel on Veterans Memorial Drive from commercial to residential, allowing the developer to justify the cost of remediating and redeveloping the property.

“This is something that they really wanted to see happen and they really helped with the process,” said Weiss, president of Weiss Properties. “And whenever you have a town or a borough helping a developer with the process, you know that this is something that everybody wants. So it was really their vision of bringing housing and apartments to the center of town, and I think it’s paid off tremendously.”

That was all too clear last summer when Weiss Properties opened The Cobalt, its new 117-unit high-end apartment building at the site. The four-story property has revitalized a long-vacant, formerly contaminated site just a block from Main Street — which housed a junk yard and metal fabrication facility — offering a new living option for a town that is primed to tap into the market for walkable, transit-centric destinations.

SLIDESHOW: The Cobalt in Somerville 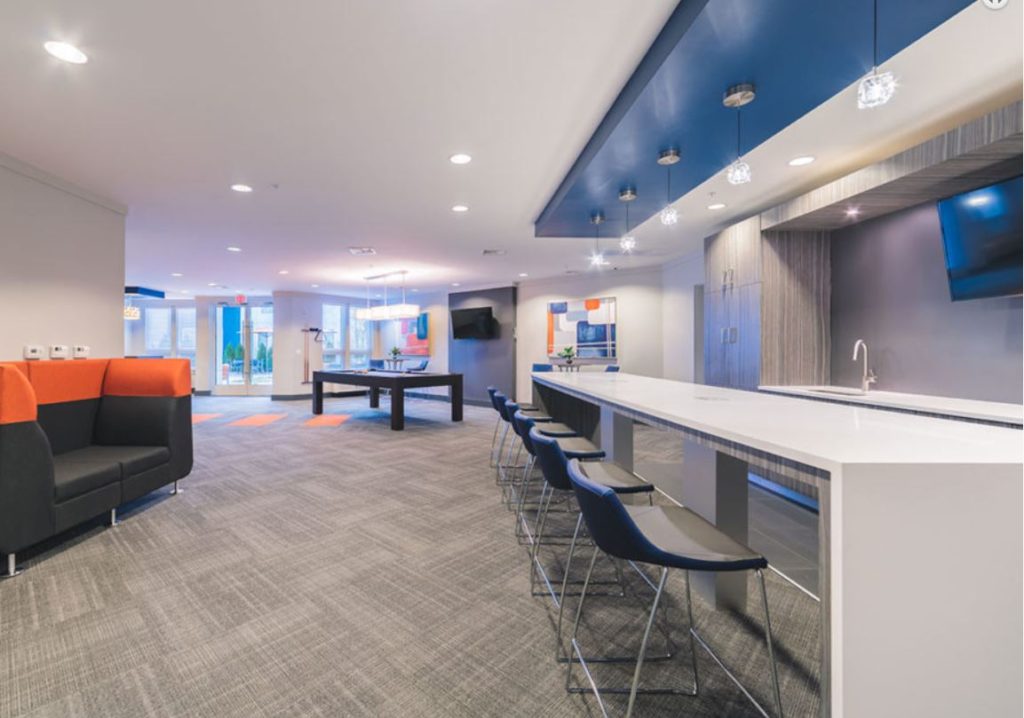 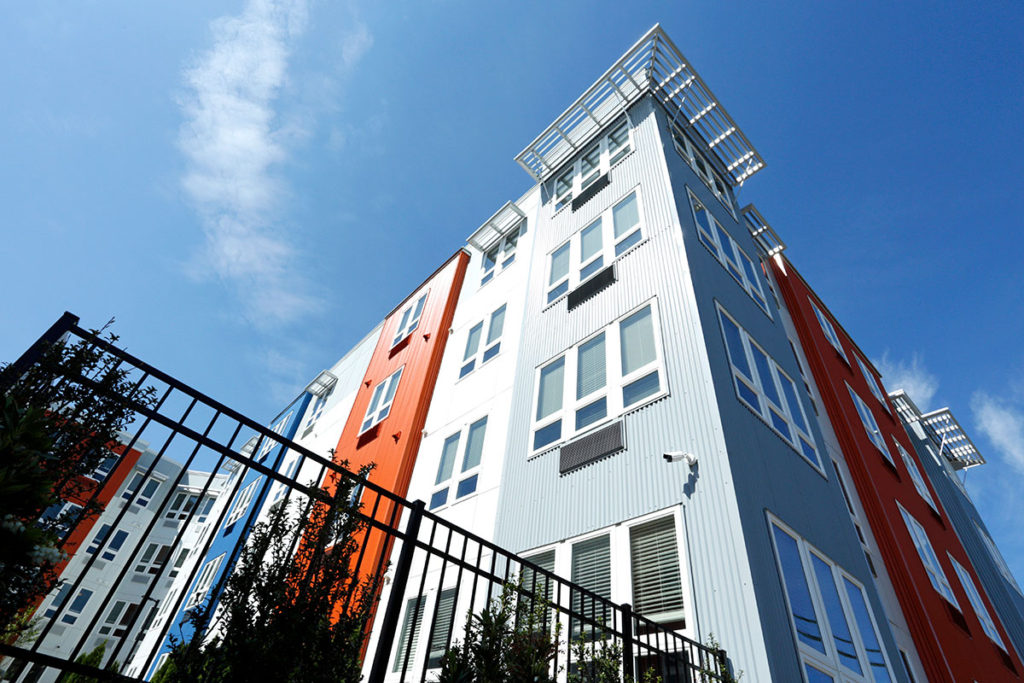 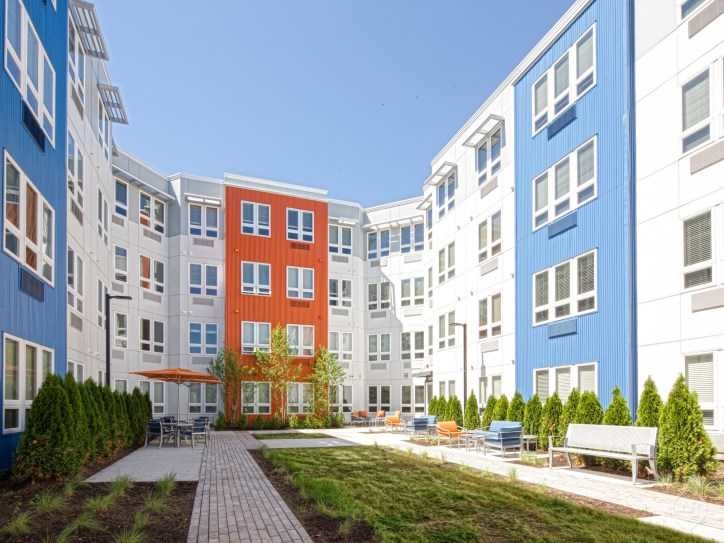 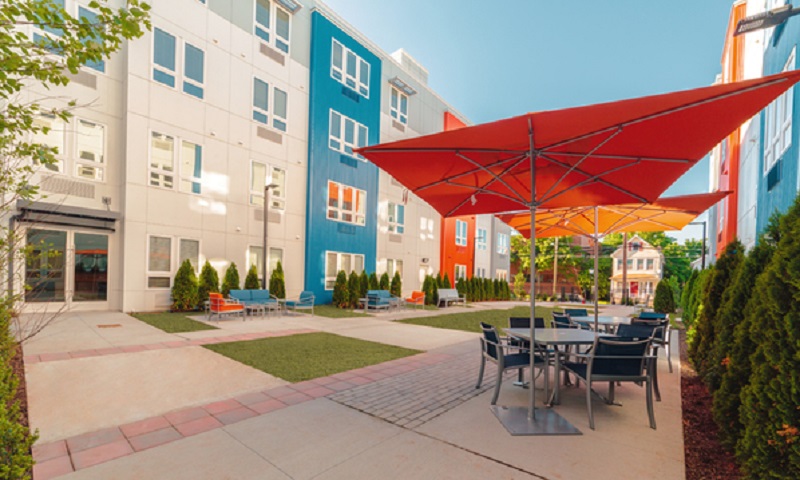 The Cobalt, which is about 65 percent leased, has seemingly checked those boxes while also embracing the surrounding environment. Project architect David Minno said it was “designed to be a little bit edgy-looking, and it’s in what I would call an edgier location of Somerville.”

That has resulted in an eye-catching, multicolored exterior with corrugated metal siding and contemporary-style windows, he said.

“We really wanted to say that this was a project not necessarily just for young people, but one that has a contemporary, vibrant edge to it on the edge of the town next to the tracks,” said Minno, principal and co-founder of Minno & Wasko. “And the interior design followed through with the color scheme.”

Located at 70 Veterans Memorial Drive East, the property borders NJ Transit’s Raritan Valley Line to the south and is about two blocks from the commuter rail station. Minno said that proximity to the tracks created the potential for noise, but the design team “turned lemons into lemonade” by building a 109-space parking deck between the building and the rail line.

The mass of the parking structure helps soften the sound from passing trains, he said, while also providing an additional amenity for renters at The Cobalt.

“It was a nice way to handle what could have been a tough edge,” Minno said.

Minno’s firm has also designed Weiss’ next project in Somerville, a 60-unit development on Davenport Street that was slated to break ground this month. It’s one of several projects in the pipeline for a borough that has also attracted builders such as Edgewood Properties, which built the town’s first luxury apartments in 2014 as part of a project on West Main Street, and Somerset Development.

Weiss, who credited former Mayor Brian Gallagher and longtime Planning Board Chairman Bernie Navatto, is especially bullish on Somerville. That’s due to the borough’s embrace of new mixed-use development, the activity from the county administration and courthouse buildings and a popular downtown that is bustling with upscale shops and restaurants.

“Every time you turn around, it’s like something new is being built or being redone or being added,” Weiss said. “So it’s a town that’s just moving forward and we feel that for more and more people, given the choice of fresh new, contemporary modern designs, it’s going to be very popular.”

County officials seem to agree. The Cobalt was one of six projects recently to receive a Land Development and Planning Award, a distinction offered by the Somerset County Board of Chosen Freeholders and the county planning board.

“Each year, awards are presented for land development and planning that exemplify superior site design, address contemporary planning issues, or exert a positive influence on the character of the county,” said Gallagher, now a county freeholder. “I congratulate all of the honorees for demonstrating the positive impact that well-designed and -planned projects can have in communities.”