HHG Development Associates is marketing 100,000 square feet of loft-style, creative office space at its Roebling Center project, which it will develop by rehabilitating an existing building along Hamilton Avenue. — Rendering by Clarke Caton Hintz/Courtesy: HHG Development

The principals at HHG Development Associates know there are always questions in an unproven market.

At Roebling Lofts, one of those unknowns was whether they could lease an apartment in Trenton for north of $2,000 a month. But it wasn’t long before they had an answer: The three highest-priced units in the rehabilitated, historic brick factory building — which rent for $2,300 each — were all quickly leased this summer once the firm was able to show them to prospective tenants.

It was a sign of things to come at the 138-unit project, which is now more than 50 percent leased.

“In my mind, it really demonstrates that there’s a market there if you can deliver exceptional architecture,” said Michael Goldstein, a principal with HHG. “That’s always been the foundation of HHG’s business, which is delivering beautiful living spaces at a fraction of what they would cost if you had them in Princeton or in some other conventional market.

“We always figured it would work in this market. And it does.”

With the positive response, the principals of HHG have set their sights on what comes next in their redevelopment of Trenton’s iconic Roebling Steel complex. That includes restoring an adjacent building that will result in 100,000 square feet of creative, industrial-style office space — which can effectively come with 10 years of free rent because of state tax credits.

The firm and brokers with JLL are now marketing the site to companies seeking built-to-suit space at an undeniable bargain, thanks to an incentive program that places a premium on projects in Trenton. And they’re touting a location that is served by both mass transit and the region’s major highways, while making a case for an up-and-coming section of the capital city.

Filling the space would be another crucial step toward readapting the Roebling factory site, which produced steel cables for the Brooklyn, George Washington and Golden Gate bridges, among many others. Built by the engineer John A. Roebling, the complex dates back to the late 1840s and is made up of stout and architecturally distinctive brick buildings, with high ceilings and airy interiors that will appeal to both residents and office tenants.

HHG is honoring that history at Roebling Lofts, with floorplans featuring names such as the GWB and the Williamsburg. Since preleasing began in February, Goldstein said most of the absorption to date has come from millennials, as expected, but that there is also demand from baby boomers and Generation Xers.

He also pointed to an encouraging mix of ethnicities and professional backgrounds.

“It’s not just one (demographic),” said Goldstein, a former technology entrepreneur who moved to the city in 2003. “And it’s kind of fun: It’s a very diverse mix — you know Trenton is a very welcoming community, anyway, and it encourages diversity.”

Renters at the building are no doubt attracted to or comfortable with an area that Goldstein describes as still “a little scruffy.” He pointed to a handful of vacant homes along Clark Street, but said he believes the area to be rather stable for a transitional neighborhood. The street also includes houses that are occupied and well-maintained, along with an industrial business that anchors the block opposite the Roebling complex.

Goldstein added that the property sits on the edge of the city’s Chambersburg section, which he said has the highest occupancy rate and lowest abandonment rate of any of Trenton’s inner-city neighborhoods. He noted that two shops on South Clinton Street were gutted by fire in recent years, but said the return of those businesses will be a sign of the area’s vitality.

“In unhealthy urban neighborhoods, if something burns down, it’s gone forever until you tear it down,” Goldstein said. “Well, those two shops are being rebuilt. So it’s really a happening place and I think our residents are appreciating that.”

That’s not to mention the successful Roebling Market retail plaza just south of the HHG property, which was an adaptive reuse of another portion of the former complex and is home to a supermarket, a bank, a dry cleaner and other essential services.

The HHG team believes those amenities and the transportation access are all strong draws for not only residents, but commercial tenants. The site includes a stop on NJ Transit’s River Line light rail system and is about a half-mile from the Trenton Transit Center. It also sits along Route 129 and is just a few minutes from highways such as Route 1 and Interstate 295.

“It works both ways,” said David Henderson, also a principal with HHG. “For companies that are looking to attract millennials that don’t want to work out on a highway, we’ve got the city. But for the companies with some workers who also don’t want to be in a city, you can actually show up here like you would at Princeton Junction.”

At a structure known as Building 114, the firm has developed plans to rehabilitate the space and take advantage of its 18- to 24-foot ceiling heights, large windows and expansive skylights. Its principals envision two levels of workspace that will appeal to creative and forward-thinking companies, including a mezzanine that overlooks the main floor. 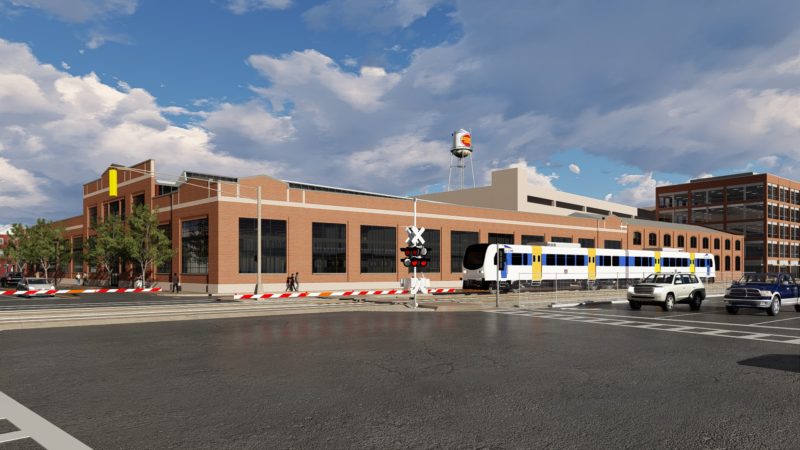 A rendering of a proposed 100,000-square-foot office building at Trenton’s former Roebling Steel complex, as seen from Route 129 and Hamilton Ave.And their pitch to office users is bolstered by the powerful Grow New Jersey tax credit program. With the city’s designation as a Garden State Growth Zone — one of only five in the state — companies that bring jobs to Trenton are eligible for significant bonuses in the size of the incentive they can earn.

And while there are several variables to be considered, the bottom line is that a tenant can earn a tax credit large enough to offset its rent for an entire decade.

That formula has attracted several prospects since HHG began marketing the space earlier this year, including a company that is currently based in Pennsylvania. According to Goldstein, one group of executives “fell in love with the building” as well as the master plan and the neighborhood, but ultimately decided against moving there because of concerns over where its existing workforce lived and whether they’d be able to handle the change in commute.

Still, HHG won’t lose sight of the substantial positive that came from the experience.

“We didn’t get that (deal),” Goldstein said. “But the thing that was great about it was all of the concerns about the space, the economics of the deal, the location in terms of the neighborhood — all of those things kind of went away once they got here and really understood what was here.”

The developers are confident about the prospects of attracting office users, especially since they can subdivide the space. They’re also encouraged by the early response at Roebling Lofts, given the need to stabilize the building and establish clear market rents for the new apartments.

All that will allow HHG to move ahead with the other phases of Roebling Center, which will ultimately include an additional 70,000 square feet of office space, another 62 apartments, retailers, restaurants and parking for some 900 cars.

“If you’re opening a restaurant here, you’re going to want to know that you’ve got a breakfast, lunch and dinner business, ideally,” Goldstein said. “And you will once all the components are here.” 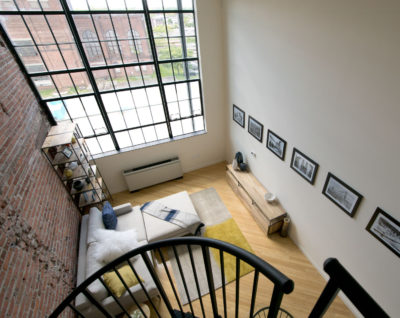 Welcome to the neighborhood

Michael Goldstein has seen Trenton-area locals lament the loss of the Italian restaurants that were once a hallmark of Chambersburg. But he says that nostalgia only tells half the story.

“What the narrative hasn’t caught up with is the fact that over the last, say, six or seven years, just about every one of those restaurants that had closed down has reopened,” Goldstein said. “And it’s reopened as a Guatemalan, Mexican or other Central American restaurant serving the people in this area. He believes there is a parallel to what happened decades ago: “Those Italian restaurants didn’t grow up to serve people driving in from Princeton. They happened because there were Italians living here and they were opening up for the Italians. It’s the same dynamic now. And the restaurants are inexpensive, they’re authentic and the food is all freshly made.”

Goldstein and his colleagues are banking on such a dynamic as a means to attracting millennials and other explorer types who may be drawn to a changing neighborhood. They see it as one of the main selling points in attracting both residents and companies that are looking to provide an engaging work environment in order to compete for talent.

“In a way, you’re catching it kind of at its creation stage and they’re a lot more interesting,” David Henderson said. “It’s an exciting time because it’s that early time when the young discoverers want to go explore.”