Two of the candidates in this year’s gubernatorial election would look to scale back or reconfigure the state’s development and business incentives, while three others appear ready to continue the existing programs as a way to extend the growth of New Jersey’s economy.

The future of the incentive programs, which many see as a key driver in the state’s commercial real estate sector, was a recurring topic last week at forum held by NAIOP New Jersey. The trade association hosted the leading Republicans and Democrats who have entered the race to succeed Gov. Chris Christie, giving the candidates a platform to discuss business issues before a room filled with developers and industry professionals.

Lt. Gov. Kim Guadagno, who has become the state’s top economic development official since taking office in 2008, said “we have to keep up what we’re doing” when it comes to business growth and the use of incentives. For instance, she touted the role of the tax credits in attracting J.P. Morgan Chase & Co. and more than 2,100 jobs from Manhattan to Jersey City in 2015.

“Keep doing what we’re doing, be responsive and do those tax credits,” Guadagno told a crowd of about 200. “Now, can we fight about how rich those tax credits are? Yes, I think we should. And I think the (Economic Development Authority) is now having that conversation.”

She also acknowledged that “perhaps Grow New Jersey is a bit too rich” and that it’s important for the state to reconsider where it directs those incentives. After using the tax breaks to encourage major investments in Newark early in the Christie administration, the state in recent years has been intensely focused on Camden.

But now that major companies such as Subaru of America and American Water Works have made commitments in Camden, Guadagno said it’s time to pivot once again.

“(Atlantic City) is the next place for growth,” she said. “So we do need the credits. We need to build in areas that need to be built out. We need to be scientific about it.”

Her platform also called for auditing the state’s financial performance, improving customer service and cutting taxes for rank-and-file employees. She also called for continuing the Partnership for Action, a coalition of public agencies and the private sector established in 2008 aimed at promoting business growth in the state.

Assemblyman John Wisniewski, who is seeking the Democratic nomination, outlined an agenda that includes adequately funding education, creating a cabinet-level position dedicated to expanding affordable housing and reforming the state’s municipal land use process. And as chair of the Assembly transportation committee, he stressed the importance of finding a fully dedicated funding source for the state’s Transportation Trust Fund.

On incentives, Wisniewski said he would seek “a top-to-bottom re-evaluation of those incentives.” He said New Jersey was “wasting money” with the programs when you look at the amount of the tax credits that are awarded in return for the jobs created and income produced.

“When we’re spending money to entice people to build a structure so that we can bring jobs into New Jersey, and find out that everybody who is coming to work at that new structure doesn’t live in New Jersey, there’s something wrong with our incentive programs,” Wisniewski said. “So we need to do better.

State Sen. Raymond Lesniak, a Democrat with nearly 40 years in the state Legislature, identified environmental protection, job creation and cutting government waste as three pillars of his campaign. Incentive programs serve a critical role in job creation, he said, pointing to his sponsorship of the laws that created the state’s most prominent tax credit and tax increment financing programs going back more than a decade.

Those include incentives from the Urban Transit Hub tax credit to the Economic Redevelopment and Growth program to the Grow New Jersey subsidy. Lesniak noted that he has sponsored such legislation under both Democrat and Republican governors.

“There’ve been so many different changes in it and all different names, but they’re all the same, and what they allow is for New Jersey to be competitive with every other state in the nation that also offers tax incentives,” said Lesniak, a veteran Union County politician, later adding: “Without them, the state would be in terrible economic shape, and I’m proud of it.

“And to say that these are tax giveaways is not only wrong — it’s bad math: 80 percent of something is more than 100 percent of zero.”

Friday’s symposium featured three Democrats and two Republicans. Assemblyman Jack Ciattarelli, a Somerset County Republican, offered the most detailed and wide-ranging platform of any of the candidates, covering everything from redistributing school funding to phasing out the corporate business tax to not taxing the sale of a family-owned business.

He voiced support for state programs such as the Economic Redevelopment and Growth grant, while also calling payment in lieu of taxes agreements, or PILOTS, “a phenomenal tool for encouraging economic development.” But Ciattarelli said he would look to tweak the state’s PILOT law if elected governor.

“We are not going to allow towns that are primarily dependent on state to fund their schools to do PILOTs and then keep all of the money for themselves,” Ciattarelli said. “They are actually perpetuating their dependency on the state aid. In any and all forms, no government aid is ever meant to be a subsidy in perpetuity.”

Former U.S. Ambassador to Germany Phil Murphy, the Democratic frontrunner, closed out the annual forum with a platform that mixed in both social and economic policy. On the latter, he called for reigniting the STEM (science, technology, math and engineering) economy and the infrastructure economy, two sectors “that we used to own, that we used to have the corner on, and we’ve lost the edge on each.” 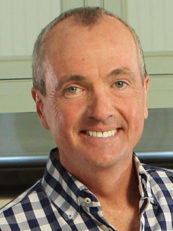 Asked about incentives, Murphy said, “I believe incentives have an absolute place, without question.” He pointed to his criticism of the state government allowing the state’s Urban Enterprise Zones to expire earlier this year. But as for more high-profile development and business incentives, he said he would “want to make sure they’re as much of a precision weapon as possible.”

“I think, historically, we’ve used sort of blunt instruments as it relates to incenting development and incenting economic activity,” Murphy said. “I believe we can be much more precise.”

For instance, he said, “(if) we believe that a STEM economy is ours to recapture like the way it used to be, what are the specific steps you can take that attract that sort of tech community into the state?” He added that incentives should be used with other programs and a more holistic effort to promote everything New Jersey has to offer.

“I think incentives have a role,” Murphy said. “I also believe that the broader set of attributes of this state are too infrequently sold.”