Bart Blatstein, the owner of the Showboat Atlantic City, is pitching a new $3 billion plan that would bring 10,000 residential units, 400,000 square feet of commercial space and vast stretches of open space to the long-vacant Bader Field site in the city.

The Philadelphia-based developer, CEO of Tower Investments Inc., announced Monday that he would partner with Post Brothers on a 140-acre project that would transform the last large parcel of undeveloped land in the resort town. Known as Casa Mar, the development would embrace the water, drawing inspiration from the canals of Venice and Amsterdam while essentially building a new neighborhood from scratch at the former airport site just off Route 4.

City and state officials have not formally vetted the project, while The Press of Atlantic City noted that Bader Field is the subject of another proposal unveiled earlier this year.

“This is a once-in-a-lifetime transformational opportunity for Atlantic City and together Tower and Post will make this happen,” Blatstein said. “The development is a key part of the renaissance of Atlantic City and the highlight of my career. It’s an honor to partner with my dear friends and fellow developers, Matthew and Michael Pestronk of Post Brothers. Our two companies have created billions of dollars of development over the years and currently have joint ventured over a billion dollars in residential development in Philadelphia.”

In a news conference Monday, the developers said Casa Mar would be built in five phases over 12 years, creating more than 44,000 construction jobs and 8,000 permanent jobs that would include the training and employment of a large local workforce. Aside from 10,000 new homes, plans call for 400,000 square feet of office and retail space and 20 acres of publicly accessible trails, parks and amenities.

“We are excited to partner with Tower in developing Casa Mar, which will change the paradigm for this city,” said Michael Pestronk, CEO of Post Brothers. “Together we will develop an epic waterfront community that will set a new standard for living not only in Atlantic City, but in the entire U.S.”

Blatstein unveiled the proposal at the site of the $100 million dollar ISLAND Waterpark, an indoor facility scheduled to open in 2023 that is currently under construction next to the Showboat hotel. His firm purchased the distinctive boardwalk property in 2015 after it became one of several failed, shuttered gaming halls in Atlantic City and has since expanded and revitalized it with projects such as the 103,000-square-foot waterpark. 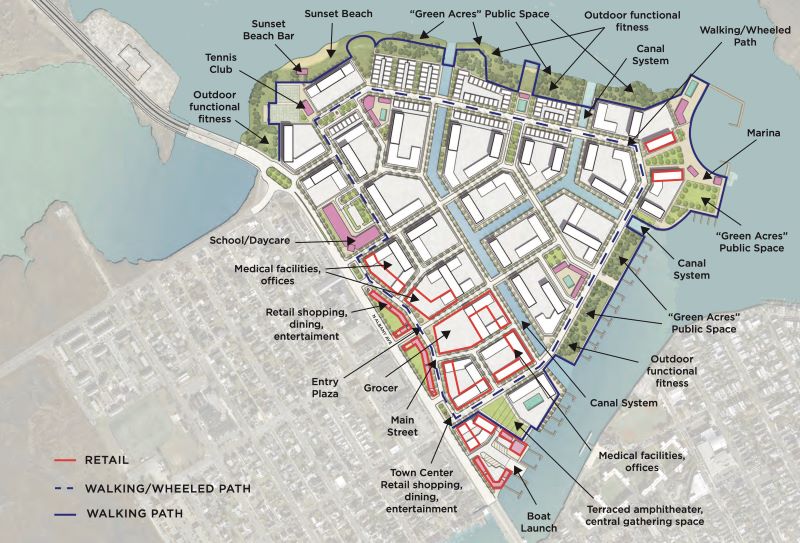 “Atlantic City is the greatest opportunity in America today,” Blatstein said. “Governor Phil Murphy and Lieutenant Governor Sheila Oliver are inspiring with their enlightened leadership and also their love and passion for Atlantic City’s future. Our confidence in their leadership propelled this plan.”

He added: “We look forward to an open and transparent process. If approved, we pledge to create in Atlantic City the most exceptional waterfront community in the country.”