A software firm has opened its new office at the acclaimed Bell Works campus in Holmdel, where it has taken 25,000 square feet despite having a fully remote workforce.

CentralReach, which provides electronic medical record software and services for the behavioral health field, has said the space would serve as a hub for in-person meetings and collaboration. The business signed a lease earlier this year to relocate from Matawan, with plans to maintain its remote-first work policy for its team of nearly 400, while offering a highly flexible, technology-rich space to promote face-to-face interaction and communication with those off-site.

The company joined Inspired by Somerset Development, the owner of Bell Works and the firm behind the transformation of the 2 million-square-foot former Bell Labs property on Crawfords Corner Road, for a Nov. 17 ribbon-cutting ceremony at its new space. 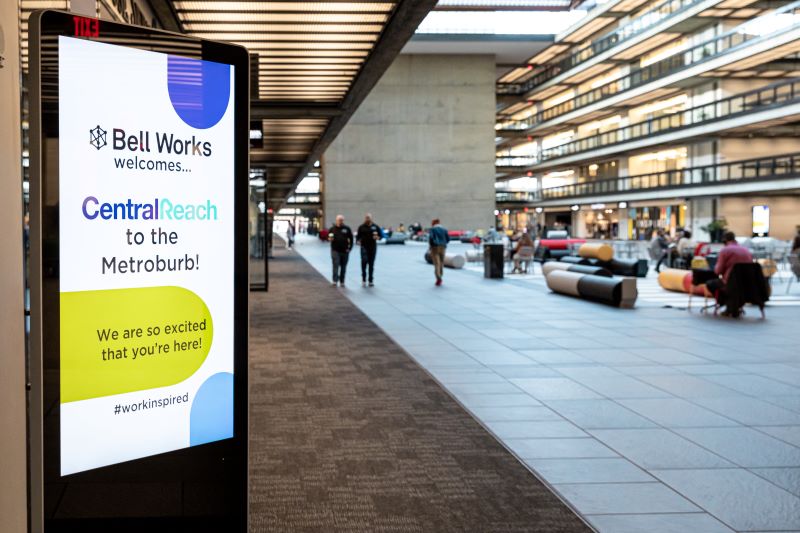 “Our company has continued to grow at an impressive rate over the last few years, despite the challenges of being forced to suddenly adopt a fully remote work model,” CentralReach CEO Chris Sullens said earlier this year. “While we’re proud of our sustained growth over the years, we also came to recognize the importance of a physical space that could facilitate collaboration between all our employees, regardless of where they are working. We immediately recognized that Bell Works was the right setting to turn that vision to reality, and we are incredibly excited to begin a new era of expansion at the metroburb.”

CentralReach built the new office in tandem with Inspired, G3 Architects and Bell Works Creative Director Paola Zamudio and her team at npz studio +, seeking to create a forward-looking workspace. Plans called for an open and highly configurable floorplan, with roughly half of the space dedicated to collaborative work, while meeting rooms and other areas will be outfitted with televisions and other equipment to facilitate seamless communication between employees present in the office and those working remotely.