George Jacobs, president of Jacobs Enterprises, welcomed city officials and other executives on Friday as the firm unveiled a new 25,000-square-foot supermarket in Elizabeth.

A new 25,000-square-foot supermarket has opened its doors in what had been a food desert in a dense section of Elizabeth, anchoring a $17 million redevelopment project that relied on a medley of private and public funding sources.

Executives with Jacobs Enterprises, the lead developer, joined partners and public officials on Friday to mark the debut of the new IGA Supermarkets Plus. In doing so, they celebrated the completion of a modern, vibrant full-service store that will allow neighborhood residents to shop for their groceries without crossing Route 1&9.

“One of the gratifying things in my business is building something like this,” said George Jacobs, president of Clifton-based Jacobs Enterprises, who has often spoken of the “very complicated capital stack” that it took to get the project started.

Located at the corner of East Grand and Division streets, the supermarket is the anchor of a 55,000-square-foot shopping center known as Pointe Grande Plaza. Jacobs said the overall project is about 85 percent leased, with other tenants including Dollar General, Sonic Suds, Cricket Wireless.

Those operators are expected to open within the next 60 days.

“The other tenants want a supermarket anchor, but they look at the demographics,” said Jacobs, whose firm was brought into the project by Robert Volosin of Supermarket Consulting Group. “This is an underserved market. There are 50,000 people here on this side of Route 1 and this is the only shopping center.” 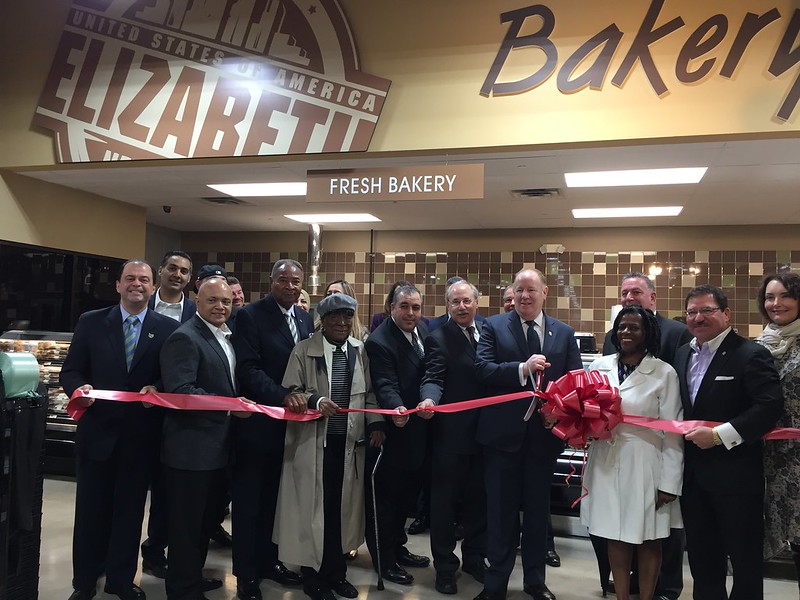 Friday’s grand opening was the culmination of an effort that goes back more than a decade. The property is the former site an NJ Transit bus maintenance facility that had been acquired by the city and remediated at a cost of about $2 million.

The site became targeted for a new retail development in a section of Elizabeth that had been starving for a supermarket. But it took a collection of funding sources, including a $4.8 million reimbursement grant under the state’s Economic Redevelopment and Growth program and other loans and grants from the city and state, plus developer equity and a nearly $9 million loan from Valley National Bank.

The project was also the first recipient of a loan under the Economic Development Authority’s new Real Estate Impact Fund Program, which helped close another gap with $1.27 million in financing.

Speakers at Friday’s ceremony also cited the political buy-in that it took to get the project approved, pointing to a long list of council members and city officials who were involved. And Elizabeth Mayor Chris Bollwage said the momentum from the development is now being seen in other new supermarket projects in the city.

“We have fulfilled the mission of creating supermarket availability on this side of Route 1,” Bollwage said, “and I want to thank the whole team that put this together as well as all of the members on my staff.”

The project was designed by Jarmel Kizel Architects and Engineers, while River Drive Construction served as general contractor.

Dozens turned out for the grand opening, despite a fierce storm that dropped more than three inches of rain on some parts of the state. Maureen Hassett, an EDA senior vice president, thanked those in attendance “for coming out on a day that is not for the faint of heart.”

“Much like this project was not for the faint of heart,” said Hassett, who oversees governance, communications and strategic initiatives for the authority. “So we’re here from the Economic Development Authority speaking as a partner in what was a tremendous effort that took a number of years to come together with a lot of partners.”