After being turned down by seven other lenders, it was late last year when the developer of a 148-bed assisted living facility in East Windsor finally found the cash infusion it needed.

It was the kind of opportunity that Kennedy Funding Financial was able to seize, even if other lenders could not. The Englewood Cliffs-based firm provided a $1.7 million loan that the borrower, EW Acquisition LLC, could use for working capital and infrastructure upgrades around the site of the planned 89,000-square-foot project.

“Banks typically don’t touch those types of things, especially today,” CEO and President Kevin Wolfer said, ticking off a list that included everything from land deals to buildings in tertiary markets.

But it was the type of deal that has helped Kennedy Funding build a niche in real estate lending over more than three decades. The company, which has closed nearly $3 billion worth of loans since 1985, provides bridge and land loans in deals that banks routinely avoid — often closing the transaction in a matter of days or weeks.

That business has taken the firm to some rather memorable places, such as the palatial Manhattan townhome of Penthouse magazine founder Bob Guccione, which served as collateral for a $14.5 million loan that Kennedy Funding provided. Not to mention the 240-acre Mississippi ranch once owned by Elvis Presley, where it provided a buyer with a $2.3 million loan in 2014.

But it all fits a niche of stepping in when banks won’t, whether it’s because of questions about the borrower or because the borrower simply needs a faster option.

“We really focus on the value of the real estate,” Wolfer said. “We get a quick appraisal done to tell us what it’s really worth in today’s dollars, we make sure it’s environmentally clean and make sure we have a survey that’s acceptableto the title company. So there’s a huge difference in timing between ourselves and a conventional bank.”

That service does come with a cost: The firm and other so-called hard money lenders charge higher fees and interest rates than traditional financing sources — with rates starting around 9 percent for Kennedy Funding. And the willingness to offer fast, flexible loans leads to higher default rates than with banks. But Wolfer said the 12-person firm goes a long way to minimize those pitfalls by requiring virtually every piece of documentation that banks ask for.

The model has worked for the better part of 30 years, even if Kennedy Funding has had to adapt once or twice during that time. The Great Recession created a slowdown in loans and a higher rate of default that left it with dozens of foreclosed and devalued properties. That meant the firm was spending most of its time on being a landlord or property owner — which Wolfer said is not part of its core expertise — and that it had to rethink how it funds its lending program.

But Kennedy Funding has cleared those hurdles and has gotten back to doing what it does best: filling a void left by traditional lenders, typically for loans between $1 million and $50 million. And that void is perhaps bigger than ever before, as banks grapple with stricter regulations and oversight in the wake of the recession.

To talk about it all, Wolfer sat down recently with Real Estate NJ. Below are excerpts from the interview.

RENJ: One of your key selling points is your ability to close much more quickly than a traditional bank. How are you able to do that?

KEVIN WOLFER: It’s because we don’t have the red tape, because we have an open door policy at our office, where one of our loan officers has someone on the phone at 1 o’clock, runs in and says, ‘The guy’s got to close in a week because his bank fell through.’ We set up the call 15 minutes later and we ask for all of the documents later that evening.

We reach out to three different appraisal sources and they will drop what they’re doing to do our appraisals within a week if we need them to do it that quickly. We pay a littlebit extra for it, but it is part of the deal. We have attorneys who are availableto work day and night to get deals done, and we don’t have to report to anybody else. So, because of that — not having the red tape and not having the hierarchy within a bank — it enables us to be ableto go start to finish lightning-fast.

RENJ: You’ve closed some deals in a matter of days, but is that the typical turnaround time?

KW: If they’re starting from today … more often than not, it takes three to four weeks, even though we’re willing to turn things around very quickly. We’ll close within three days of our attorneys’ and our receipt of the survey, title, environmental, judgment lien searches, corporate documents, opinion letters and the remaining checklist items. Once they’re all in place and satisfactory, we’ll close right away, and if they’re ableto do that all within a week, we can close three days thereafter.

RENJ: Despite all of the safeguards, we know that not every loan works out. How often do they go into default?

KW: Twenty percent of loans go into default. That does not necessarily mean we complete a foreclosure 20 percent of the time. In fact, for half of the 20 percent, the borrower ends up, either prior to a foreclosure sale or during the foreclosure action, bringing the loan current or paying us off.

It’s typically around 10 or 12 percent of the actual loans we originate that we actually have a foreclosure sale that goes all the way to the end.

RENJ: That may be one contributor to the fact that this is a niche business that not everybody understands. What are the misconceptions that you encounter?

KW: One misconception would be that, just because we’re considered bridge-type or hard money-type lenders, we’re not going to do the proper due diligence to ensure that we have a valid first lien, title insurance survey and that the value of the property is there. We’re going to do that. We ask the borrowers to be honest with us from day one.

RENJ: But when you do deal with defaults and foreclosures, that must have been exacerbated by the financial collapse. How did that affect your business?

KW: (We became a landlord) in 2010, ’11 and ’12, where we did take back nearly 50 properties and major projects throughout the country because there were no buyers at the time. Typically from the ’80s, ’90s and all the way through 2008, we never owned more than four properties at any time. Normally it was one or two properties, because if we were lending $5 million on a $9 million or $10 million property, we’d end up selling it for $7 million or $8 million or $9 million a month after the foreclosure saleand we’d move on. But in 2009, not only were there very few buyers who had liquidity, but if a buyer wanted to buy a $10 million property from us, first of all, the property wasn’t worth $10 million anymore. … It may have only been worth $5 million. And even if they offered $5 million, they could only come up with a million and they couldn’t get any bank to give them $4 million. So everything froze for a few years.

So we constantly had to pay taxes and insurance and maintain — and we’re not very good at that, we fully acknowledge it. We’re very good at monitoring the taxes and insurance, but we’re not very good at running (a property). We ran a high-end hotel in upstate New York that we subsequently sold less than two years ago for $12.8 million. It was an $8.9 million loan we had made back in 2007 or ’08. The borrower ended up defaulting and foreclosing throughout 2010 and ’11, and we had to carry it for several years. We, fortunately, ended up selling it and receiving back all of the principal, but we did not receive back all of our interest because we had to carry it for so many years, so that offset the gains of the sale.

In 2009, we were making loans, but 90 percent of our time, to be honest with you, was spent focusing on these assets nonstop.

RENJ: But it sounds like you’ve moved past that and have gotten back to your main business.

KW: Fortunately, we were able to rid ourselves of those 50 assets. We actually have about three remaining, but they’re very minor, so we’re very happy with that and we’re ableto move forward and focus on originating loans.

It was more than 10 years ago when Kennedy Funding closed one of its most memorable deals. The Blue Ridge Group, a North Carolina homebuilder seeking a $980,000 loan, had been turned down 44 times by other institutions before finding a match with the direct private lender. 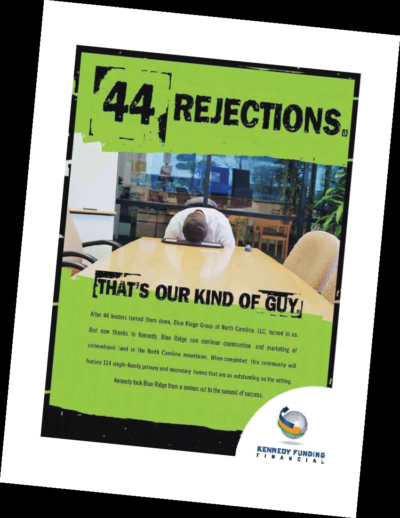 Kennedy may have seen the potential of that project, but the firm is wise to be selective with every loan it considers. Wolfer said it receives anywhere from 50 to 100 loans daily, half of which, “right off the bat, have nothing to do with our business.”

The firm then eliminates others queries because the amounts are too low or the borrowers are seeking terms that don’t match up with Kennedy’s business model, he said.

“Because of our niche and what we stick with, 90 percent of the deals don’t fit our guidelines, or the borrower is not interested in our guidelines, so they fall apart,” Wolfer said. “Of that 10 percent, we end up having a dozen conference calls a day.”

By the time the firm’s principals or attorneys go through their requirements, those dozen or so conference calls ultimately result in one or two letters of interest, he said. From there, Kennedy moves into its loan commitment and its due diligence.

“It is a big funneling process,” Wolfser said. “And then it results in a few loan closings, hopefully, each month.”

The suburbs need to adapt: A roadmap for towns to reinvent themselves