The Garibaldi Group has taken the wraps off a new co-working and conference space at its Chatham headquarters, seeking to attract startups and entrepreneurs as part of a larger effort within the borough and the Morris County business community.

The real estate services firm opened the space, known as The Station, during an event last week at its longtime home at 14 Fairmount Ave. With their sights trained on innovative businesses and their workforce, company leaders and public officials hailed the facility as a step toward modernizing the suburban commercial real estate market.

“We hope to be an epicenter and catalyst for the future downtown of Chatham,” said Jeffrey Garibaldi Jr., director of support services for The Garibaldi Group.

The space, which is located next to the town’s train station, is part of the firm’s newly renovated headquarters building in downtown Chatham. The Station features seven private team suites ranging from 100 to 400 square feet, Garibaldi said, along with reserved desks, hot desks and a fully furnished conference room.

It will also double as an event venue to accommodate networking groups, panel discussions and company parties, along with its own regular programming.

In describing the inspiration for The Station, Garibaldi said the firm is drawing on its experience at the landmark Bell Works project in Holmdel. The Garibaldi Group has served as the office leasing team for the 2 million-square-foot complex, working on behalf of Somerset Development in its effort to reposition the historic Bell Labs complex.

Garibaldi noted that Ralph Zucker, Somerset’s president, has staked the project on the belief that the younger, modern workforce will return from the cities if the suburbs can provide “a diverse array of experiences and — more important than anything — real and authentic experiences.” He believes The Station and the other business in downtown Chatham can meet that need, allowing the borough to resonate with the tech and innovation sector.

“We want to invite people who have unique experiences and passions to share, so that every time you walk in here it’s different experience and a different opportunity,” he said. “It’s different from just going to the same old office and doing the same old thing every day, because that’s just not what the new workforce is looking for.”

The co-working space will be a spotlight of the Startup MoveUp Morris campaign, an initiative of the Morris County Economic Development Corp., which focuses on small businesses and helps promote co-working spaces, incubators and accelerator programs housed in municipalities within the county. Meghan Hunscher, the organization’s executive director, said “the stars have aligned” to create The Station, noting that it reflects the goals of MCEDC, the Morris Tech Meetup, The Garibaldi Group and the borough of Chatham.

“I always say that Morris County is a small town with global reach — and it truly is,” Hunscher said. “And supporting the entrepreneur ecosystem is vital to the future of the county and the 39 communities within the county.” 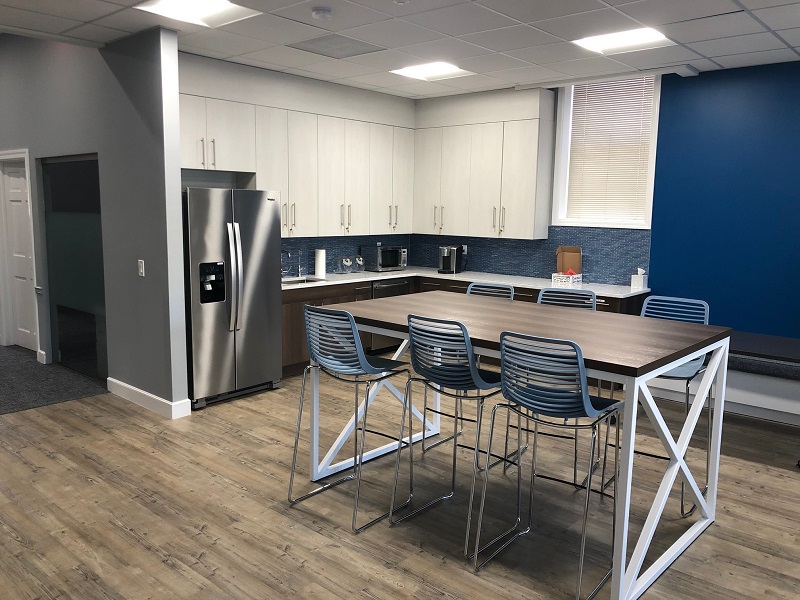 Locally, the space will serve as an anchor to Chatham Borough’s efforts to rebrand itself as a hub for innovation and its plans for redevelopment and future retail opportunities. Mayor Bruce Harris was among those on hand July 2 for what he called “a celebration of the borough’s entry into the new economy.”

He also thanked the Garibaldi family “for having the foresight to create this innovative facility.”

“The borough owes its success over the past three centuries to people who have great ideas and implement them,” Harris said. “And The Station is another one of those great ideas. I view this project as one of the key initiatives underway to make the borough a sustainable community.”

Also on hand was U.S. Rep. Mikie Sherrill, whose district includes Chatham. She offered a sentiment that she admitted “you don’t hear very often: I think right now the suburbs are an incredibly exciting place to be.”

She also highlighted a fact that is often lost on area residents.

Garibaldi, who represents the fourth generation of The Garibaldi Group, said The Station will leverage the network of Morris Tech Meetup as part of its slate of programming. He said the organization, one of the largest tech meetup groups in the state, will find “an opportunity to expand upon that innovative spirit here” with panel discussions, Q&As with business owners, workshops and other offerings.

“We have a lot of things that we look forward to unveiling to everybody in the coming months,” Garibaldi said. “And you can be assured that there will always be something going on here. It will never be quiet and it will always be different and unique.”

Garibaldi plans rebrand, expanded focus as it marks its centennial