The new Hard Rock Hotel & Casino has opened its doors in Atlantic City, with the promise of being a new type of destination that will grow the market and bring new visitors to the resort town.

Hard Rock International and its partners, the Morris and Jingoli families, were on hand Thursday to celebrate the grand opening of the sleek property, following more than $500 million in renovations to gut and rebuild the former Trump Taj Mahal. Amid more than three hours of fanfare — punctuated by the company’s signature guitar-smashing ceremony — the leaders of the new facility touted the business case for expanding its brand in Atlantic City and reopening what a shuttered gaming hall.

“We don’t look at this as a casino,” said Jim Allen, chairman and CEO of Hard Rock International, noting that the entertainment giant operates in 75 countries. “We are committed to this market not just because there’s a gaming opportunity. We believe in Atlantic City, we believe in the state of New Jersey and we truly believe that Atlantic City’s best days are in front of it.”

Speaking during a morning news conference, Allen said Hard Rock will not be the traditional Atlantic City property that gets only 10 percent of its revenue from nongaming sources. Instead, the operator aims to have nongaming revenues make up about 40 to 45 percent, he said, thanks to the brand’s global ties and well-known focus on music and entertainment.

That strength was on display Thursday at the new Hard Rock Live at Etess Arena, the 7,000-seat venue that hosted the guitar smash. The space is part of a resort that includes some 2,000 hotel rooms, a 120,000-square-foot casino floor and 150,000 square feet of meeting and group space, along with 20 restaurants and a long list of other offerings. 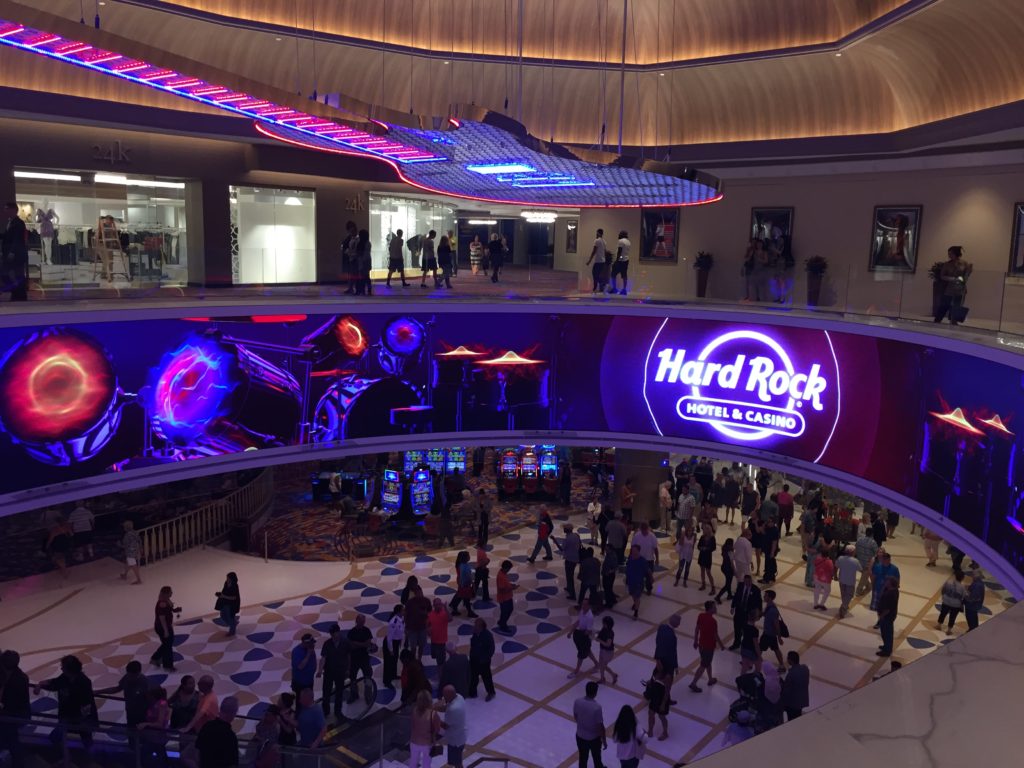 The ownership group, which includes two of New Jersey’s prominent real estate and construction families, unveiled the property some 16 months after announcing their acquisition of the Taj Mahal from Carl Icahn. The announcement was followed by an ambitious plan to completely renovate and transform the distinctive boardwalk property and reopen it under the Hard Rock brand.

“A year ago, we found a building with a broken spirit, but a pulse,” said Joseph R. Jingoli Jr., CEO of Joseph Jingoli & Son Inc., pointing to the security and management team at the Taj, along with the staff at what had been the Hard Rock Café inside the property. “Today, we give it a soul.”

Allen joked that he has “been accused of being a crazy person more than once in my life,” adding: “This could have been my craziest idea.” But he credited the project’s design and development team, which included the construction firm owned by Jingoli and his brother, Michael Jingoli.

“I’m not sure how we got it done,” Allen said. “But if anybody was in this building two, three weeks ago, this could have been a casino and we could have had an amazing drop, because everybody would have bet we would never have made this day.

“But we made it because we have an amazing team, we’ve done this so many times. Certainly we’re going to go through the opening pains when you try to renovate 4 million square feet in less than eight months, but we’re really proud of the product that we’ve now presented to the guests.”

Allen also credited partner Jack Morris, a longtime developer in the state, for helping to navigate the project through New Jersey’s regulatory and political structure. But both men noted that their effort drew widespread support from public officials and agencies, allowing the property to meet its ambitious schedule.

“I’ve been a developer in this state for 35 years and, quite frankly, I’ve never seen this type of cooperation,” said Morris, CEO of Edgewood Properties. “The city, the state — they went out of their way to welcome us and to make this happen, so we have to thank them for that as well.”

Thursday’s ceremony drew a host of dignitaries including Atlantic City Mayor Frank Gilliam, state Senate President Steve Sweeney and members of the Seminole tribe, which owns Hard Rock International. And the grand opening came as an investment group reopened the former Revel, one of four Atlantic City casinos to close in 2014, under the new name of Ocean Resort Casino on the northern end of the boardwalk.

But amid the festivities at Hard Rock, Allen was emphatic: “I want to make sure that everybody understands this is a business opportunity,” he said, along with a chance to spur economic development around the resort town.

For one thing, Hard Rock has hired nearly 4,000 employees, many of whom were out of work following the casino closures. The renovation of the Taj also created some 2,000 construction jobs.

He cited “the amazing strength of the Seminole tribe of Florida and Hard Rock brand,” a nearly $6 billion company with 45 years of history. The business also has investment-grade ratings from all of the Big Three credit ratings agencies: Moody’s, Standard & Poor’s and Fitch Ratings.

“That’s what we represent,” Allen said. “And (with) the amazing success that the Morris and Jingoli families have had not just in New Jersey, but throughout the United States, this is a financially sound project.

“We did not go to Wall Street to borrow,” he added later in the morning. “So you don’t have to worry about some of the challenges of Atlantic City’s past where there’s too much debt, you can’t pay the interest, can’t reinvest in the property. This property is debt-free. We have the ability to operate this business 100 percent to continue to reinvest.”

Morris, for his part, praised Allen and the Seminole tribe.

“I’m really proud of the relationship, what we’ve done and what we’re going to do — and there’s a lot more to do,” Morris said. “This is a great place, Atlantic City is iconic and I’m really honored to be here.”