With two weeks until its grand opening, the Hard Rock Hotel & Casino Atlantic City has unveiled the design for its new state-of-the-art resort on the city’s iconic Boardwalk.

The operator on Thursday released renderings of the roughly 4 million-square-foot property, which will open June 28 at the site of the former Trump Taj Mahal. A partnership of Hard Rock International and the families and Jack Morris and Joseph Jingoli have transformed the property with a sweeping plan to renovate and reconstruct the facility, which was led by locally based SOSH Architects as the architect of record.

“The total renovation of every aspect of this property was no small task and the teams involved in this project have shown extreme talent and dedication to bringing the Hard Rock brand to life in Atlantic City,” said Joe Emanuele, senior vice president of design and construction of Hard Rock International.

The operator touted an approach “that abstractly appreciates the musical-inspired aesthetic” that Hard Rock is known for, which fed into an art-focused design implemented by Jeffrey Beers International. As such, Hard Rock said it paired elements from the Atlantic City locale with notes of rock ‘n’ roll. 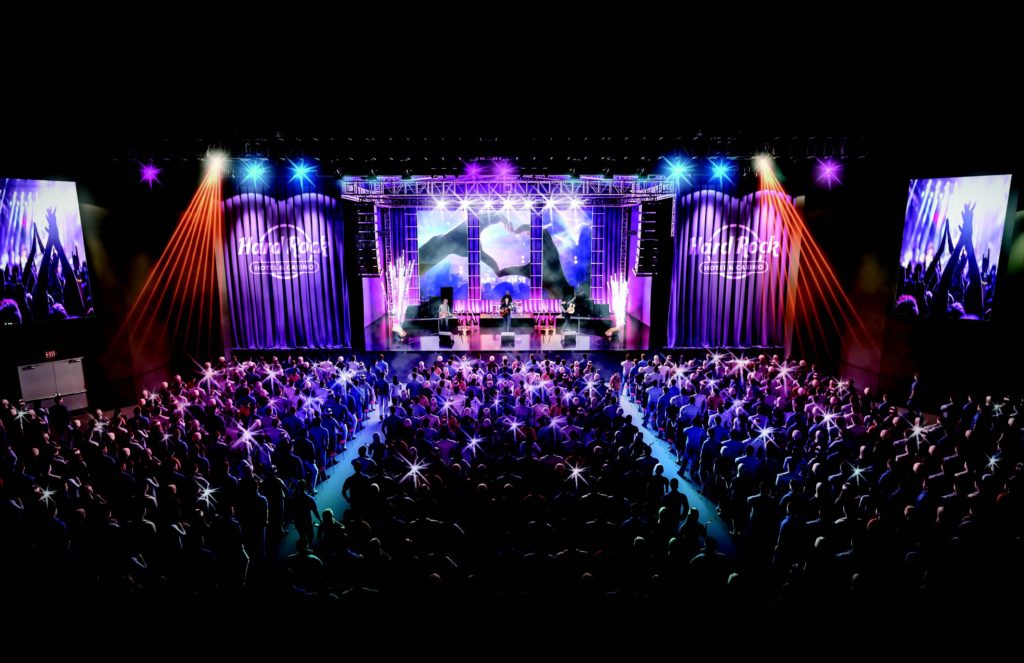 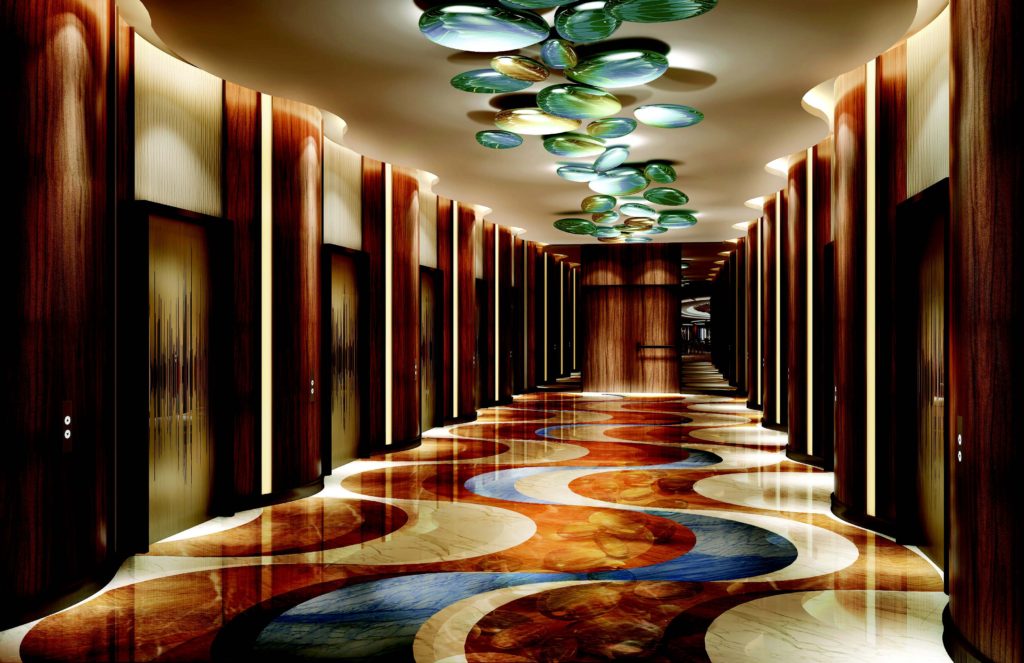 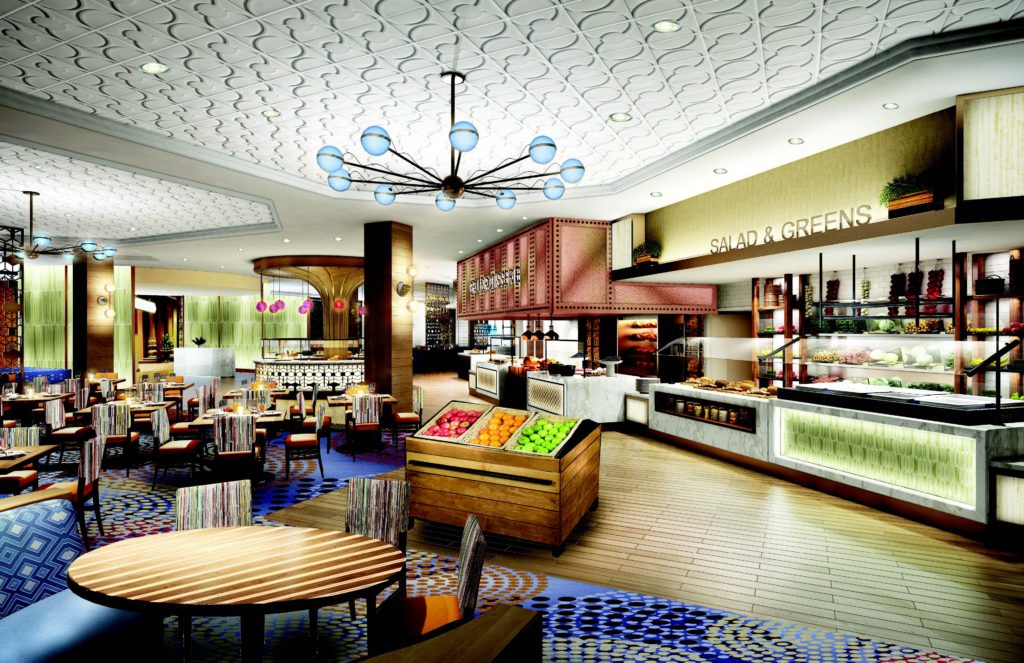 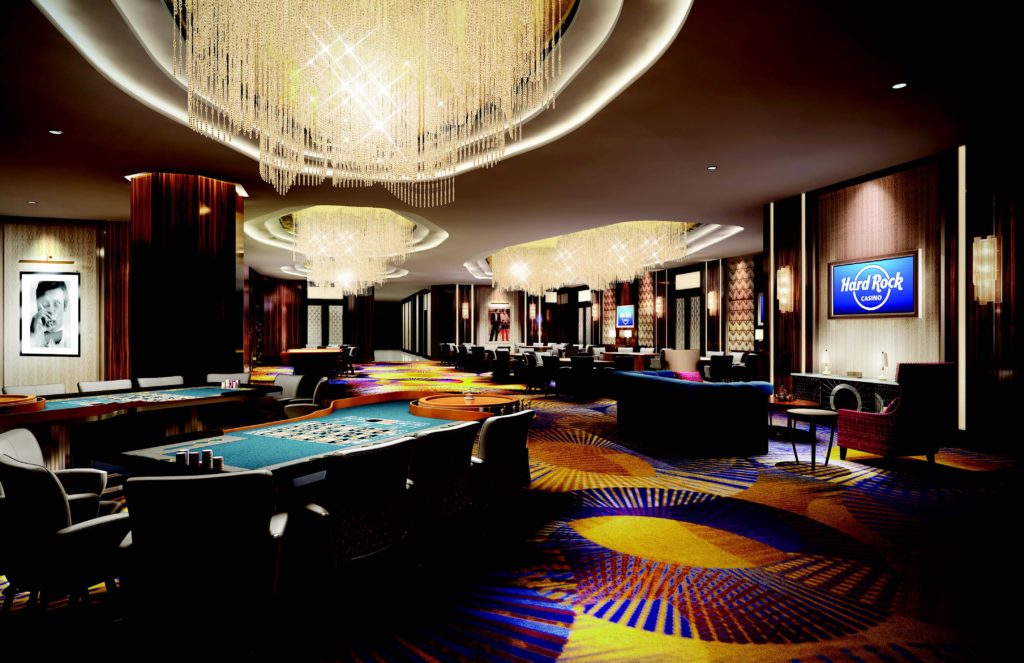 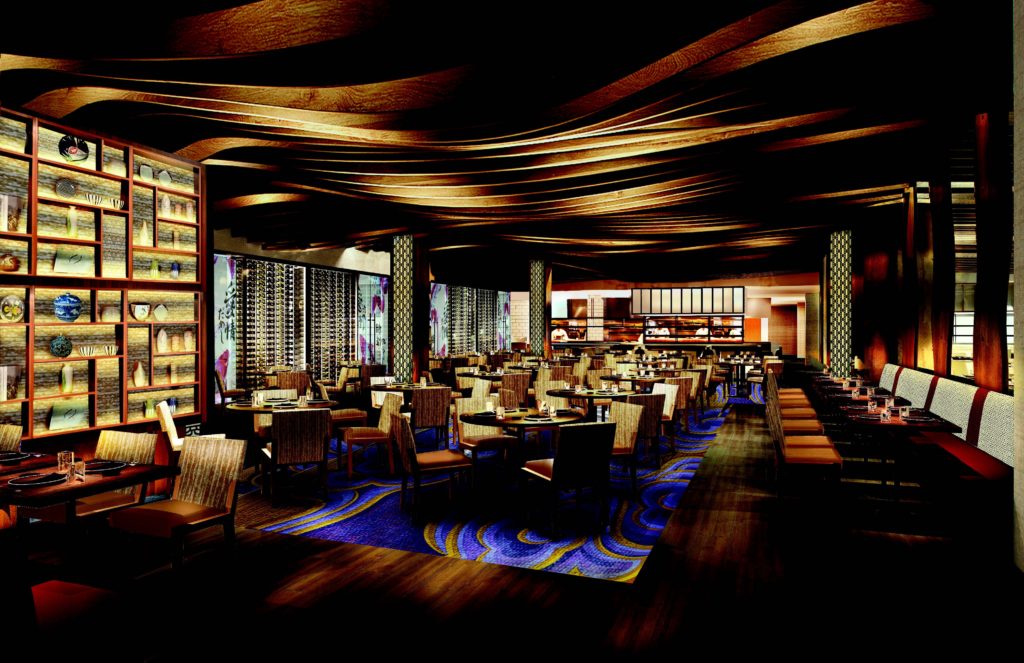 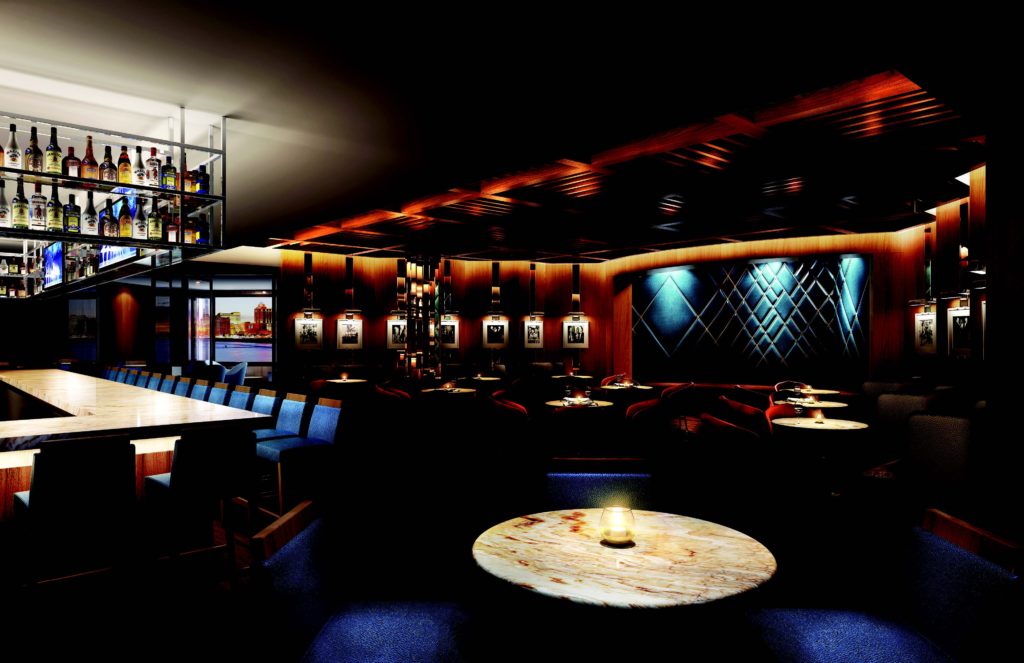 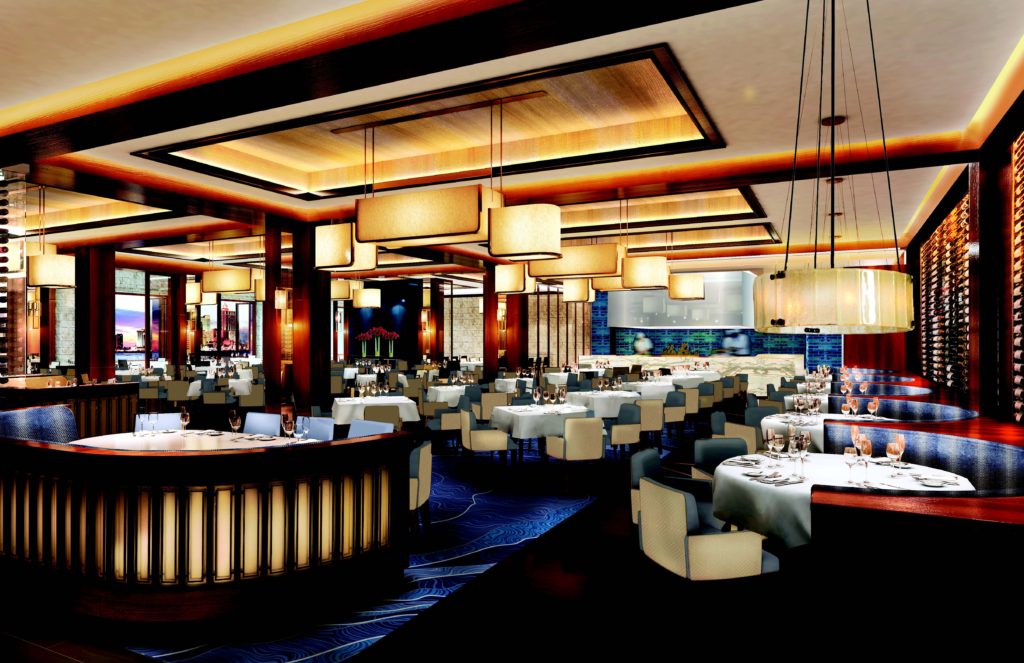 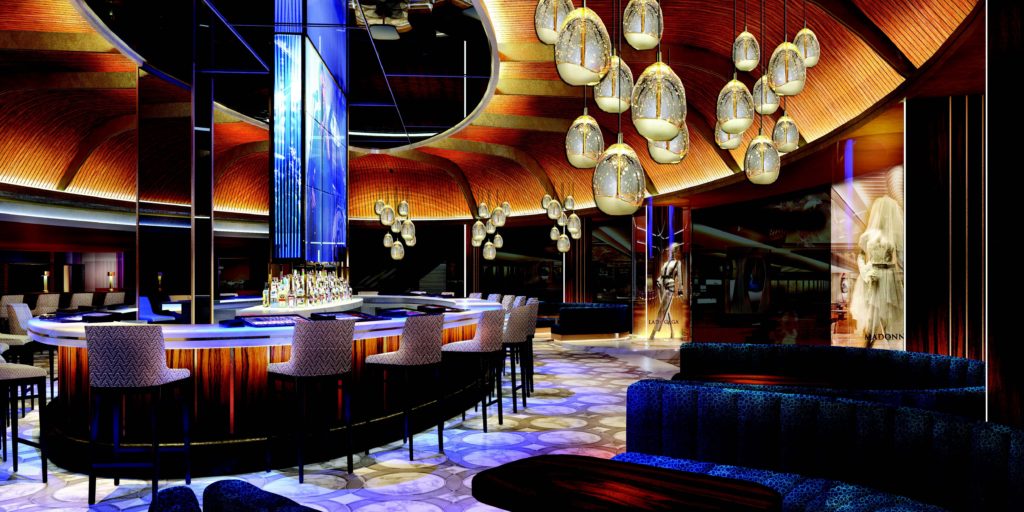 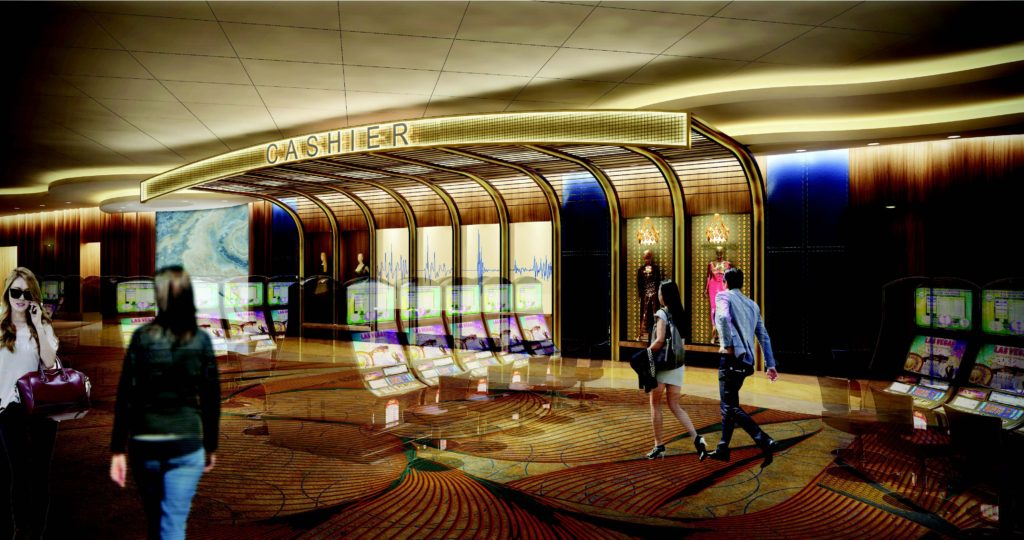 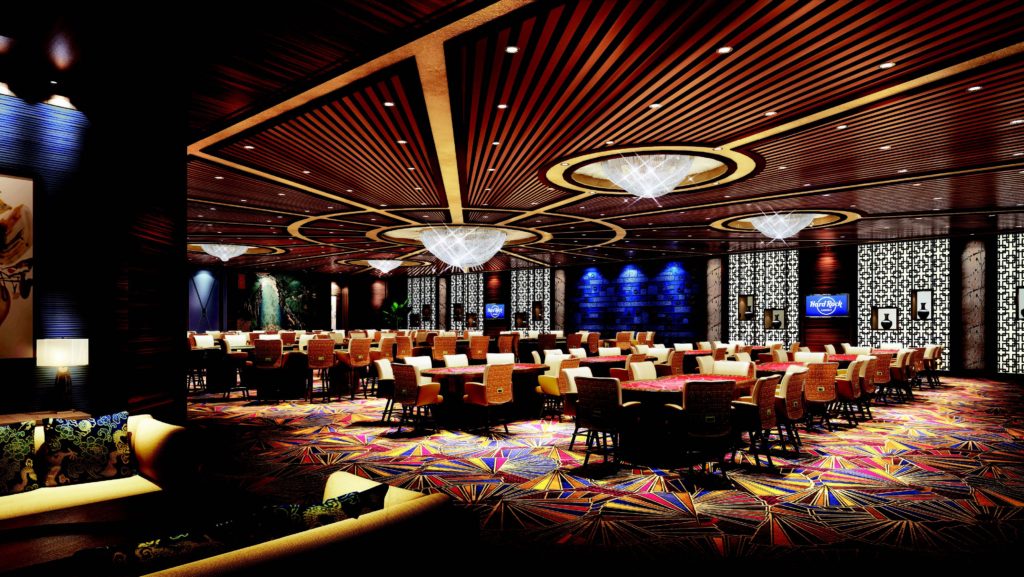 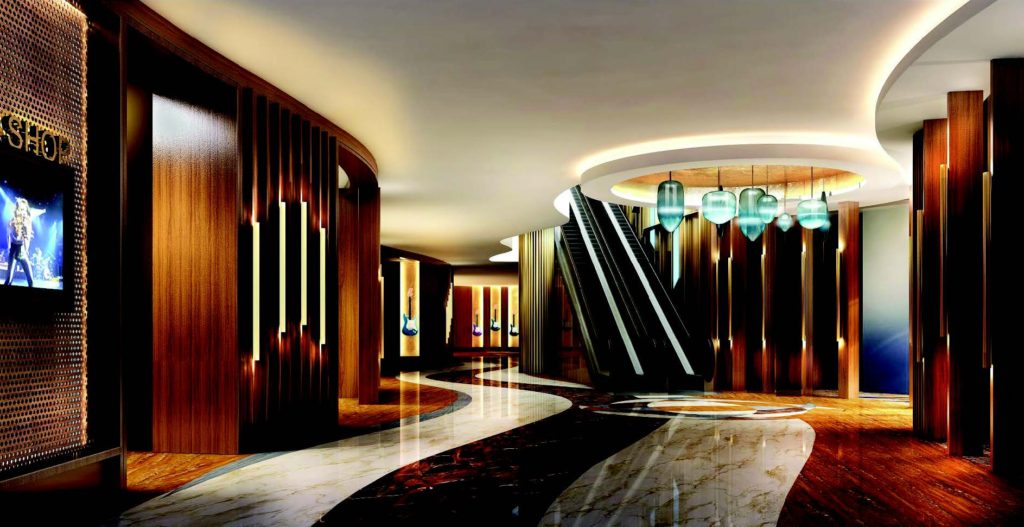 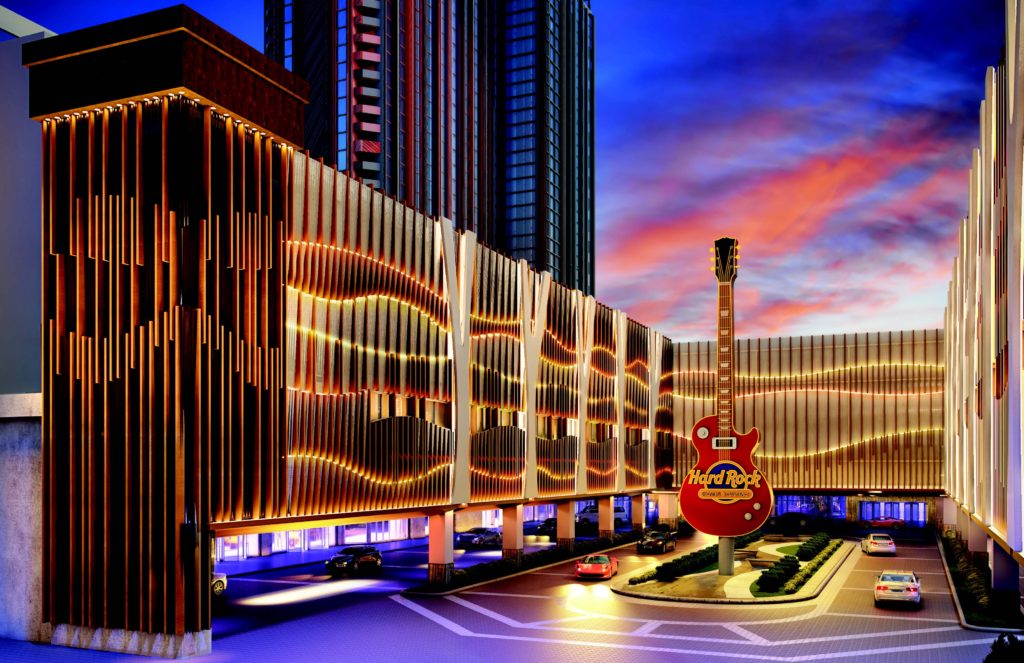 Those details are reflected in the images released Thursday by the operator, including everything from the casino floor and restaurants to Hard Rock Live, its new entertainment facility at the expanded Etess Arena. All told, the property will feature nearly 2,000 hotel rooms.

“We are extremely proud of our staff, supportive of our associates, and humbled by the opportunity to work with Hard Rock, and all the associating design teams to see this great project come to fruition,” said Tom Sykes, principal of SOSH Architects. “With our main office being in Atlantic City, we are personally aware and grateful for what Hard Rock has done to reinforce our boardwalk and community fabric which is so critical to the growth of the city.”

Hard Rock detailed design elements such as a new façade featuring color-changing lights atop a wooded exterior, which pays homage to the wood-based instruments flooding the music scene, according to a news release. The new lobby features a 360-degree bar, offering lounge-style tables and chairs, plus a stage for impromptu musical performances.

The property will offer a gaming floor with 2,100 slots and 120 table games, while Hard Rock pointed to the casino’s ceiling-wide custom chandeliers and glass column memorabilia chambers.

“We are incredibly honored to have been chosen by Hard Rock International and delighted to be part of an incredible team that includes SOSH and JINGOLI,” said Jeffrey Beers, founder and CEO of Jeffrey Beers International. “Working closely together I feel we have respected the music heritage of the Hard Rock brand while also modernizing the overall look and feel through a fresh and contemporary design details, warm tones and rich finishes.”

Hard Rock pointed to other high-profile features such as the new 400-seat Hard Rock Café, which offers panoramic views of the Atlantic Ocean and direct beach access. The property also released images of Hard Rock Live, the newly renovated and expanded 7,000-seat arena.

Hard Rock, Morris and Jingoli announced in March 2017 that they had acquired the shuttered Taj Mahal property from investor Carl Icahn. That gave way to a fast-moving effort to gut and reconstruct the property in barely a year ahead of the summer 2018 opening.

Leading the construction for the project, Jingoli helped to employ more than 1,000 area workers to help deliver it on time.

“The visions of JBI, SOSH and Hard Rock International aligned to create jobs and opportunity and to change a community for the better,” said Jingoli, CEO of JINGOLI. “We are so proud and happy to be a part of this.”

“We are thrilled to be part of bringing the Hard Rock brand to Atlantic City,” said Margaret McMahon, senior vice president and managing director of Wimberly Interiors. “We wanted our design for the hotel towers to seamlessly blend the eccentricity of the boardwalk with the unmistakable excitement that surrounds Hard Rock, creating a truly unique experience for the guests.”