Another site in the Journal Square section of Jersey City is slated for redevelopment, with plans calling for a mixed-use tower with 110 hotel rooms and more than 200 residential units.

City officials said this week that they have designated Canbis LLC as redeveloper of the five-acre parcel, located between Newark Avenue and Cottage Street. The developer, which is partnering with Dream Hotel Group and Shorewood Group, is now expected to buy the site from the Jersey City Redevelopment Agency for $8.7 million. 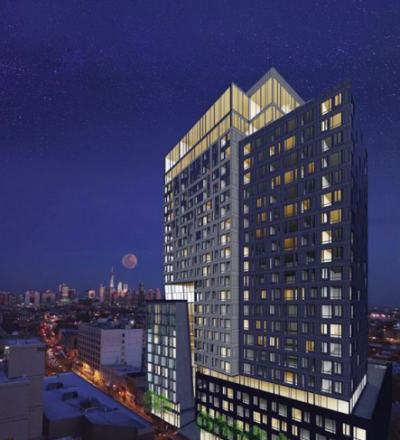 “This selection of Dream Hotel Group to operate a major mixed-use project in Journal Square represents a huge step forward for the neighborhood at the heart of our city, as well as our region as a whole,” Jersey City Mayor Steven Fulop said. “The plan brings with it an internationally known brand that will bring a dynamic energy to the area, as well as hotel rooms, residential units, and tons of retail space. I am excited by the selection of this proposal, and look forward to continuing to push Journal Square, and Jersey City, forward.”

The news follows a 5-0 vote by the redevelopment agency’s board earlier this week. The proposed project is within blocks of other major redevelopment sites in the neighborhood, including Journal Squared, the soaring three-phase residential and retail project by Kushner Real Estate Group and National Real Estate Advisors, and the new 3 Journal Square residential tower by Hartz Mountain Industries and Panepinto Properties.

In a news release, the JCRA said Canbis offered was the best match for the city’s community-driven Journal Square 2060 Redevelopment Plan, which aims to guide the future development within the city’s onetime commercial hub.

“Our evaluation team was impressed by Canbis LLC’s innovative and thoughtful approach to their redevelopment plan in Journal Square,” said Diana Jeffery, acting director of the JCRA. “In addition, through this project Dream Hotel Group proved their engagement and enthusiasm for Jersey City’s culture, and have future plans to partner with local businesses and vendors to integrate the project with the surrounding community.”