Construction is set to begin on Kushner’s massive, mixed-use One Journal Square project in Jersey City, where it plans to build more than 1,700 apartments, upscale amenities and commercial space after a multiyear delay and an infamous legal battle with the city.

The developer on Thursday held a ceremonial groundbreaking for the nearly $1 billion project, one of the largest in the region, just south of the busy Journal Square PATH station. Slated for completion in 2026, the full property will comprise two 64-story glass towers housing 1,723 residential units, 45,000 square feet of upscale amenities and 40,000 square feet of ground-floor retail space that is preleased to what Kushner described as a AAA tenant.

Firm executives welcomed a large crowd to the site — at the corner of John F. Kennedy Boulevard and Sip Avenue — to revel in the milestone after years of turmoil around the proposal.

“There were many times when we thought that this project wouldn’t move forward because there were challenges around economics, around relationships,” Jersey City Mayor Steven Fulop said. “We couldn’t be more thankful that we’ve gotten through that and we’re here today.”

The third-term mayor spoke as construction hummed at a long list of parcels in the immediate vicinity. One Journal Square will soon be among three 60-story buildings under construction within a two-block radius, he said, joining a host of other residential projects and investments that will enhance the neighborhood’s arts and cultural scene.

Fulop proclaimed that “there’s not another city in the country that can speak to the amount of development in this concentrated area.” He also joined Kushner in casting One Journal Square as the most significant addition the city skyline yet.

“Today’s groundbreaking for One Journal Square has been several years in the making for us, and we are thrilled to begin the physical build-out of what we believe will be the crown jewel of this resurgent neighborhood and an important asset for all of Jersey City,” Kushner CEO Laurent Morali said. “Our steadfast commitment to moving this pivotal project forward was founded in our strong belief in Journal Square, both in its present and in its future, and we look forward to bringing our vision to life.”

The two-tower, mixed-use property has been in the works since 2014, when Kushner and partners with KABR Group entered into a redeveloper agreement with the Jersey City Redevelopment Agency, but the relationship between the developers and the mayor began to sour in 2017, after the city denied a tax abatement for the proposal.

Fulop had moved to end the large tax breaks that were once needed to lure developers to the city. But Kushner alleged the denial was meant to curry favor with the city’s heavily Democratic constituency after former President Donald Trump took office in 2017 and tapped Jared Kushner, his son-in-law and former Kushner CEO, as a senior White House adviser.

The developer and the city announced in fall 2020 that they had settled the lawsuit, giving way to final planning board approval early last year. On Thursday, Fulop referenced the project’s sometimes-tortured history and his feud with the firm’s patriarch, Charles Kushner, but said he was thrilled to move ahead with the sweeping development.

“Charlie, what I’ve learned through this, in the last nine years, is that he can be a very good friend and a very, very formidable adversary,” Fulop said. “The reality is that when we cooperate and work together, the best things happen and I think this is a testament to that.

“We’re appreciative of the fact that you’ve been committed to Jersey City and this property.” 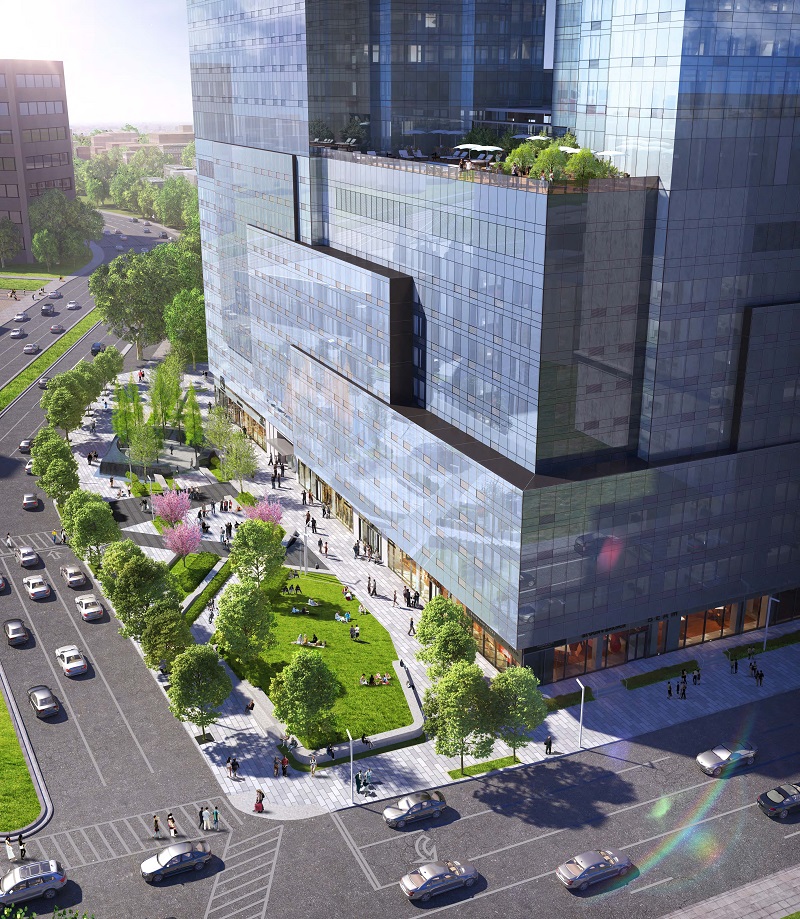 AJD Construction is now building what will be more than 2 million square feet of space in the historic neighborhood and onetime commercial hub, which has drawn billions of dollars in new private-sector investment in recent years. Plans for the Woods Bagot-designed structure will also include a new sprawling public plaza at its base facing JFK Boulevard that will feature green space and seating areas, allowing the buildings to seamlessly mesh into the neighborhood.

“One Journal Square will offer an unparalleled lifestyle experience for residents through thoughtful design, upscale finishes and appointments, state-of-the-art amenities enhanced by our partnership with Restoration Hardware, and a well-connected location brimming with culture and diversity,” said Nicole Kushner Meyer, president of Kushner. “It also reflects our commitment as developers to transform neighborhoods and invest money that positively impacts communities.”

When complete, the two-tower property will have dramatic views of the Hudson River, Statue of Liberty, Ellis Island and downtown Manhattan. Residents will have quick access to the nearby PATH station and transit hub, along with what will be a new location for the renowned Parisian art museum, Centre De Pompidou, and a soon-to-be-restored Loew’s Jersey Theater.

Amenities at One Journal Square, meantime, will include an Olympic-size indoor pool, high-end spa and fitness facilities, a bowling alley and multiple lounges, among others, along with two landscaped rooftop terraces and an outdoor lounge pool with a hot tub.

“One Journal Square will offer every lifestyle element one looks for in a convenient and culturally-rich destination,” said Michael Sommer, Kushner’s executive vice president for development and construction. “We look forward to the day approximately three years from now when Jersey City will have a new, iconic residential development to be proud of when we begin welcoming our first residents who will call One Journal Square home.”