Plans for Hoboken Connect call for enhancing the area around Hoboken Terminal with uses including a 635,000-square-foot office tower, a 389-unit residential building, open space, infrastructure upgrades and a renovation of the transit hub. — Renderings courtesy: LCOR

A developer has unveiled new details of a plan to transform the area around Hoboken Terminal, including a proposed 635,000-square-foot office tower and nearly 400 apartments alongside open space, infrastructure upgrades and a renovation of the historic transit hub.

The New York-based firm, LCOR, has worked in tandem with NJ Transit, local officials and many other stakeholders to craft what it sees as a vibrant, mixed-use project with public benefits that is also protected from the flood-prone Hudson River. That proposal is now under review by the city and pending approvals of a redevelopment agreement, which could come as soon as next month and set it on a path to break ground next year.

Now known as Hoboken Connect, the project would improve a stretch that begins on Observer Highway, just north of NJ Transit’s rail yards, and extends east to the Hudson River.

“Hoboken Connect presents a bold vision to reactivate this vibrant area surrounding the revered Lackawanna terminal in a way that encapsulates the treasured history of the Mile Square City while mirroring the thriving businesses, culture, community, innovation and industry that define Hoboken in the present day,” said Brian Barry, a senior vice president at LCOR.

“We have undertaken a very systematic approach to this opportunity including an extensive visioning process to establish the project’s identity, continuous engagement with key community stakeholders and a design process that embodies each of these elements,” he added. “We look forward to continuing to work in tandem with our project partners to bring this neighborhood asset to fruition and reclaim the waterfront to better serve the city and its residents for generations to come.” 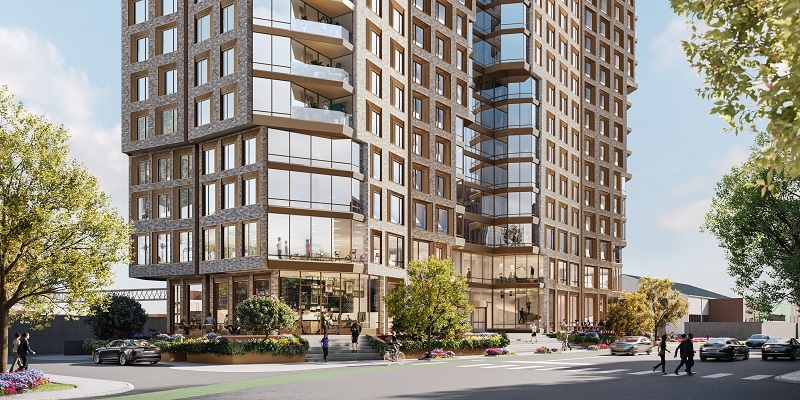 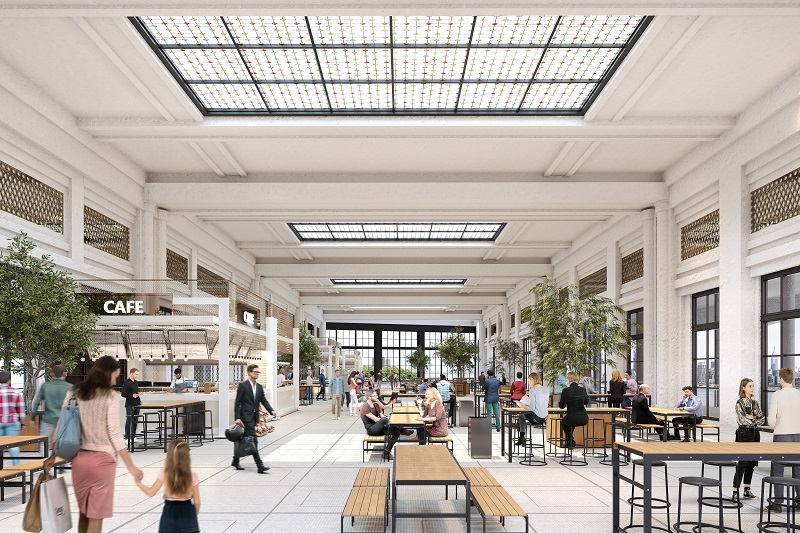 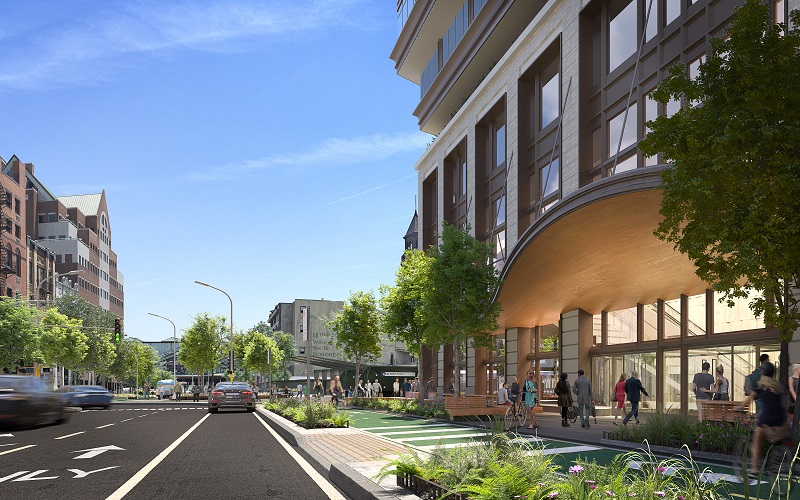 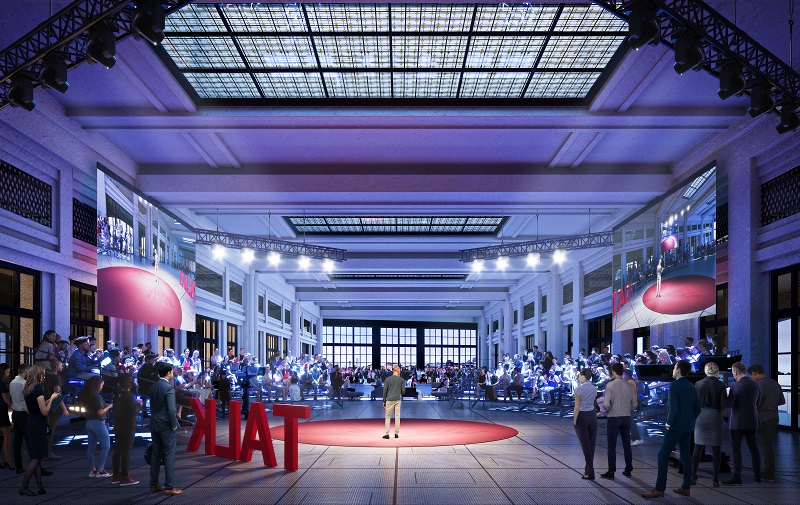 LCOR on Tuesday presented the updated plan to city residents and other stakeholders, seeking to advance a project that is some 15 years in the making but has grappled with concerns about its design and the need for resiliency measures, which have brought additional layers of complexity. The developer and NJ Transit have also had to coordinate with a long list of public entities at the historic multimodal property, but took a key step forward last summer when it unveiled a team of design, construction and leasing professionals for the project.

Plans for the site now include a CetraRuddy-designed, 389-unit residential building on Observer Highway — across from the Bloomfield Street and Washington Street intersections — with 20 percent of the homes designated for lower-income renters. The project also calls for a 20-story, 635,000-square-foot office tower at the corner of Hudson Street and Hudson Place — at what is currently a parking lot and an abandoned building — closer to the terminal and PATH station entrances, with ground-floor retail space.

Those uses will complement what Barry described as a sweeping restoration of Hoboken Terminal. That includes raising the easternmost plaza to protect against flooding from the Hudson River, as well as the creation of a food-focused market “that seamlessly transitions” from the plaza to the interior to the ferry terminal slips, Barry said.

Additionally, LCOR aims to restore and activate the building’s second floor, which has been largely unused since double-decker ferry service ceased in 1967, through public-facing uses such as exhibitions and other programming.

“The idea is to activate both the ground and the second floor for both residents and commuters and celebrate this building in the way that it should be,” Barry said. 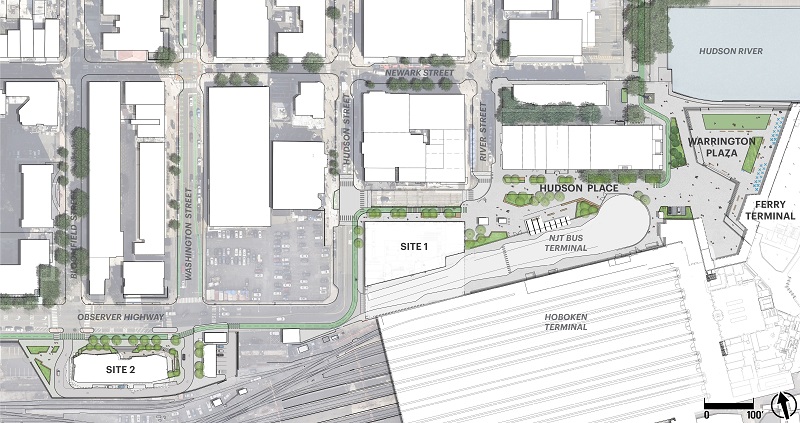 Tuesday’s presentation followed what Barry said was a critical two years since the adoption of an amended site plan in 2020. Since then, the team has worked to “establish a project identity” that was forward-looking, while advancing all aspects of predevelopment work.

LCOR did so while working within the complex physical footprint of the transit hub, as it navigated the interests and sensitivities of city residents. It has also tweaked the design of the office and residential buildings to preserve view corridors in the neighborhood.

“It’s a complicated site for all of these reasons,” Barry said during a preview of the presentation. “And we had not only the constraints to contend with to ensure that we’re not impacting infrastructure or operations, but that we’re also accounting for key considerations and what the design and the execution phase of this process should account for, from life safety and accessibility through to the significance of historic preservation, resiliency and making sure that, at end, we integrate this into the character of Hoboken.”

He said that, if the project secures an approved redevelopment agreement next month, it can move forward with a community design process, finalize a financial agreement with the city and aim to break ground in the second quarter of 2023.

“That is the goal, with the project finishing some time seven, eight years from now,” he said. “The intent is to be moving on both private development and public infrastructure components simultaneously so that there is a public benefit that’s coming along with the private development in each phase of this process.”