Museum Parc, a mixed-use project to create a campus around The Newark Museum of Art, as depicted in this rendering, will include 250 new apartments and commercial space, a 4,000-square-foot art and program gallery, new outdoor amenities, a more visible sculpture garden and renovations for the education wing. — Courtesy: Newark Museum/L+M Development Partners

A developer is slated to bring 250 apartments and retail and dining space to downtown Newark as part of a newly announced, $85 million campus around The Newark Museum of Art.

The cultural institution announced Friday that it has teamed with L+M Development Partners and KSS Architects to build what’s known as Museum Parc, a mixed-use project that will help it create a walkable destination around its Washington Street location. The expansion will include an additional 4,000-square-foot art and program gallery for the museum, new outdoor amenities, a more visible sculpture garden, renovations for the education wing and the new apartments and commercial space.

“Our goal is to deliver to the city, state and region, a new cultural hub, with The Newark Museum of Art front and center,” said Linda C. Harrison, CEO and director of The Newark Museum of Art. “We are thrilled to share the early steps of how we are significantly increasing our presence and impact throughout the state. This project leverages our potential to enhance the viability of the arts for hundreds of thousands of visitors each year.”

In a news release, the museum said $80 million of the project’s costs would be funded through a partnership with L+M, the firm behind some of the city’s highest-profile developments in recent years, and KSS. Museum Parc is the cornerstone of a three-year vision plan to reimagine the current facility’s assets and become a top destination for arts and culture, the institution said, with a potential completion coming as early as 2024.

The museum added that the project will include 50 units of affordable housing.

“As a cultural anchor in the city for over 100 years, I am proud to see the museum deepen their investment in Newark and further raise the profile of the city as an art and cultural destination where people can live and experience world-class art,” Newark Mayor Ras J. Baraka said. “This proposed project demonstrates the museum’s commitment to growing their footprint, notable at a time when cultural institutions are scaling back due to the challenges of the COVID-19 pandemic.”

Museum Parc’s first building will be six stories and consist of a new gallery for the museum and the first 90 apartments, the news release said. The new space represents an extension of the building’s existing contemporary galleries, with a new street-level facility for both contemporary exhibitions and public programming, allowing for more flexibility to present contemporary works in combination with the museum’s schedule of community events.

The second building, currently slated to be 12 stories, will contain an additional 160 apartments and 2,400 square feet of retail space. Each structure is slated to have a host of amenity spaces.

“Museum Parc is another great component which will contribute to the existing landscape of arts and culture that’s embedded into the fabric of our city,” said state Sen. M. Teresa Ruiz, whose district includes Newark. “In addition, the integration of residential units maximizes an existing space and reimagines it for long-term use. Mixed-use projects, like the one proposed here, are becoming increasingly popular and add a whole new dimension to local communities and the lifestyle and daily living in urban centers like Newark. I commend the new vision of The Newark Museum of Art for taking a leadership role in urban design for the largest city in the state.” 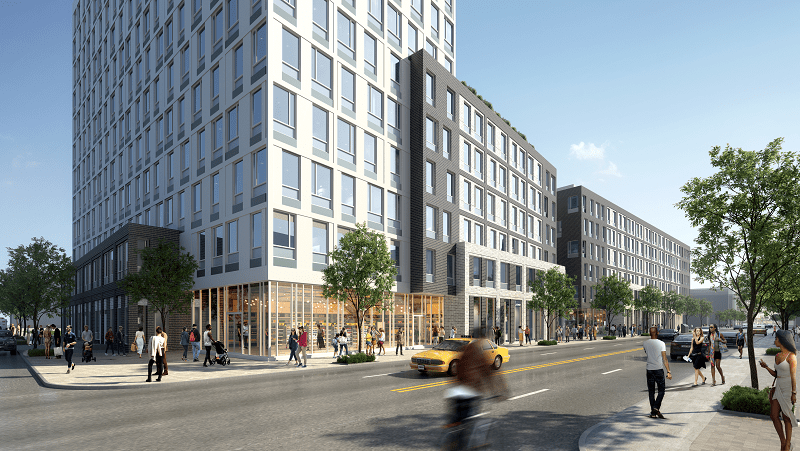 Stakeholders said the project will also enhance the public’s visibility of the museum and create a direct entryway to areas that are currently confusing and cumbersome to reach. That will include a new street entrance for the museum’s Billy Johnson Auditorium, which will provide access to the multifunctional space and new opportunities for enhanced community partnerships and programming, while students and educators will also be able to gain access to the museum through a reimagined education wing.

Outdoors, the Alice Ransom Dreyfuss Sculpture Garden will receive a fresh design, including the installation of new artwork, a reconfiguration of the walls to provide more direct and inviting access and the application of a more inclusive curatorial strategy, the news release said. The museum said it also expects to enjoy new revenue streams with the addition of a full-service, sit-down restaurant and additional catering opportunities throughout the Museum Parc footprint.

L+M’s best-known projects in Newark include the restoration and conversion of the former Hahne & Co. department store and former New Jersey Bell offices on Broad Street, both of which are now mixed-use properties. More recently, the New Jersey Performing Arts Center tapped the firm to help expand its own footprint in the city as part of a plan that includes mixed-income housing, restaurants and cultural space.

“This is a transformative project on several levels,” said Peter Englot, a member of the trustees of the Newark Museum Association and senior vice chancellor for public affairs and chief of staff at Rutgers University-Newark. “As my fellow trustees and community leaders on the museum’s real estate task force have remarked, it will elevate engagement with all of the museum’s stakeholders through inclusive experiences that spark curiosity and foster community. But Museum Parc’s strikingly beautiful presence at this key intersection also will elevate the aesthetic experience of Newark’s arts district and serve as a catalyst for civic interaction.”