A rendering of a modernized 2 Journal Square, a 300,000-square-foot office building in Jersey City that is undergoing a series of interior and exterior improvements. — Courtesy: HLW

A design firm is detailing its overhaul of a well-known office building in Jersey City, with plans calling for updated common areas and new street-level retail and restaurant space.

The firm, HLW, is working on behalf of Gaia Real Estate to modernize the 300,000-square-foot property at 2 Journal Square. A team of five is leading the extensive renovation at the 32-year-old building, seeking to tap into the ongoing revival of the city’s onetime commercial hub.

Completion is slated for September.

“2 Journal Square’s original front door put its back to the neighborhood,” said Michael McNamara, a senior project architect with HLW. “The new HLW concept reverses the entry, engaging the community along JFK Boulevard.” 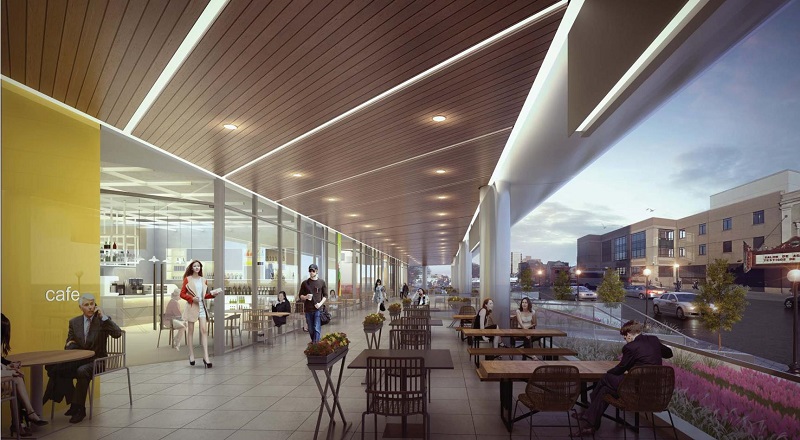 HLW’s plan calls for redesigning much of the building’s interiors, including amenities and lobbies, seeking to draw a fresh, modern clientele to 2 Journal Square, according to a project description. Those interiors consist of classic whites, blacks and grays, with modern fixtures, paneled wood ceilings and marble and wood accents throughout the rest of the space.

The new-look lobby will also feature a smart directory for visitors and a second-floor elevator bank with a stylish glass barrier, HLW said.

The firm has also redesigned the building’s ground-floor retail space, which will account for roughly 30,000 square feet. Its plans depict a chrome and glass façade with a modern, layered appearance and an exterior terrace with an overhang above the glass-walled stores.

Under the new design, the façade of the retail spaces was reoriented parallel to the streetscape to welcome pedestrians along JFK Boulevard and those arriving from the PATH station.

“This new, welcoming front door will provide much needed retail for the growing residential population in Jersey City,” McNamara said. “2 Journal Square will become a neighborhood hub for residents and commuters alike.” 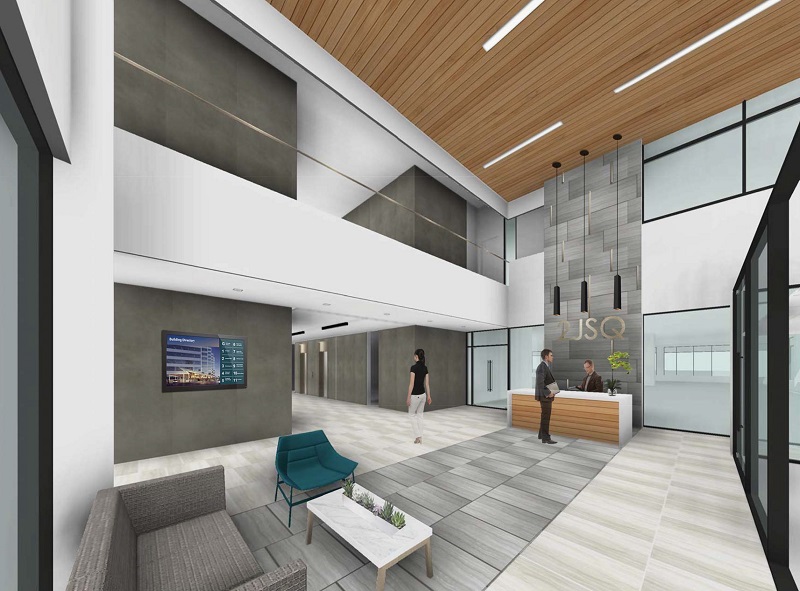