Plans for PRC Group’s redevelopment in Hightstown include restoring and converting two historic mill buildings — including a 50,000-square-foot concrete structure (top image, far right) and an adjacent 101,000-square-foot brick property (not pictured), both on Bank Street — to create 150 loft-style apartments. The developer also plans to build 43 new townhomes on the western edge of the site. — Renderings by Feinberg & Associates P.C./Courtesy: PRC Group

The site of an iconic former rug mill complex in Hightstown is rich with history, with origins dating back to the late 1800s. Sadly, though, its most recent years have been marked by a revolving door of developers, whose plans to revive the property have fallen flat.

It’s a cycle that PRC Group hopes to break.

“The skepticism from the people in the area is real and justified,” said Greg Lentine, PRC’s senior vice president of sales and marketing. “There’ve been so many false starts, so we’re hoping we can really show them our commitment and get this going.”

The Red Bank-based developer, whose founder has deep ties to the Mercer County borough, is moving ahead with a plan that includes both ground-up construction and the adaptive reuse of two large industrial buildings on the site. The result would be a mix of 386 luxury apartments and townhomes along Bank Street, between North Main and North Academy streets, providing a new infusion of housing just steps from the downtown.

PRC has secured key approvals from the borough’s planning board, advancing further than other developers have. It’s also earned the trust of local leaders who have targeted the site for redevelopment for more than 15 years.

“They really seemed to understand the vision, architecturally, of what the borough is about and what it wants to become,” said Charles “Lee” Stults, a councilman and former planning board member. “Prior projects were a little more modern in their architecture, which really didn’t fit in with the surrounding neighborhood or the downtown. And PRC and their team really understood and listened to the borough about what they wanted.”

The rug mill property, which spans about nine acres, is currently home to dilapidated industrial buildings with overgrown vegetation. PRC intends to restore and convert two of the properties — a 101,000-square-foot brick structure and a 50,000-square-foot concrete building — to create a combined 150 loft-style apartments.

At the easternmost end of the site, along Main Street, the developer will construct a new ground-up, 193-unit multifamily building. The new apartments, along with 43 townhomes on the other end of the property, would likely draw a renter pool that includes commuters to Manhattan.

“You’re only two or three minutes from the New Jersey Turnpike,” said Robert M. Kaye, PRC’s chairman and CEO. “So in truth, on a typical weekday, the bus can pick you up here and you can be in New York City at the Port Authority in about an hour.”

Such is the promise of the blighted yet historic property, a fixture in the 1.27-square-mile community. According to the Hightstown East Windsor Historical Society, the site became the home of the Hightstown Rug Company in 1898 and was operational into the 1960s, when it was sold to United Industrial Syndicate Inc.

The property had other users and owners in the ensuing years, including McGraw Hill and Philips Lighting Co., but has been vacant since the late 1980s. In recent years, the complex has notoriously attracted developers that would later back out amid clashes with borough officials or poor economic conditions.

“Company after company, person after person would get involved, never cross the finish line and then lose it,” said Kaye, who has his own connection to the town, having attended the nearby Peddie School as a teenager in the early 1950s. He is also an emeritus board member and benefactor of the co-ed boarding school, which is about a mile from the mill complex.

It was about three years ago that he and his team first took note of the beleaguered site.

“I had immediate interest in it, if only because of my history with the Peddie School and Hightstown,” Kaye said. He credited Bill Feinberg, a longtime architect for the firm, and Stan Koreyva, who joined PRC in 2018 as its president and chief operating officer, with crafting the adaptive reuse and redevelopment plan that would resonate with borough officials.

“They’re the two geniuses behind the concept,” Kaye said. 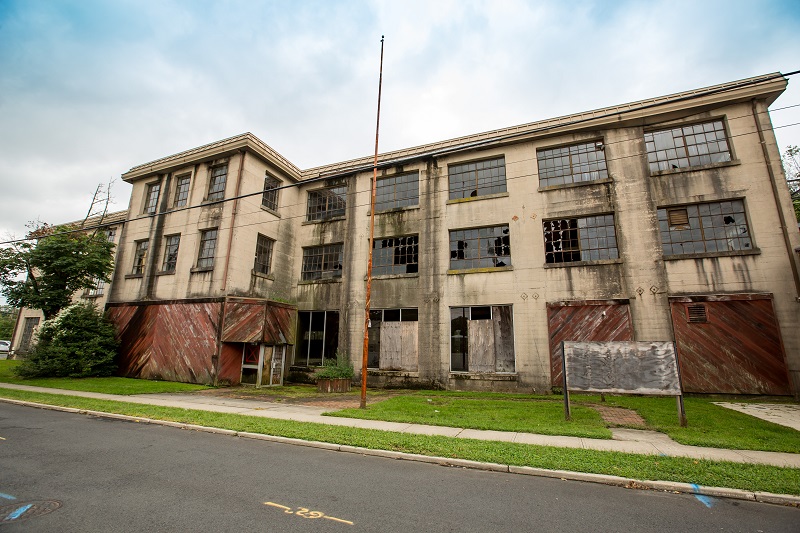 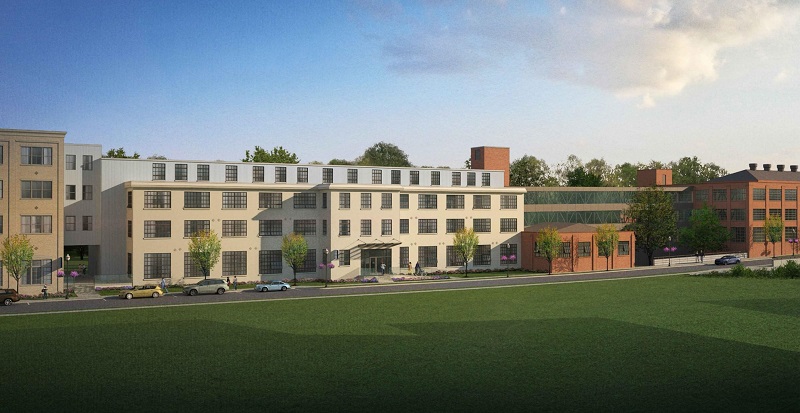 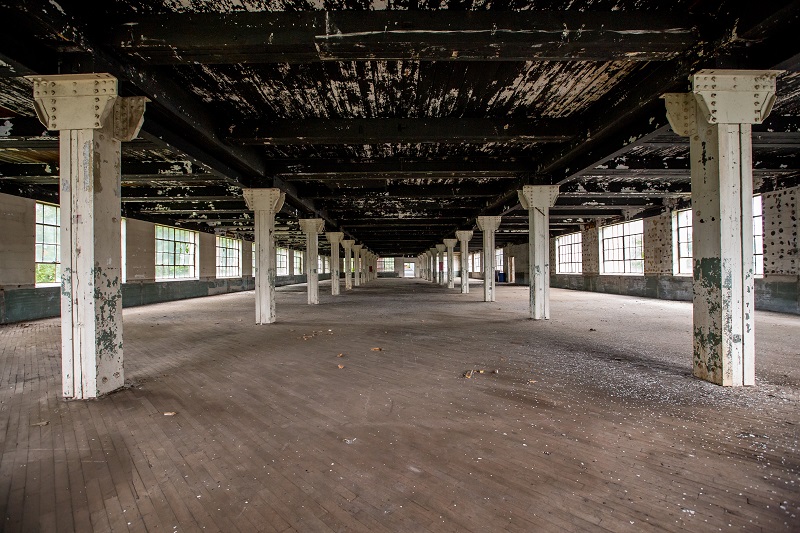 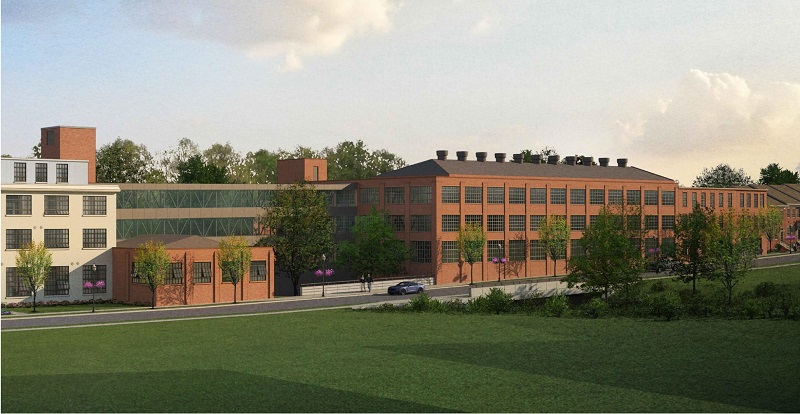 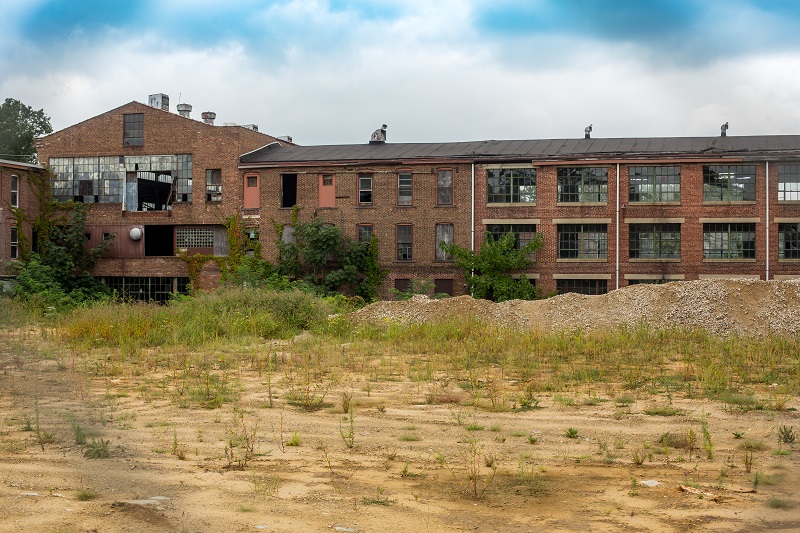 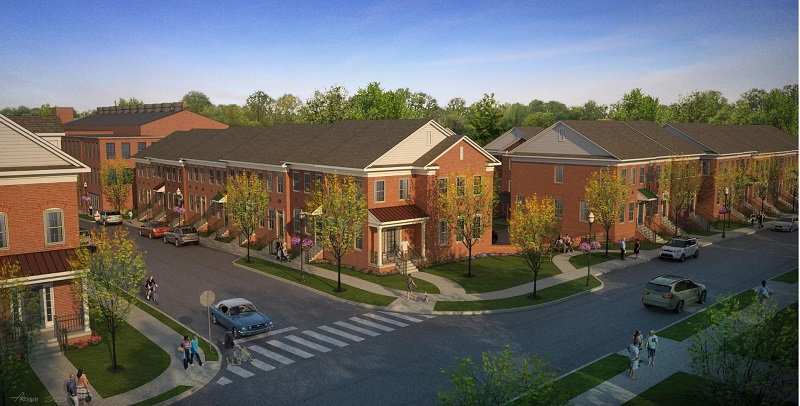 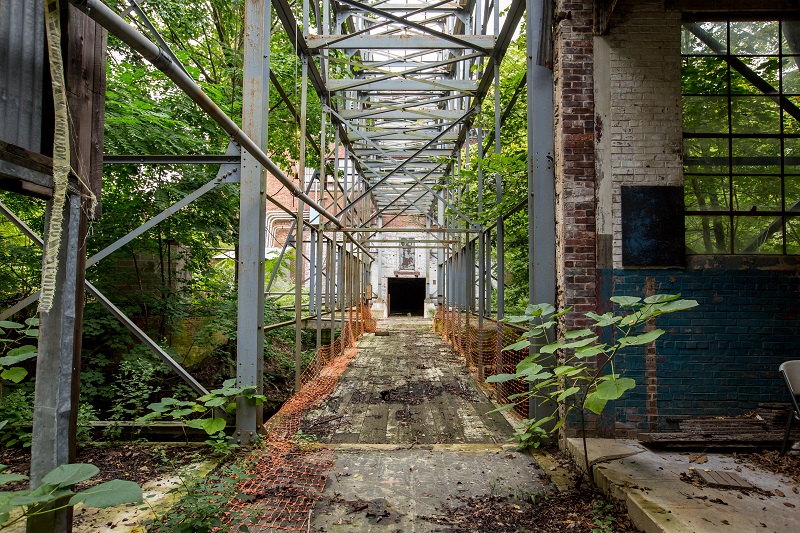 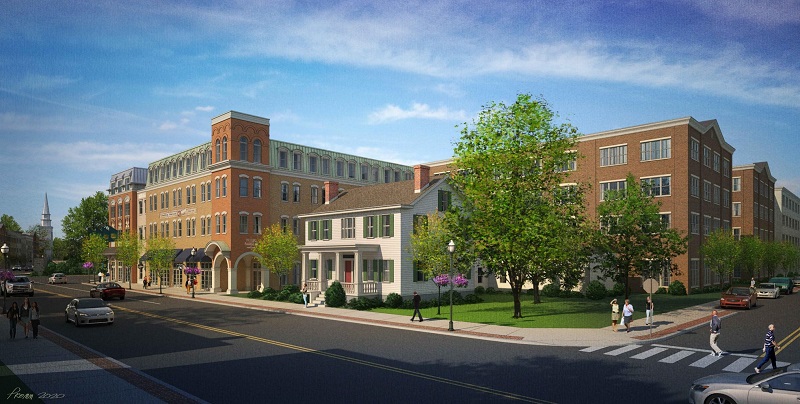 PRC has made some notable changes to what previous developers had put forth. For one thing, it has added townhomes to serve as a sort of buffer between the converted mill buildings and the single-family homes that surround the property.

“The design of the townhomes is to complement the surrounding community,” Lentine said. “That’s why it’s set up that way — so that it’s not a stark transition, so that it will blend immediately with everything around it.”

The development team also nixed plans for about 30,000 square feet of retail space, Feinberg said, so that the project would not compete with the downtown. If anything, existing merchants on Main Street “can benefit from the fact that we’ll have more people living in town.”

What’s more, he and Lentine pointed to the six-and-a-half story parking garage that will be built near Main Street with 30 spaces for the public and six for the fire company, which is adjacent to the project site.

As for the apartments, Lentine expects the units to have the kind of modern, upscale aesthetic that has become synonymous with northern New Jersey. He noted that most of the rentals in and around Hightstown are outdated, garden-style apartments, providing an opportunity for PRC to fill a void in the market.

“The finishes will be the urban look, but the design is going to be for people in this community,” he said. “We know we’re not going to draw people from Jersey City, Hoboken or Harrison.”

PRC expects to have an abundance of two-bedroom options in order to cater to existing Hightstown residents, Lentine said. But the final product will still be designed to draw a diverse mix of tenants.

“We may have people of an older age … down to students and people who are working out of the city,” said Feinberg, president of Voorhees-based Feinberg & Associates P.C. “So we have a lot of variety, from the townhouses to the duplexes and a lot of one-bedroom dens for working at home.”

The project still requires approvals from the borough council, Mercer County and the state Department of Environmental Protection, PRC said, not to mention negotiations for a payment in lieu of taxes agreement. That means construction is unlikely to begin until next spring at the earliest, but the firm has already taken steps that have caught the attention of local residents. Last fall, for instance, PRC tore down a 20,000-square-foot metal storage building on the west end of the site, clearing the way for what will be 35 of the 43 townhomes.

“Now they realize it’s actually real,” Koreyva said. “Now there is more excitement than ever.”

The developer also plans to raze a historic but derelict yellow home across the street in order make room for the other eight townhomes. In the process, it will build a sort of replica of the residence, which will ultimately house a 3,000-square-foot clubhouse, a manager’s apartment and a leasing office.

PRC’s attention to history will be consistent throughout the site. Preserving the brick and concrete mill buildings will require refurbished exteriors and the installation of replica windows, a project for which it will seek tax credits under the Federal Historic Preservation Tax Incentives program.

“Both council and planning board have always felt that those buildings should be preserved to the greatest extent possible,” Stults said, noting that the tax credit program will come with additional guidelines for the adaptive reuse project. “That’s another win for the borough.”