John Sartor, CEO and president of PS&S, speaks during a recent tour of the firm’s new headquarters at 3 Mountainview Road in Warren — All photos by Aaron Houston/Courtesy: Zito Partners

Professional services firm PS&S has unveiled its new headquarters in Warren, where it has created a safe, socially distant setting with the flexibility to respond to the evolving health crisis.

The architecture, engineering and environmental consulting practice, which had spent more than four decades at a prior location in the township, has moved to 3 Mountainview Road as part of a 44,000-square-foot lease announced last fall. The new space provides the firm with an open, modern design with a more efficient footprint for as many as 180 employees, even if most of its team continues to work remotely during the pandemic.

PS&S has taken several steps to balance the short-term reality of COVID-19 with what will be the long-term benefits of an upgraded work environment. For instance, the firm has held off on bringing traditional furniture into its large conference rooms, instead opting for flexible seating that can be properly spaced.

“This way we can actually keep our safe distance and utilize the space,” said John Sartor, CEO and president of PS&S. “And, quite honestly, it’s actually going to benefit us for the next six to eight months because we have larger spaces like this and we have the ability to still bring in six or eight people.”

The 58-year-old firm has relocated from its longtime home at 67B Mountain Blvd. Extension, about six miles away, under a lease with Kushner Real Estate Group. Its team will occupy parts of two floors within the three-story, 105,000-square-foot property just south of Interstate 78, which boasts a newly renovated lobby and other upgrades by the landlord.

As Sartor noted, the firm had completed its original design and was on schedule to begin moving in by August. When COVID-19 began to spread across New Jersey in March, the team scrambled to reconfigure the seating plan, minimize high-touch surfaces and create a new strategy as its employees shifted to remote work.

That included rethinking common spaces, such as pivoting from many of its larger and medium-sized meeting rooms to smaller rooms suited for videoconferencing, he said. He added that the firm has minimized the use of fabrics in its workstations and switched to easy-to-clean materials and surfaces, a trend he expects to see become more permanent.

PS&S has also kept much of the furniture from its prior office as a temporary solution and a means of staying flexible as needs change.

“At some point you’ll hit stability again,” Sartor said. “But for the next couple of years I think it’s going to be all about flexibility. And I think you’re going to see the furniture manufacturers respond to that in terms of the environments and types of things we see.”

KRE helped to address health and safety at the building level by upgrading the HVAC and filtration systems at 3 Mountainview. The property also has a cleaning crew that comes in three times a day to wipe down high-touch surfaces such as elevators and door handles. 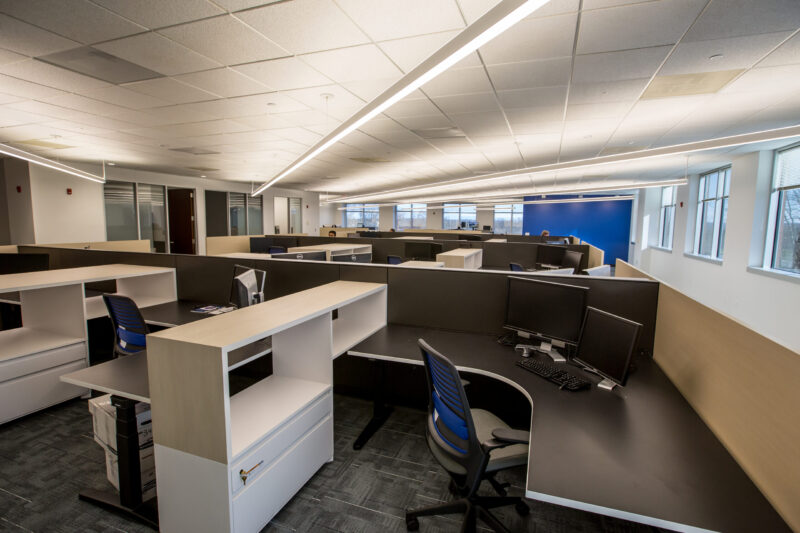 Putting COVID aside, Sartor said there is still much to be done in order to complete the transition. That includes design elements that will pay tribute to the company’s history and co-founders Bill Paulus, Wally Sokolowski and Anthony Sartor, John’s father.

In the meantime, Sartor credited his team with remaining productive and keeping projects on track, despite working remotely or on staggered schedules. Technology has played a key role.

“The ability to collaborate virtually has really changed the service business in terms of our ability to continue servicing clients,” he said. “Absent that, I’m not sure what would have happened. It’s just amazing.”