Rotwein + Blake has used 10 Sylvan Way, a recently completed, 126,000-square-foot office building in Parsippany, to create a showcase for the potential role of virtual and augmented reality in the design process. The firm and its consultants used renderings and other pieces of the design process to create virtual models of the property, which can be experienced using a smartphone, tablet or headset. — Courtesy: Rotwein + Blake

With more than three decades in the design industry, Lance Blake has seen the evolution in how architects perform their most essential function — from hand-drawing to rudimentary computer-aided design to the use of sophisticated 3D models.

In every case, he said, “you have to embrace the technology.”

It’s why Blake sees an opportunity for his firm, Rotwein + Blake, to tap into the next wave of innovation in the design of commercial real estate: virtual and augmented reality. The Livingston-based firm is now hoping to integrate the technology into its practice going forward, seeing it as a tool that can both enhance the design process and create additional value for its clients.

“It’s just the next generation of technology,” said Blake, the president of Rotwein + Blake. “I see it as the future and as a hugely powerful tool.”

The design firm recently partnered with the Glimpse Group, a consultant and holding company for virtual and augmented reality startups, as part of its plan to introduce the platform to its real estate clients. Doing so could serve two important purposes, Blake said, including to “help our clients visualize and understand what we’re doing and what they’re getting and … to be able to market ourselves and be at that forefront for a firm of our size to compete on that level.”

He said the firm can introduce virtual reality as early as when it designs the frame of a project in Revit, the building information modeling system. Virtual reality refers to artificial, computer-generated simulations of real-life experiences, while augmented reality is when the real world environment is overlaid with virtual information.

“Even before we get to the point of showing it to a client, it’s great for us as a design tool,” Blake said. “We used to and still do — through Revit models on a screen — design a building or model, but (this allows us) to spin around it and look at the volumes and the forms and tweak it from there. To actually live it, it’s just incredible.”

And according to D.J. Smith, the Glimpse Group’s chief technology officer, doing so can provide the architect and a client with a better feel for the “scale and flow” of a building.

“How big the space feels is really powerful because you can’t get that from a line drawing,” said Smith, a former senior project manager with The Walsh Co. and later Avison Young. He also touted the ease of creating many types of 3D models: “If you have an architect sitting there and they want to feel what that space looks like, it’s drag and drop.”

Aside from its role in the preconstruction process, Rotwein + Blake also sees VR as a benefit to brokers, property managers and others involved in marketing real estate. Brokers and owners can offer a virtual tour either before construction begins, using the completed designs, or even after construction is complete by incorporating 360-degree photography of the finished product.

“I think it starts with marketing,” Smith said. “That’s kind of the lowest-hanging fruit, but now we’re starting to migrate toward the more useful purposes, such as visualization and collaboration.”

Rotwein + Blake has created a case study using a recently completed office building, 10 Sylvan Way in Parsippany, which it designed on behalf of Normandy Real Estate Partners and MRY Associates LLC. Using an app and a virtual model developed in conjunction with the Glimpse Group and Jimmy Giliberti, an executive with the VR software firm WorldViz, Rotwein + Blake can now use a smartphone or tablet to show a three-dimensional model of the 126,000-square-foot building.

The firms have also created models that allow for virtual tours inside 10 Sylvan, using either the Rotwein + Blake app or a high-end virtual reality headset. Both platforms allow a user to explore parts of the building and different common spaces.

“The idea is that any model like 10 Sylvan can be brought into a virtual space,” Smith said. “You can put on your headset, you can view that model, but you can also have someone else from anywhere in the world log into that space and they can bring you on a tour through that space.” 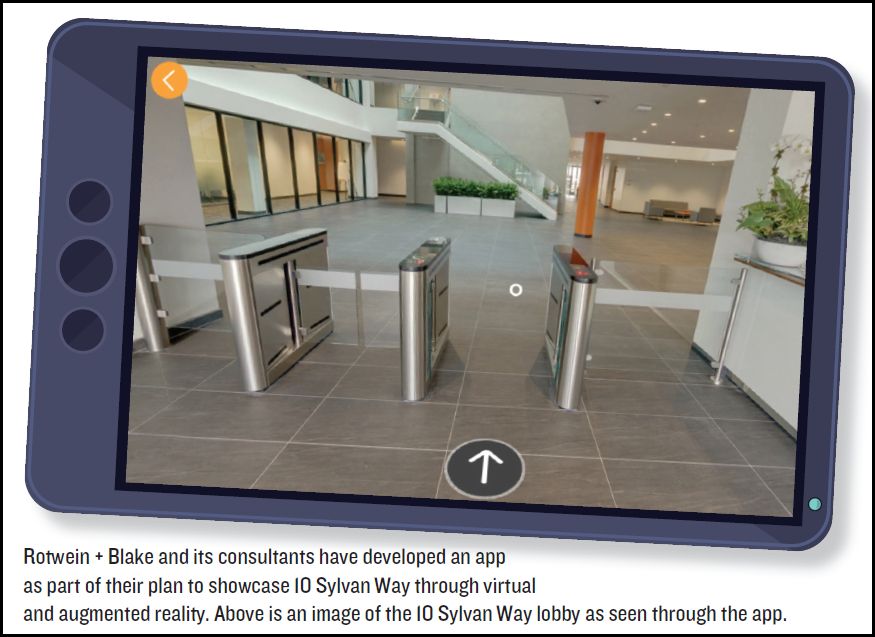 Once the firm begins to incorporate VR into its design process, Blake said any completed building can serve as a case study and a tool to help it generate new business. And he believes the technology can be useful in any asset class that Rotwein + Blake serves, from office and retail to multifamily and education.

Not to mention that Blake and Smith see a role for virtual and augmented reality in other parts of the development process, including engineering and due diligence.

It helps that Rotwein + Blake and other firms can tap into the technology for a relatively modest investment. Pricing for software can vary, but Smith said the hardware needs amount to a headset and a powerful laptop for client demonstrations and other functions, which can total around $2,000.

Blake added that he would expect the costs to drop as technology improves.

In the meantime, for the design firm, it’s a matter of convincing clients of the benefits so that they are willing to incorporate the models into the design process.

But he believes it’s only a matter of time.