At full build-out, Bell Works is projected to have more than 100,000 square feet of ground-floor retail and amenity space around what will become an indoor, urban-style promenade. — Courtesy: Somerset Development

It had been the ultimate “chicken or the egg” question for Ralph Zucker since 2008, when Somerset Development first showed an interest in repositioning the iconic Bell Labs campus.

Both retailers and office tenants would be key to transforming the building into a bustling, urban-style campus within suburban Holmdel, but which of the two groups would come first?

Zucker and his team got their answer last year, when a flurry of large, high-profile le leases helped fill roughly 70 percent of the available office space at what is now called Bell Works.

Suddenly, he said, the retailers that had been “looking and picking at the edges” are eager to seal the deal.

“Now you walk into the building and you see all of the different spaces being built out — over 600,000 square feet under construction, as we speak,” Zucker said. “So I guess the chicken was the office and retail is the egg, but now the egg is hatching and it’s really taking off.”

With at least 6,000 daily office workers set to occupy the building by next year, the effort to bring a distinctive mix of retailers, services and dining options to Bell Works is now well underway. That mix includes everything from a florist and a beauty salon to a 24-hour health club and an urgent care center, offerings that will serve both office tenants at the building and residents from the surrounding communities.

Led by brokers with Colliers International, the retail team had received commitments or was in the later stages of negotiations with about a dozen operators through mid-March.

Zucker said the building’s six-story atrium will serve as the focal point for the retail component, noting that “we were handed a great canvas by Bell Labs and (architect) Eero Saarinen.” The space is about a quarter-mile long and 100 feet wide, creating the opportunity for an expansive indoor promenade with about 100,000 square feet of total retail and amenity space.

“It’s this long, linear space covered by this incredible skylight,” said Zucker, president of Somerset Development. “And by doing what we said, which is peeling away the walls and creating retail and restaurants facing that middle core, facing that middle street, we’re really creating the heart and soul of Bell Works … that you would find in any great urban core.”

The 2 million-square-foot, glass-enclosed building, the home of groundbreaking research over more than four decades, became the largest vacant office space in the country when Alcatel-Lucent shuttered the property in 2007. Somerset acquired the site in 2013 following years of negotiations and public outreach with Holmdel residents, and the firm’s landmark redevelopment project vaulted forward last year when it attracted several large office tenants.

Chief among them was iCIMS Inc., a recruiting software provider that is relocating from Matawan and will occupy around 350,000 square feet at Bell Works. The firm is doing so with the help of a 10-year, $38 million tax credit and could ultimately have a presence of nearly 1,000 employees, the largest among more than three dozen tenants that have committed to the space.

Last month, Bell Works its newest lease, a 90,000-square-foot deal with Guardian Life Insurance Co. of America, which will occupy the space starting next year.

And while the retail component is still taking shape, Somerset began to set the stage soon after closing on the property. Zucker said the firm had to gut the atrium after Lucent, which had outgrown the office space on the perimeter and on the upper floors, had filled the middle of the building with cubicles, a library and other makeshift office space.

The atrium is now expected to become a hub of experience and amenities in the new-look building, according to Nancy Erickson, an executive managing director with Colliers.

“Everything about this and Ralph’s vision is about the experience,” said Erickson, who is heading the assignment with Kelly Bayer, an associate director with Colliers.

Along with a host of other services such as child care and a pharmacy, Somerset and Colliers are also in discussions with entertainment operators, although they could not be more specific for the time being. Another offering that will anchor the space is a grand food hall in the mold of a European-style market, which could offer a half-dozen different food concepts from sushi to brick oven pizza to tapas and wine.

Above all else, Erickson said the goal is to make Bell Works “its own unique, all-inclusive” destination that is distinct from both a mall and a traditional downtown. As such, the leasing team is curating the retail space perhaps even more selectively than most properties.

“I think the difference between this and another retail operation under a roof is there will be so much more to do here,” Erickson said. “You’re going to come here for more than one reason and you’re going to come over and over again.”

That approach is critical to drawing the other key constituency for Bell Works. Along with serving the daily office population, the complex is meant to attract the tens of thousands of residents in Holmdel and the surrounding Monmouth County suburbs.

Zucker believes the building will be a welcome alternative to traditional strip mall-lined highways in the area. But more than that, he feels Bell Works can be “the heart and soul of the surrounding community because everybody has a hunger for this urban core, this Main Street.”

“There’s a lot of wealth around us and there’s a need for a place to be, because the zoning in the communities around us … has always been more focused on residential and suburban pastoral feelings,” Zucker said. “So having a core to serve those communities and serve what’s around, we see it as filling a need in a market that has the disposable income and is looking for places to go without having to go all the way to city.”

With a growing roster of tech firms and plans that call for urban-style amenities, there’s no doubt that Bell Works will have a vibe unlike most other places in Monmouth County. 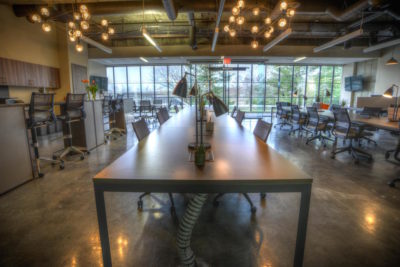 Maintaining that vibe is a top priority as Somerset Development fills out the retail space at the building.

“As individual shops come in, we’re curating and making sure to work with the different vendors that the vibe that we feel today will continue,” Zucker said. “And clearly everybody is attracted to the young entrepreneurial spirt, the tech spirit, the can-do spirit that there always was at Bell Labs and now exists at Bell Works.”

The project has a design team that includes a half-dozen architecture firms alone. Erickson said that has set the bar high for all of the operators that are being considered, for every type of business down to the bakery and the convenience store.

“Nothing is going to be straight out of a box,” Erickson said. “There will be unique design and colors that all follow the pallet that our designers at Bell Works have laid out.”