J&L Cos. has restored and converted a former garment factory in Newark’s Ironbound section to create Textile Lofts, a 64-unit apartment building that features a 12,000-square-foot, ground-floor co-working space operated by 3rd Space. – Courtesy: J&L Cos.

In 2016, a year after completing a 72-unit residential building in Newark’s Ironbound section, J&L Cos. turned its focus to its next major project — restoring and converting a historic garment factory on Green Street to bring another 64 apartments to the neighborhood.

But the firm faced “a big unknown” when it came to filling the building’s ground-floor space.

“Retail is a difficult business and a challenge for landlords,” said Jose Lopez, president of J&L Cos. “A failing tenant does not benefit us or the neighborhood, so we aimed to find a use that we know would not only succeed, but also add value to the residents and surrounding community.”

It’s why the developer has instead teamed with 3rd Space, a family-run co-working company that now operates a mix of private suites, shared desks, conference rooms and other spaces at the base of the building. The 12,000-square-foot, flexible office facility opened in May, serving to anchor the five-story building now known as Textile Lofts.

Both the commercial and residential uses have helped bring additional foot traffic to an aging, underdeveloped neighborhood just east of McCarter Highway and Newark Penn Station.

“This was our second project in four years on this block — we developed 115 Bruen in 2015 — so, as a landlord and developer in the community, we understand there is a local need for greater and better living options,” Lopez said. “The main key to a thriving city is population and we want to see more people living, working and visiting Newark, enjoying all it has to offer.” 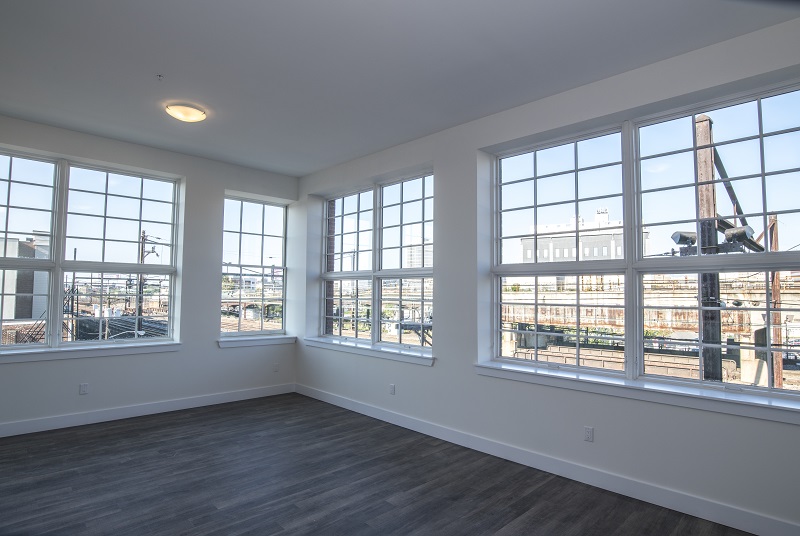 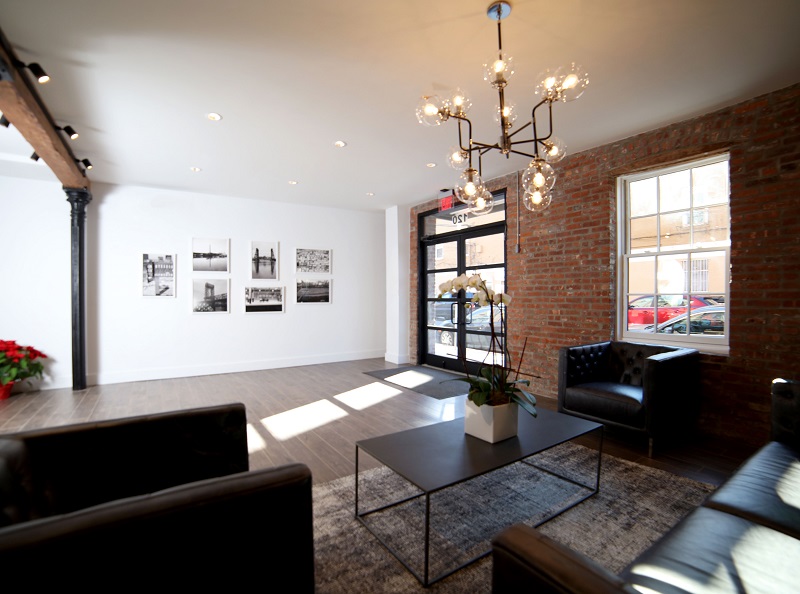 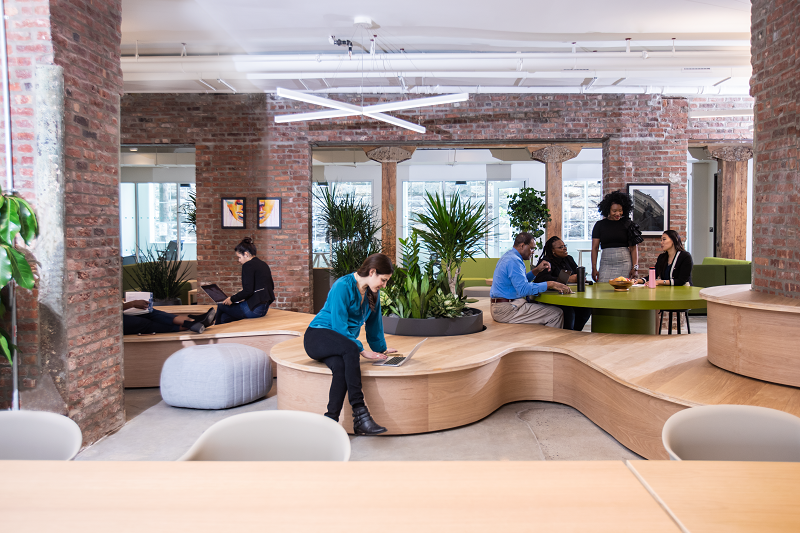 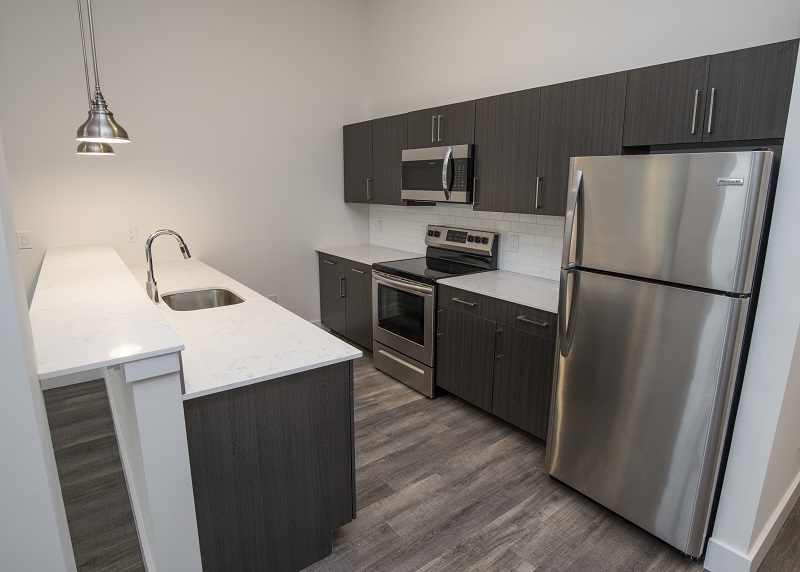 Originally built in 1835, the Textile Lofts building features exposed brick, wooden beams, large windows and many other historic details that appeal to both renters and commercial tenants. – Courtesy: J&L Cos.

Originally built in 1835, the Textile Lofts building features exposed brick, wooden beams, large windows and many other historic details that appeal to both renters and commercial tenants. The building’s heritage is also alluring to J&L Cos. and the Lopez family, a longtime landlord, business owner and parking lot operator whose roots in Newark go back to the 1960s.

The firm saw additional value in being a short walk from Penn Station and the chance to feed off the energy and diversity of the acclaimed Ironbound neighborhood.

“It has always been a live-work-play community, a neighborhood with a lot of hustle and bustle but where locals still know your name,” Lopez said. “I think that is what attracts a new generation of residents and professionals to the neighborhood. There’s culture and history, while being both convenient and authentic.

“On a personal level, the location is particularly special to me because I grew up in the Ironbound, went to school there and worked within three blocks of this property.”

The co-working venue, which has become a hub for entrepreneurs and community groups, also offers event space, flexible programming, a café and fast fiber. Meantime, J&L has made the building’s roof deck available to both residents and 3rd Space members, Lopez said, “which makes for a really dynamic mix of people and ideas.”

“We’re exploring co-living possibilities and other synergies between the building’s uses,” he said. “I think we’ve succeeded in curating an exciting space that can enhance the community long-term.”

All the while, renters have responded to the residential offerings at Textile Lofts. J&L opened the apartments last December and had reached 95 percent occupancy at the building by April, offering a mix of studios, one-bedrooms, two-bedrooms and duplexes with high-end interiors.

Lopez sees that response as proof of the need for new living options in the city. It has also validated J&L’s decision to preserve the building in order to deliver an industrial aesthetic, which “certainly wasn’t the easy route as the redevelopment itself involved a very complex construction process,” he said, but the adaptive reuse proved to be worthwhile.

“Given the building’s rich history, the apartments provide character and integrity that newer buildings simply can’t offer,” Lopez said. “We knew tenants would respond well to a thoughtfully renovated and well-located building like this one.”

J&L is particularly focused on the area surrounding Textile Lofts and 115 Bruen, its ground-up 72-unit project that opened in 2015 at the southern end of the same block. Lopez noted that the three blocks east of Newark Penn Station are “underutilized and fairly desolate,” making it a logical area for large-scale residential development.

Yet the firm has faced uncertainty about its next project in the neighborhood. A zoning ordinance adopted by the city council earlier this year permits developers to go as high as 12 stories for buildings around Penn Station, up from eight stories under the previous law. But a lawsuit by a group of Ironbound residents has threatened to overturn the zoning and has stalled J&L’s next project, a proposed 403-unit tower known as 55 Union, just south of Ferry Street.

Lopez noted that the litigants “stand against higher density in the name of sustainable growth and as a means to fight displacement,” but he also balked at that argument.

“I think this is shortsighted because, if we’re looking to reduce displacement from neighborhoods that are improving, the solution shouldn’t be to derail the construction of new housing, especially rentals,” he said. “We should be providing more — not less — housing, to accommodate new and current residents.

“No one is losing their home, especially not a condo owner,” he added. “Making it difficult to build when there is demand actually drives prices up and people away from Newark. The litigants claim that the rezoning does not benefit the community, but local businesses, existing and future renters and employers definitely don’t share that view.”

Lopez argued that the upzoning, known as MX-3, addresses concerns about sustainable growth by requiring projects to incorporate features such as public plazas, green roofs, gray water recycling systems and vehicle charging stations. He was also hopeful that the litigation would be dropped or dismissed soon, as “a few misinformed individuals have usurped the voice of the neighborhood and impeded progress.”

That progress is important to satisfying what he feels is pent-up demand for an expanded housing stock in the city and in the East Ward, he said. Look no further than the 50,000 students and 60,000 professionals who come into Newark each day, most of whom are commuters who leave at night.

“We want them to work and live in Newark by providing excellent housing choices as an incentive to stay here,” Lopez said. “Bringing more residents to the area will add desirable foot traffic around Newark Penn Station, boost retailers on Ferry Street and provide momentum for our public spaces like Mulberry Commons and Peter Francisco Park.”