With nearly 1,500 construction workers on site and more than $1.6 billion spent to date, the long-awaited American Dream project is on track to open by this time next year.

That was the message on Wednesday from Triple Five Group, the developer of the 3 million-square-foot retail and entertainment project in East Rutherford. Construction is now more than halfway complete, executives said during the Bergen Business Expo in Garfield, as they unveiled renderings of everything from the 16-acre, indoor water and amusement park to a $1.5 million flower installation that will be a destination for social media lovers.

“The power and strength of this site — of the Meadowlands — is something that I think has been undervalued for many, many years,” Paul Ghermezian, chief operating officer of Triple Five, told a crowd of more than 400 businesspeople. “I think we’re going to unlock that value.”

With $3 million in daily construction activity, the developer pointed to several signs of progress at the site: Crews have raised the steel for what will be a DreamWorks-themed water park at Route 3 and the New Jersey Turnpike. Interior layouts are nearly complete. Mechanical and electrical work is expected to begin in the coming weeks.

Not to mention that Triple Five, which took over what was a failed project from a previous developer, is well on its way to replacing the notorious multicolored exterior that has long been visible to drivers on the surrounding highways.

At full build-out, American Dream is slated to include more than 400 retailers, restaurants and services, including luxury anchors such as Saks 5th Avenue and Lord & Taylor. Ghermezian noted that Triple Five required its retailers to operate “flagship” locations at the complex, meaning a focus on new in-store experiences, exclusive products and atypical layouts.

Plans also call for a central court that will be programmed with more than 400 events annually, he said, along with a flower court that will be a focal point for the shopping space. Triple Five plans to spend $1.5 million on the initial flower installation, which will be changed seasonally.

He also touted plans for a champagne and caviar bar, plus an expansive food and dining component that will include more than 100 eateries, over 20 full-service restaurants and other distinctive options such as a kosher food hall.

Triple Five has secured commitments for about 80 percent of the leasable space.

“Our building consists of something for everybody,” Ghermezian said.

But in describing the retail and dining amenities, he also emphasized that American Dream will be 45 percent retail and 55 percent entertainment. That is a far cry from Triple Five’s other flagship properties, the West Edmonton Mall and the Mall of America in Minnesota, which are 80 percent retail.

American Dream’s entertainment component will include a 180,000-square-foot indoor skiing experience operated by Big Snow America, a permanent Cirque du Soleil performance and an observation wheel. The property’s highly touted waterpark will be built inside of glass dome with an eight-acre footprint, which will open alongside a sprawling Nickelodeon theme park.

Construction resumed last summer after Triple Five assembled nearly $3 billion in financing to complete the project, including the sale of $1.1 billion in tax-exempt bonds and a $1.67 billion construction loan. The milestone brought new life to a notoriously delayed project that has seen various setbacks over the course of more than a decade.

The Edmonton-based, family-owned developer took over what was then known as Xanadu in 2011 and has enjoyed broad support from former Gov. Chris Christie, along a commitment for a $390 million reimbursement grant under the Economic Redevelopment and Growth program.

Triple Five is banking on the 25 million people that live within a 50-mile radius of the Meadowlands Sports Complex, along with the tens of millions of people who visit the region every year. For both the West Edmonton Mall and the Mall of America, the customer base is split evenly between locals and tourists, executives said, although tourists account for about 60 percent of the spending. 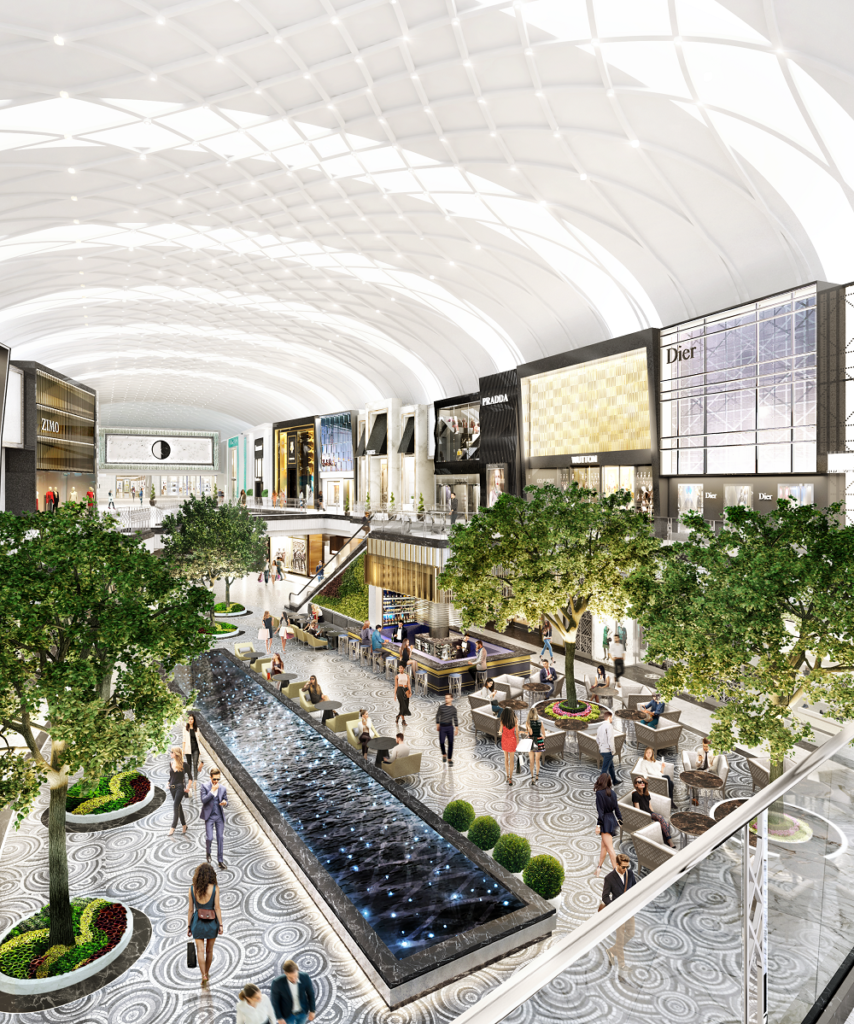 Tony Armlin, Triple Five’s vice president of development and construction, said there will be about $90 million worth of construction activity at the site in May. Contractors have been running two shifts daily, which could increase in the coming months as the total headcount grows from 1,500 to 3,000 by the fall.

“The project is coming together beautifully, “Armlin said. “And we’re so fortunate to be working with great local contractors, (J. Fletcher Creamer & Son Inc.), and many others who have participated in the project.”

Both Ghermezian and Armlin said they expect the project to have a ripple effect on the Meadowlands, thanks in part to their past experience. In recent years, Triple Five alone has built 1,000 hotel rooms around the Mall of America property, before accounting for hotel rooms built by outside developers.

“There will be enormous amounts of development generated around the periphery of the property as well as on our property,” Armlin said. “So this is a region-wide development. It will become an economic engine.”

How have some local governments changed their approach to development since the downturn?